Shortly after our first game of Sellswords & Spellslingers my brother asked for another one. First we had a tough choice to make – do some research into the use of the mythical skeleton key Grystal found in our last adventure or should we investigate the fate of our comrade Marius whom we had to leave for dead last time?

We decided to be heroes and do the latter. Find out if Marius was still alive and if so where the brigands had brought him so we can stage a dramatic rescue. See what I did there with the “More”-jump. Cliffhangers!

First though we had to go about the Campaign Phase of the game. For a closer description of this phase between games, please refer to my review of Sellswords&Spellslingers.

Grystal led the remaining two other heroes into a shady tavern in one of the worse parts of town. Officially to plan Marius’ rescue. However, Grystal paid little attention and kept leering at a table full of small-time gamblers. “You aren’t considering gambling, are you?”, Henni asked cautiously. “The way I do it it’s hardly a gamble.”, the elven Mage replied without taking her eyes off the gambling table. “If you’re not cheating, you’re not trying”, Monty Indigo gave Henny a wink and a nudge. “I’m not cheating, I’m just smart”, Grystal hissed. “Same diff’rence.”, claimed Monty and took off to do some pick-pocketing.

He wasn’t any successful that night, but he didn’t get caught either. Grystal, after carefully calculating the odds, put on her loveliest smile and joined the gamblers. At the end of the night she doubled her investment and got several free drinks. To even out the group’s Karma Henni did some patrol duty for the city guard and made a handful of honest silver coins.

Since we decided to rescue Marius the Drunkard we first have to find out if he’s still alive and if, and if so, where to the Brigands have taken him.
At last night’s gambling Grystal made the acquaintance of Derek Dunkelschummler, a dark elf ranger. He claims to be a capable tracker and, in return of having his gambling debts with Grystal taken care of, offers his services to the group.

Derek Dunkelschummler is armed with a crossbow and a sword. He is acrobatic and has the combat dodge traits.

The heroes approach a Brigands group’s camp. There are five Clue Markers strewn across the camp. The heroes have to grab as many of the clues as possible and get them off table for analysis. The more they find the more they’ll know what happened to Marius (and the more XP they get at the end).

Here’s the table layout: Clue markers are marked in yellow, the heroes enter from the red table edge in the bottom. 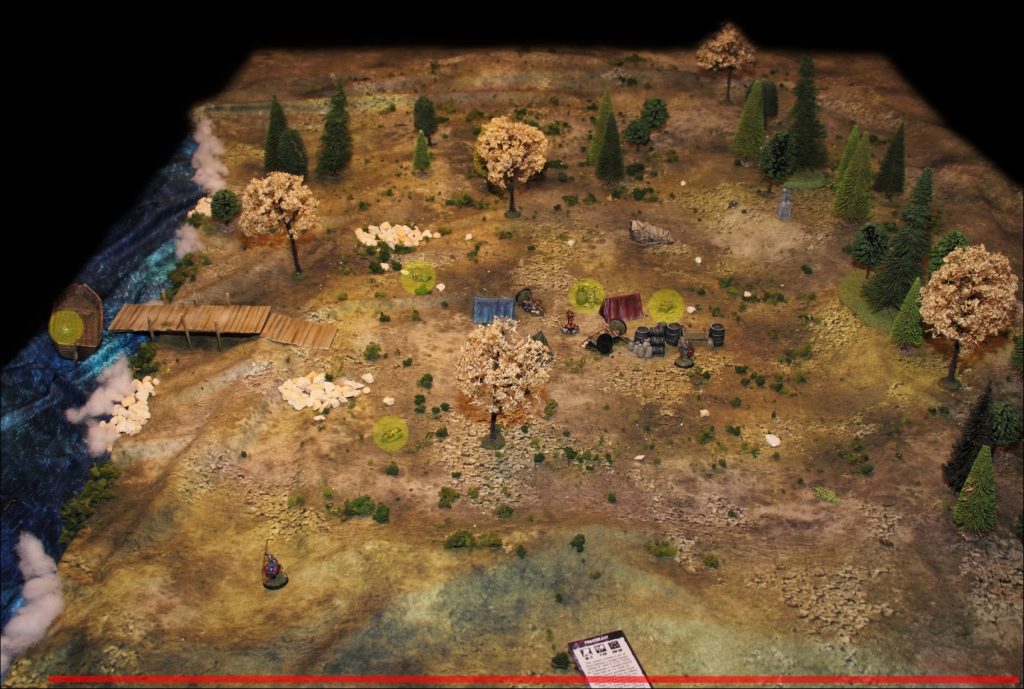 The boat in the mountain stream isn’t very well moored (here’s a word I did not know) and might get unmoored (might as well get some mileage out of it) and drift off the table, along with the clue. So our heroes should act swiftly to get their hands on this one.

Disclaimer: The not-very-well-moored-boat-with-clue-on-it is a thing I nicked off a scenario I played with Cpt.Shandy a year prior. It’s a handy way to get a scenario event in and a good excuse to add some tension (and water) to the scenario.

In the beginning of the game there are two Mountain Brigand sentries and three more Brigands sleeping in the camp. They would wake up the first time they get activated.

We start the game in good spirits. My brother brought some new D20 for this one, and they roll better than the ones from the last game (which got ground up, dissolved in Acetone, and strewn into the Danube after the last game).

Okay, the sleeping brigands instantly jump up as soon as we get on the table, but Grystal  frostblasts away at them, Derek proves to be a good shot, and Henni sprints forward to secure the first clue. 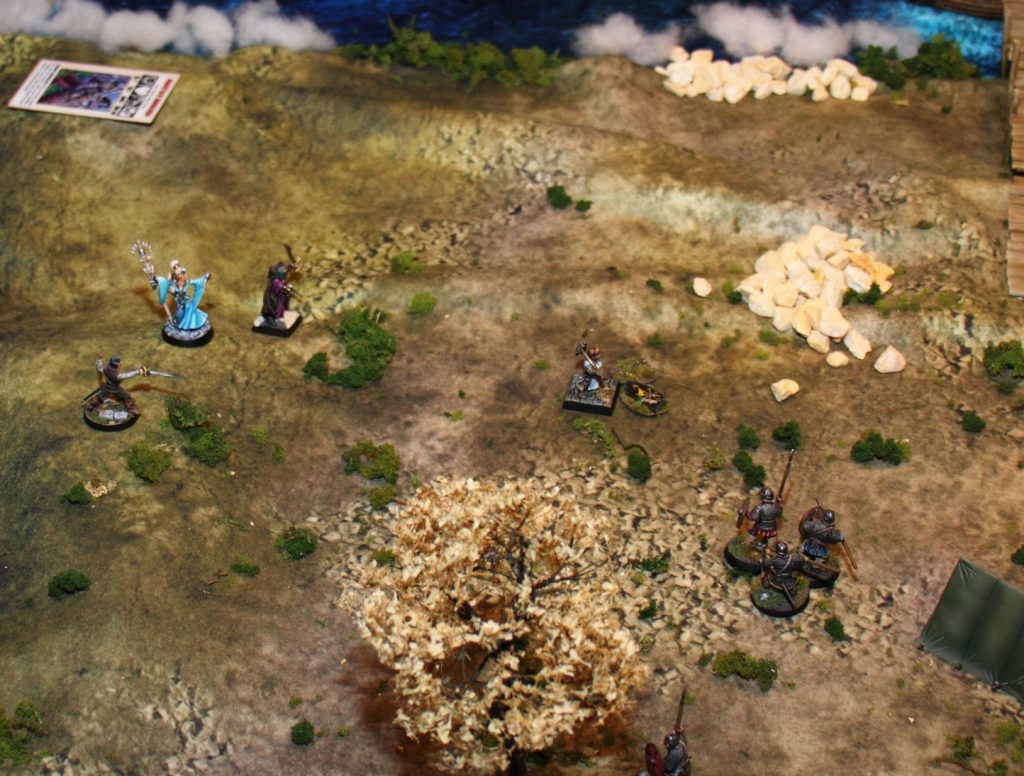 In the picture you can see the horde of three formerly sleeping and now surprisinly spry brigands.

Then two large groups of brigands show up at our table edge. 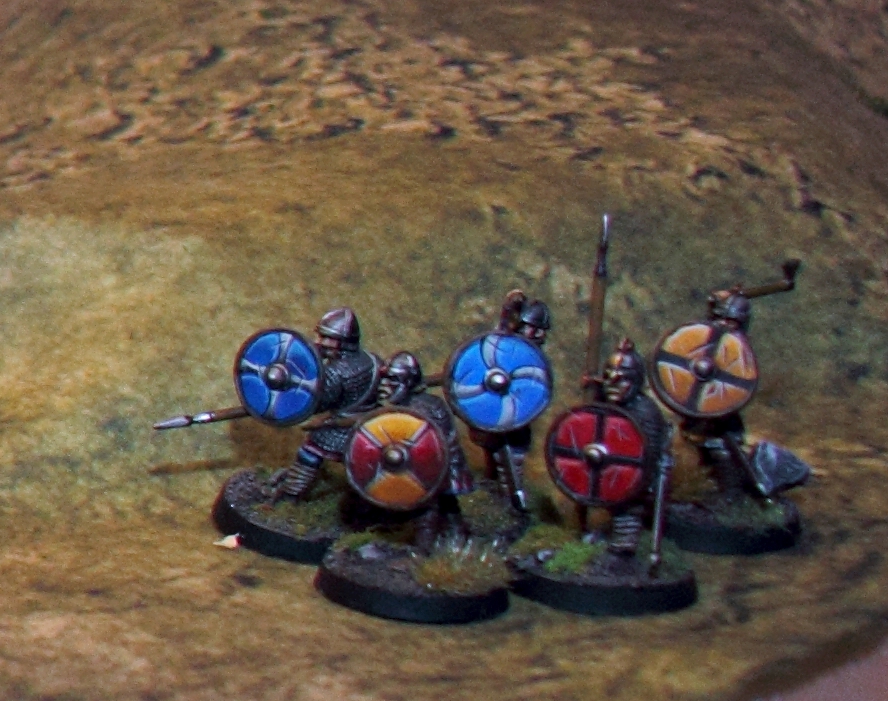 One of them pretty far away, but still problematic. The other one basically right behind us. Now we’re facing a choice – run off to the clues, get distance between us and the brigands and shoot them down or face the first group now so later we don’t have to deal with both groups at once if the shooting shouldn’t work that well. 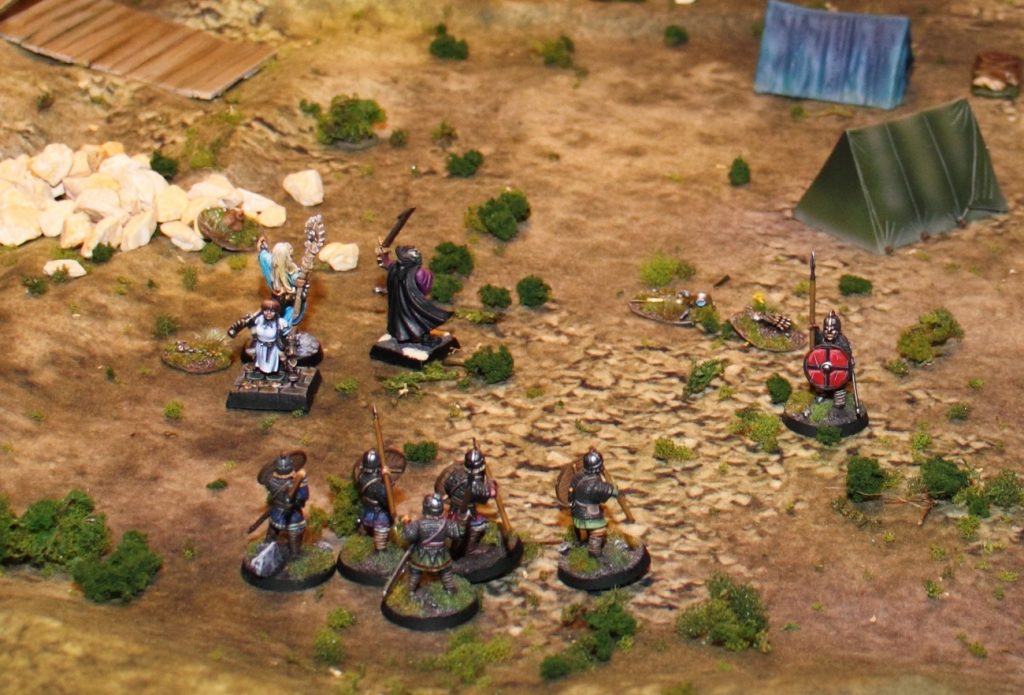 We decide to do the latter. Henni heroically throws herself into the horde. Since there’s several more hordelings than friendlies involved Grystal and Derek may fire into the mêlée without danger of hitting their comrade. 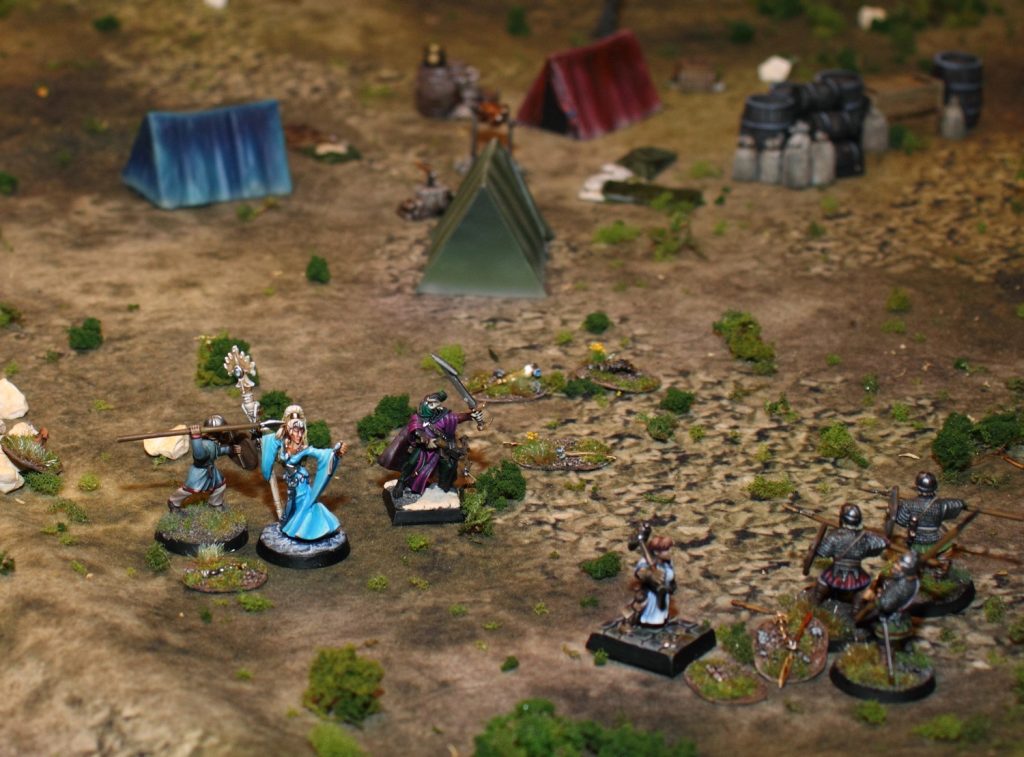 A bloody fight ensues and our heroes just barely manage to kill off the brigands. Henni gets gravely wounded in the process. At one point she sinks to the ground and Grystal pulls her to her feet again. For a second time the Tough trait saves her. Instead of being comatose she gets up with 1HP and all sorts of mali on everything (including having her move speed reduced to a 1″ stagger). Grystal gets ambushed by a sneaky brigand, but manages to fight him off.

While all of this is happening Monty is sent forward toward the boat to get the clue off from there as the boat slowly starts drifting away.

He swiftly makes it to the pier, takes a run-up and leaps! 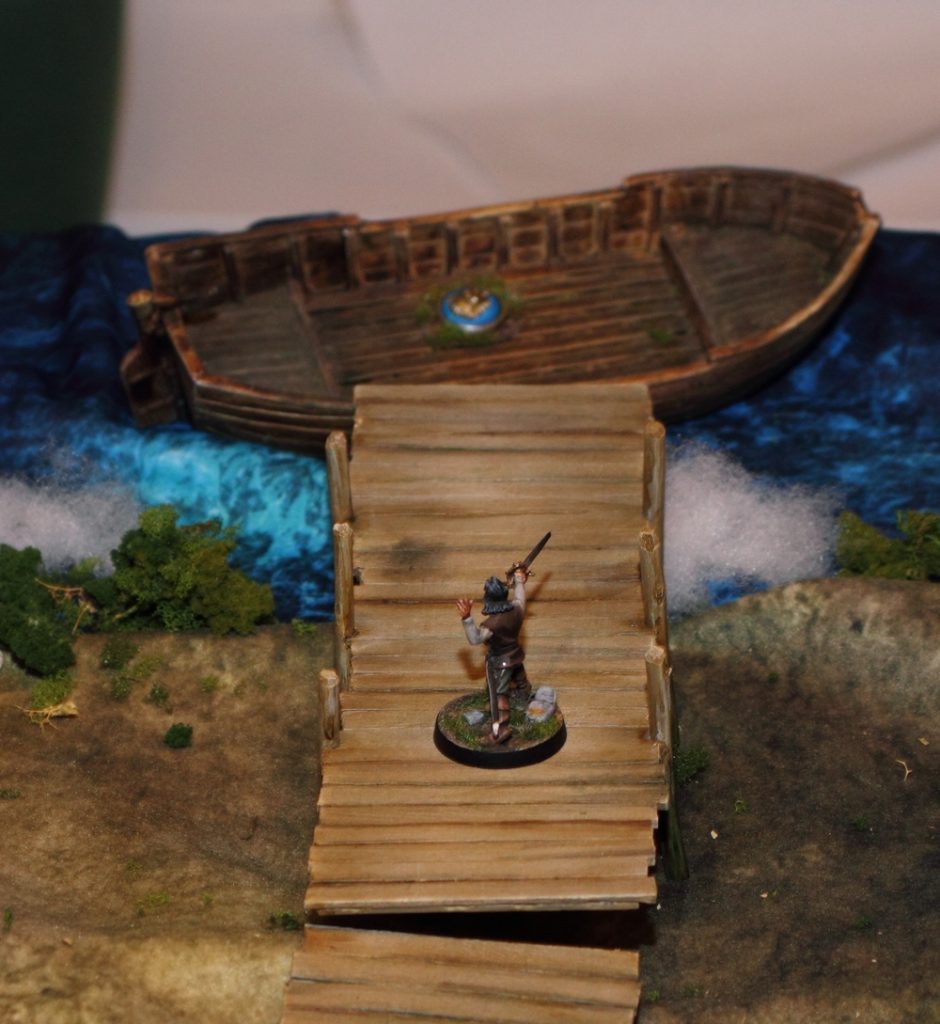 *splash* Monty missed the boat by half a metre as it drifts. 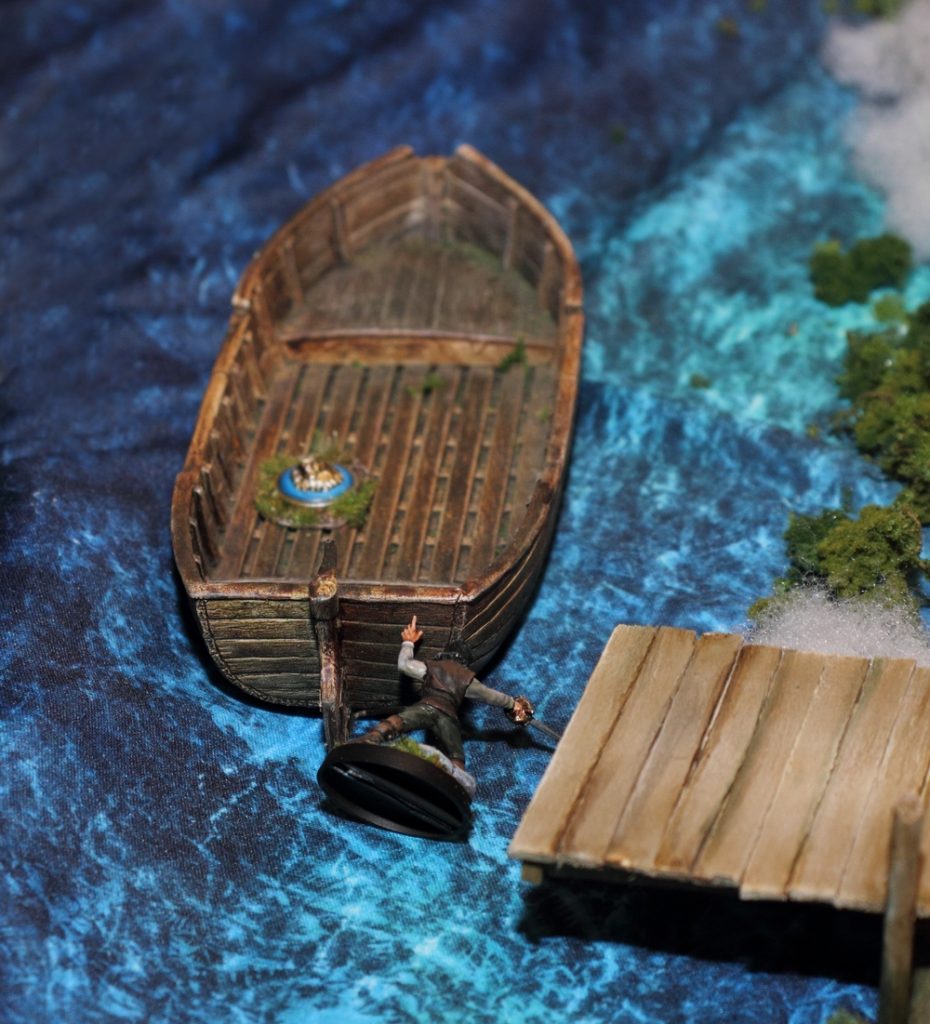 He barely manages to get a grip on it though and after a while pulls himself on board.

Here’s an overview of this phase of the game: 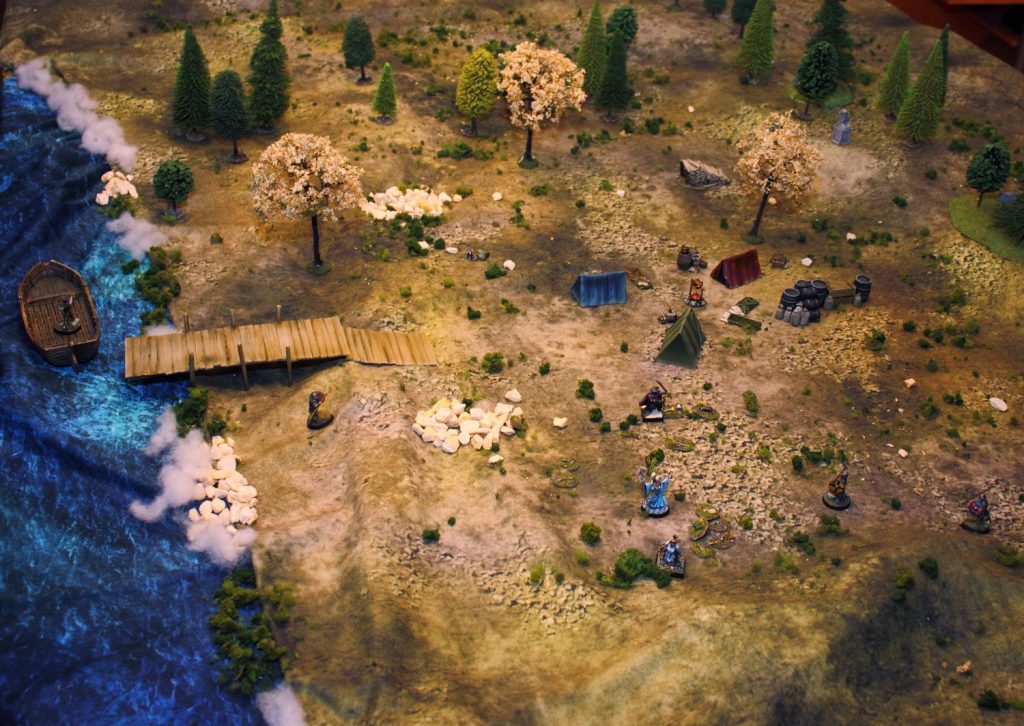 You can see Monty (who grabbed the clue at this point) drifting off in his boat. In the centre you can see the wounded Henni , Grystal making ready to blast another brigand, and Derek takes off to secure a bunch more clues in the camp.

Since all the most immediate dangers have been taken care of (and Henni is trying to hobble off the table) we get a bit greedy and decide to grab all of the clues.

First, Monty tries to get off the boat before he drifts off the table. Another run-up, another leap…

*splash* He stumbles straight off the boat and falls into the water. After a while he manages to swim back to dry land as the boat is carried off. 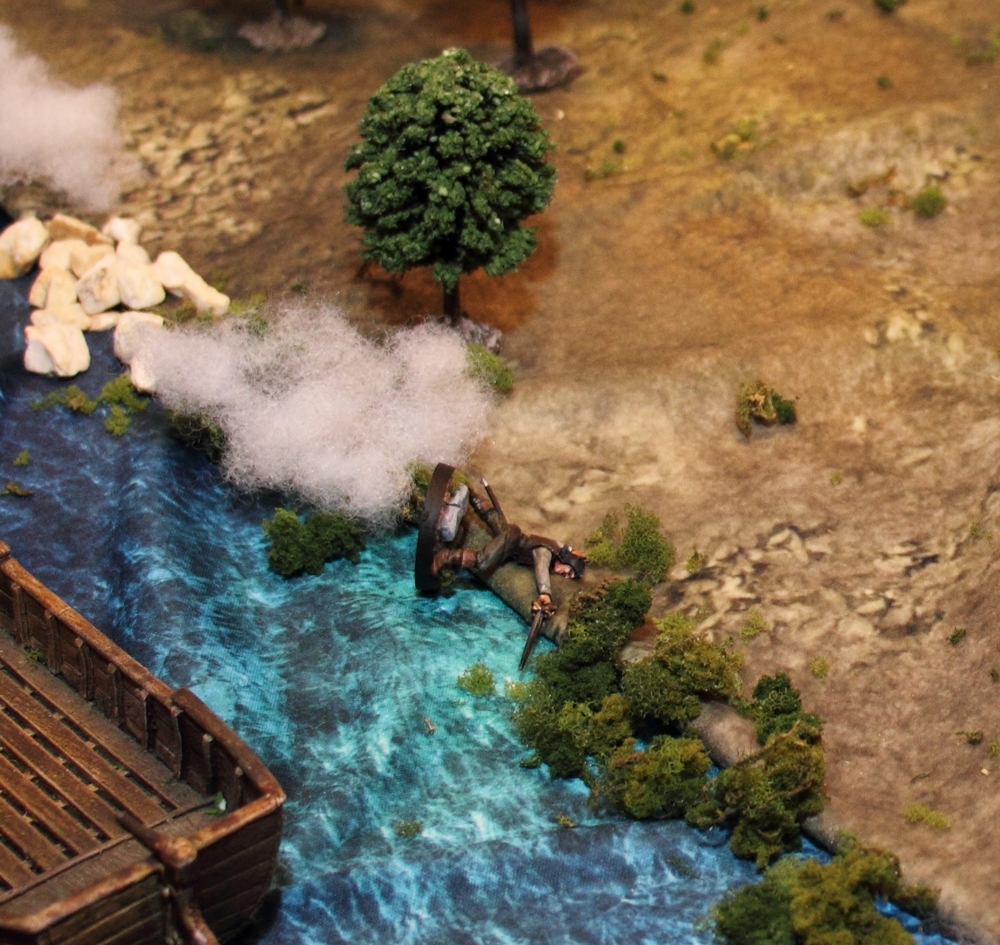 Meanwhile another group of brigands appear at our table edge (albeit pretty far off for now), along with an old friend who makes a return. 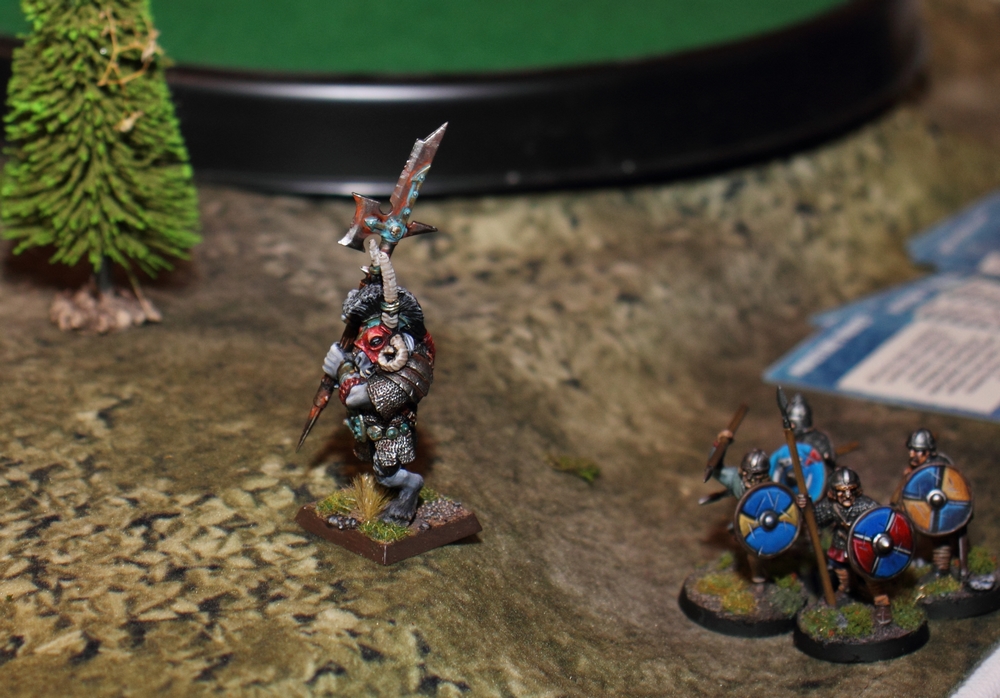 They advance toward Henni (who tries to get off the table) and Grystal (who covers her). 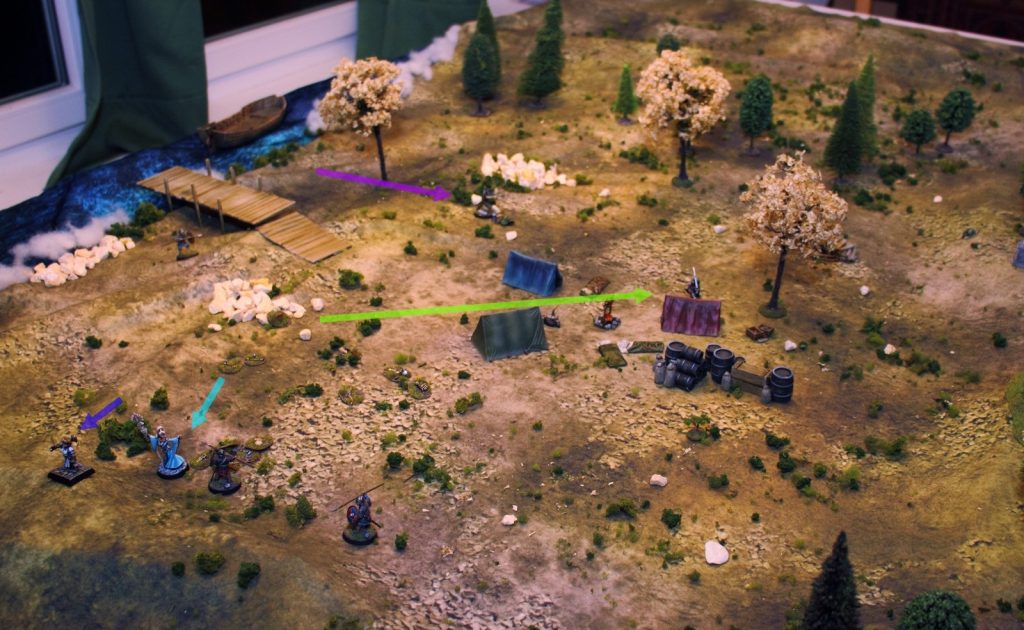 Monty and Derek rush from one clue to the next to pick them up. Henni slowly moves to the table edge, Grystal frostblasts single brigands.

…until she runs out of magic power. Now things get tricky.

Henni is slow to move (even more so than usual) and ever more brigands close in on her and Grystal. They decide to take a stand. 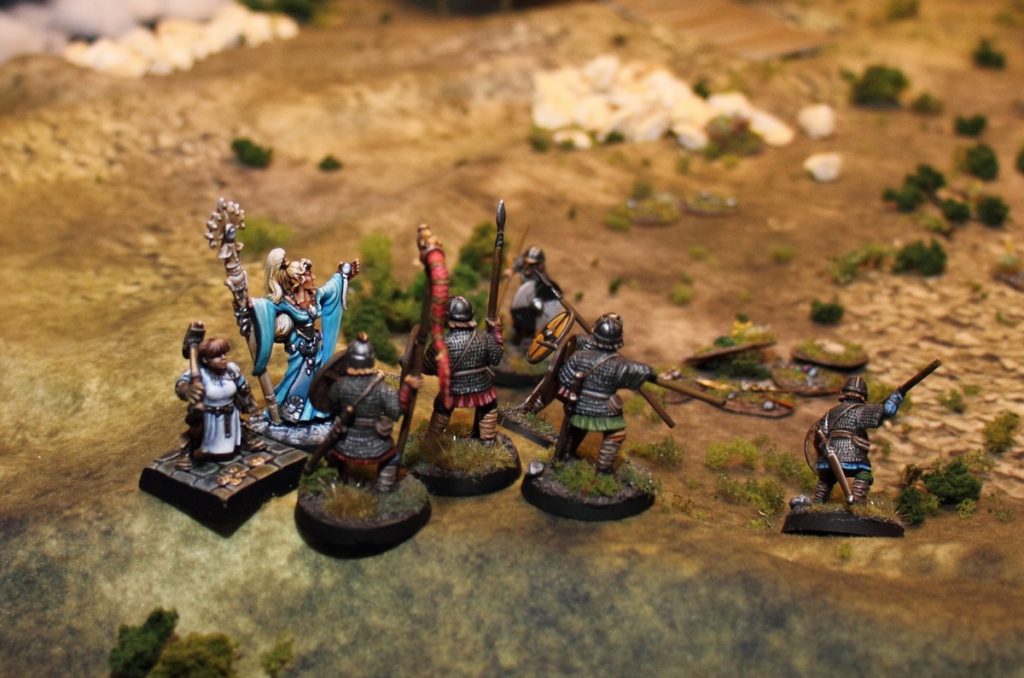 Meanwhile Derek is ambushed by another big brigand who crawls out of one of the tents just as the dark elf picks up the last clue. After a short and impressive duel Derek goes down. Monty, who came just moments too late to help, gets ambushed by yet another brigand and is knocked out as well. 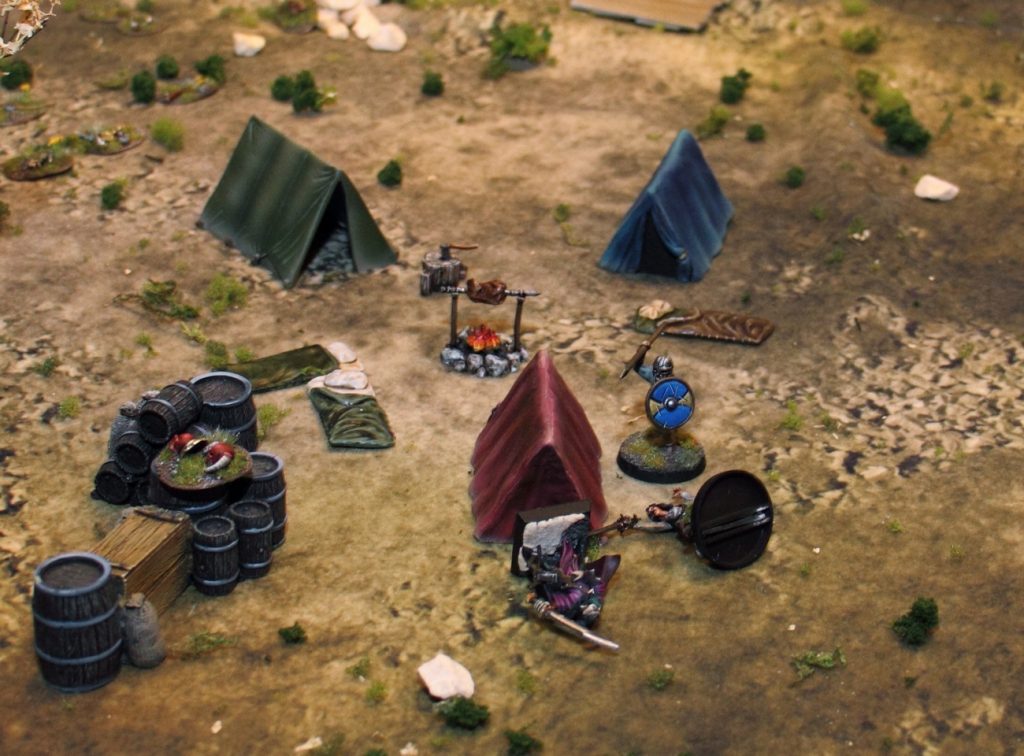 Back at the other end of things the situation is almost as grim. Henni (1HP and gravely wounded) and Grystal (1HP) barely keep the horde in check. Suddenly Grystal pushes Henni in front of her. “There’s always a plan B. You’re on your own, little one.”. She turns to run off and leave her comrade to her fate, but a brigand’s spear impales and outright kills Grystal. 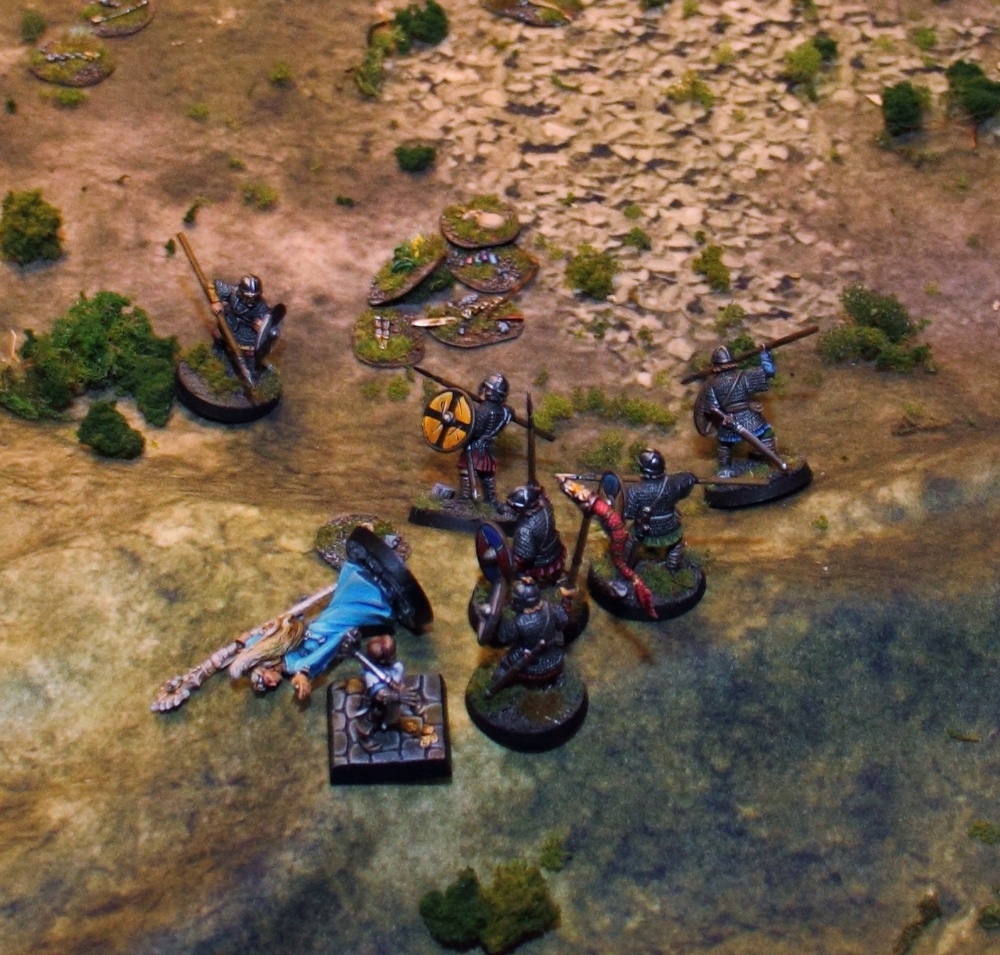 Shocked by the events, Henni kills two more brigands. Eventually she is overwhelmed herself and with the words “Why, Grystal, why?” Henni falls unconscious. 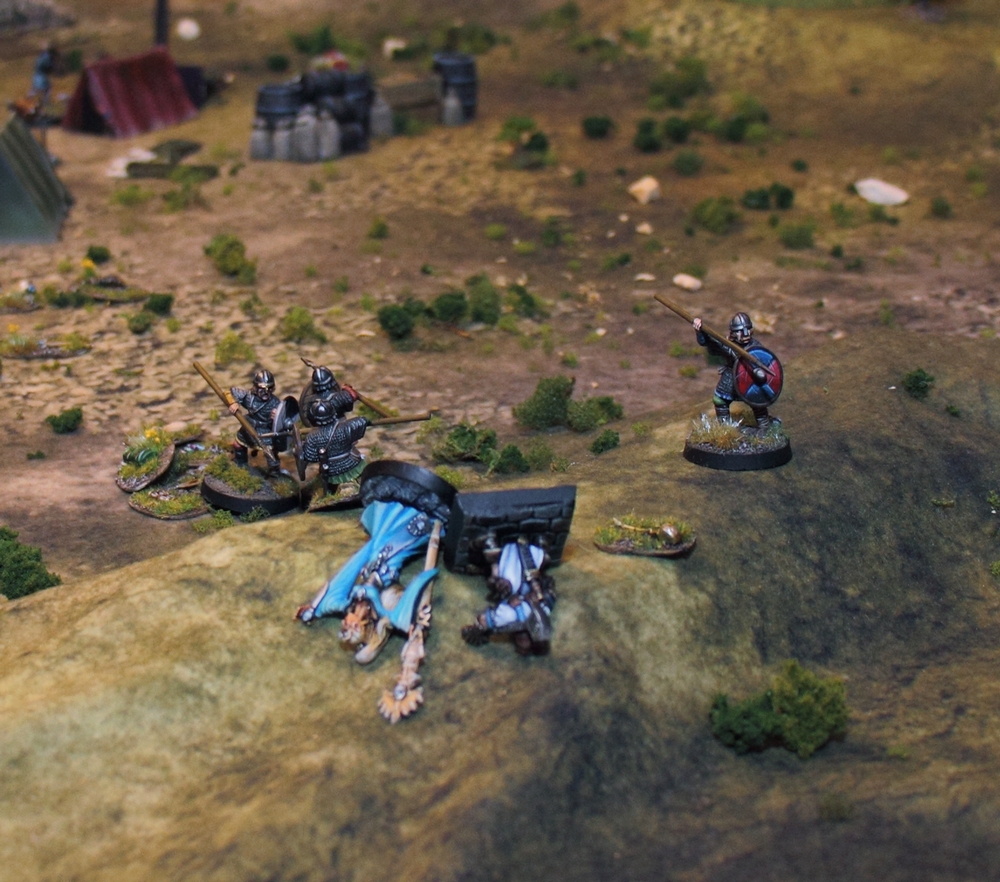 Well, that didn’t go according to plan. Sometimes the bad guys win, I suppose. We could have been much more successful if it hadn’t been for these large groups of brigands spawning right behind us. Either way, things looked good from the beginning. Ranged fighters are really useful, the spells mostly worked fine.

Despite their Danger Level of 7 these brigands are pretty tough to play against. From reading scenarios I often wondered why many made use of relatively unimpressive foes such as goblins. The thing is that in Sellswords&Spellslingers there potentially are lots of enemies, and as soon as they manage to gang up on someone they get nasty.

Monty Indigo’s side adventure with the boat was very amusing, and it’s just fun when things go to plan. And then it’s fun as usually things completely go awry and the “let’s just get off the table” part starts. Which would have been an option at one point, but I was too much into getting these clues to make the sensible retreat. At least this way we got Grystal’s character moment, followed by instant karma to the face (or back, rather).

Anyway, I suppose this is the untimely end of the adventures of Henni Hinkel von Hammerfels, Grystal, Monty Indigo and Derek Dunkelschummler. At one point we held all five clues, but didn’t manage to get them (or us) off to safety.

Yeah, by the way – the minotaur didn’t make it into combat this time either. I assume he’s getting paid by the hour rather than by damage dealt.