Things didn’t go so well in our last Sellswords&Spellslingers adventure, so we were forced to make up a new band of rogues / glorious heroes and have another go at turning them into legends!

Last time we chose from stock characters of roughly 20XP each which I had made up on the fly. Now that my brother was familiar with the rules (and after we got pummled pretty badly) it was decided to go strictly by the book with this new group of adventurers. 60XP per player. All we stuck to was 2 characters for each player. 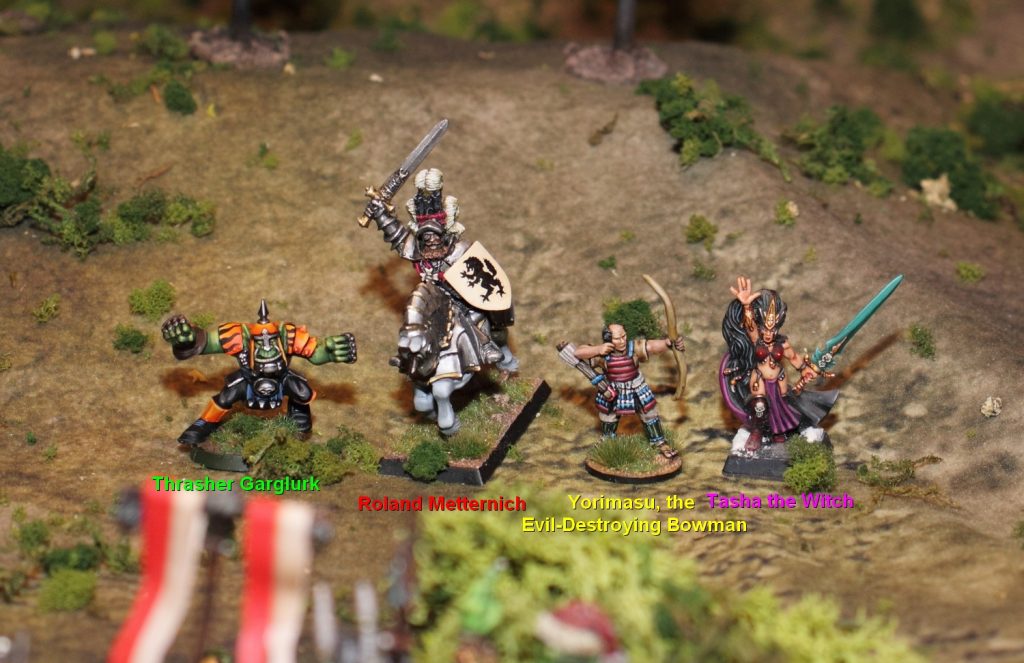 Thrasher Garglurk was a promising new Blitzer with a big fat contract with the Orcland Raiders. Unfortunately he failed a drug test (by not having ingested the required amount of drugs to pass for a Blitzer) and in a tiny moment of bad judgement knocked out three referees, set the locker room on fire and stole a keg of fungus beer. With his career in Blood Bowl probably finished he’s on his way out of town and in need of a job.

Thrasher is a capable brawler (Martial Arts, Fighter II (Fists), Martial Block), still wears his Orcland Raider uniform (because he had to get out of there really, really quickly. Armour II) and is an Impulsive fella.

Roland Metternich is the third son of Meinreich Metternich and by now last of his lineage. Once a powerful noble family, the Metternichs lost most of their land and riches by risky investments and a legendarily extravagant lifestyle. Roland owes a lot of money to a lot of people, but recently received a letter from a mysterious source from a land far away that a remote uncle of his passed and left him a sizeable chunk of money. In return the sender of the letter only asked for a few gold coins to have the riches sent to Roland right away. Roland is no fool, so he know that the people he owes money to will only take this rightful inheritance away from him as soon as it arrives, so Roland (he’s got nothing to lose anyway) decided to pay a visit to that far away land and pick up the heaps on money in person. Travelling is dangerous though, so he spent his last few coins to hire Thrasher, Yorimasu, and Tasha as his bodyguards and travel companions.

Roland, a Burly chap, rides into battle on his trusted warhorse (Riding), wears his ancestor’s plate armour (Armour II) and wields his old family’s sword and shield (Shield, Safe Retreat). Back in his youth he greatly enjoyed studying an almanach full of pictures of human anatomy. (Healer I) Of course he is the Leader of the gang.

Yorimasu, the Evil-Destroying Bowman, stems from the far away lands of Nippon. One of the most capable bowmen of all the parts of the world that count (Nippon), he was disgraced by a cramp in his arm at the finals of an archery competition. Looking for a chance to reestablish his honour he travelled to the Western Empires of the Old World. After witnessing the popularity of firearms throughout the Empire he seeks to repopularize the bow as the only true way of lobbing bits at others with deadly precision. This, so he thinks, will restore his honour.

Yorimasu is armed with the Evil-Destroying Bow and is good at shooting arrows with it. (Archery II, Sniper). Also, he’s a Hero.

Tasha the Witch is a spell-wielder from Ghrond. In a drug-induced vision she was told by an ancestor of an ancient grave containing ancient spells of ancient powers. As everybody knows, the more ancient spells are the more powerful their ancient powers are. The vision showed her the image of a mystical skeleton key held by an Elven sorceress who failed on her quest. Now Tasha is out to get her hands on that artefact to become the wielder of the most ancient of magic powers.

Tasha is a right witch (Spellcaster, Spell Mastery I) and a proper smart one (Smart II). She isn’t used to the warmer weather around these parts (Weak).

Right after Roland assembled his extremely diverse group of companions he (and Thrasher) were extremely keen to get out of the city as soon as possible. After all, several kinds of authorities and debt collectors are after them. To get rid of their pursuers, the group decided to travel through the deep forest. Little did our heroes know that these forests are infested with beastmen who littered the escape route with traps to capture and enslave travellers.

Our heroes’ only choice is to move head on through the forest to the North to escape.

This is scenario#1 from the Sellswords&Spellslingers rulebook. It’s a really useful and fun scenario you can throw in at any point in a campaign really if characters have to get from A to B.

The heroes begin the game at one table edge (red) and have to move to the other (green). At the start of the game we have a horde of beastmen warriors on the table and four larger and more dangerous beastmen brutes. There’s a Green Troll on the table as well who holds extra loot and most of all a spell scroll (which he can’t use, but can be looted).

We start with a beastmen brute tooting right in our faces. 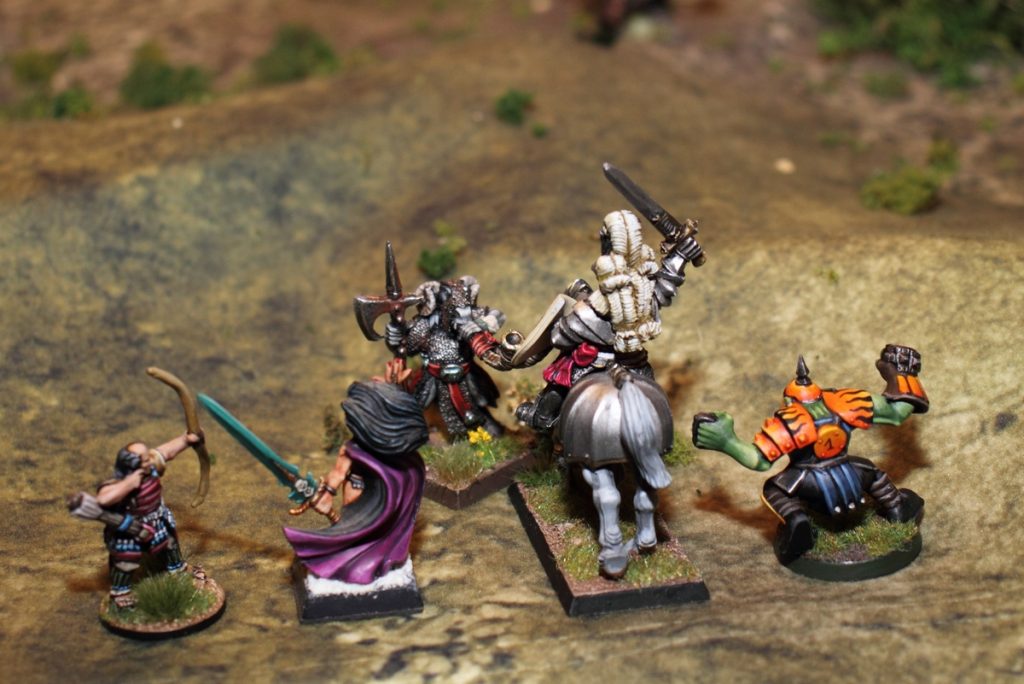 Tasha disapproves of any music but the kind she likes and throws a magic bolt at the savage, costing the creature one hit point. It charges at Roland, who fends off the attack (another HP gone off the brute), and with a mighty right swing Thrasher knocks the brute down. 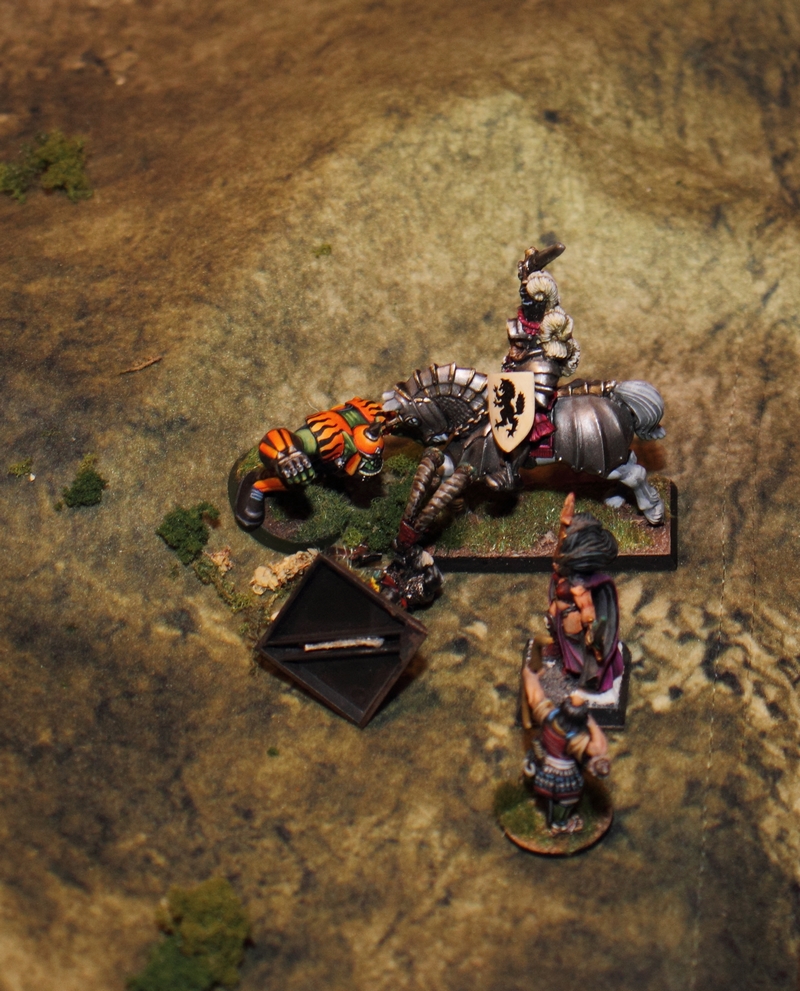 So much for the new group’s baptism of fire. With a sense of incredible potency they move on and Tasha order for the Troll to be slain so she can get her hands on that spell scroll. 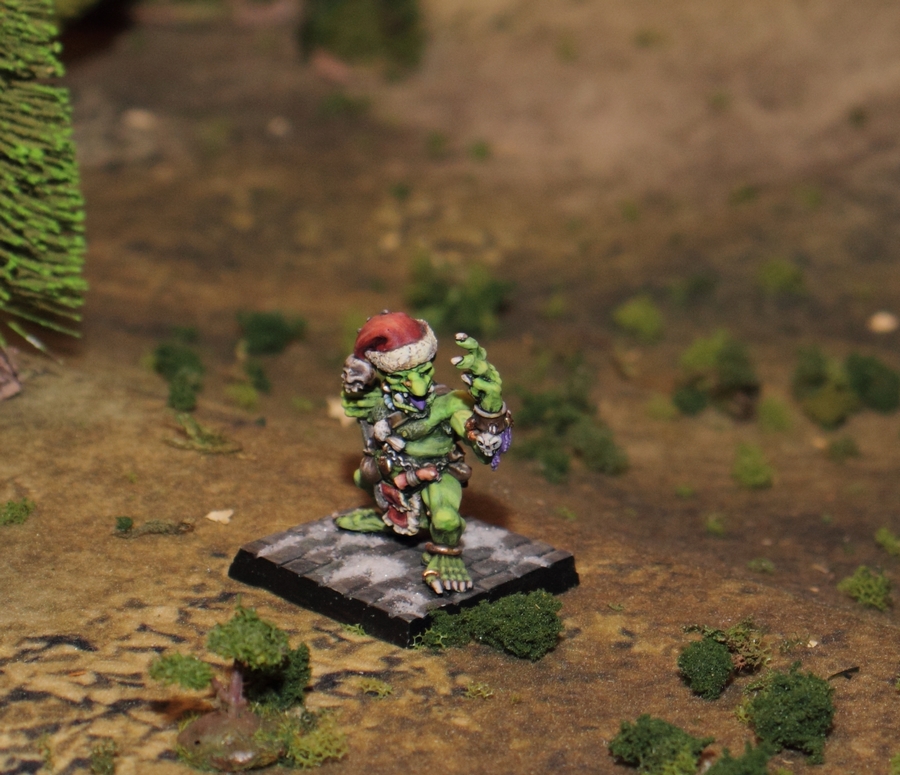 Now these trolls are kind of problematic. They are incredibly dangerous if they get in close combat. They are incredibly tough AND regenerate. What works in our favour is that they are pretty susceptible to ranged and magic attacks and at the same time are woefully unaware of their surroundings, so they’ll stuble about unless we don’t get too close. It’s worth a shot, Yorimasu muses, and a quite honorable thing to slay the big green monster.

Thrasher volunteers to run ahead break through the beastmen’s lines and keep them away from the Tasha and Yorimasu. He trained as a Blitzer after all, so this is natural to him.

Tasha and Yorimasu open fire at the troll who takes some damage. He’s not sure what exactly the matter is, but he seeks cover, just to be sure. 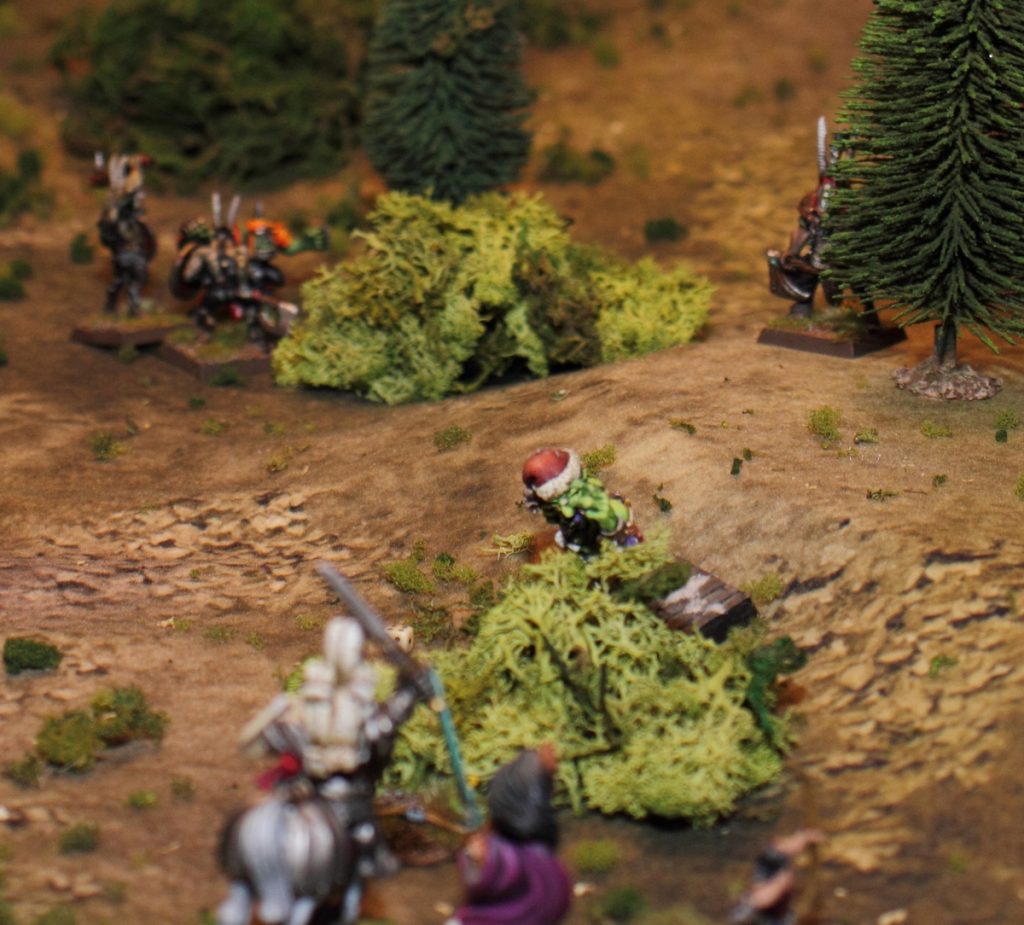 In the back you can see Thrasher, making short work of a horde of beastmen. Roland stays around with Tasha and Yorimasu to help out if necessary.

Here’s an overview of the situation at this point of the game: 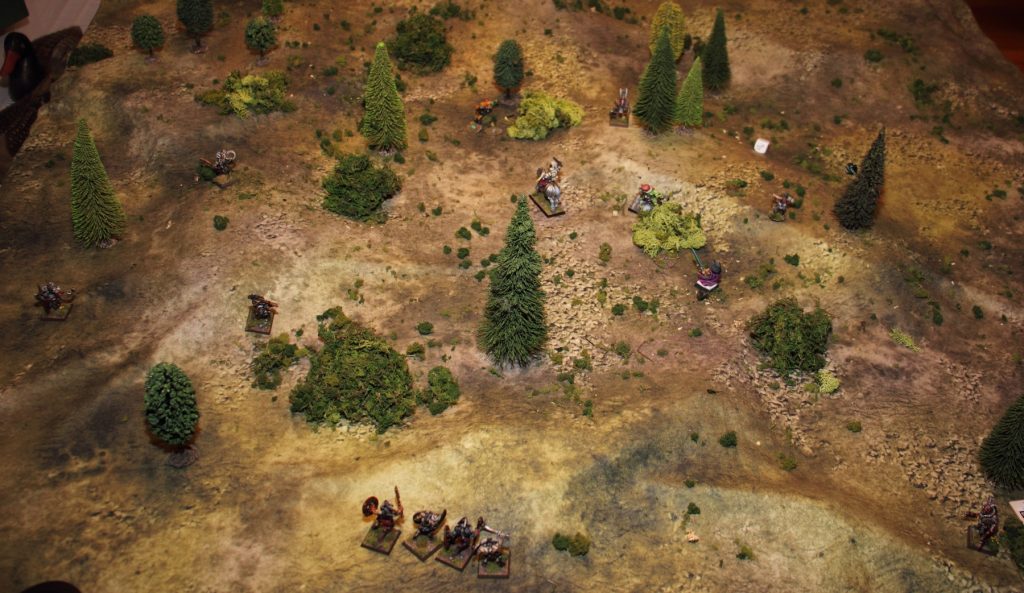 In the centre we got Roland who tries to support the group with his Leadership skills. At the top we see Thrasher surrounded by loot markers left behind by the knocked-out beastmen. In the right around the troll you can see Yorimasu (on the little hill, trying to flank the troll) and Tasha, throwing magic darts at the troll behind the impressive bush.

In the bottom of the picture you can see a horde of beastmen trying to catch our heroes. same with another brute in the bottom right. Along with all the enemies showing up in the back of our heroes (to chase them into the traps, no doubt) an old friend shows up as well… 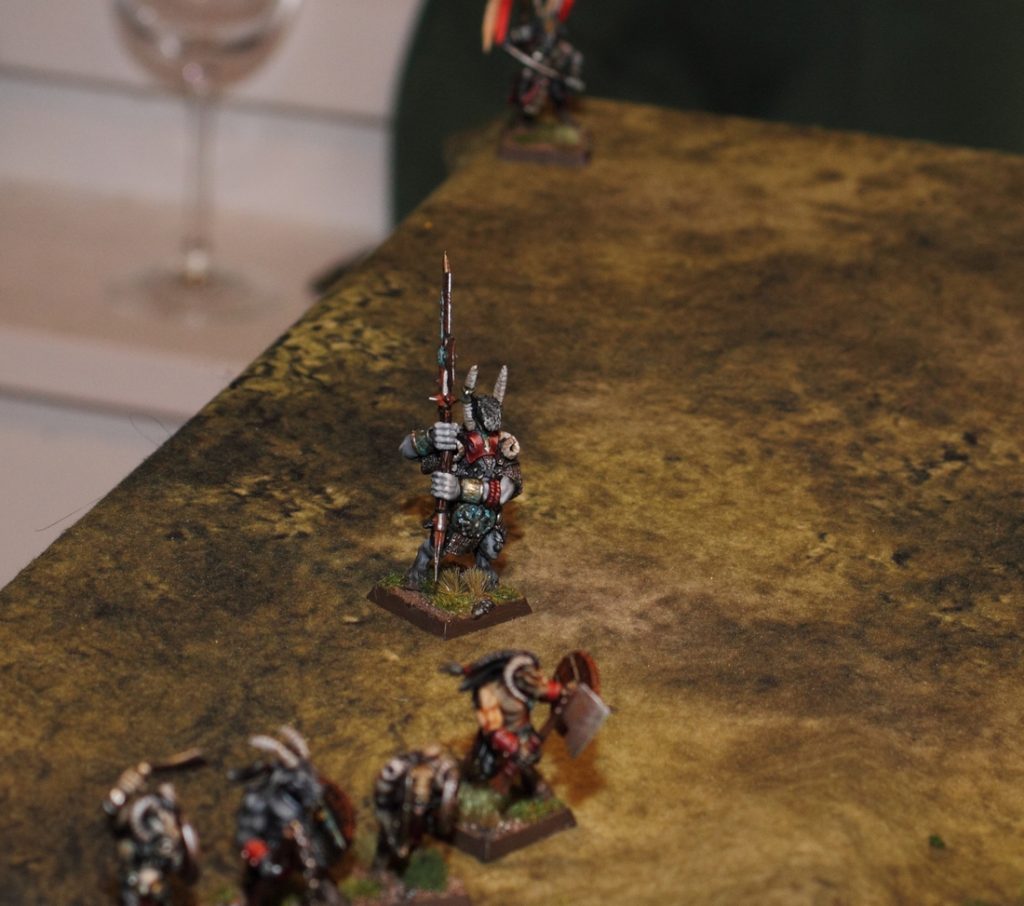 Yup, it’s the minotaur! He used to work for a band of brigands in the mountains, but somehow they didn’t feel like he was worth the investment any more, and with a golden handshake was sent back to his people.

Yorimasu and Tasha bascially run circles around the troll, peppering the monster with arrows and magic darts, but its wounds just keep on closing again. Then it happens – the troll catches Tasha! 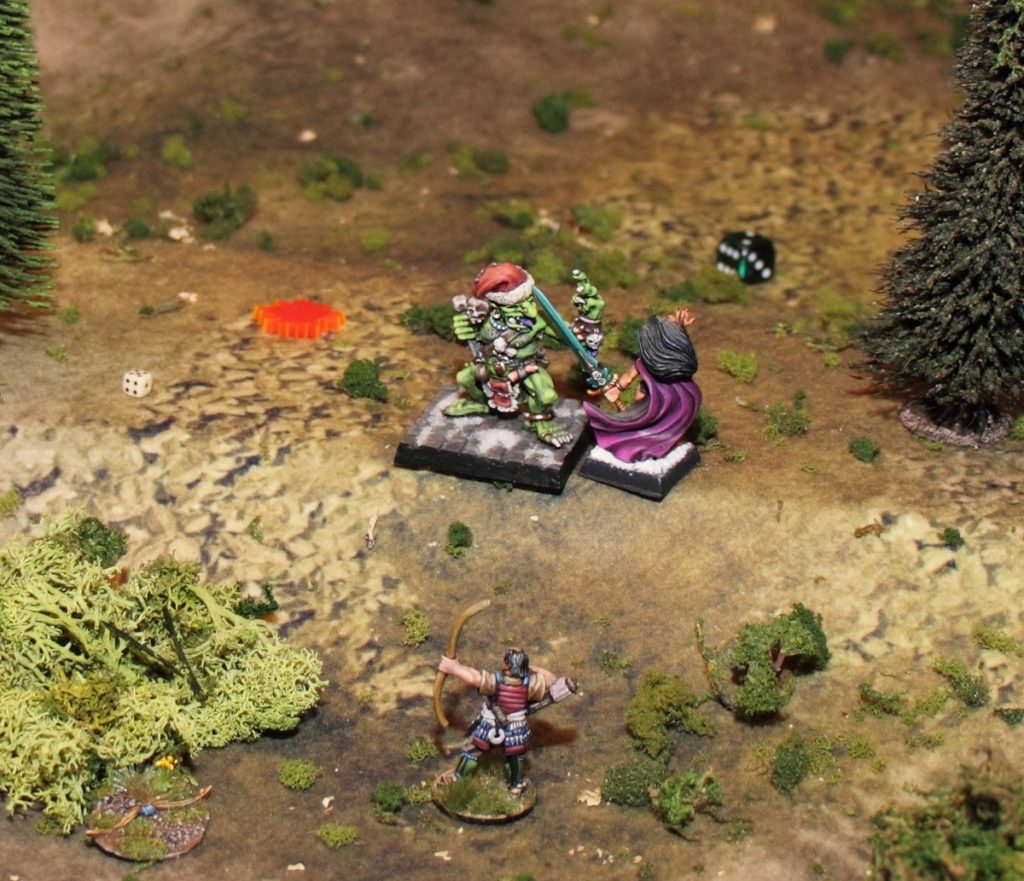 A nasty whack with its giant hand sends Tasha tumbling. She barely stays on her feet and decides to leg it. The creature grabs her by her beautiful cloak and gives her another slap which knocks Tasha out. 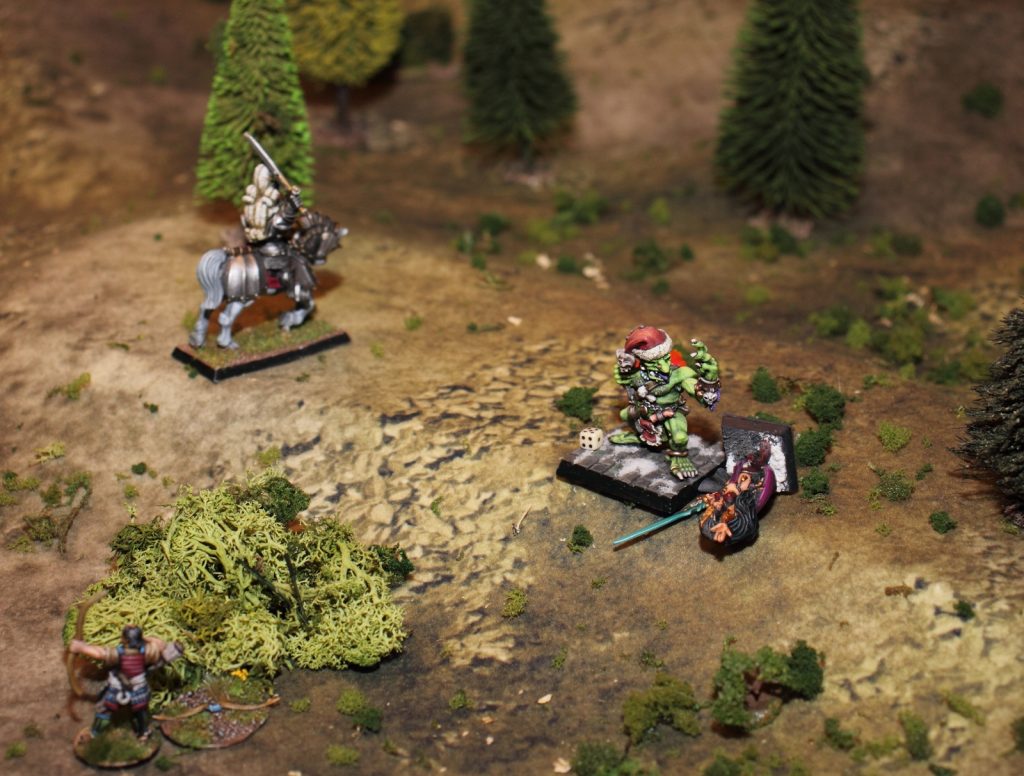 This changes the complexion of the game as rescuing Tasha becomes the top priority. Thrasher holds his ground, despite beastmen jumping out of the woodwork and ambushing him three times.

Yorimasu meanwhile keeps the enemies who follow up from our backs at bay in a retreating battle against the horde. 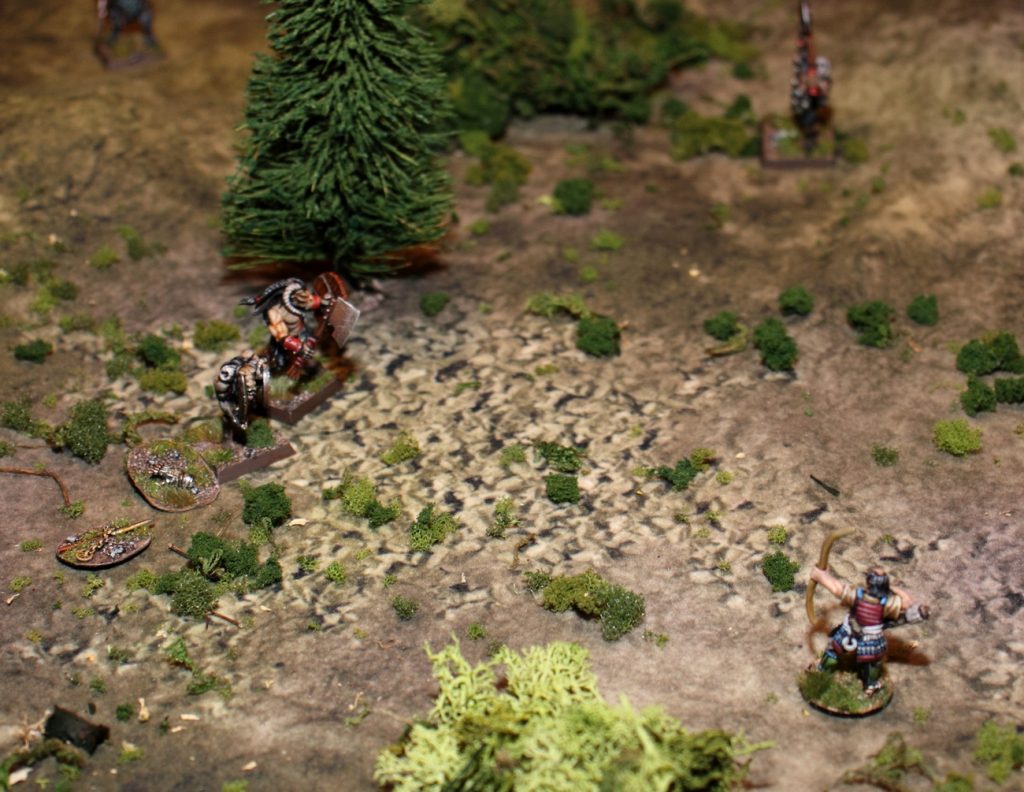 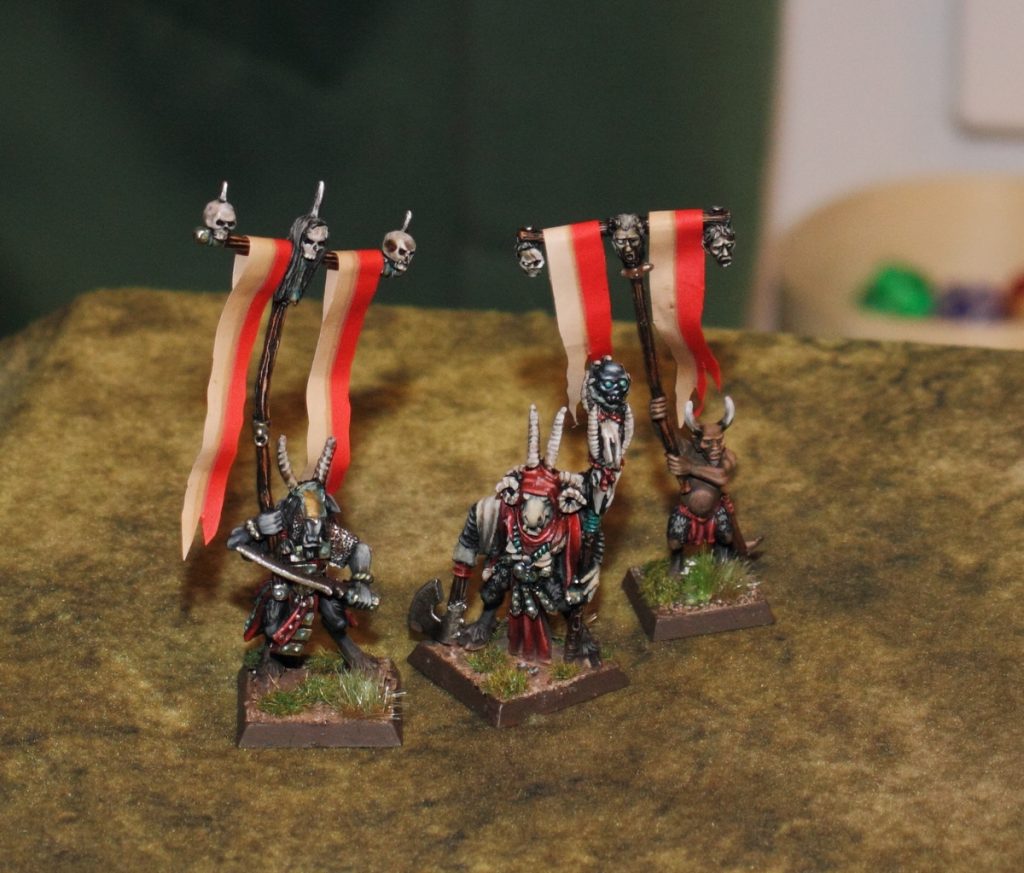 All the while Roland does his best to goad the troll away from Tasha. He bangs his sword’s handle against his shield, he drives his horse on to make noise and trample in circles, all to get the attention of the troll. 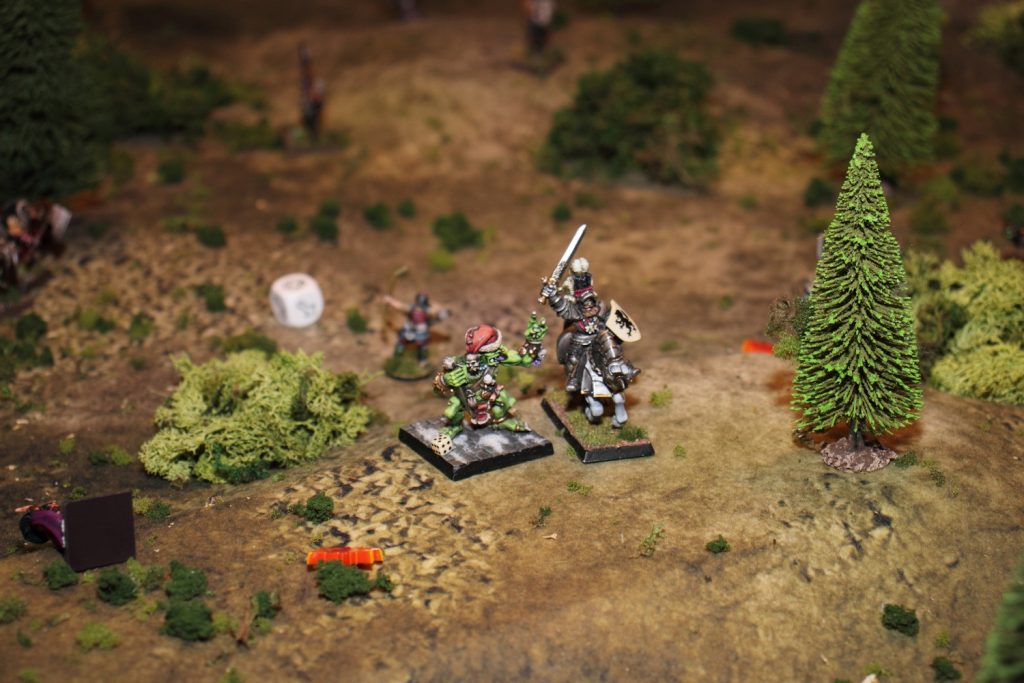 Finally (after a nerve-wrecking number of activations) he manages to catch the dim creature’s attention, who charges at the noble. Roland spurs his horse and, while evading the troll’s grasp, rides over to recover the knocked-out Tasha and hauls her onto his warhorse. 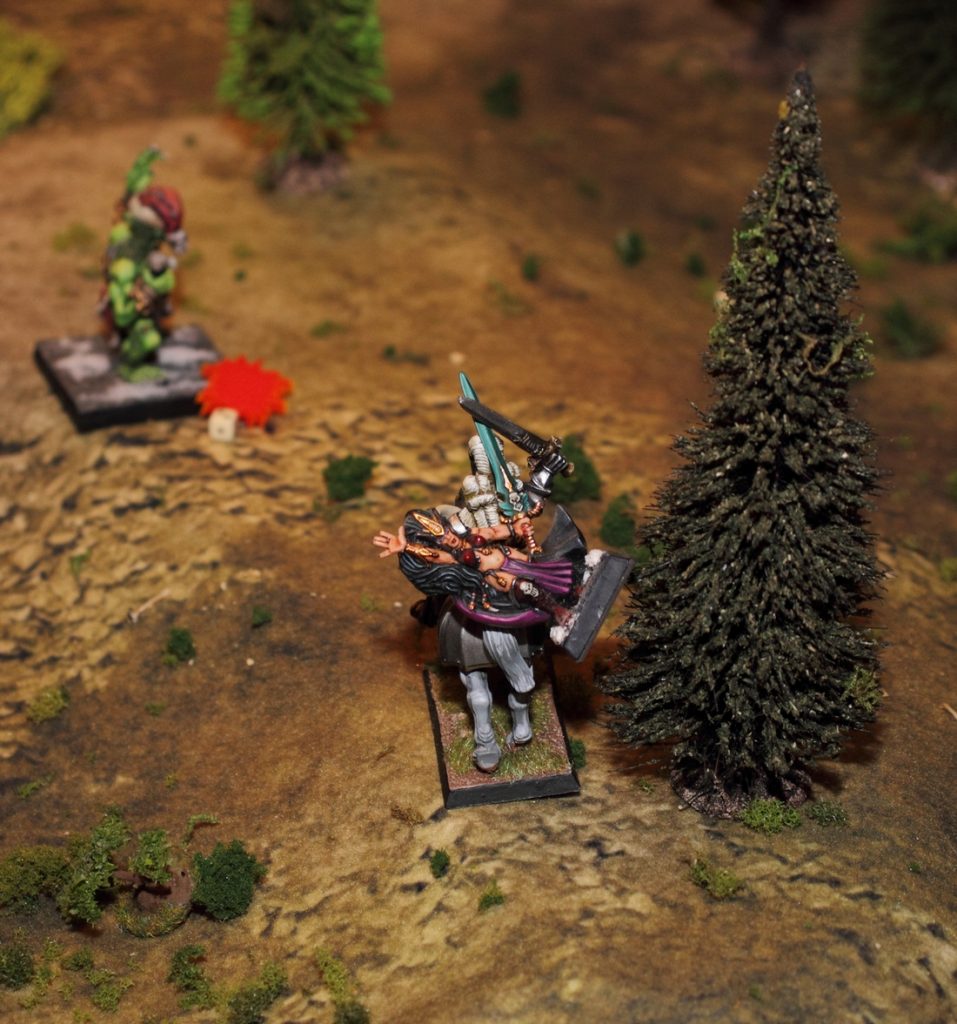 They get away before the trolls realizes what happens. Thrasher already got into safety and waits for them to arrive. 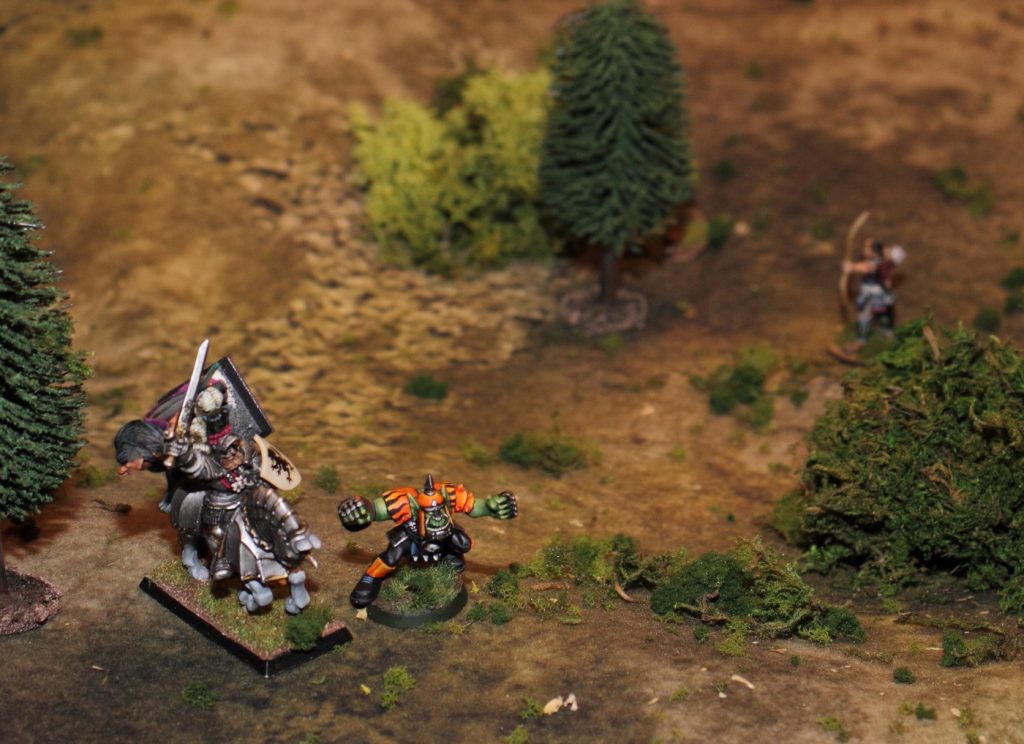 Yorimasu follows up, and our heroes leave the table in halfway good order as the horde can’t do a thing but shake their fists and stomp and snort. 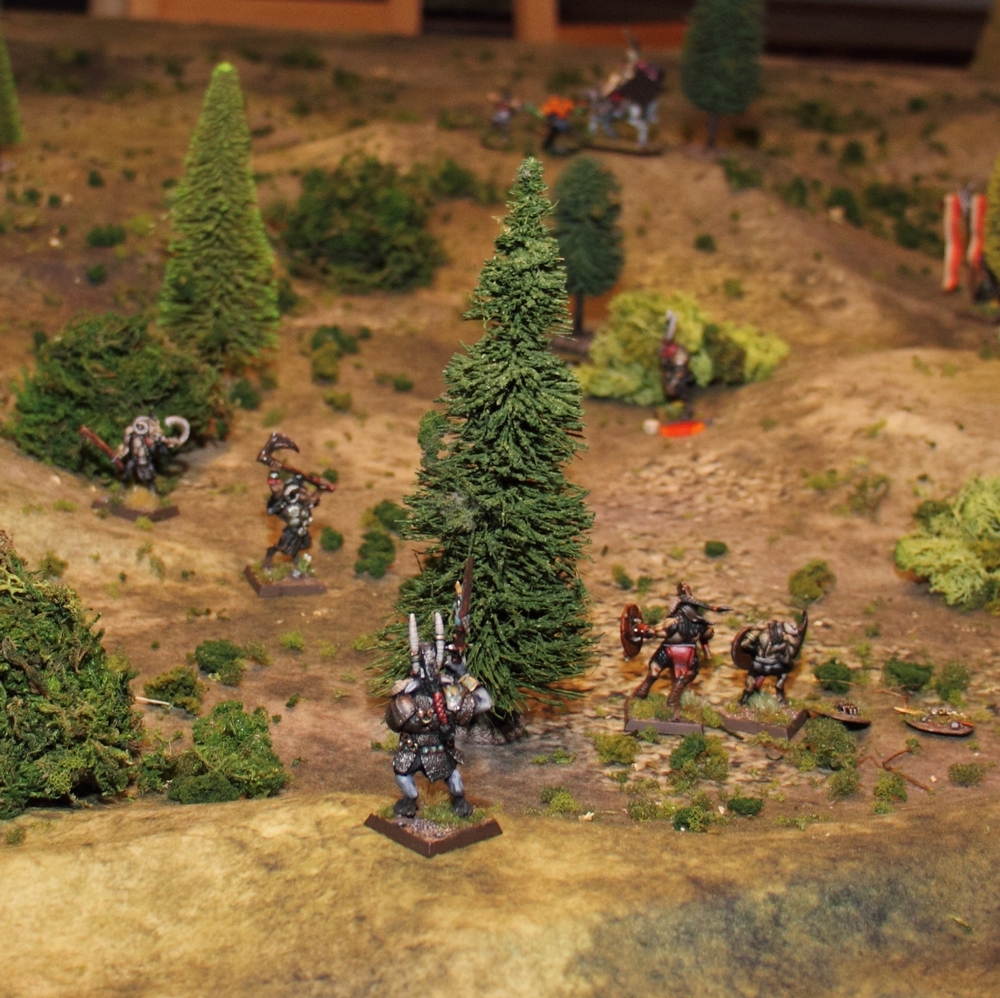 Phew. Overall this went really well. We’re rather happy with our new (slightly stronger) characters, they pack a punch, and at least Roland and Thrasher are pretty tough to beat in close combat. Of course the troll would have chewed them up, and they did good staying away from it.

Trolls are just helluva tough, and the regeneration thing adds to that tremendously. The spell scroll was a very tempting piece of loot, and putting it on a troll is a fun way to tie the heroes down and make the scenario a fair bit harder than it has to be. We also were rather lucky by drawing not a single Trap! card while in the dangerous area (ie the top half) of the table. 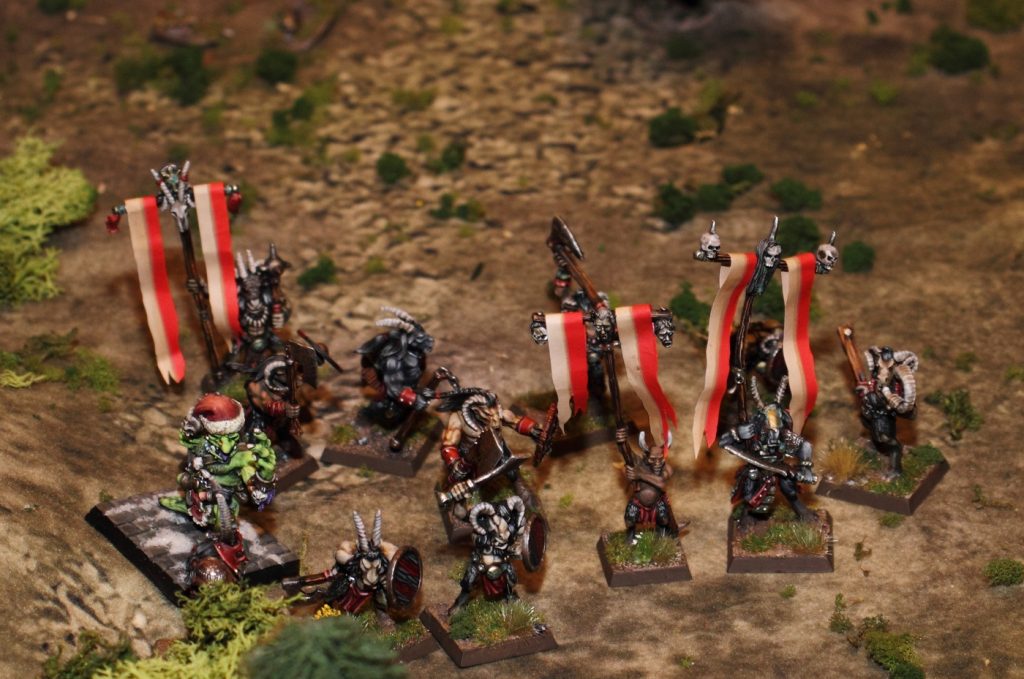 The situation with Tasha downed and us having to get that troll off her was a very interesting one. Basically the troll moves in random directions if there is nobody too close nearby. So we had to roll bad activation rolls and hope for the troll to activate and wander off so we could recover Tasha. For a long time this just made enemy hordes close in or trigger ambushes on Thrasher. Eventually though the troll finally went away; head-on towards Roland! This, combined with him wandering into cover in the beginning and then charging straight at Tasha made us wonder how oblivious this troll was at all. Or if he just was a mastermind, tricking us all along. Don’t mess with trolls.

In the end though things went OK.

A fun game, that, and we even made a nice amount of experience points (extra XP for Roland for recovering the downed Tasha) and loot. 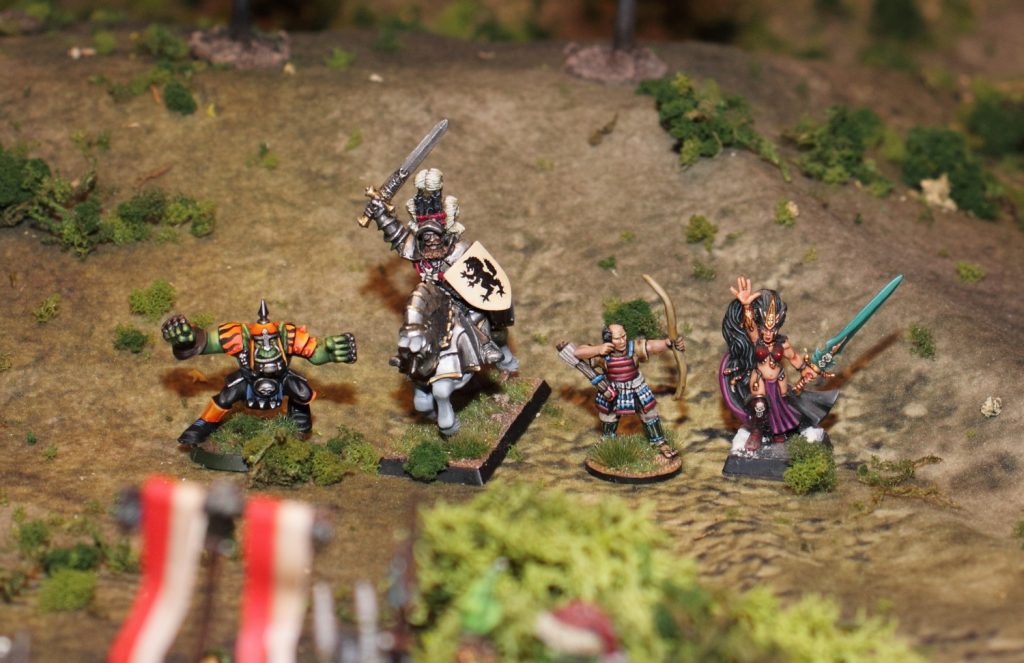 I hope that you enjoyed this little battle report. Stay tuned for further adventures of this party of rogueish advanturers!

One thought on “Sellswords & Spellslingers: A New Beginning”

It's Day 3 of 10 and we've got some very nice Hussars for our League of Augsburg range! https://www.pendrakenforum.co.uk/index.php/topic,21412.0.html

⭐ 20% Off All Printed Helion Wargames and Paper Soldiers Series Titles ⭐

Use code HWPBJAN20 at the checkout.

First Sharp Practice game of the year! Here's the AAR:

A very interesting playtest session and some ideas on asymetric scenarios in Sharp Practice, based on a wildly unknown part of the 1809 campaign. Hope you enjoy the article! #spreadthelard