After the successful mission a week prior we moved straight on to see further adventures of Roland’s Roamers unfold.

What happened so far…

Roland Metternich hired a group of maximum diversity for a minimum of cash to accompany him to Lands Far Away. He is promised a sizeable inheritance from a remote uncle who recently passed and which he intends to pick up in person. 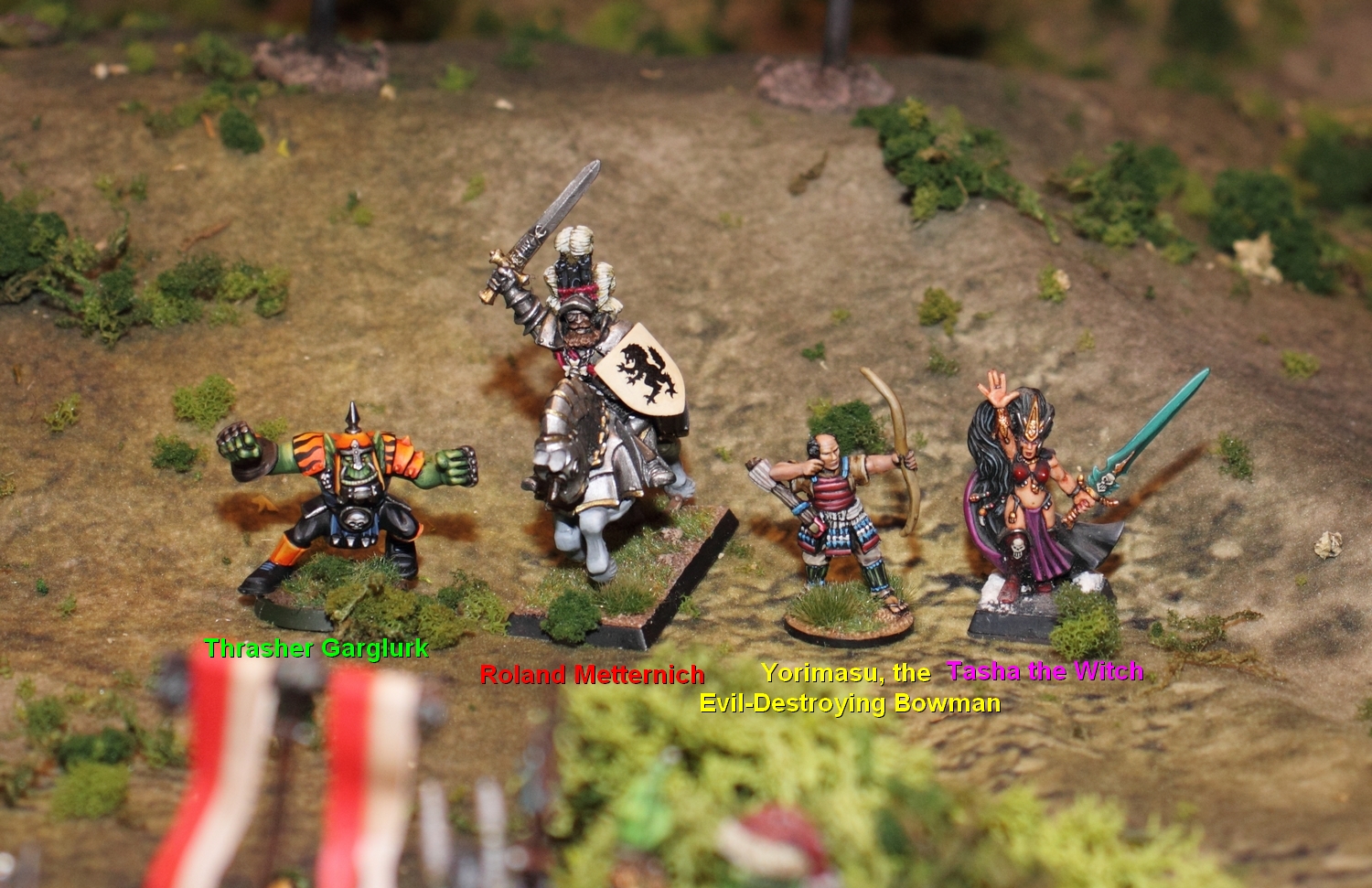 Thrasher Garglurk, former Blitzer with the Orcland Raiders, was keen to leave town asap anyway. Yorimasu, disgraced and thus travelling master bowman, seeks a way to restore his honour. And Tasha the Witch is on a tip top secret mission to find a source of ancient magic powers.

To get rid of authorities and debt-collectors who were after them our adventurers heroically fled into beastmen-infested forests. After having slipped through the grasp of the beastmen horde they finally arrive at the town of Trondberg which promises safety, supplies and a good base of operations for journeying on…

The mayor is still out for a gathering, but his secretary is at authority to hire the heroes for further jobs. After a night of rest/pray/spellscribing/debauchery the heroes are sent out on the important quest of securing crossroads a few miles outside of Trondberg. The mayor and his secretary have to deal with travelling bands of ‘heroes’ on a regular basis and while they’re generally nice to have around the powers that be came to the conclusion that it’s better to keep heroes a.) busy and b.) away from the town until needed. In the long run it’s cheaper to pay them a few silver coins each day than having to deal with bored wizards and warriors causing trouble.

As Roland and his merry people return after an uneventful day of standing guard they find the townsfolk in a panic. ‘The Beastmen are attacking!’ 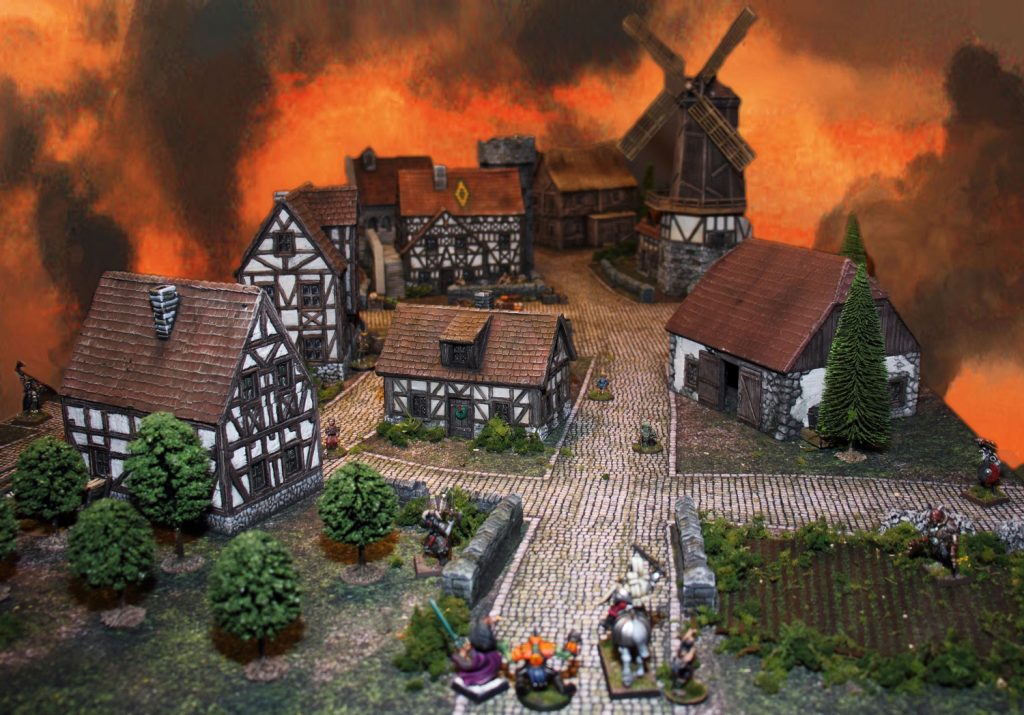 Panicking villagers are running the streets, looking for shelter or trying to save belongings from the slavering horde. Our heroes instantly spring to action. Saving the villagers of course is their top priority.

This scenario (Save the Villagers) was written by the industrious Sunjester, who is one of the pillars of the Sellswords&Spellslingers online community. This, other scenarios, and all kinds of other good things can be found on his blog here: https://grahamsgaming.blogspot.com/2018/05/new-scenarios-for-sellswords-and.html

As usual we’ll use Beastmen Gors instead of Orcs and Bestigors to depict Orc Brutes. Due to our ever-present fear of things getting ‘too easy’ we added another Bestigor and one more roaming Beastman to the suggested setup.

The scenario has 6 villagers strewn across the table. It’s our heroes’ job to pick them up and get them into safety to the fortified shelter at the other end of the table. The heroes can either take the villagers there themselves or send them over on their own, which they’ll do as long as the character stays in their line of sight.

It’s market day, and at the first signs of a beastmen raid some of the more motivated villagers instantly set up a barricade on the town square to defend themselves. 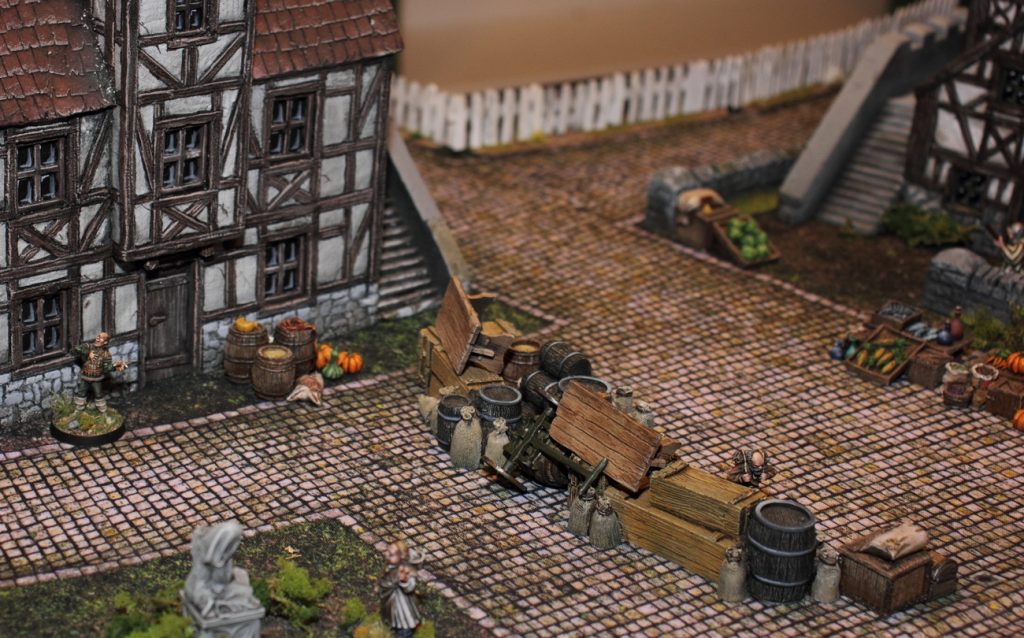 …but the crafty critters found a way to flank these positions and any sort of organized defence fell into chaos.

Roland gives the order to attack the enemy and our heroes get jumped by a beastman immediately. 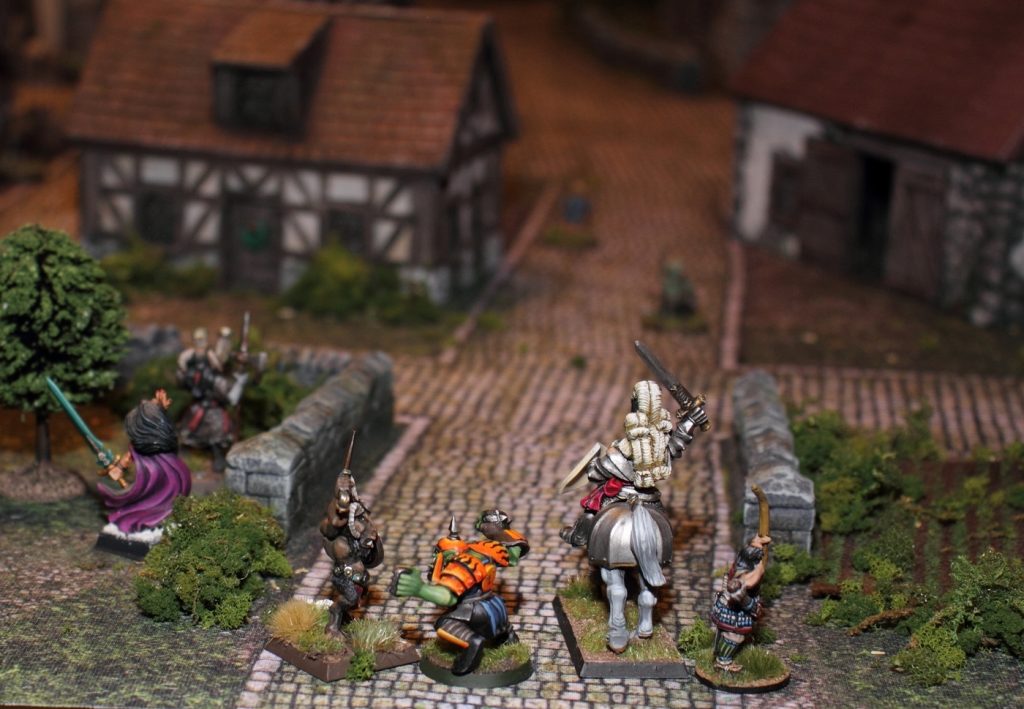 Thrasher knocks him out swiftly. However, there are three big, nasty Bestigors in the direct vicinity, which pose more of a threat.

Tasha is very, very keen on using her newly learned spell (Deathcloud). At this point though she would also harm her allies, so she resorts to throwing magic darts at the nearby Bestigor. The baddie takes some damage, but charges toward Tasha, so Roland drives on his horse and gets between her and the elite beastman. 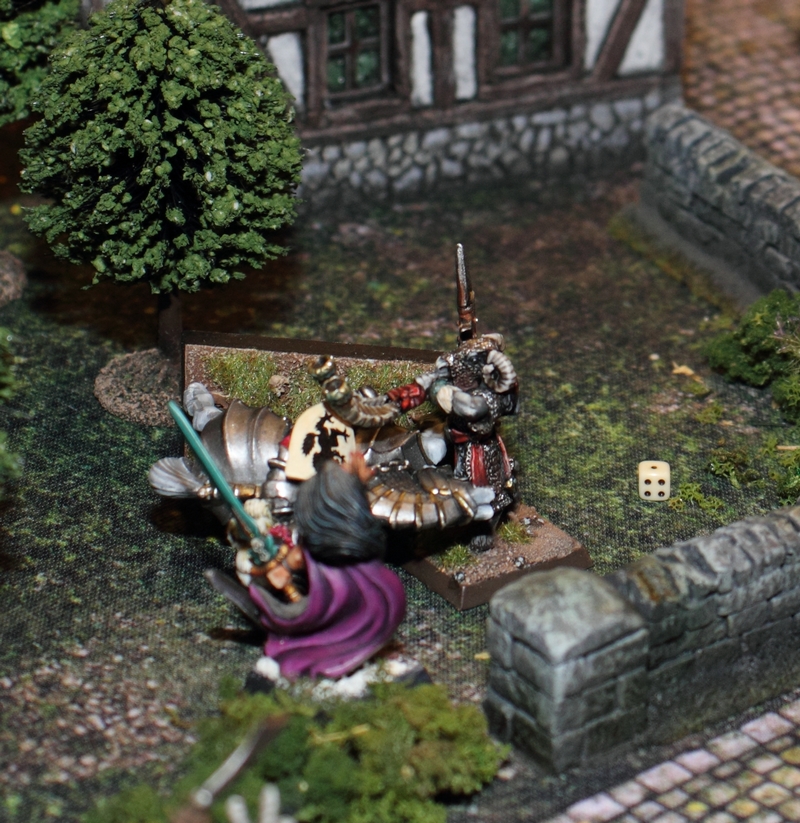 During the ensuing battle Roland is thrown off his warhorse, which takes off to leave Roland lying on the ground, right at the beastman’s hooves. As Roland is writhing in pain and the Bestigor moves in for the kill the noble nobleman kicks the beastly beastman right between its legs. As the Bestigor doubles over Roland finishes the job with his sword.

Thisactually is a specialty that runs in the family. It goes back to Possum von Metternich who won the battle of Gulingen 2415, the grand tournament of Middenheim 2418 and settled the tulip trade dispute between Wurtbad and Biberhof the following year using this very maneuver.

That’s one Bestigor down, one more to go at the right. Yorimasu, the Evil-destroying archer, opens fire at the beast. Tasha moves over to support him. 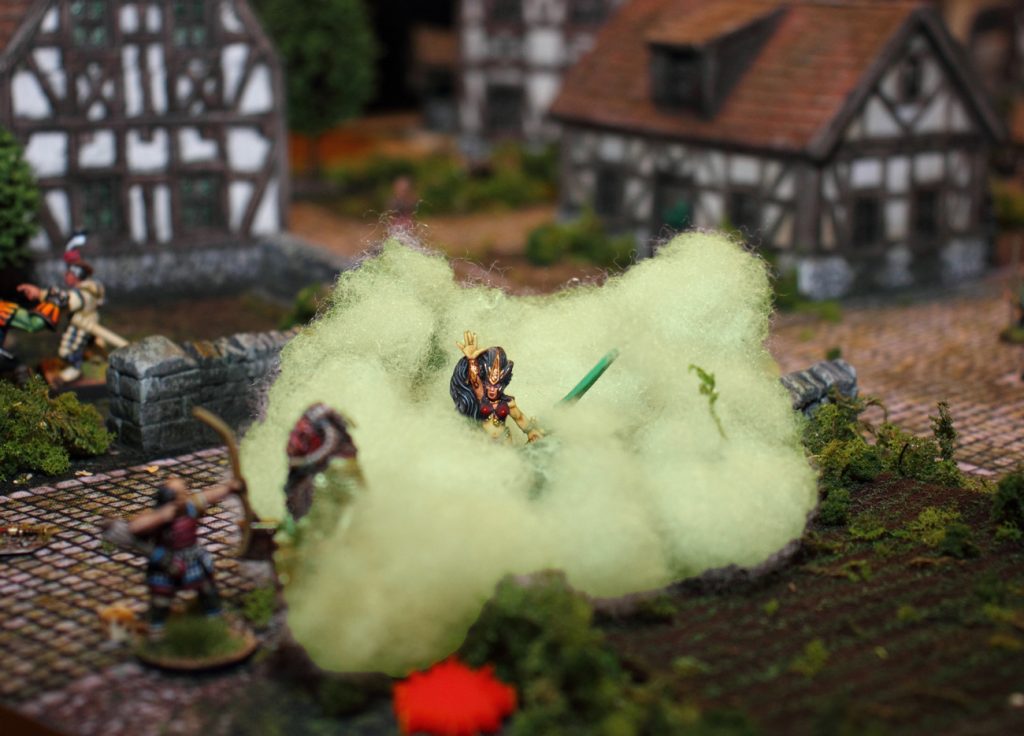 As the Bestigor charges our archer Tasha finally unleashes the acidic Deathcloud of Doom and utterly decimates the enemy brute. Due to a Mana Flux, the winds of magic clearly are in her favor.

On his side of things, Roland is on a roll and takes out another beastman.

Here’s an overview of the going-ons in these early stages of the game: 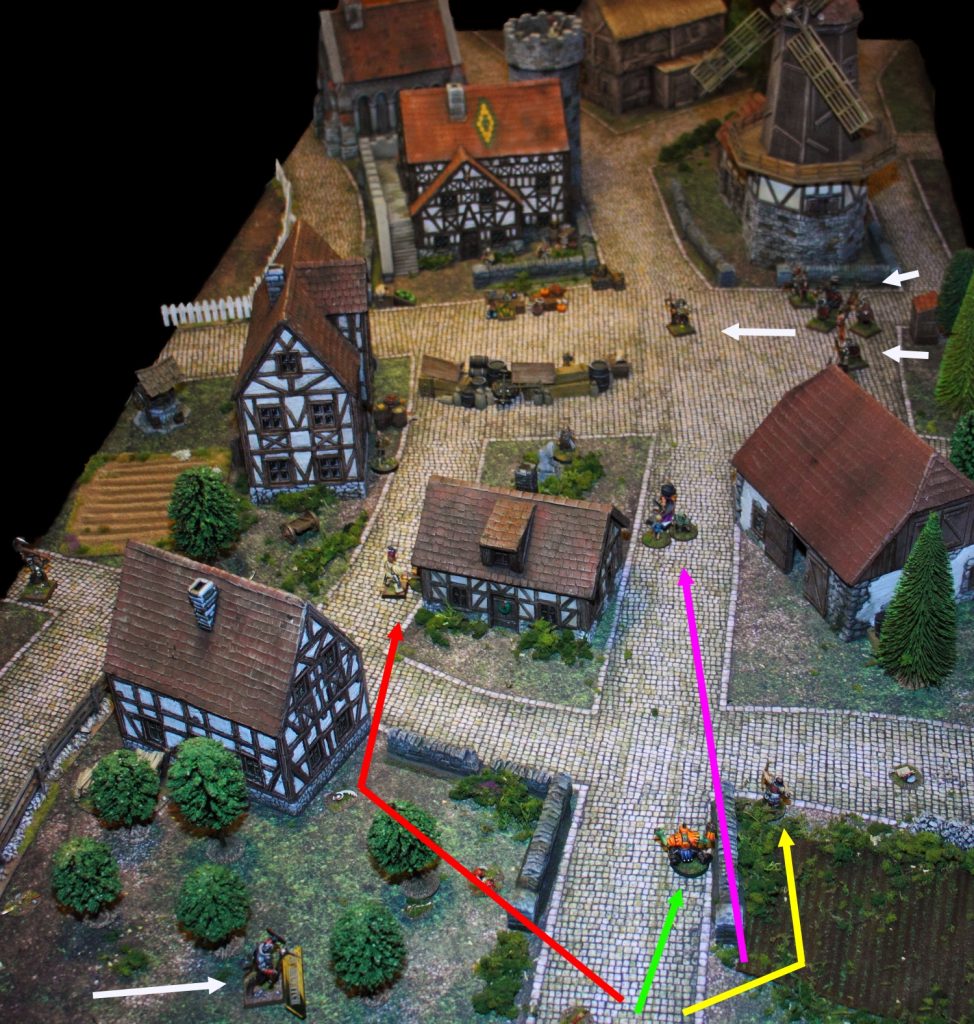 Roland and Tasha storm ahead, both picking up villagers as they go. Thrasher and Yorimasu lag behind a bit, as beastmen move onto the town square.

Thrasher moves up and starts arguing with a priest who insists in praying for the town to be saved. Yorimasu catches up with Tasha and her entourage. Roland leads the way toward the fortified manor house. 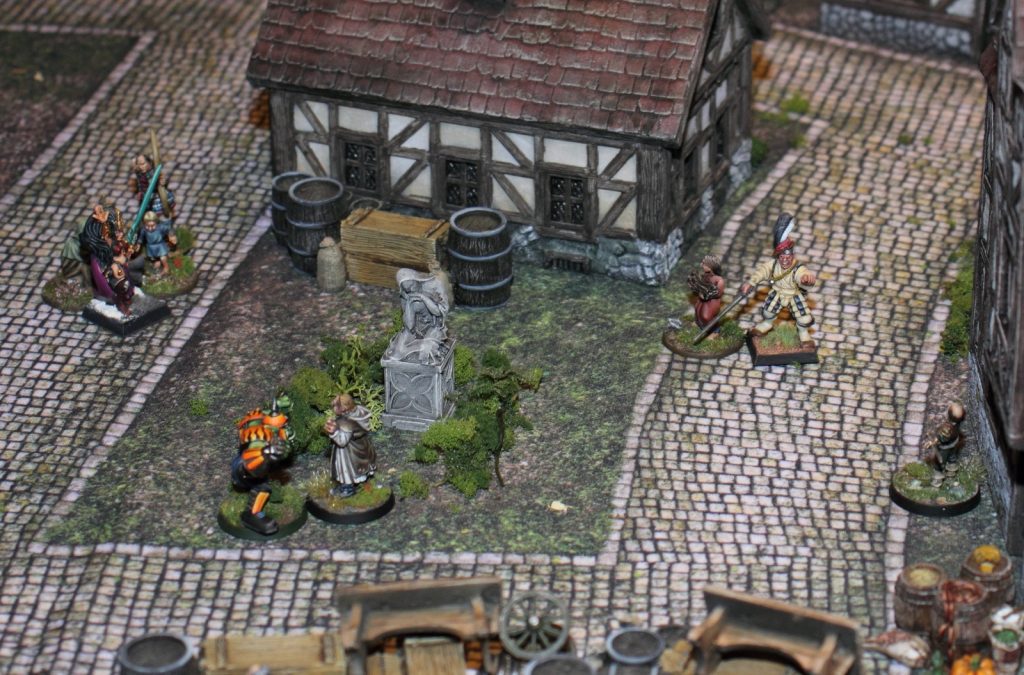 Things kinda start getting iffy. More and more beastmen pour onto the town square. One Bestigor even gets dangerously close to a villager who tries to hide behind the barricade. The barricade actually becomes a bit of a problem for our heroes as they have to decide whether they want to go left or right around it. The right is swarming with enemies, so Roland runs around the left, taking a girl and a merchant with him. 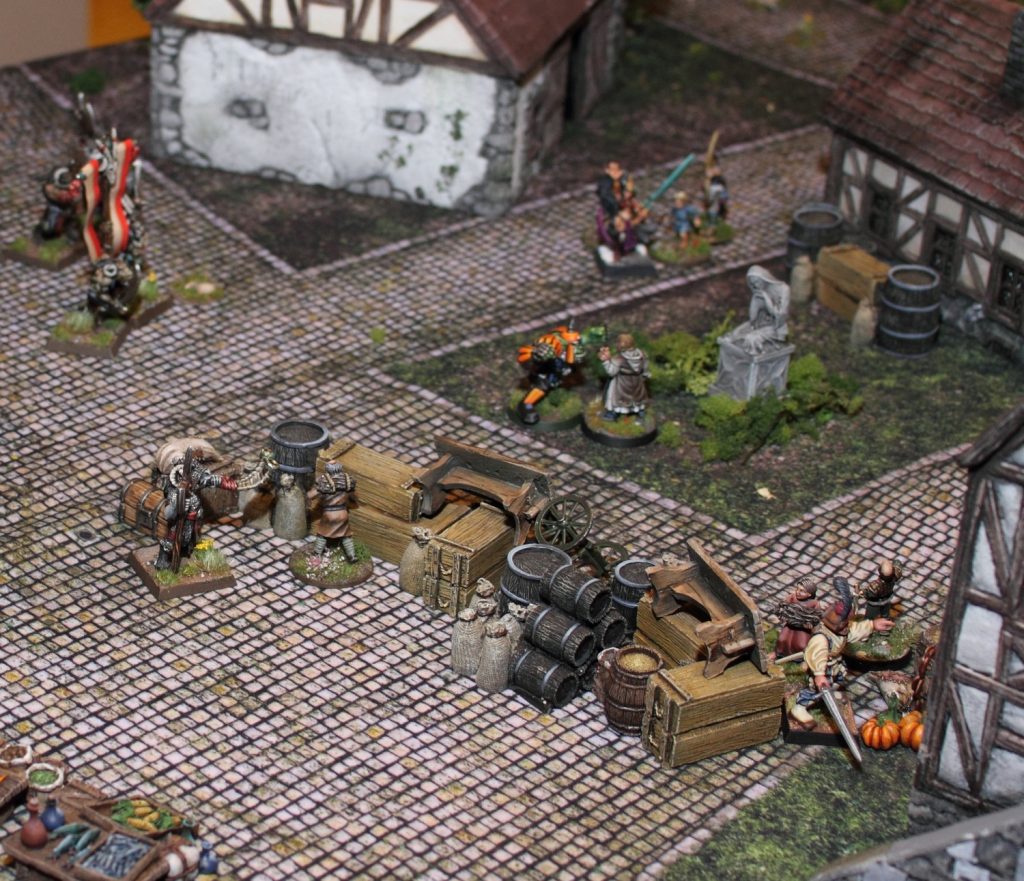 Tasha charges ahead to unleash another death cloud while Yorimasu stays back with the villagers. 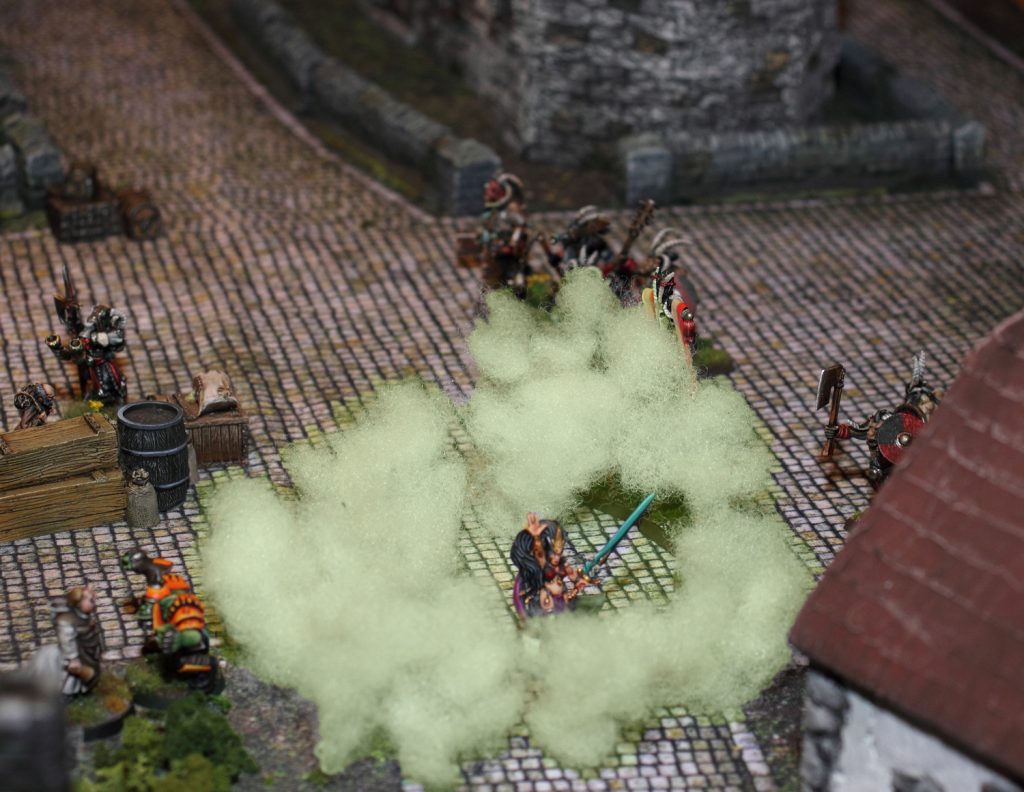 The deathcloud takes out three beastmen right away. Yorimasu kills another three with well-aimed shots.

Still another horde of beastmen with another Bestigor in tow come charging across the town square. 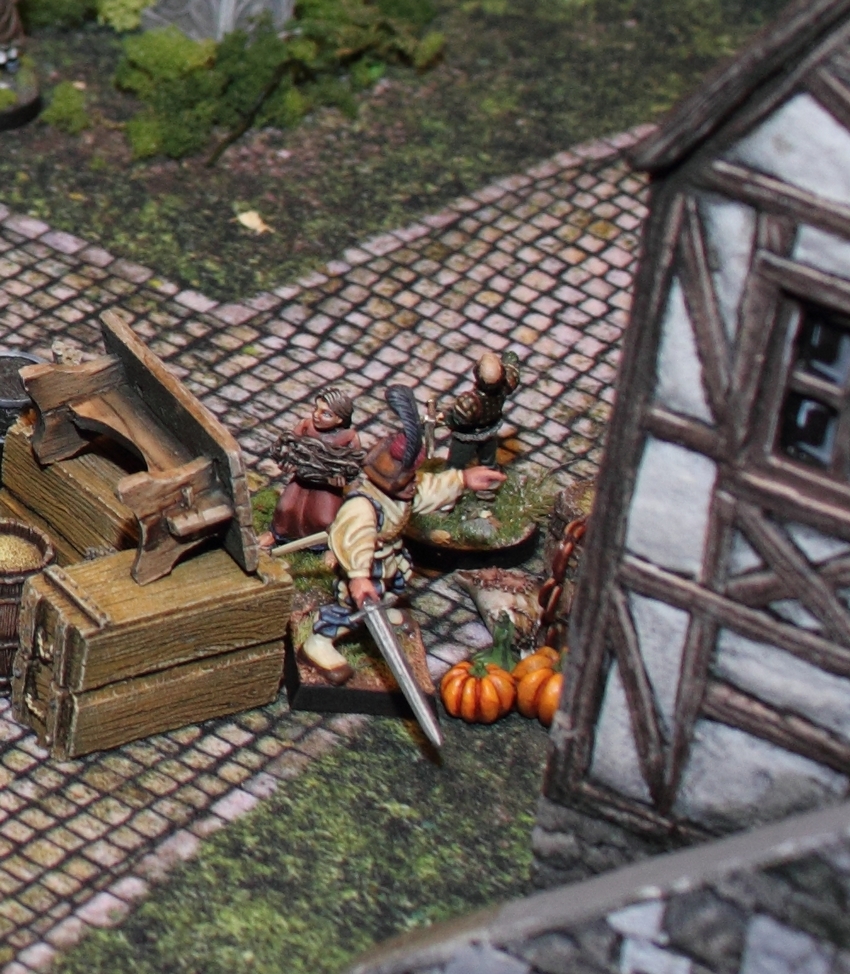 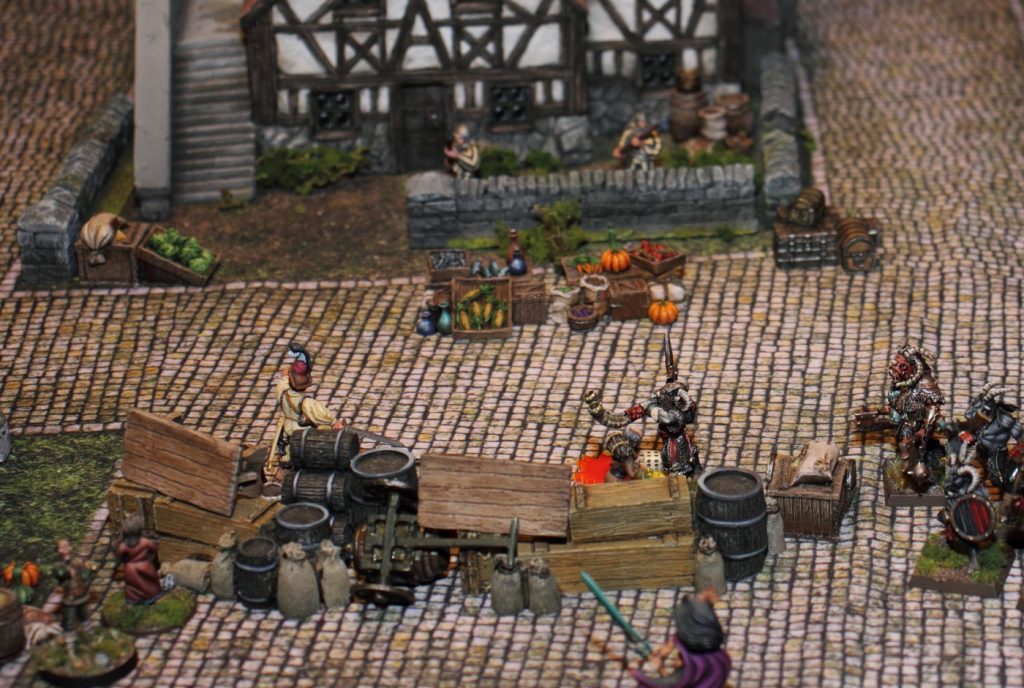 …and strikes him down. 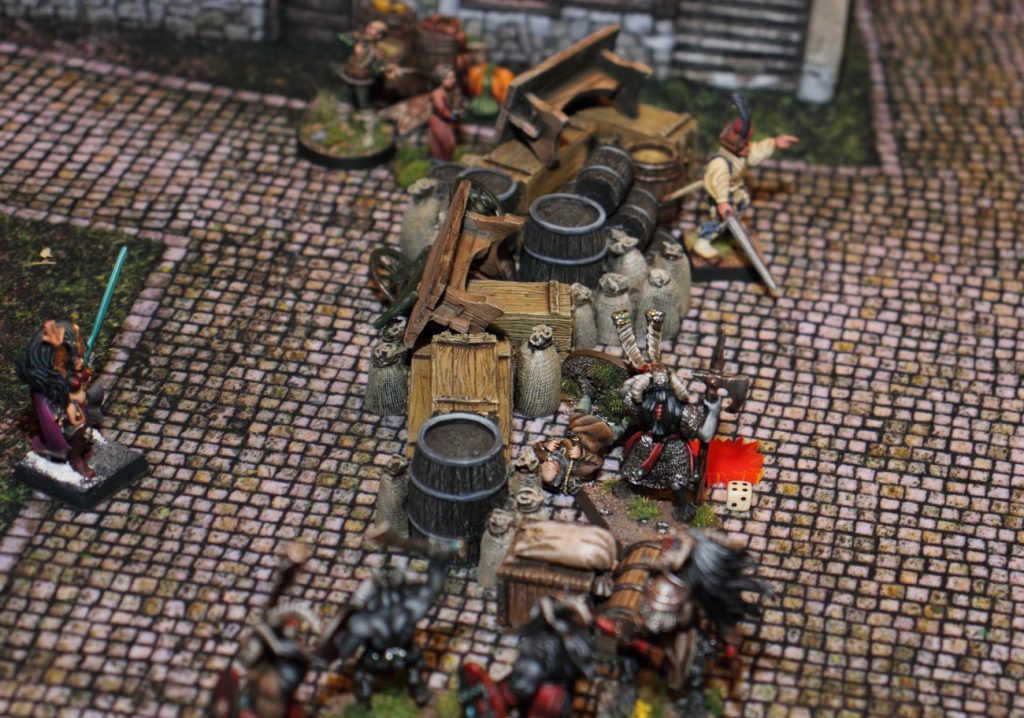 The problem now is pretty evident (apart from the fact that the beastmen just killed a villager) – the town square is full of beastmen and with the biggest and baddest of them all sitting right behind the barricades even going around the left is impossible without getting caught in a fight. So Roland engages the big Bestigor on his own to keep the corridor of retreat open. 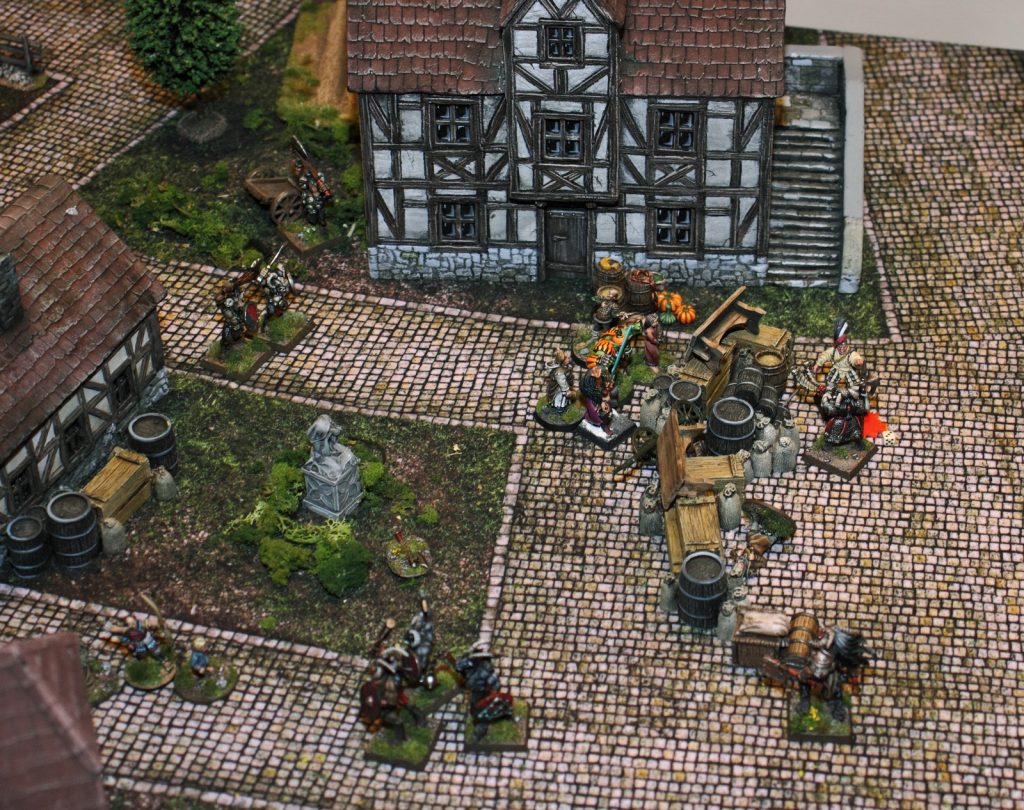 In the right we got the big bestigor and Roland duelling. In the top centre Thrasher finally convinced the priest to follow him to the barricade. Tasha was ready to unleash all sorts of deadly magicks towards the beastmen, but that mighty Deathcloud earlier seems to have drained her magic powers for the time being. She resorts to leading townsfolk to the fortified manor house. Yorimasu’s situation is gettig problematic. Him and the two villagers with him are in serious danger of getting cut off by two approaching beastmen hordes. 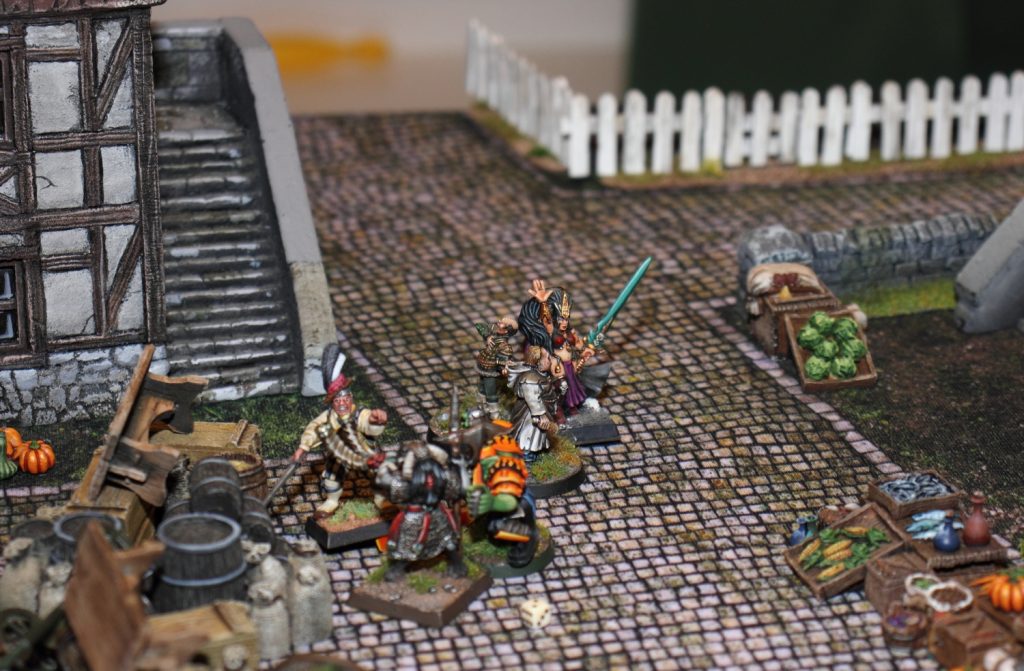 All of a sudden, things look kind of alright. The only problem is getting Yorimasu and his two civilian friends into safety.

…as Thrasher, ever the impulsive guy, decides to resolve the situation by beating up the next biggest guy. Devoid of any sense of honour the beastmen pile on  and Roland comes to Thrasher’s help. 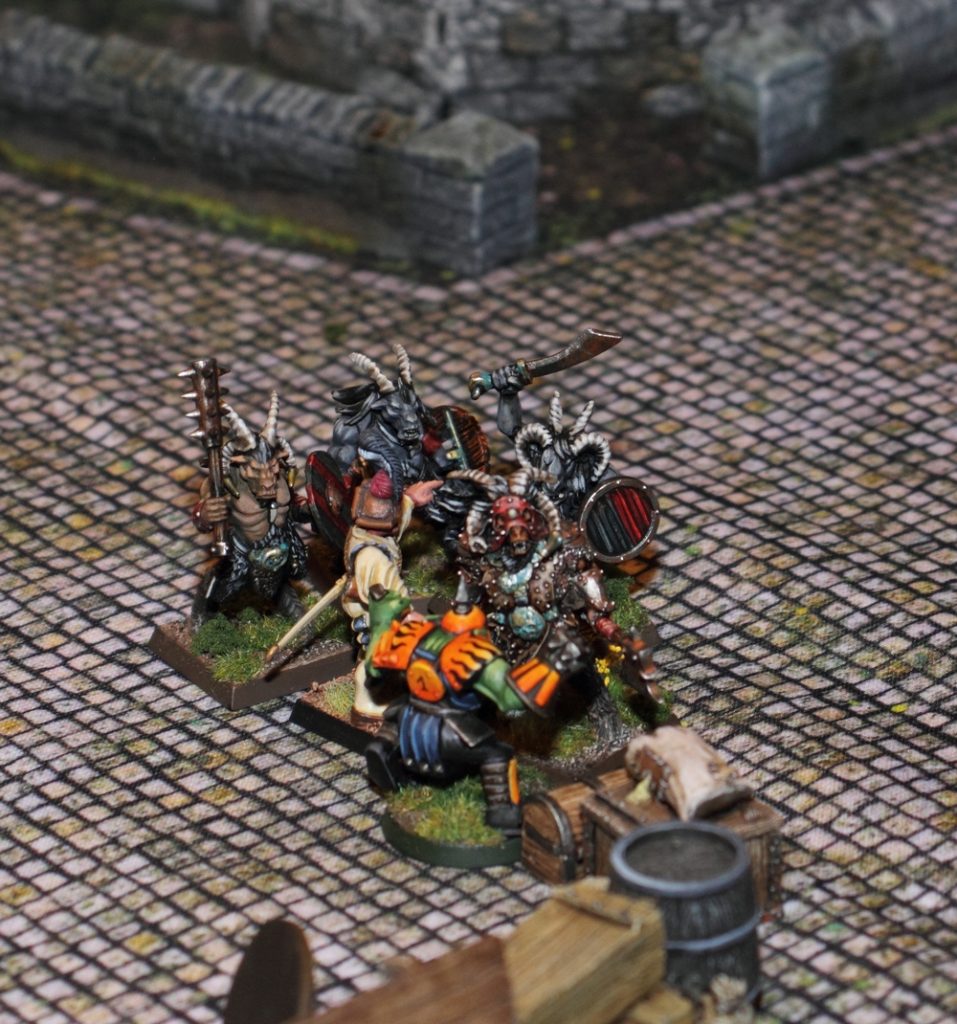 Thrasher gets beaten up a fair bit (even worse – as he’s trying to block the Bestigor’s blow with his arms something pops), and things don’t look good there. The Orc sees his error and tries to get away, but the Bestigor catches up and Thrasher is killed outright. 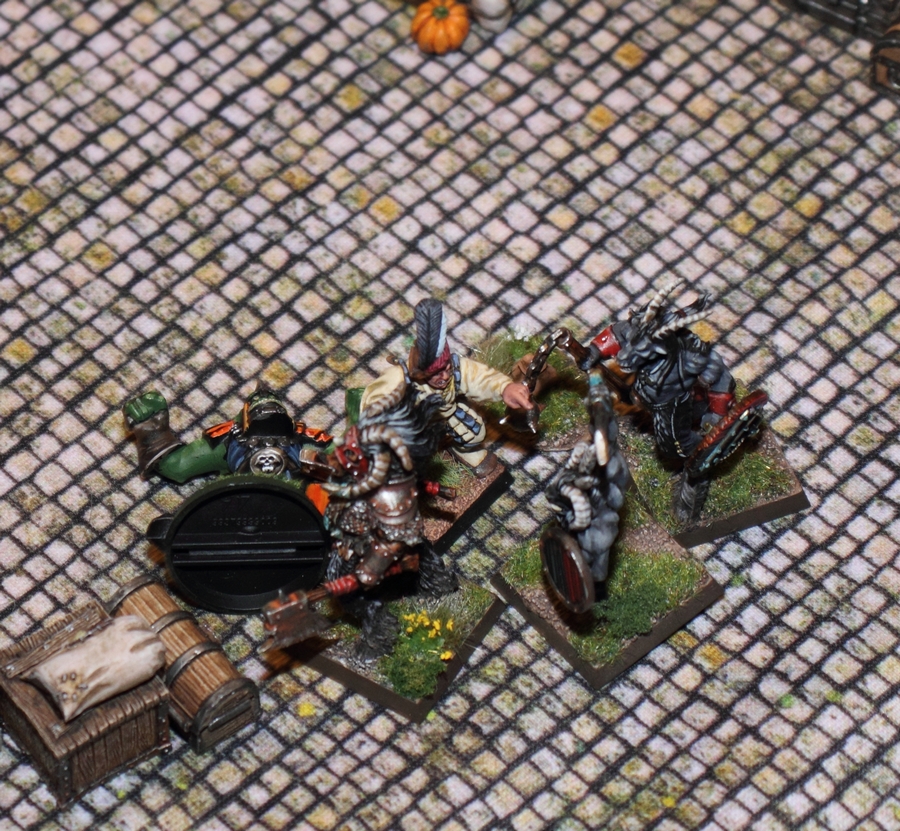 Thanks to his shield prowess at least Roland manages to disengage and flees into the fortified manor, along with Tasha. 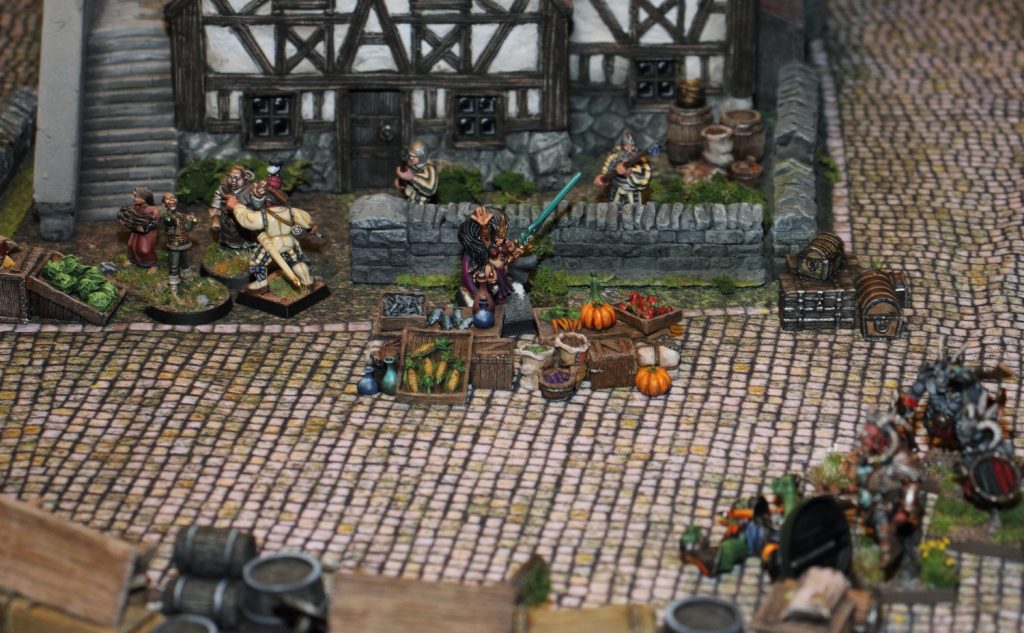 They can barely do anything but watch as Yorimasu does his best to follow up before he gets cut off completely. 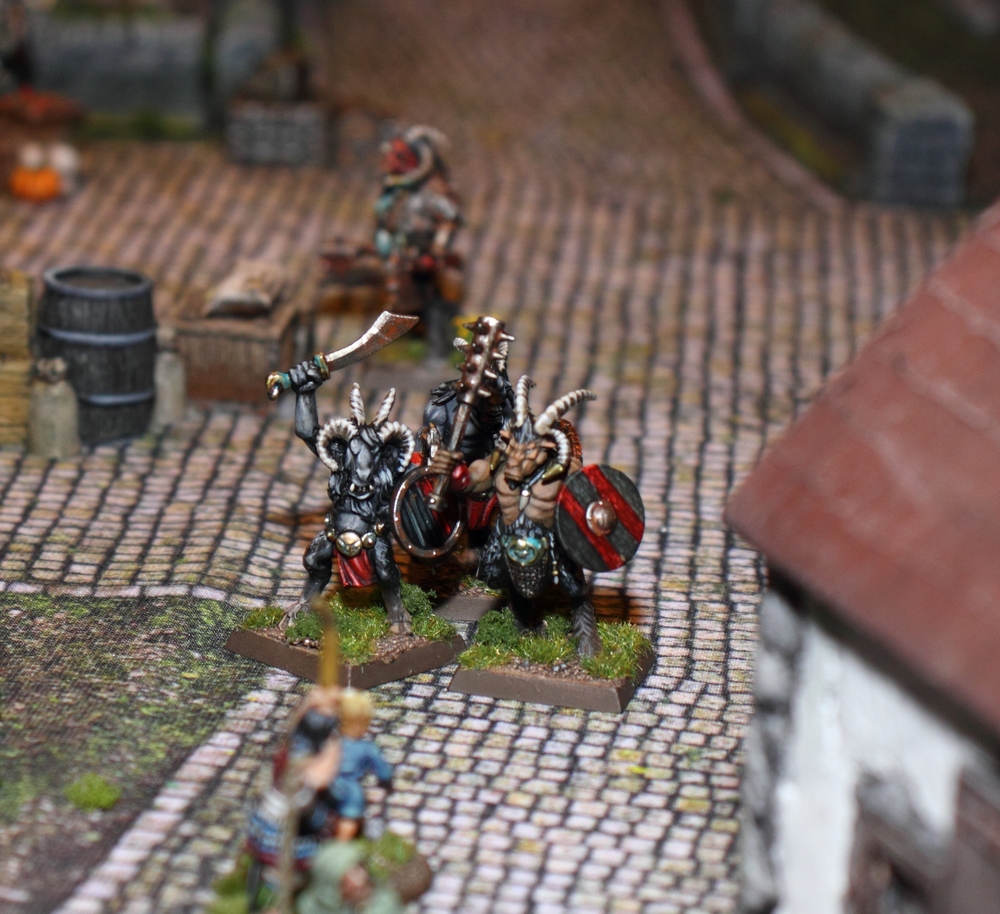 In a last ditch effort he shoots down one beastman and runs for it to break through to the barricades. 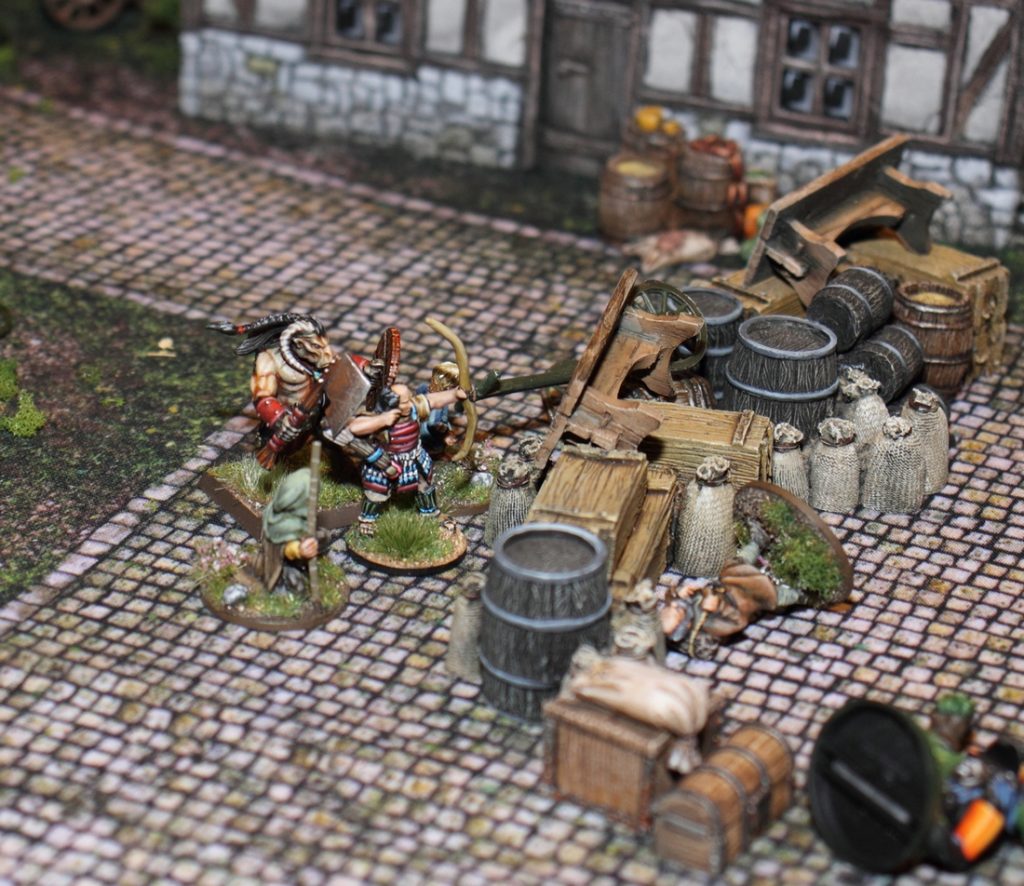 A single beastman from the horde to his right catches up though and down goes Yorimasu. 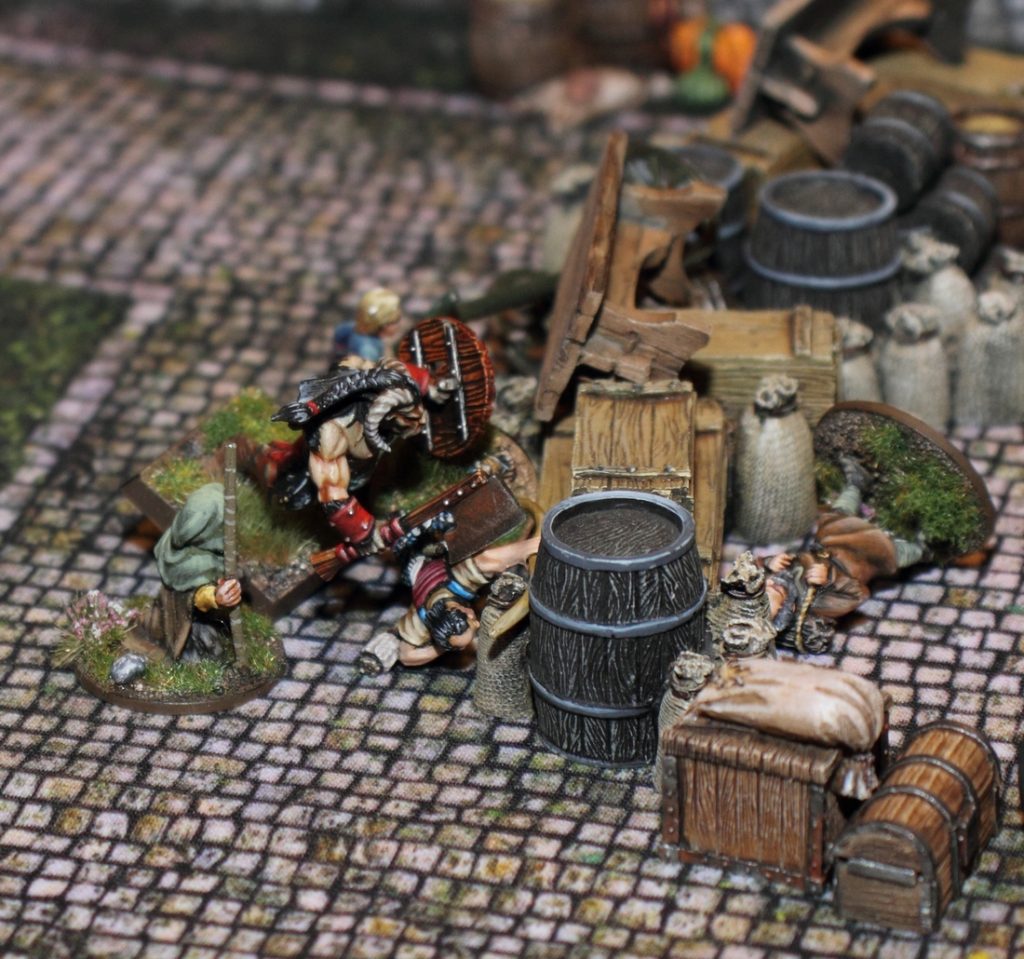 Here’s an overview of the situation at the end of the game: 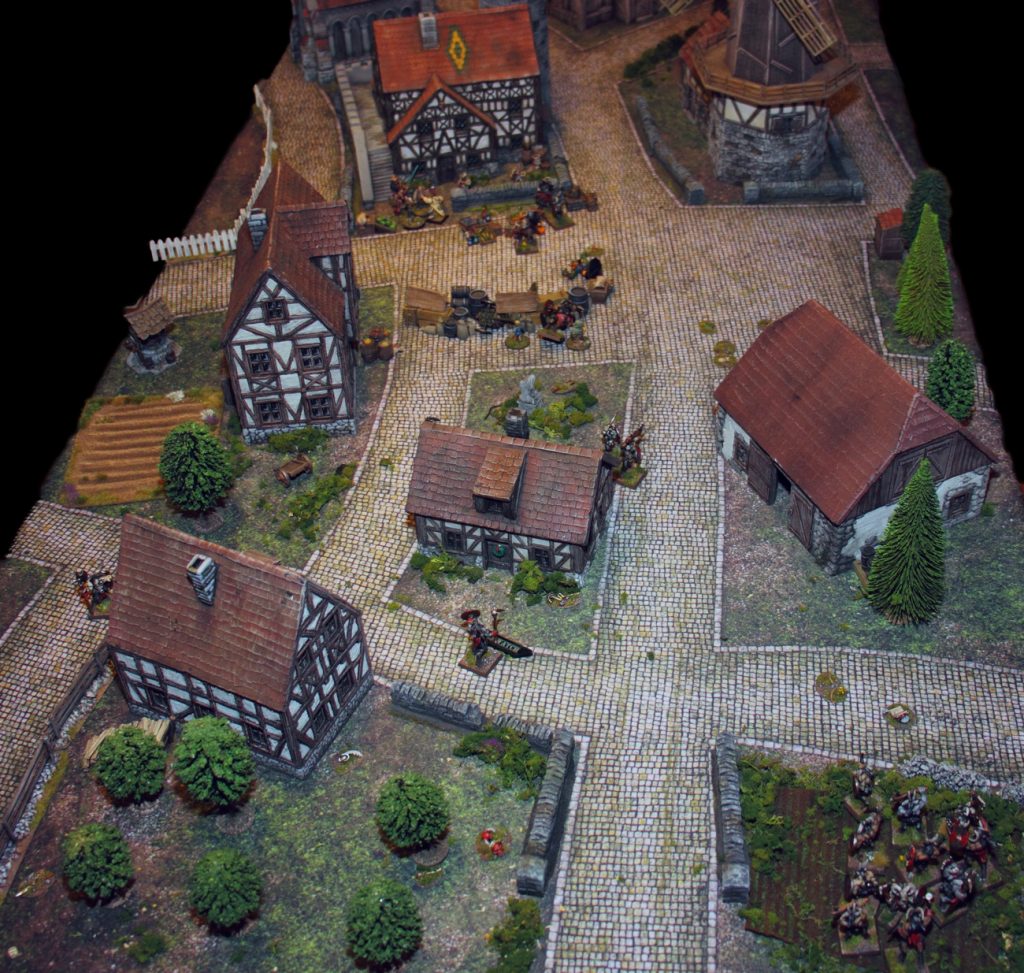 The beastmen overrun the town square, having slain one villager and Thrasher. They take Yorimasu (who might still be alive) and two villagers prisoner and start looting the place. On the upside, Tasha and Roland von Metternich made it to the fortified manor with three townspeople. 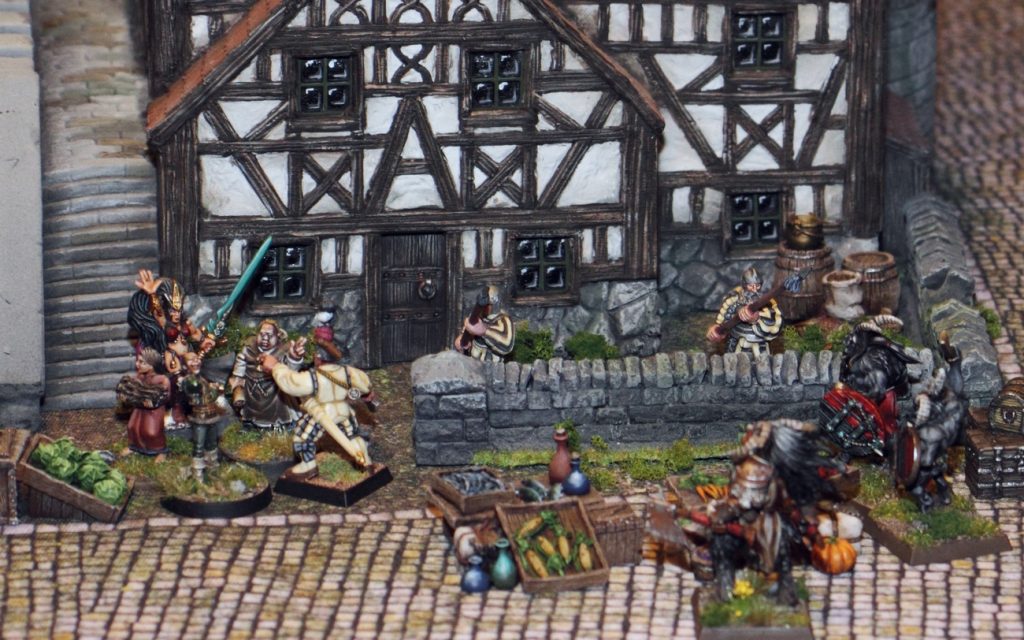 …as more and more beastmen join the pillaging horde.

Grr. Charging Thrasher right on into the next Bestigor was NOT a good idea. Just as things look marginally okay I get a bit overexcited. And these B+estigors are just really hard.

Then there’s the thing with Yorimasu getting cut off. Sure, it’s easier to happen to archers, but this was unfortunate. It was during the phase of the game at which we’re getting really cautious and we just roll one activation die each, which I always find a bit frustrating. Just means we don’t get off the spot. At points at which we should. Statistically it’s probably the right thing, but tell that to the lizard portions of mah brain! 😀

Hope you enjoyed this battle report, and stay tuned for next time!

2 thoughts on “Sellswords & Spellslingers: Save the Villagers”