We got the rules introduction out of the way, let’s have a game of 5150:Citizen Soldier!

As outlined in my review of the rules, the campaign game is an integral part of 5150: Citizen Soldier. So even for my test game I wanted to get right into it.

My faction of choice is a human Planetary Defence Force, basically just one step above some local militia. Based on this choice I rolled up the situation: My poor PDF’s territory is being attacked by neighboring Zhuh-Zhuh. In terms of my own game this of course would be a backwater imperial world under attack by Space Ork forces. Other than renaming things I didn’t change a thing about the stats or rules though.

Starting campaign morale for the Orks: 4

So the roster for the first mission looks as such: 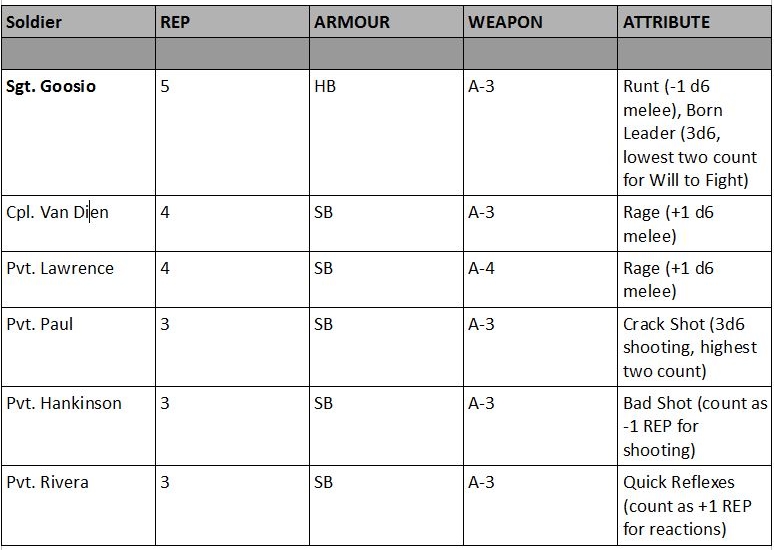 Sgt. Jaidev Goosio (my player character) has an amazing REP of 5, as suggested by the rules. He’s the hero of our story, so he shouldn’t get blown up right away. Other than his comrades who only get Soft Body Armour (SB) he wears Heavy Body Armour (HB). Sgt.Goosio gets two attributes, one is rolled for (Runt), the other one (Born Leader) I can freely choose from the list.

His second-in-command is Corporal van Dien, sporting a solid REP of 4, just like Private Lawrence. Both are extra aggressive in close combat. The rest of the squad, Paul, Hankinson and Rivera, all have REP 3. Paul is a very capable shot, which surely will prove very useful. Hankinson on the other hand is an outstandingly bad shot, so he gets to carry the radio set. Rivera is a bit hyperactive and extra responsive to his surroundings.

The typical squad of Orks will also have six members, all armed with a mix of automatic weapons (counting as automatic rifles), their squad leaders have REP 4, all of them wear Soft Body Armour and have the Rage attribute.

The first mission of any campaign is Patrol. Sgt.Goosio’s squad is ordered to patrol no man’s land and carry out some recon work. They are to cross the board and spend one full activation at the opposing table edge in two of the three sectors at that edge (more on these in a bit) and then leave the table via their own table edge. 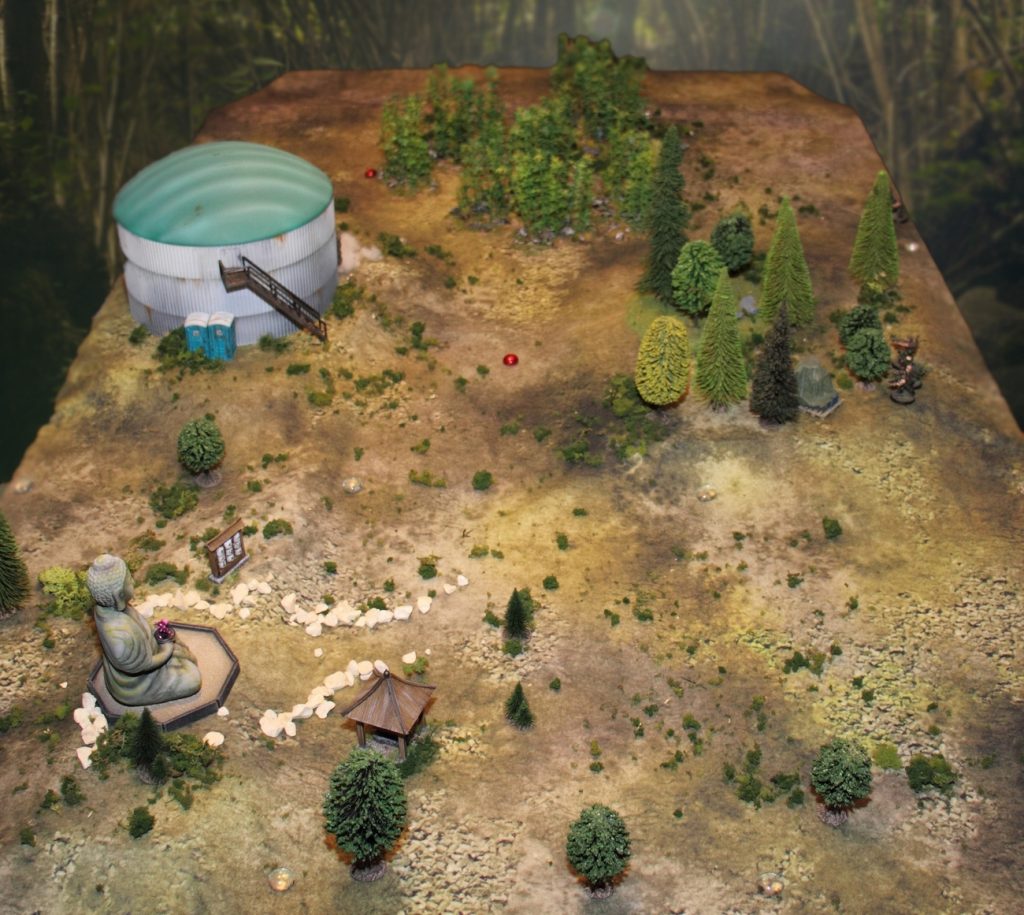 The 5150 Citizen Soldier rules suggest a 3′ by 3′ table, I went with 3′ by 5′, just because I’ll always take a bigger table over a smaller one. I stuck to the rules closely – this is a test game after all. So I used the pretty neat terrain set-up rules. Size and layout of the table notwithstanding, the player cuts the table into 9 segments:

The segments are numbered 1 to 9, from top left to bottom right. First you roll for terrain in a number of segments. Then the player deploys their  figures at the table edge along segments 7, 8 & 9. And THEN you roll which segments PEFs (Possible Enemy Forces) are placed in. If possible in cover, if no cover is available in that segment they’ll deploy at the centre of the segment (as seen with the PEF in the centre segment no.5).

This very quickly led to a good description of the situation: A few years ago a small tribe of Blood Axe Orks showed up some kilometers off our village. They’re dangerous, but mostly keep to themselves; even some basic trade emerged between human outposts and the Orks. They seemed to lack engineers, so they were more than willing to take some technology (moisture pumps, generators, basic radios, etc.) in exchange for keeping the population of Terror Toads and other predators in check. 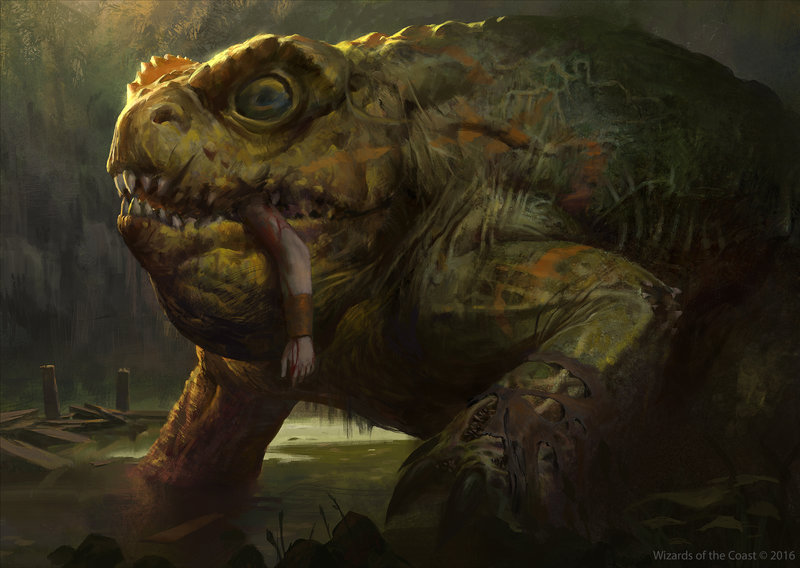 In recent weeks the Orks seem to have gotten more hostile. There are reports of skirmishes between human and Ork patrols and suspicion of sabotage against imperial infrastructure. Following these incidents local PDF units are activated to patrol no man’s land between human outposts and the Ork settlement.

Sgt.Goosio’s squad is ordered to patrol around the preciosium gas silos 46 to 51 at the border between human- and ork-claimed territory. 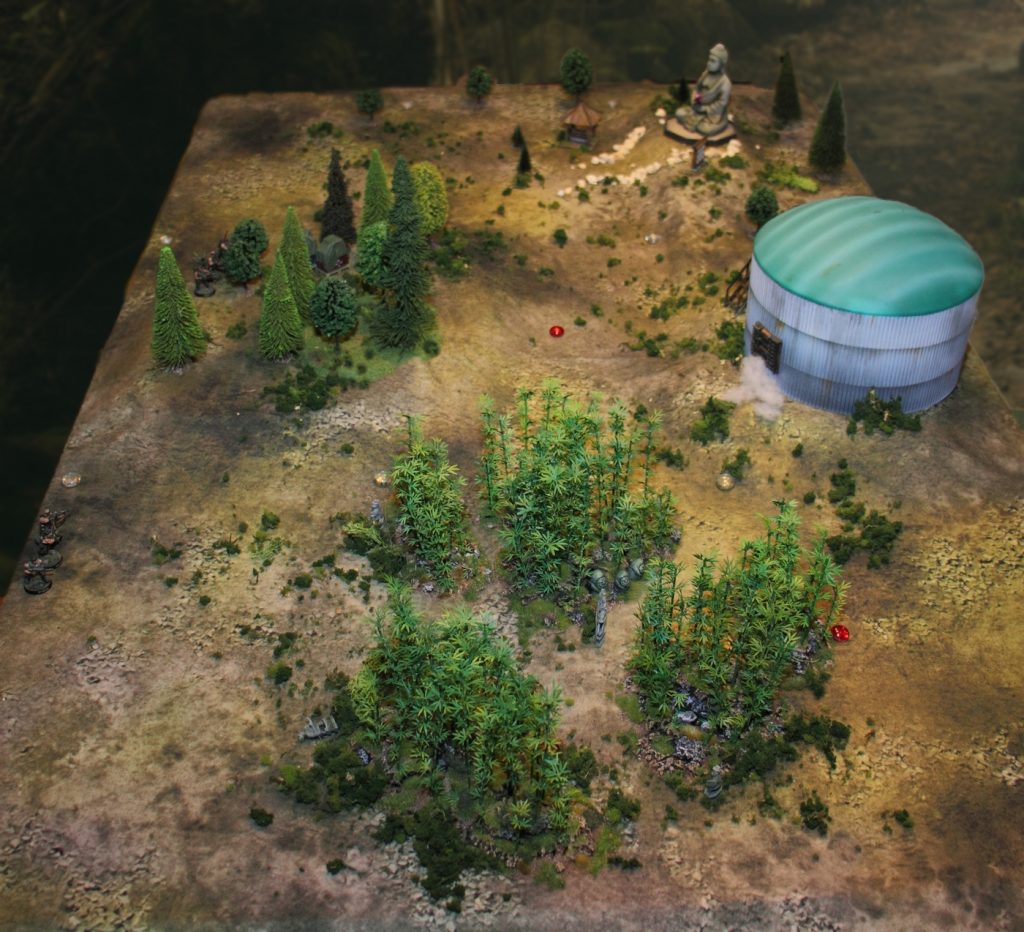 For patrol duty it’s customary to split an infantry squad into two sections of three each. Sgt.Goosio takes Lawrence (heavy weapons guy) and Hankinson (radio man) with him and enters the table behind the forest on the slight hill at the centre of their table edge. They get ready to cross the forest to get a good overview of the open area between said forest, the Preciosium silo in front of them and the Emperor statue to their left. All of them know that each year on Victory Day you’re supposed to sacrifice half a day’s ration of protein bars to the Emperor statue, so He can ensure continuous victory to mankind. 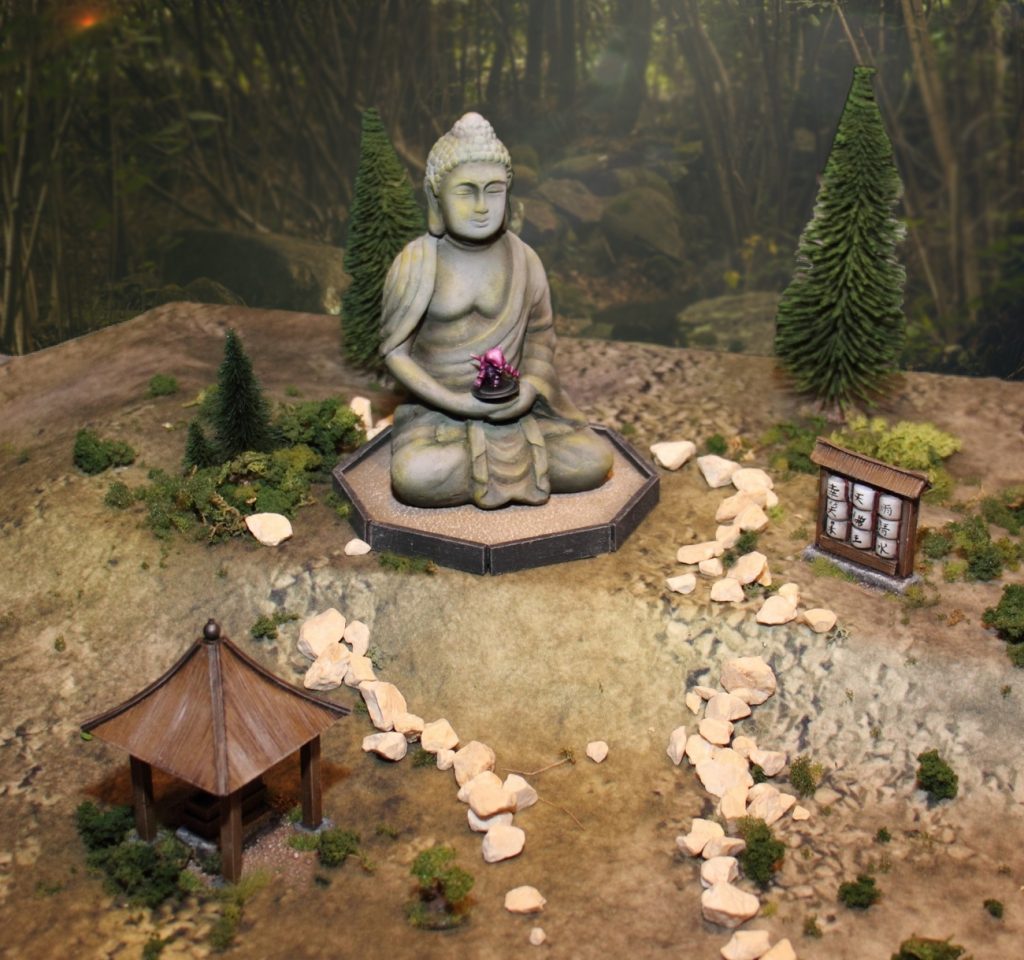 Cpl. van Dien, along with Rivera and Paul, move up to their right, keeping an eye on the dense bamboo forest in front of them. 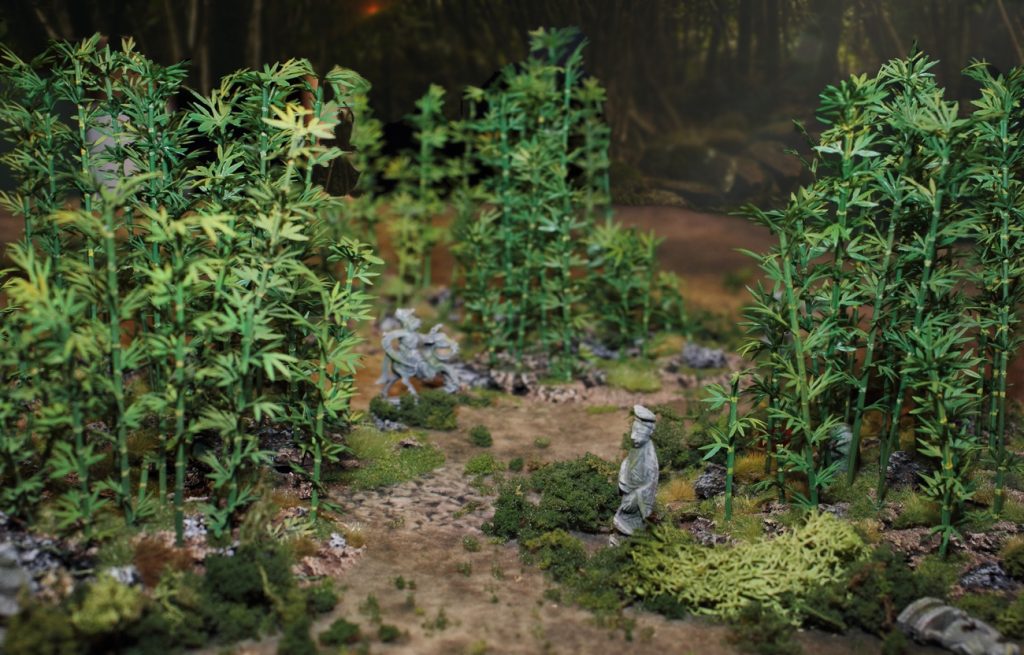 The forest is littered with statues set up by the first settlers almost a thousand years ago. Who knows who or what exactly they depict? Rumour has it that spirits guard the ancient statues. Just as the three ponder these rumours a hefty rustlin across the bamboo forest makes the men snap to. Lasguns at the ready, they fully expect a horde of vengeful spirits coming at them at any second. 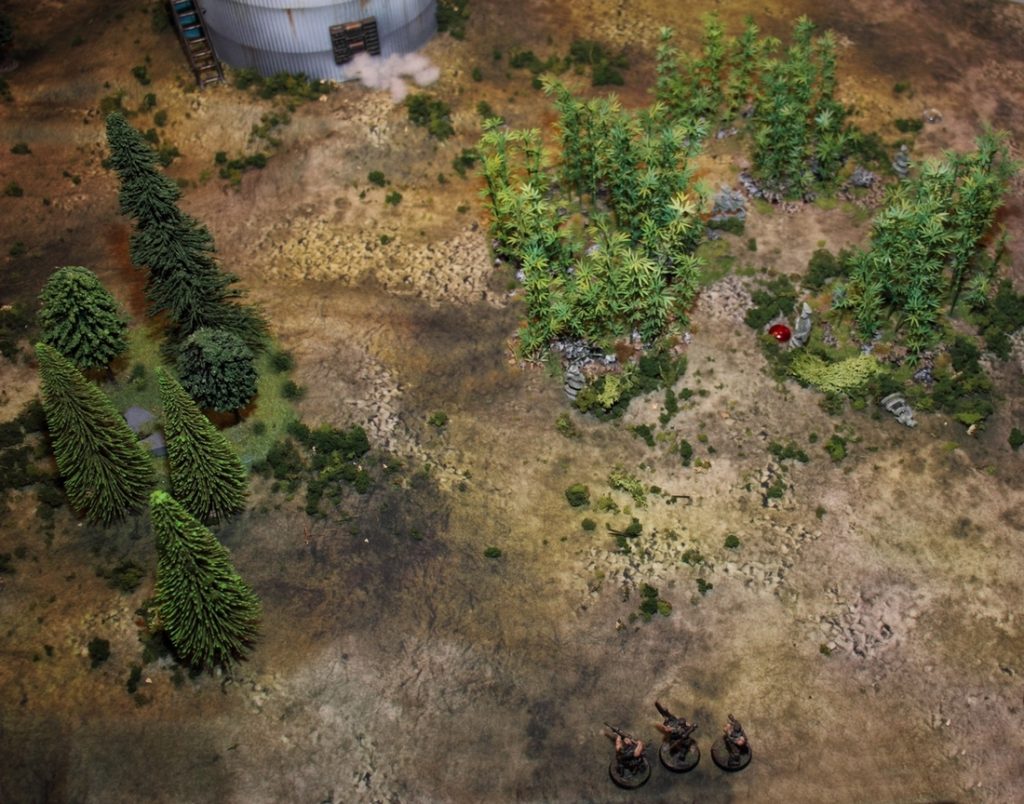 …and that was the first PEF resolution! Turns out it was nothing, but from now on chances of PEFs actually being enemy forces increases.

Just as van Dien smirks at his men about them being so easily scared they receive a call from Sgt.Goosio about a contact on their hill. They haste up the slope to help out Goosio’s section.

Sgt. Goosio orders van Dien’s section to move around the forest while him and his men would engage from the front.

The forest is a bit thicker than presumed, Sgt.Goosio’s section doesn’t get ahead quickly enough. Van Dien’s section circle the forest to their right get a look at the possible enemy force…

It’s a fully kitted-out squad of Blood Axes. And they’re dressed for war. They lose no time opening fire at van Dien’s section, who did not make cover a priority and suffer accordingly. 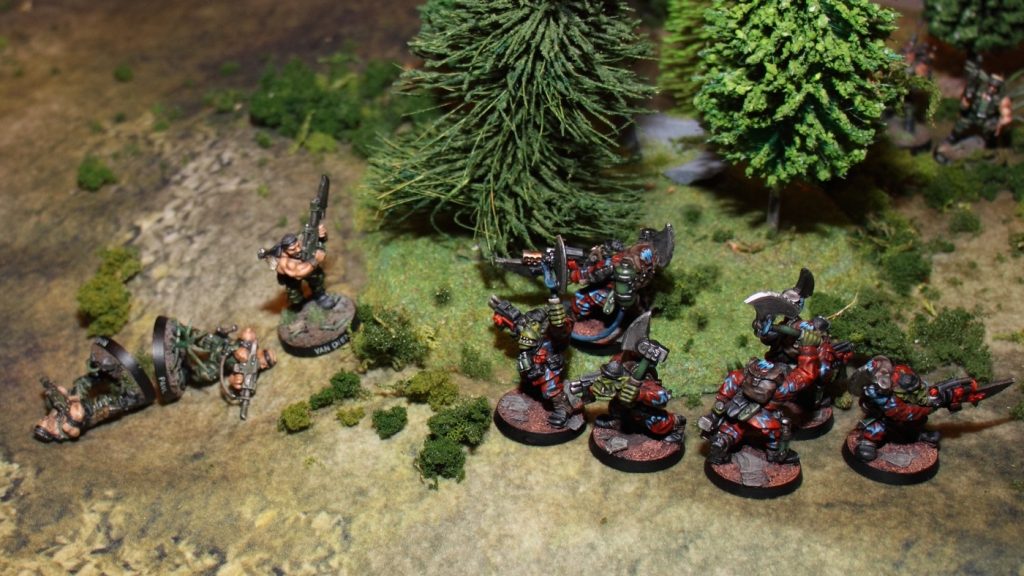 Pvt.Paul is killed outright, Pvt.Rivera gets wounded and is out of the fight as well. Cpl. van Dien returns fire, mowing down three of the Ork saboteurs. 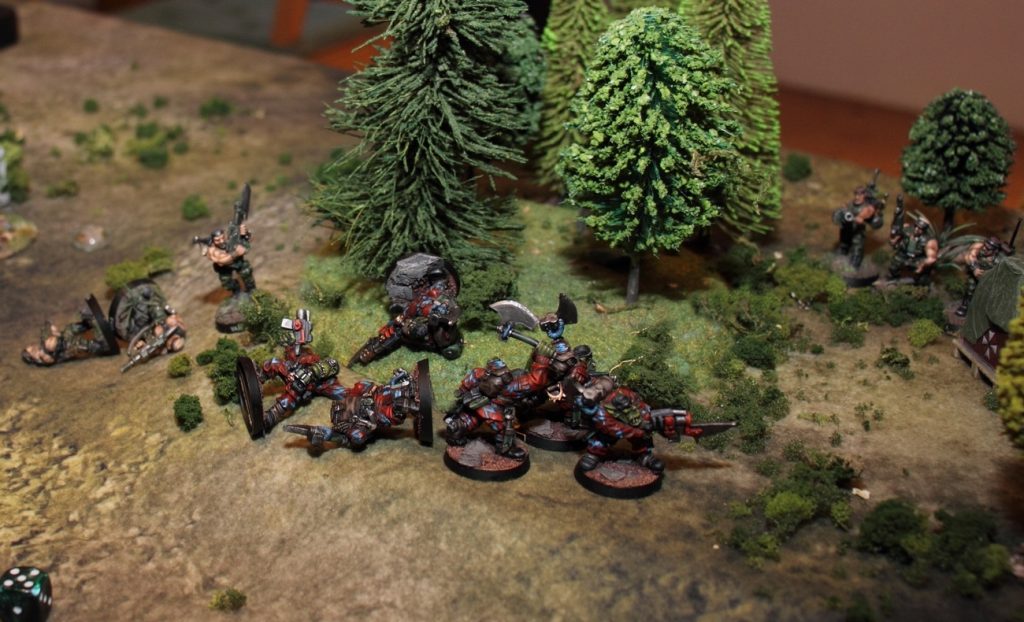 What happened here in game terms was this: van Dien and his two pals move up around the corner and get vision on the PEF. I rolled for PEF resolution, turns out it’s an enemy squad! I moved van Dien’s section so they can maximize the effect of their fire on the exposed flank of that Ork squad. I did not take into account that these chaps have a good chance of winning the reaction roll and thus get to fire first. And fire they did. Once that was resolved, Cpl. van Dien (last man standing) fired a salvo at the three chaps in front of him, all of whom subsequently went down.

Since it was still Van Dien’s section’s activation, he now got to fire once more at the remaining Orks. Automatic rifles may target up to three models as long as they stand close together.

Another well-placed salvo takes care of the rest of the Ork squad. 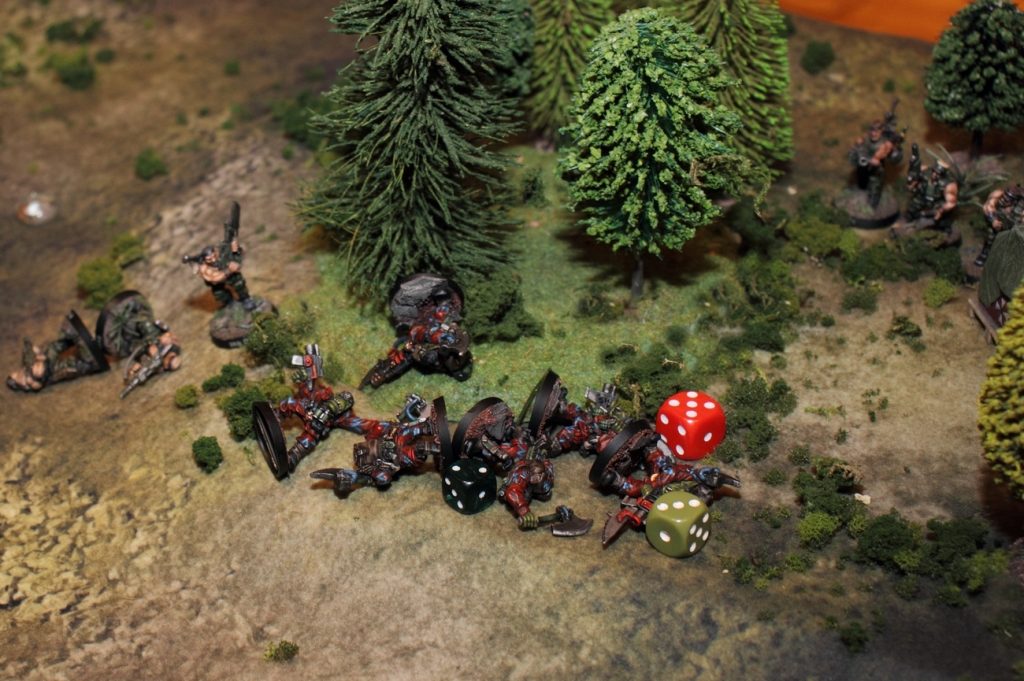 With that taken care of, van Dien shoulders Rivera and takes off into the cover of the forest for a.) cover and b.) some stern looks at Sgt.Goosio (our hero, remember?) about where the heck him and his section were. 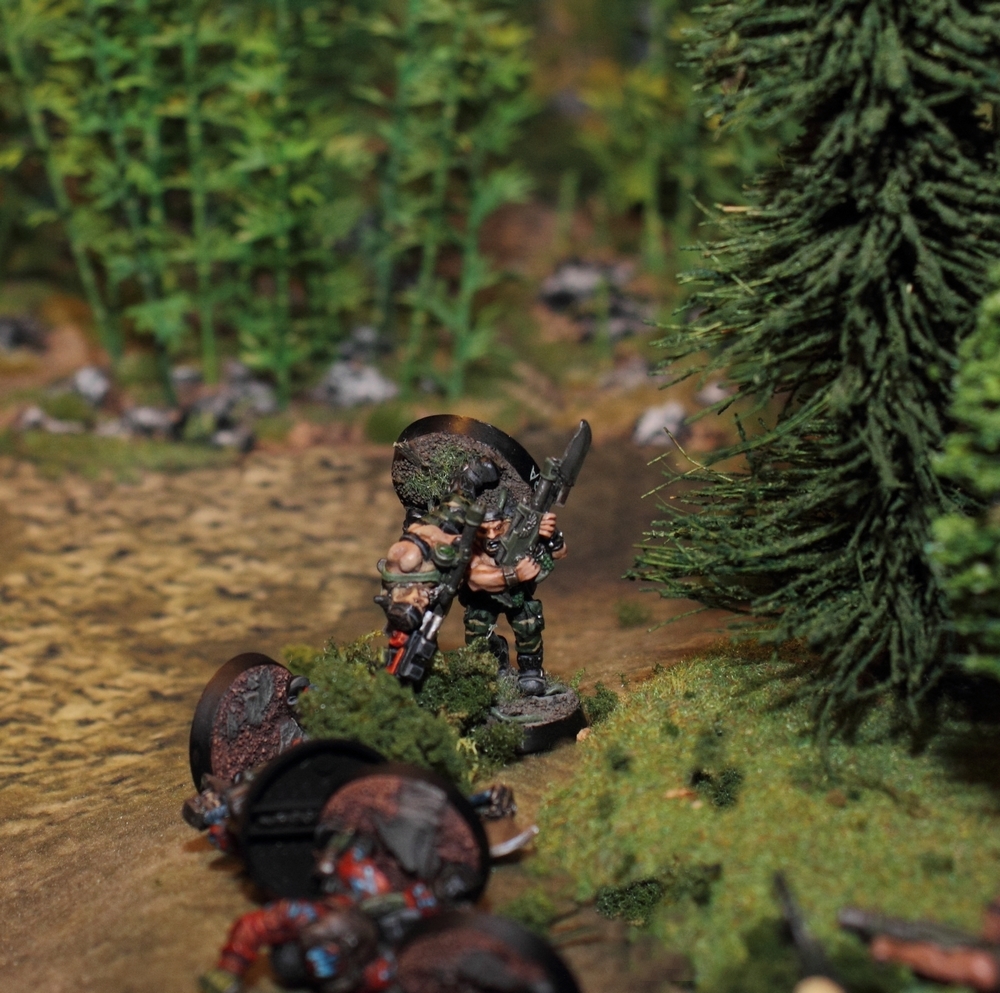 Once Rivera is in cover  the squad sits down to consider. There’s still SOMETHING out there in the bamboo forest, but Goosio has to finish the mission. So the plan is for Lawrence, Hankinson and van Dien to take position at the edge of the forest and for the Sergeant to sprint across the open field to the Preciosium silo and recon the area. 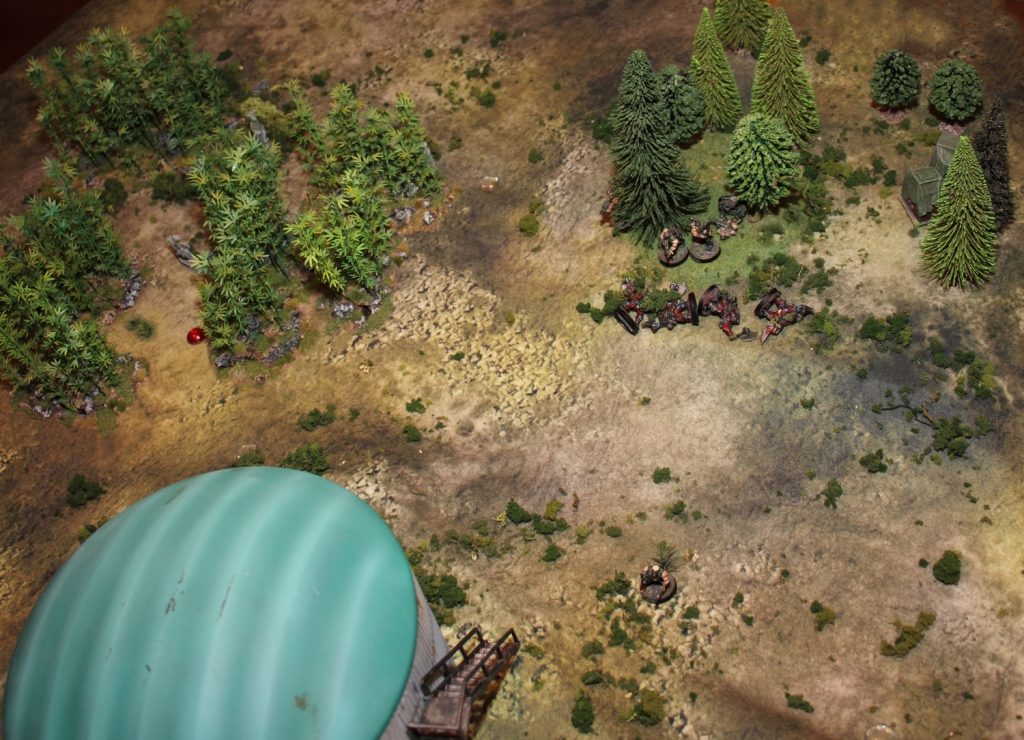 It’s not the best position to cover Sgt.Goosio’s mad dash, but better than nothing. Luckily there’s no more movement from behind the bamboo at the moment. Goosio makes it over to the silo in one piece and starts scouting the nearby area.

Meanwhile his squad mates keep a keen eye on their surroundings, scanning for enemy movement. All quiet.

Just as he is halfway back across the open field, another squad of Ork Kommandos reveal their position:

However, there’s the rest of Goosio’s squad sitting in position. 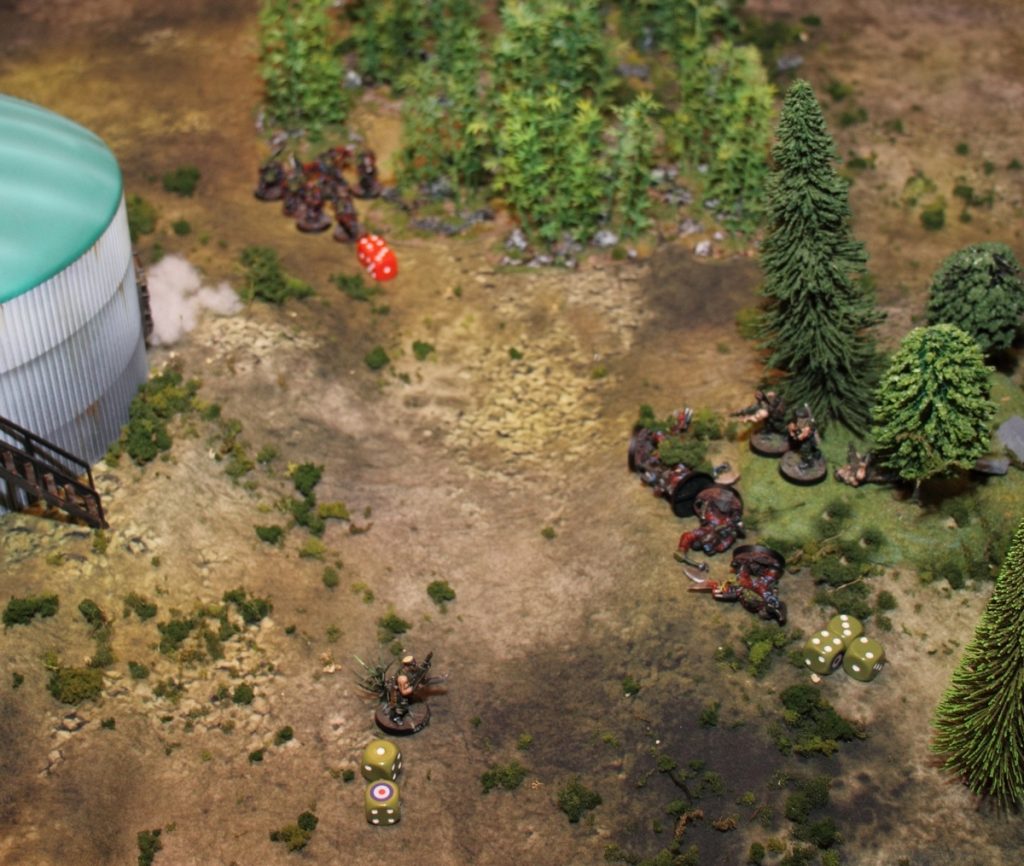 The Orks move into their sight, all parties involved (the three squaddies, the Orks squad, Sgt. Goosio) roll for reaction, the squaddies and the Orks have two successes each, the stationary dudes count as winning in that case…

Lawrence and his big gun take out two Orks and makes one duck back, van Dien wounds another one. Still, the Ork squad leader and his second in command take shots at Goosio, who by sheer luck manages not to get hit. 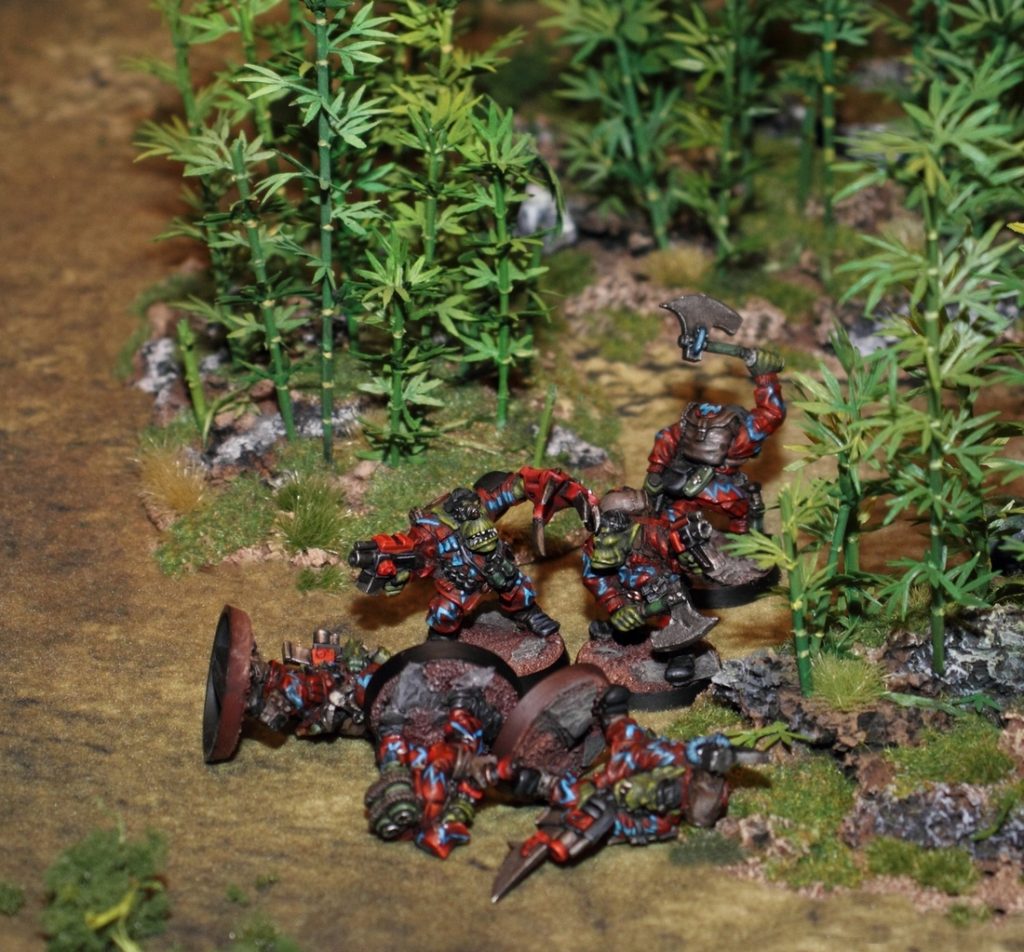 Goosio made massive use of his Star plot armour there and JUST managed not to suffer any damage or morale problems.

Displeased with the situation, the Orks decide it’s time to get out of there. They recover their remaining squad’s wounded and vanish into the jungle. 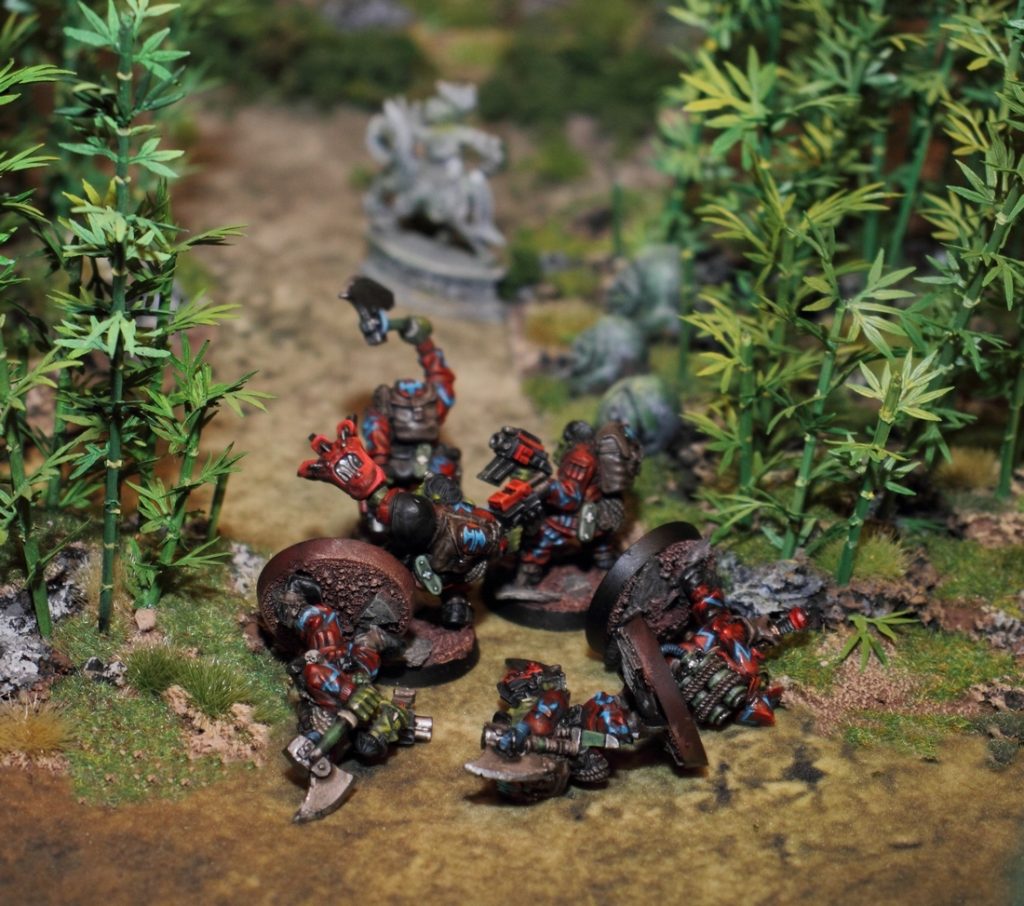 No changes to campaign morale, as patrol missions have no bearing on that. No promotion for Sgt.Goosio either, not even a 200m sprint medal.

Meanwhile Rivera is patched up and ready for action again for the next mission. 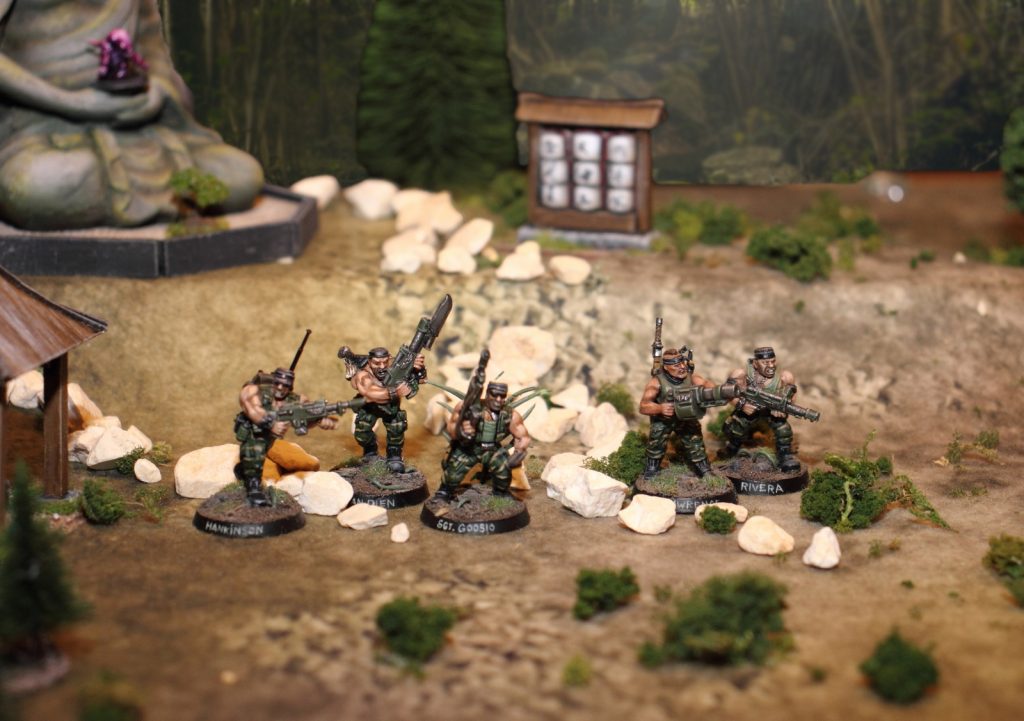 Since the area is classed as ‘secure’ now, the squad hold a little remembrance ceremony for their fallen comrade Pvt.Paul at the Emperor statue. Replacements for patrols have been denied at this point as PDF units are just getting mobilized.

Not much time for that though, as PDF forces are gathering in the sector for a first offensive against Ork-held territory…

I hope that you enjoyed this little battle report. 5150 plays really swiftly; I’m very much looking forward to how it plays with more figures on each side. I’m also considering introducing random event cards, triggered by activation rolls. Stay tuned!