Last week I had my first miniatures wargame outside of my own four walls in 15 months!

Cpt.Shandy is on a roll in organising and planning games these days. Combine that with his love of Sharp Practice he actually worked out a pretty interesting system for campaigns which he calls Star of Bravery (SoB). He goes into some detail about this system, the idea behind it, and where it came from on his blog post here.

The basic idea is that each player plays a more or less dashing young French officer in the campaign against Austria in 1809. In this case Cpt.Shandy takes on the role of an officer of a light infantry regiment, I play an officer of line infantry. For the campaign we’ll play the French and Austrian sides alternatingly, when playing the French we take on our character’s role. The campaign is planned to play out in 5 scenarios for each player, with a 6th scenario having the players fight side by side in a proper big game as part of a battle. In between games there’s chance for random events and the like. All good stuff.

So we sat down, rolled up characters and off we went to the first scenario!

I play Capt. Charles Benés of the 2e regiment d’infanterie de la ligne. Son to a lawyer who emigrated from Bohemia. During the revolution Charles made his way up the ranks to capitaine of the infantry. He’s a republican at heart, but will dutifully follow the emperor in his crusade to rid Europe of the oppression of monarchs. Charles is of average build, an honourable chap, good-looking and a charmer. Also: a skilled horse rider, even though his horse was just detached for duties underneath some cavalryman.

The goal of the campaign is to accumulate as much “Honour” as possible by doing heroic deeds in battle.

Of course there’s an excellent Sharp Practice supplement for campaign game named Dawns&Departures, but Cpt.Shandy was out to try for a slightly different approach to the whole campaign thing. This one is more akin to the Longstreet campaign system, with even more focus on the roleplay aspect and less on troop management or maneuvering. Quite fitting for a skirmish game, I’d say.

The game takes place right at the start of the Austrian offensive into Bavaria (and pretty much everywhere else). The French army is taken by surprise and have to stop the Austrian forces where possible. The first scenario is Defense in Depth as per the SP2 rulebook. 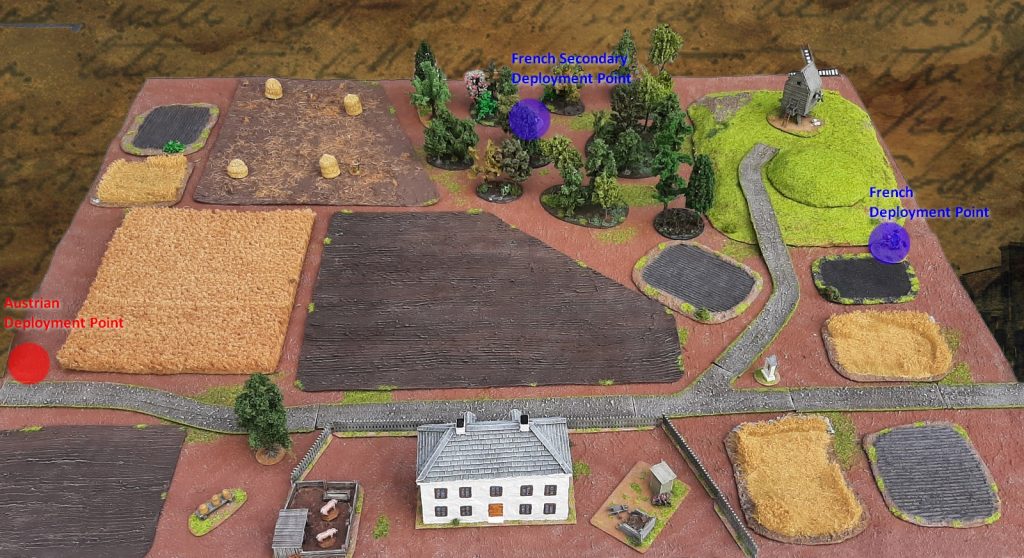 My force encompasses two units of Voltigeurs and five units of line infantry. My plan is to hit hit the enemy right away, reduce their maneuver space as much as possible and keep them from even getting a good foothold on the table.

Deployment is a tad slow. Basically all the Austrian force deploys along with their commander (who’s got a colour party, a handsome horse and a drummer with him!). However, once I deploy the first unit of Voltigeurs via the Secondary Deployment Point in the forest they’re all fired up! They unload at the Vienna Voltunteer Jägers in the field and cause light damage. Utterly convinced that they struck fear in the hearts of the volunteer troops (and not seeing the infantry line behind them) my brave Voltigeurs storm out of the forest to drive the enemy off.

The Jägers are less impressed than expected and open fire at short range. Due to a lot of luck my voltigeurs are barely scratched. 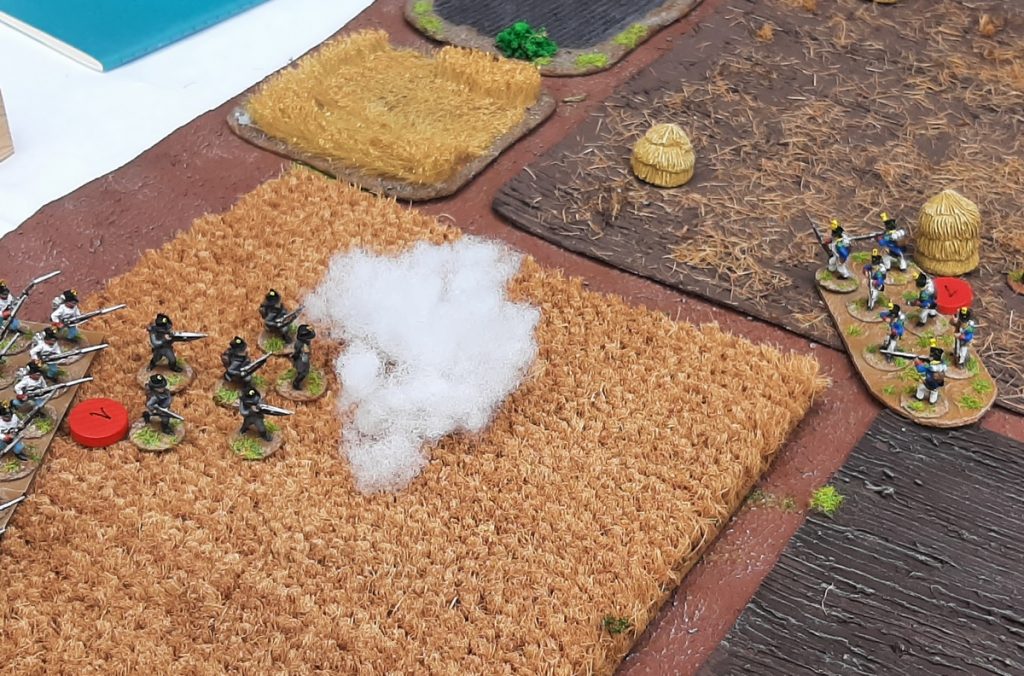 They return fire and run back into the cover of the forest. Meanwhile my second voltigeur unit deployed and give cover fire.

Here’s an overview of how the battle unfolds: 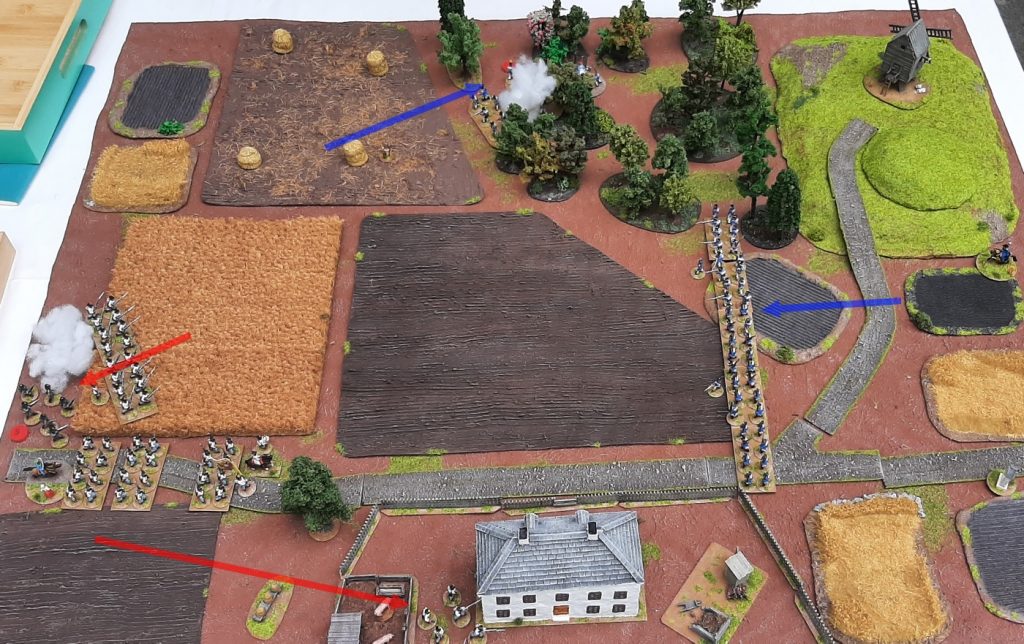 In the upper left you can see the result of the clash of the skirmishers early on: My voltigeurs make it back safely into the forest. The Austrian Jägers took quite a beating and decide to retreat behind the infantry in the cornfield and regroup.

All that business made me think it’s a good point in time to throw my own infantry into the mix and have them advance head on to gain ground. Cpt. Charles Benés is at the head of the line, backed up by his trusty second-in-command, Sergeant Guy Bonhomme.

Of course the enemy realizes that all my light troops are committed at the other flank, so the Austrian commander sends his light troops down his right flank behind the building to harass my line.

The Austrian commander deploys his three infantry groups in line, as my own big formation of infantry sluggishly advances down the road towards them.

The other two Austrian line units line up with their comrades at an angle to keep my voltigeurs in check. Scary. So one of my voltigeurs units run off to their flank as fast as they can. 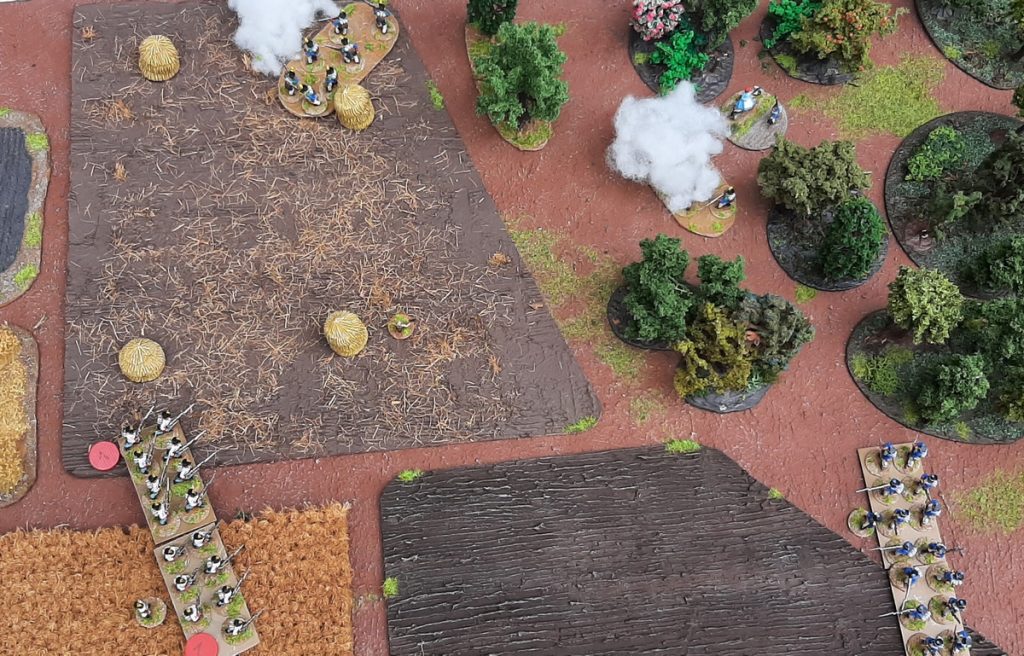 Not very fast, but just far enough to avoid getting caught. They’re currently unloaded, but soon should be ready to make themselves a nuisance in the enemy’s flank.

Meanwhile things are heating up in the centre. Ignoring the Austrian skirmishers behind the building Cpt.Benés urges his men on to get right up to the enemy and deliver a very neat salvo.

Loads of casualties among the Austrian main line, who didn’t quite manage to get their salvo off in time before the French soldiers did. Thinks are looking pretty nice right now! One or two more salvos should do the trick. The Austrian skirmishers move up behind my line to deliver very annoying fire into their rear, but the sheer mass of bodies absorbs the impact of their fire.

Then the Austrian skirmishers realize a pretty vital little detail about the whole situation: My infantry moved across the table to meet the enemy, my light troops are off way to the other flank, and the objective of the game is to take the French deployment point.

Here’s an overview after this realization, which turned the game around a bit. 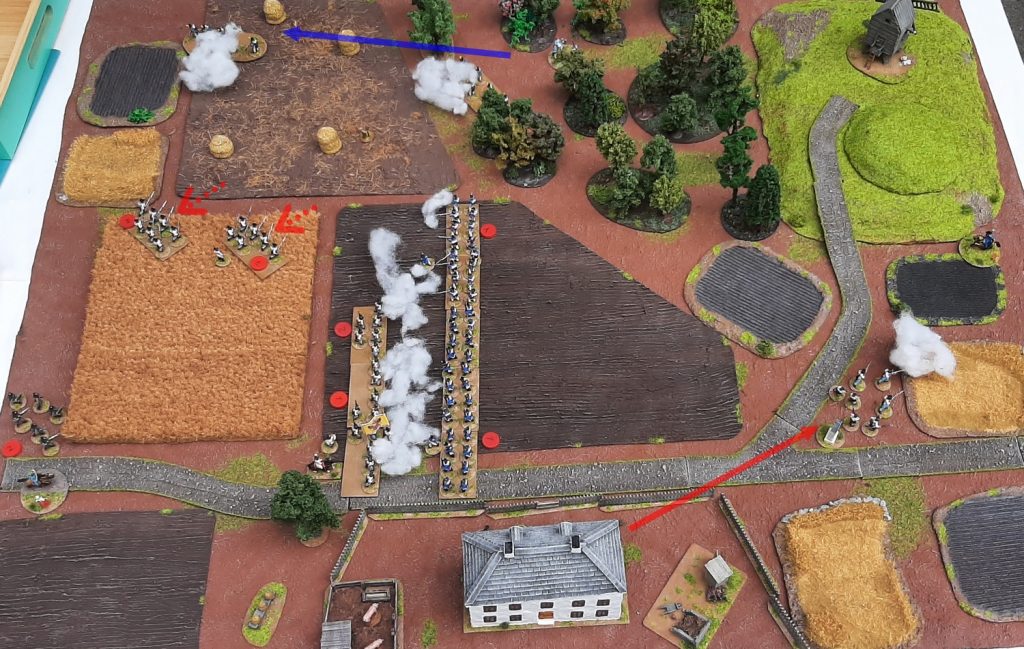 Top left: the French Voltigeurs dashed out of the forest and started firing the two enemy infantry groups in the flank until their formation broke. Way in the left the Austrian Jägers are ready for another go again and open fire at my far-off voltigeurs. Again I’m a bit lucky and the voltigeurs take just one casualty.

The Austrian line infantry units are badly battered by the French salvo. However, the Austrian skirmishers are well on their way to the French Deployment Point. Once they arrive the game ends immediately. 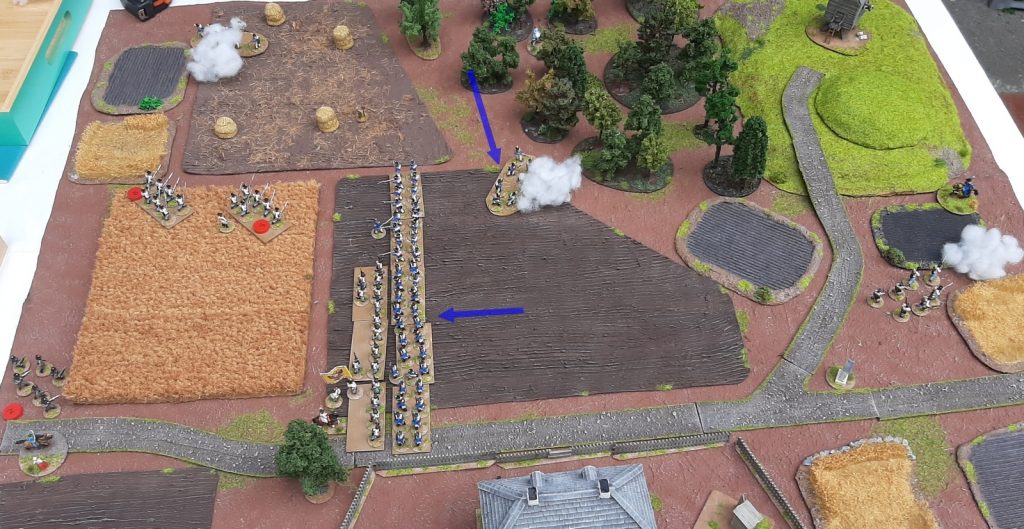 Having pretty much given up on actually winning the scenario (enemy force morale’s at 9 at this point) I order my line to charge the enemy. I want that enemy line broken, I want those colours, I want that enemy officer taken prisoner, and I want his handsome horse!

The ensuing fisticuffs are a slaughter. The enemy units are all barely, but still at 50% of their initial manpower, and they rallied their shock away. Still, my troops manage to beat the enemy’s by five. Capitaine Benés runs towards the colour party, ready to hack any resistance to pieces and grab those colours. Unfortunately the Austrian commander von Eynhuf happens to get in his way, and he’s keen on keeping his flag. It’s time for a duel! 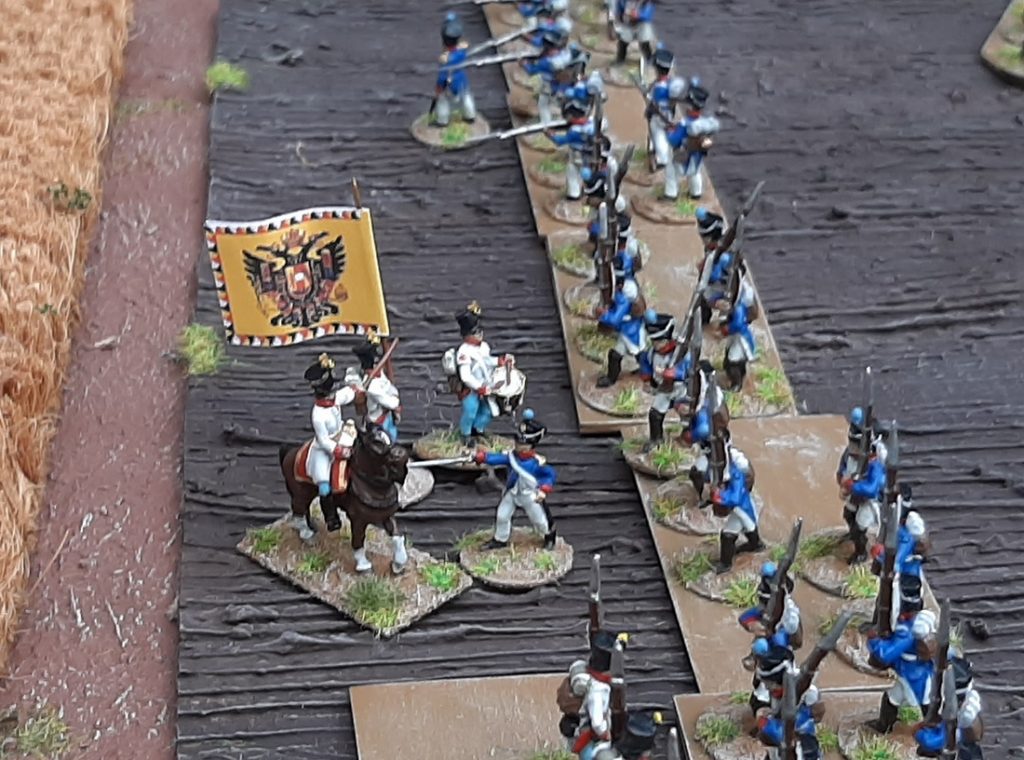 Von Eynhuf is fluent in six languages, including the language of flashing steel. The duel is going less than well. Charles doesn’t even get one hit in. Ultimately, the Austrians have to retreat, but do so with their commander intact and their colours in hand.

I really expected to get more out of this. However, by sheer stroke of luck the devastated infantry line shatters the Austrian force morale and reduces it to zero.

In the end my character managed to pull off at least one or two Heroic Deeds on top of winning the scenario. This got me a whole lotta Honour points, and even elevated good Charles into the Legion d’Honneur!

On the down side a handful of Honour points were lost again: After the duel our Cpt.Benés demanded the best of medical attention. Charles was in luck, as a physicist (Hypolite Pincecourt) happened to be nearby. He swiftly unearthed the fact that Charles’ ego was more hurt than his body. Just before that he had Sergeant Bonhomme promise to him to send a pack of letters to young ladies across France in the case of the capitaine’s demise following this bloody duel. Bonhomme returned the letters after helping his superior up without comment, but others witnessed the embarassing scene, hence the loss of some honour points.

The physicist is one of the possible random events. Each of those leads to a choice the player has to make. In this case the physicist demands help treating the wounded. My choice was to either leave them be and have someone else take care of them, arm-twist locals to do the job, or detach some of my own men to do that. The first option would have cost me Honour, on the second option there would have been a chance that the locals loot the wounded and just leave them, the third option delays the deployment of one of my units next game. Also: Hypolite Pincecourt has become a friend to my character now, so that’s good.

And that’s it! Sharp Practice is always good fun, it worked rather well for me (well, I very, very closely won, but I did, so things are well). The duel didn’t work as well. Capturing the colours and the officer would have been a great moment, but the fact that I won that game in the end AND the fact that my character was instantly called up to the Legion d’Honneur  doesn’t put me in any position to complain.

Either way, it was very nice playing a proper game again, and it was especially nice seeing Cpt.Shandy’s Napoleonic collection in the flesh for the first time. The figures look very pretty indeed. He always collects both sides, which of course makes certain things easier.

Very much looking forward to the next game in which we’ll see the debut of Capt. Camille Cruchon of the 24e regiment d’infanterie légère, and I’ll play the Austrian side. Should be very interesting, as the Austrians play a slight bit different to the French. More on that next time!

First I had a look at what I had lying around in 28mm. Then I made a medic (rummaging around in his little medic's purse)...

VHS cover for Riding with Death (well known via Mystery Science Theater 3000). The 70s film, cobbled together from two episodes of a tv show. (the elusive Robert Denby, Turkeys, Intersect, great theme music, etc.). If you know the film the insanity of the cover is striking.

So I went through the cupboard to find out if I dreamt owning a pretty ruddy Pak38 in 28mm or not. I think I did dream it, but it led to me going through and reorganizing the big box of 15mm WW2 stuff. °_° And I found a somewhat okay leIG18 in 28mm, so even better!