Time for the second game in our Star of Bravery campaign and thus time for Capt. Camille Cruchot’s first mission.

Cruchot – originally a farrier’s apprentice from a small village in central France – flocked to the ranks of the revolutionary army, as so many young men did. By merit, good looks and a honourable nature he rose through the ranks and swiftly made Captain of the light infantry. Originally an avid fan of the republican ideals, he now became a fervent follower of the emperor.

So that’s Cpt.Shandy’s character on his first command.

Springtime 1809, Southern Bavaria. Same as last time, the scenario is Defense in Depth (as in the Sharp Practice rulebook), with the French as defenders and Austrians as Attackers. Cruchot’s force is ordered to hold an important crossroads. The Austrian player (me) has to move a group into contact with the French Deployment Point, the French player (Cpt.Shandy) has to force the Austrians to retreat).

The forces are roughly the same size (French Light Infantry: 5 line groups, 2 skirmisher groups), the Austrian opposition this time is a full force of Grenzers (4 groups of line, 2 groups of skirmishers with rifles). Starting force morale is 9 for the French, 10 for the Austrians.

Here’s a top-down view of the table right at the start of the game: 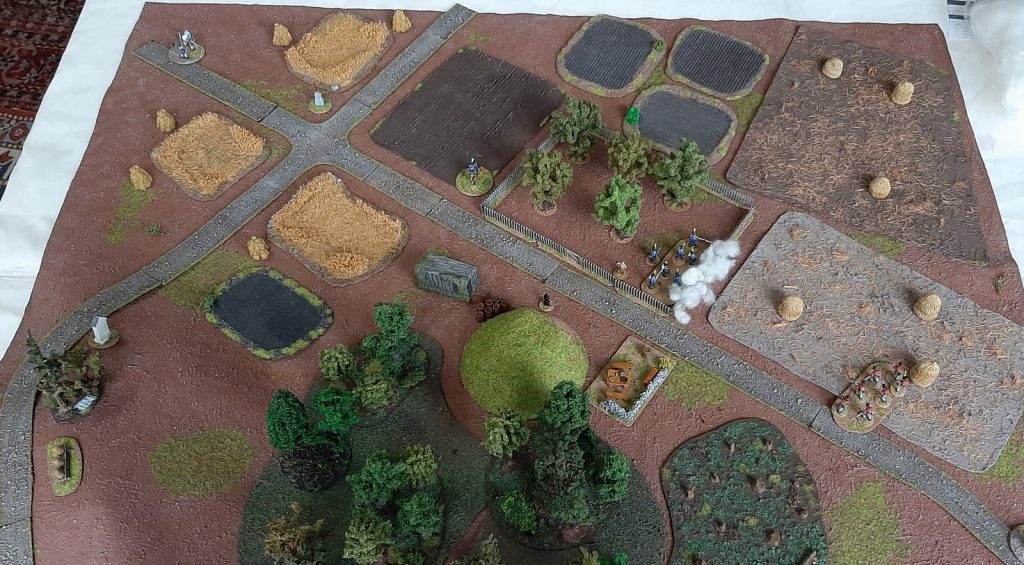 Capt.Cruchot opens hostilities by sending a group of light infantry skirmishers into the orchard in the centre of the table. A nice defensible position. The Austrian commander, Major Deček, responds by sending in a group of Grenzer Sharpshooters. The French open fire, but the crafty Croatians make good use of the terrain. The ensuing firefight (later on joined by another group of Grenzer sharpshooters) goes favourably for the Austrians and eventually the French skrimishers have to abandon the orchard under heavy losses. 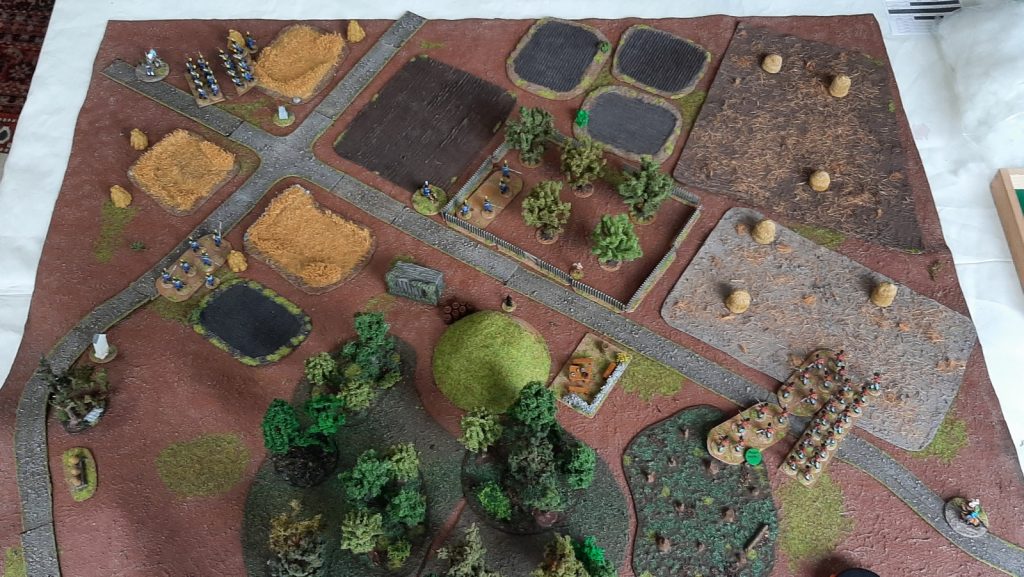 In the upper right you can see the first French line groups (of light infantry. It’s complicated.) entering the table in open column, heading towards the flank. The other flank is all forest terrain, so they don’t expect the Austrians to advance there in force. The second French skirmishers unit also deploys and goes for said forests.

The Austrians deploy two groups in line, behind a skirmisher screen.

Further unfolding: Capt.Cruchot deploys along with the rest of his line units in line. Meanwhile the Grenzer sharpshooters advance once more, dead set on finishing these French skirmishers as they abandon the orchards. Major Deček deploys along with his two remaining Grenzer units in open column to link up with his other units. Maybe they could form up with their comrades and form a big old line to attack the two infantry groups at the top centre before the rest of the French catch up to them? The Austrian Major is majorly concerned about the numerical advantage the French hold over them in terms of line units. 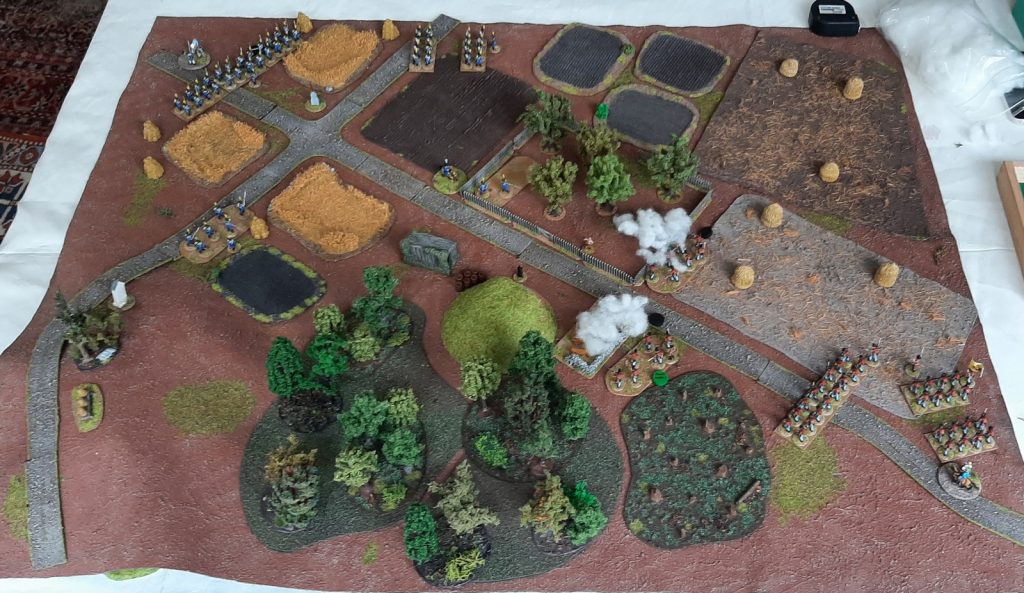 Nope. In a textbook maneuvre (and record time) Cruchot forms his units up in a proper scary line. All of a sudden my two line Grenzer units at the centre look a bit lost. Deček sends one of the sharpshooters units up the right flank to harass the behemoth of a line. They won’t do much, but maybe they’ll manage to take out an officer?

Meanwhile the intact French skirmishers units zips around the Austrian left flank and deep into the forested area. Another concern, and keeping Deček’s two units from linking up with their comrades. They pivot around, form line and advance to open up the left flank by throwing those skirmishers out of the forest. 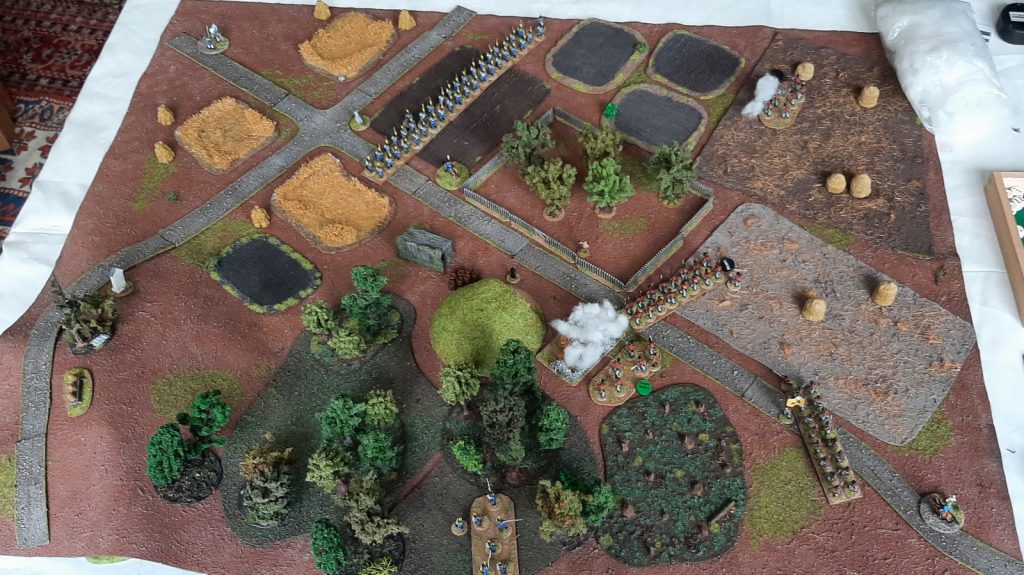 I decided not to remove the Grenzers line from behind the orchard’s fencing, because I expect the French line not to fire at anything but close range. I have the men present and make ready to fire (mainly to keep the occupied so they don’t think of running away). Bit of a miscalculation on my part.

My two line units are caught in a torrent of lead. No direct casualties, but loads of shock. Long range and the little cover the orchard gives saves my guys from worse. The line holds on a wing and a prayer.

Meanwhile in the forest at the left Austrian Flank things heat up as well: The few remaining men of the first French skirmishers group set up next to their comrades in the forest. My sharpshooters find their barrels not to be too fouled to mount bayonets. They charge the skirmishers who are heavily outnumbered and surrender. Their leader, a certain Sous-Lieutenant Pierre Merlot, is captured and led off the battlefield. 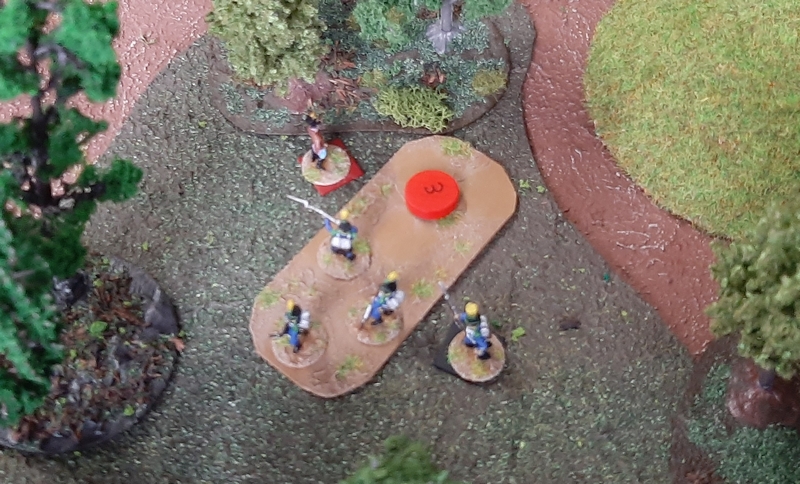 The result of this episode is that French force morale takes a hit, their remaining skirmishers get reduced and their leader is knocked out. On the other hand my advantage in skirmish troops is negated, and I’ll have to keep Deček’s line infantry around there to keep the handful of enemies from breaking through.

The Austrians from behind the orchard have to retreat, else they’d get shot to bits by the French line. Seeing this, Cruchot detaches two units from the line to send them back on their original mission of advancing down the left flank (top) to envelop the Austrians.

The remaining French line units fire a salvo right in the backs of the retreating Austrians, but as by a miracle they cause no damage what so ever. Then something interesting happens: The French main line runs low on ammo, meaning that for the rest of the game they may not fire further than short range, meaning no further than across the orchard. They also fire uncontrolled now, so these three units of line sit there, and my guys might manage to get around them and to their objective. 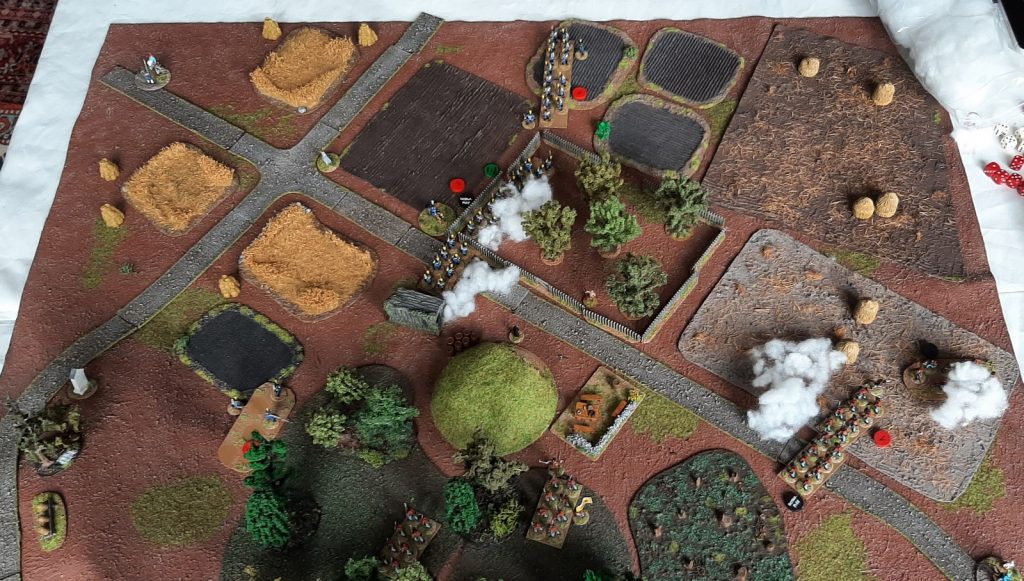 After the problems in the forest I started sending the Grenzer sharpshooters fom the right flank down towards the forest. After the latest developments (the main French line being paralyzed for now) they turn around to keep harassing the French flanking force at the top centre.

This changes the whole dynamic of the game: Cruchot starts redrawing the battle plan, orders the flanking force back personally, detaches single groups to meet the Austrians who advance through the forest. Orderly, modern warfare seems out of the question; now it comes down to cold steel. He sends a group from the main line straight into Deček’s group. 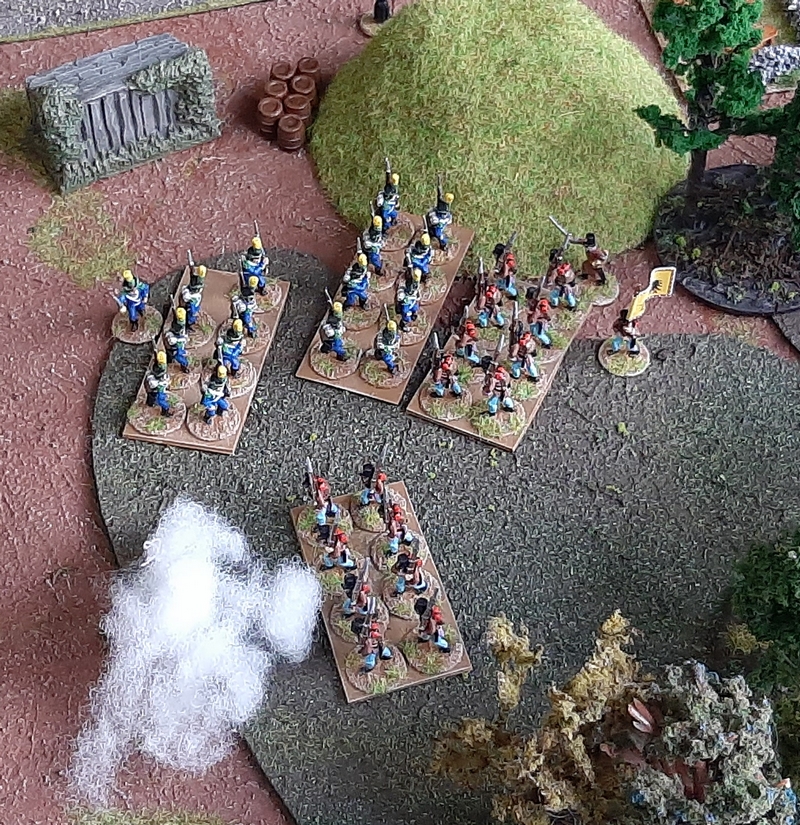 This first wave of attack is beaten back without too great casualties on the Austrian side. 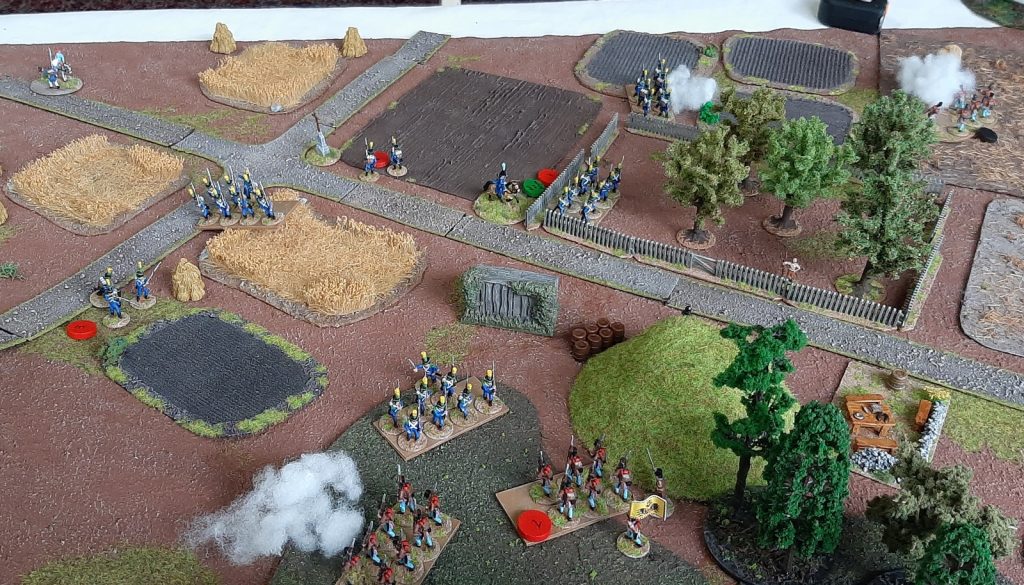 Capt.Cruchot is keen on grabbing the Austrian colours, so he leads the next attack himself: 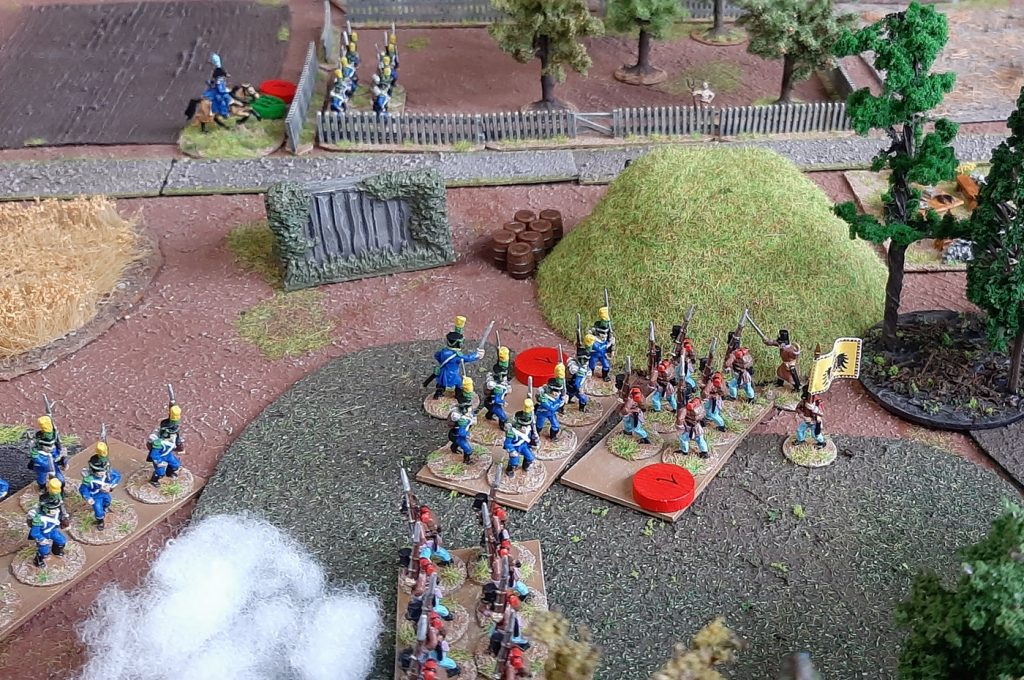 A bloody mêlée ensues, in the end it comes down to Cruchot and Deček, in a duel for the colours.

…and again, the French officer is no match for the Austrian major when it comes to duelling. 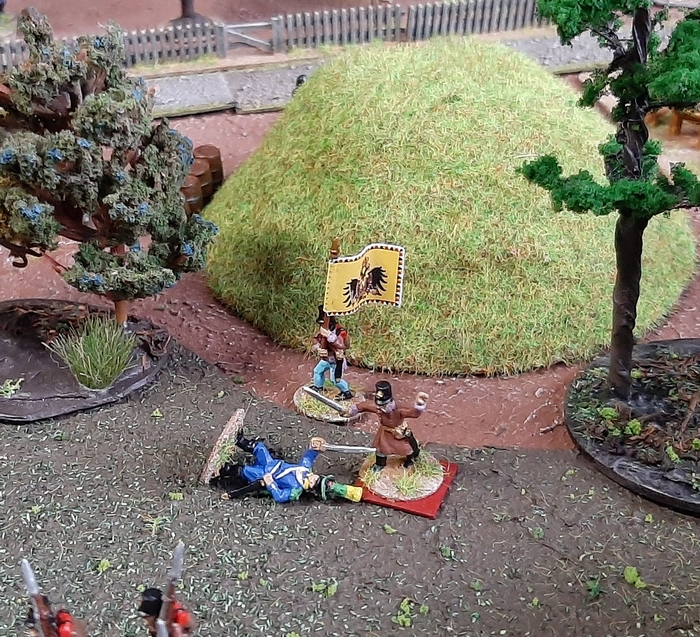 The French force morale is down to 1, Austrian Force morale sits at 6.

We decide that it’s an Austrian Victory!

Well, that didn’t quite work out for the French. Of course having the majority of the firing line essentially taken out of the game half-way through by a nasty combination of uncontrolled fire and low ammo is quite a blow and it really shook things up.

It was a long and hard-fought game. Overall, Cpt.Shandy had a bit of an edge on the activation cards, and I had some really good dice rolls (especially early on in the skirmisher fights and in the late mêlée). That one big salvo in the backs of my already-shaken line Grenzers not doing anyhting was just dumb luck. If that one had done better things may have looked different. Funnily enough, the French having one line unit more than I did weighed heavily on me. I felt I HAD to take out their skirmishers to be able to get that objective, but I didn’t quite manage to to do that in time.

There is no such thing as a normal game of Sharp Practice, a wise man once said, and that’s true. However, in most games there’s a point at which one side’s force morale starts rattling down. This game lacked that moment. Instead, there was a glacial grind, only really being decided by the mêlée in the end.

The campaign phase didn’t bode as well either for our friend Camille Cruchot: He got wounded during the duel and taken prisoner. Will he manage to escape? We’ll see next time!

Hope you found this battle report entertaining and interesting. Stay tuned for the next game!