Now that we’re back at the gaming table (at least outside), we tried something new. Virago put his long-standing plan of adapting What a Tanker! for Mech combat on paper and we had a go at testing those rules concepts.

Virago is a seasoned veteran of the Battletech universe, so is Cpt.Shandy. I learned everything there is to know about the human condition and giant robots from watching Neon Genesis Evangelion. I assume that Battletech isn’t that different.

On a more serious note – I am of course intrigued with that universe. I like settings which have been around for a long time (longer than marketing was the determining factor in these niches), which are complex and may be described on the internet as “impenetrable”. Which means you have to sit down and read for more than 2 minutes to get a general idea. I like the robot designs and the little bits I know about Battletech. And I like the pretty pictures and vague memories of a wall of books at my old LGS.

Here’s the design idea: It’s all based on What a Tanker!, because those rules work, and work lovely. They’re fast, fun, they’re versatile, and can be played as multi-player games. The original Battletech rules (through the ages) irk Virago with too much detail, hence the decision to go with this. I’ll use some moments from the two games we had that night to illustrate the rules as they stand right now. 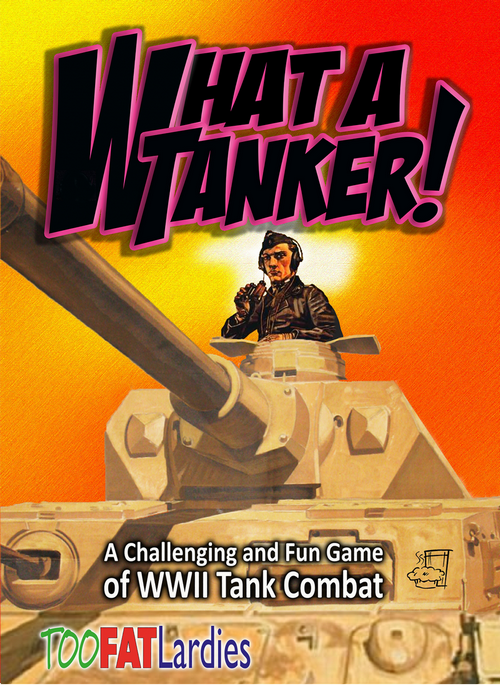 We set up a table, set up a mech each, and asked ourselves “So how does What a Tanker work again?”. It’s been three years since we last played after all. After some swift rule-reading we were right back in the game. 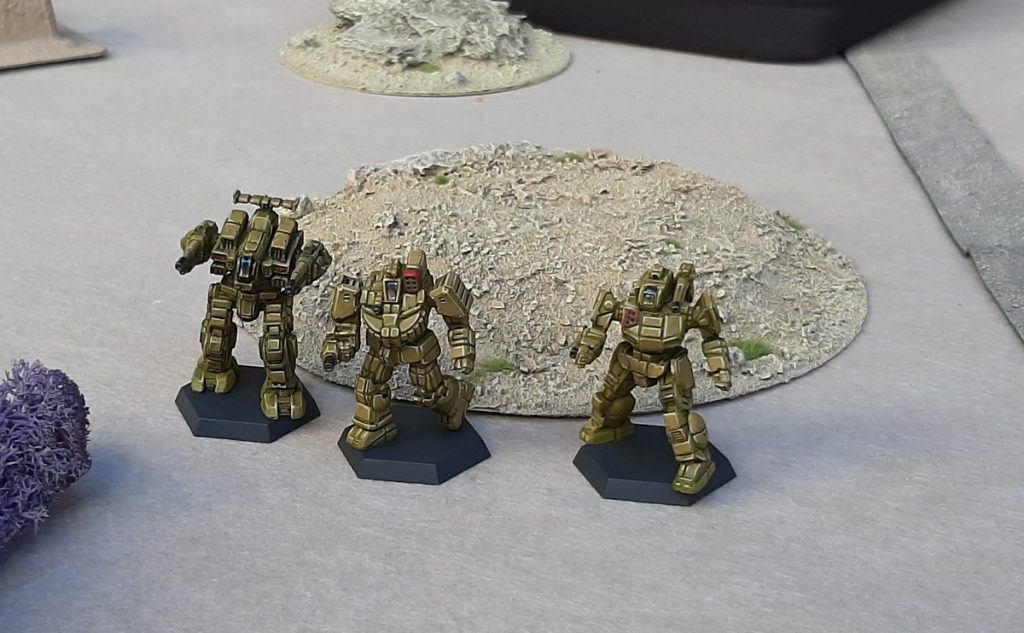 Here’s some of the house rules in action: Movement Dice and a Heat Token. 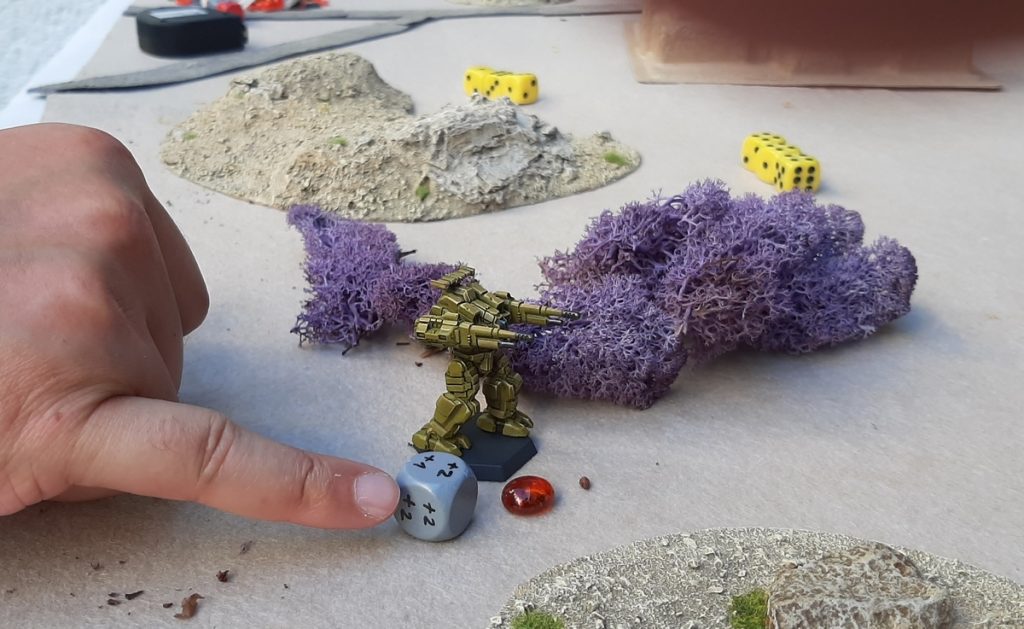 One thing about What a Tanker we always slightly missed was to-hit modifiers based on movement. As far as I’m aware that was left out of WaT to keep it simple, and because the scale of the game doesn’t call for those modifiers. That’s perfectly okay. Still, on What a Mecher! (working title, by the way. Let me know if you got a better one!) Virago added to-hit modifiers based on how much the mech moved that turn. The upper number indicates the modifier to the to-hit target number for the mech itself, the lower number is the modifier on fire directed at the mech. In the picture here we got a heavy Rifleman mech. The machine moved 5″, making it already harder to hit (+1 to the target number), but also harder for the mech to hit targets (+2 to its target number).

On top of that the movement generated  a Heat Token (the red glass drop thing). Heat management is a big part mech combat in Battletech, so Virago added rules for that, expressed in heat tokens. Firing guns will build up a certain amount of those, running around will as well, and so on. These heat tokens can be used by your opponent to make life a nuisance for you. The idea is based on Saga’s fatigue markers; a mechanism I’m rather fond of.

Heat tokens can be used to make life harder for the mech pilot (removing the heat tokens in the process). In extreme cases they also might lead to a system shut-down or even cause the mech to overheat and explode (unlikely as it is). Electing not to move or not to fire on their turn, a player may remove heat tokens. 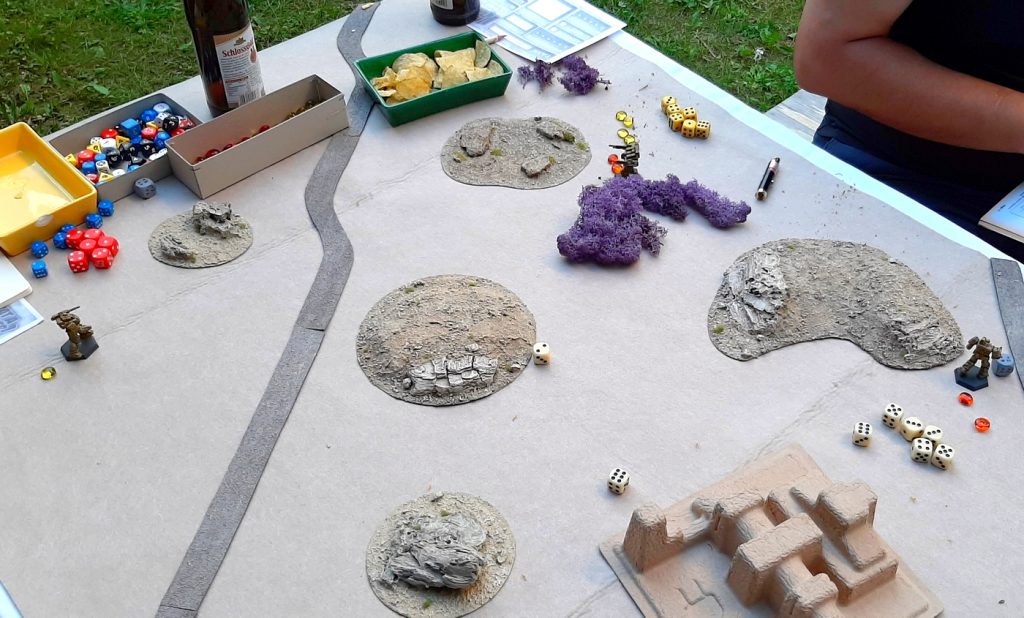 Firing is handled just as in What a Tanker!, with the exception that Virago introduced four range bands. Each mech (depending on type/armament) will roll a different number of Punch dice at the various range bands.

Due to the on-going firefight between the two the two mechs are building up heat (Virago’s does, Cpt.Shandy’s firing at that range won’t due to lower-powered guns), but also yellow Ammo Tokens. Each time a mech fires it gets an ammo token. At any point an opposing player may have the owning player roll a die for each ammo token. Double sixes means that the mech ran out of ammunition.

The two others kept shooting at each other, while my nimble Wolverine ran up the flank. Eventually, Virago’s Rifleman mech with its bit laser guns got a lucky hit on Cpt.Shandy’s mech and it blew up. Right then my mech arrived behind Virago’s and opened fire at its wafer-thinly armoured back. 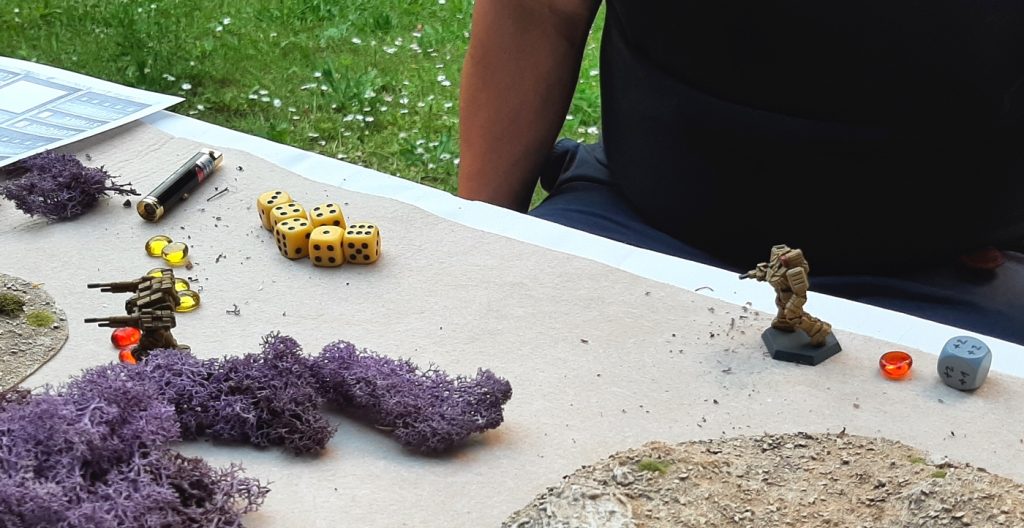 The first salvo wasn’t effective (due to the hefty modifiers due to my mech’s speed at arrival), but the second salvo blew the Rifleman up. 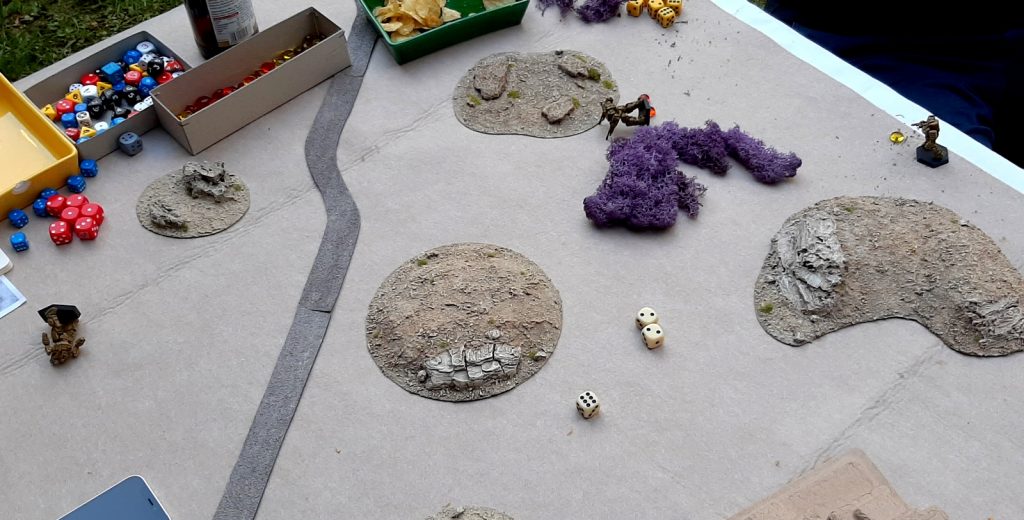 …and thus our first test game ended. Interestingly, we had immediate blow-up results on both mech deaths rather than slowly shooting bits off each other. So we quickly moved on to another round, without any changes to the rules for now.

A similar set-up, all we did is change the terrain around a bit and we switched mechs.

This time Cpt.Shandy’s mech had to take some hits right from the start, two critical hits to the legs, which made his already slow mech even slower to move around. This followed to ‘head shots’ (double sixes on the to-hit roll). Ad hoc we decided to treat those as hits to rear armour.

Meanwhile, I was dead set on seeing big giant robots punching each other, so I ran straight for Virago’s Wolverine, arms flailing.

Close combat is pretty simple. If you’re familiar with close combat in Ronin or the duelling system from Sharp Practice 2, you’ll know how this works: each mech’s got a pool of dice they secretly allocate to attack and defense. The attacker rolls their attack dice, the defender rolls their defense dice, the highest result on a single die wins and either does damage or not. 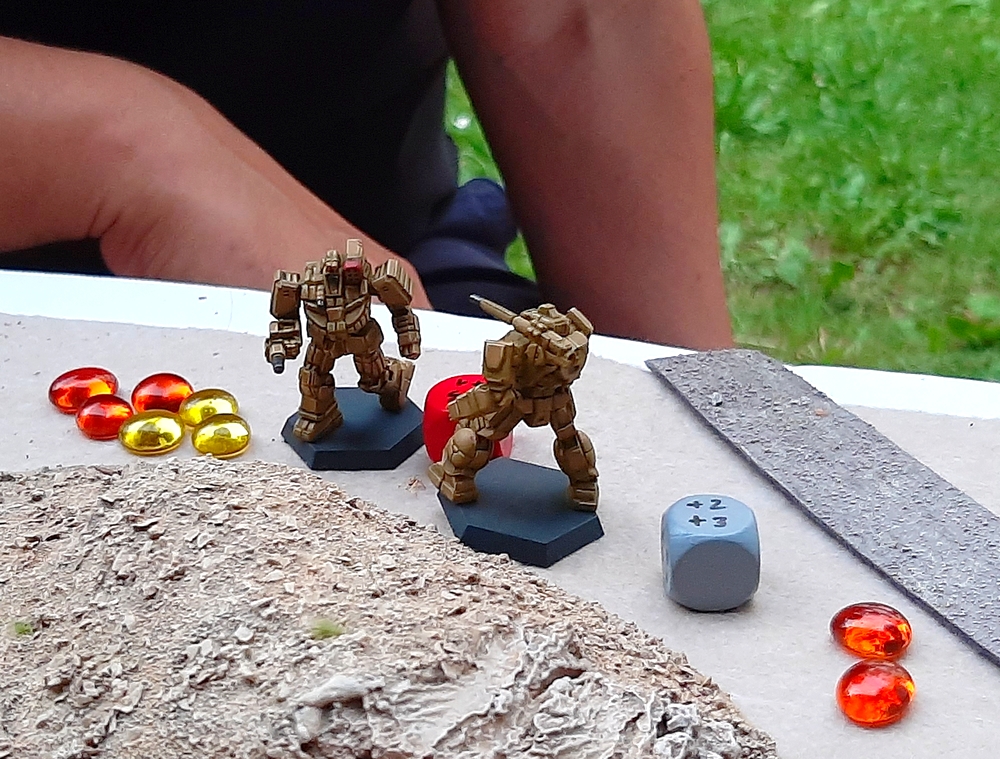 My heroic charge ended in very little result, but that didn’t stop me from trying to get a proper punch-y kick-y robot fight. At some point Virago’s mech took a temporary damage. In turn he kept jumping behind my mech, firing at my back. luckily the heat build-up and general modifiers from jumping helped avoid disaster. Then I took one temporary damage and a critical hit of some sort, I had to retreat. Shortly thereafter Cpt.Shandy, finally made it around a dune and blew up my poor mech.

This time we had much fewer instant kills, but more gradual build-up of damage. Virago made very good use of his mech’s ability to jump around a lot. Cpt.Shandy was unlucky in that he got two pretty bad hits early on. Close combat is more of a last resort rather than the way to go, it seems.

Maybe I’m forgetting about some of our findings (Cpt.Shandy wrote down points in his notebook), but overall it played really well. Giant robots go clank-clank-clank-ratatatatatata-pew-pew-boom is cool. That’s my main points to take away from that. Aren’t you glad that it’s me of all people who writes this blog post? 😀 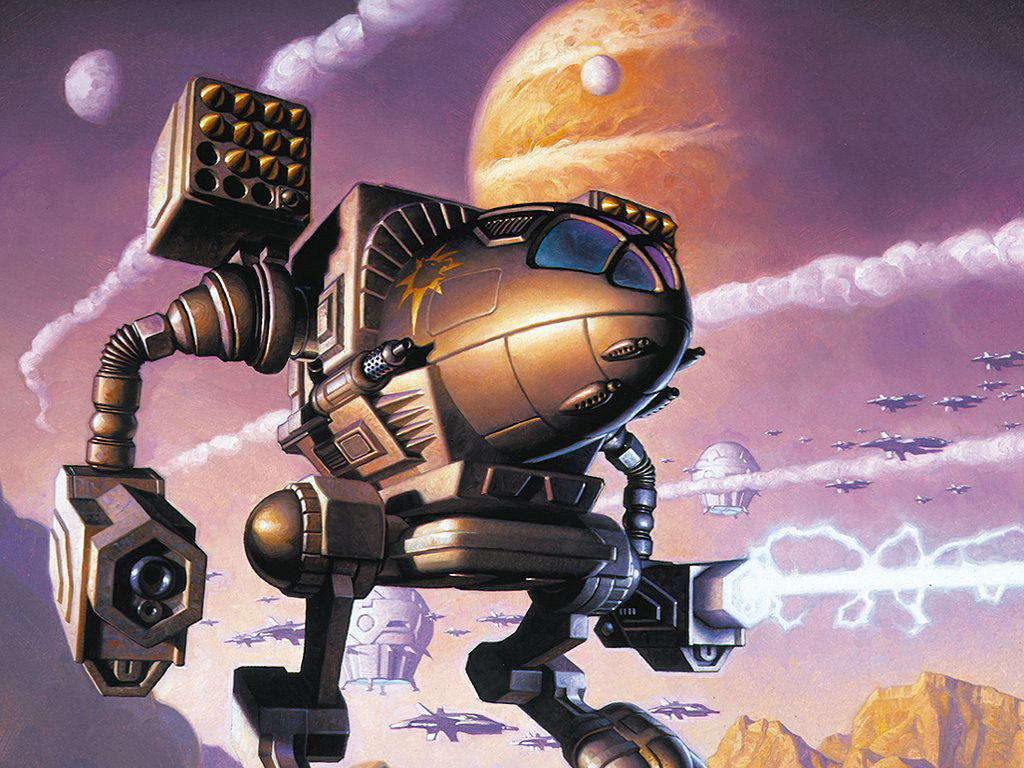 The main point we’re not sure of yet is when exactly to remove the move modifier dice. Other than that, I think most things went really well. I like the heat management a lot, and it seems to work very well right now. I’m not entirely sure if jumping as it is right now isn’t a bit too good (given how movement works in WaT); we’ll have to look into that. Of course there’ll be some fine-tuning to do between armour, punch dice, and so on, but for now it seemed to work nicely.

I also remembered our main take-away from earlier What a Tanker games: We have to get turn order cards or tokens for our next game so we remember who’s going when. Probably not a problem between two players, but with more than two mechs/tanks on the table and if turns take a little longer due to us not being just as familiar with the rules yet it helps having initiative tokens.

But it’s been cool. Looking forward to keep on testing that What a Mecher (working title). There’s a lot of potential there.

6 thoughts on “What a Mecher!: Playtest”

"WITHOUT GOOGLING
Name something every muppet can name"

Is one of those things should get insta-muted. THIS is how Twitter moderation automatization should work.

I'm in bed, post-op, but dropped in to remind you that our joint INDIEWINTER10 promo ends midnight tonight. Check @BadSquiddoGames @Exit23Games @FenrisGames @Fogou_Models @second_thunder websites where you can use the same code above to grab a nice discount and Support Small. https://twitter.com/FenrisGames/status/1597330386191015936

Having briefly re-opened post teaching, the Fenris workshop's now closed again for a couple of days. Got a minor surgical op tomorrow and won't be fit to do much beyond sit up in bed. Keep those #INDIEWINTER10 orders and RC2 Pledges coming in!

Buncha days with @Ghostery 's "Never Consent" function - yeah, it's supergood and improves life. Only sites it doesn't seem to work on is Twitter and Google. Still, there's no reason I could see to not use this browser extension.