Last time we saw a close defeat for our French hero Capt.Cruchot by the hands of the Austrian attackers. Cruchot and his friend Merlot were taken prisoner by dastardly Grenzers. The prisoners are taken behind the lines for interrogation via wagon train. Sous-Lieutenant François Bouffard of the 13e Chasseurs à Cheval reports sight of the train moving towards Peising via a small road through Fürstenholz forest.

Capt.Charles Benés of the 2d regiment d’infanterie de la ligne decides that it’s time for a daring rescue mission, has his men make ready to prepare an Ambush. 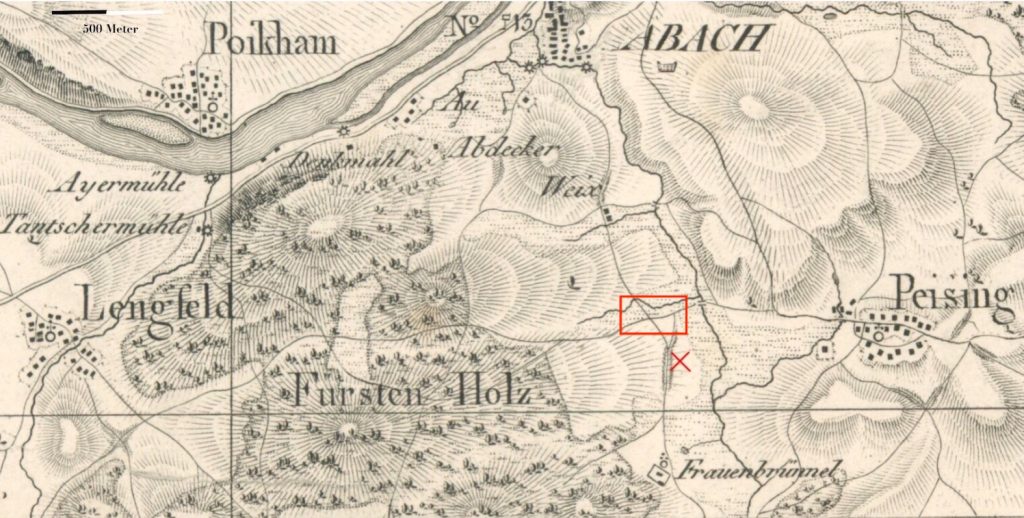 Cpt.Shandy, playing the Austrians again this time, prepared a map and let me choose a point at which I’d like to ambush the wagon train. Beforehand he let me know that this time my infantry would be accompanied by a group of Chasseurs à Cheval. Neat. I chose a point of ambush accordingly, behind a little hill to hide the men and reasonably open terrain for the chasseurs to move around. Based on this, Cpt.Shandy worked out what the table’s supposed to look like and set up terrain. It’s really nice if someone does all that extra work. Makes things more real and all.

The Austrians start the game by entering the table via the road in the upper right. Three groups of infantry, led by evil Major von Eynhuf (who lost the last battle against Capt.Benés, but gave him a sound thrashing in the ensuing duel), head the escort, flanked by two groups of Grenzer skirmishers. Two more groups of Grenzers in line form the rear guard. 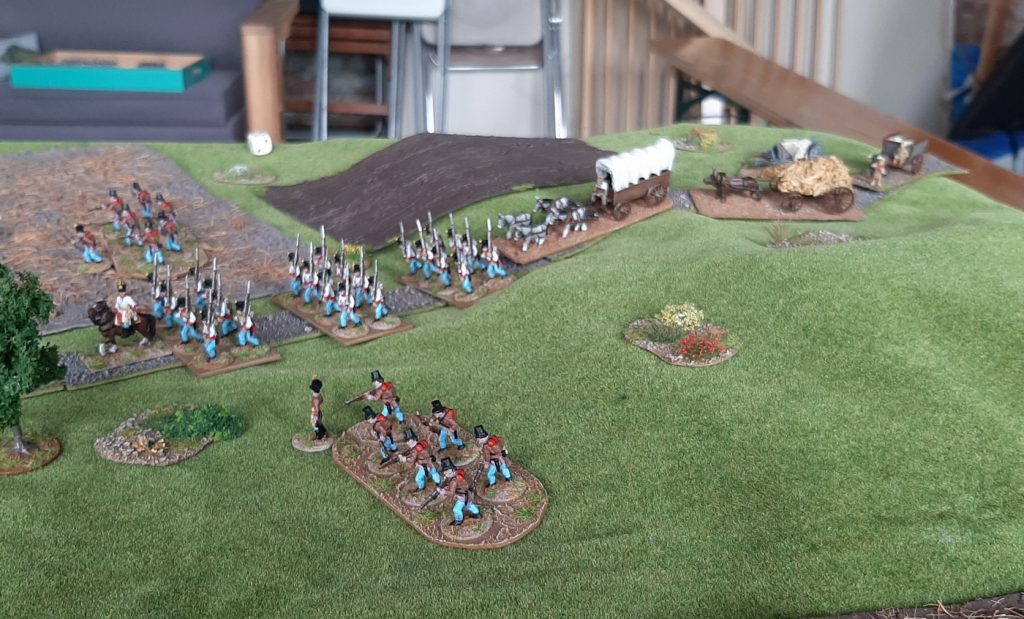 I was pretty on edge about when to deploy my force. This was an ambush after all, and getting the correct moment is a pretty decisive matter. The cards didn’t help either as I got four command cards (= double activation for a leader) twice in a row. The first time I resisted, the second time around I just couldn’t hold it any more.

I send in the line infantry to block the road. All five groups at once, led by Capt.Benés, along with his trusty lieutnant Bonhomme. 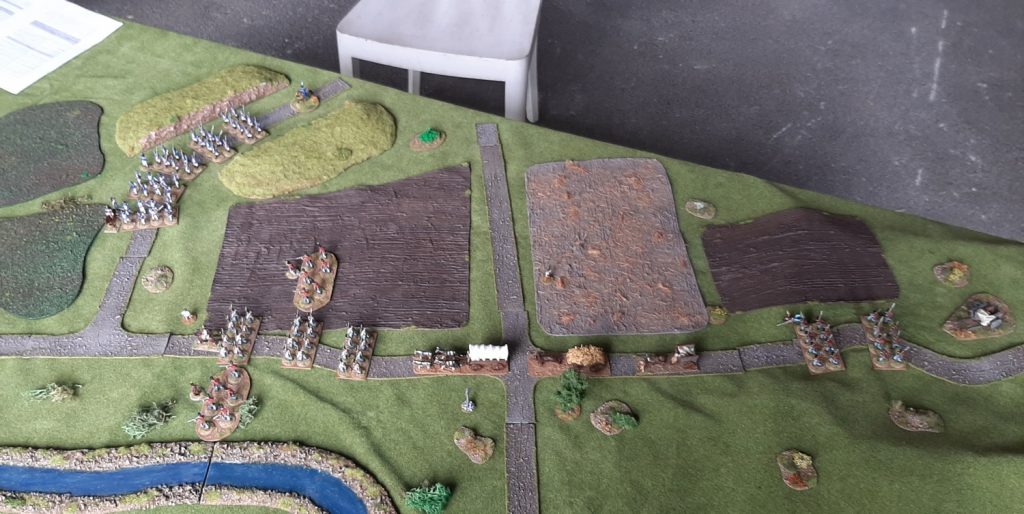 Way in the back of the wagon train the line Grenzers suffer a little mishap – their leader trips and slips into a ditch, meaning he’d have to use his full next activation to get up again. Problem is that the unlucky chap wouldn’t get any activation for a looooooong time to come.

The French infantry line advances and block the road. 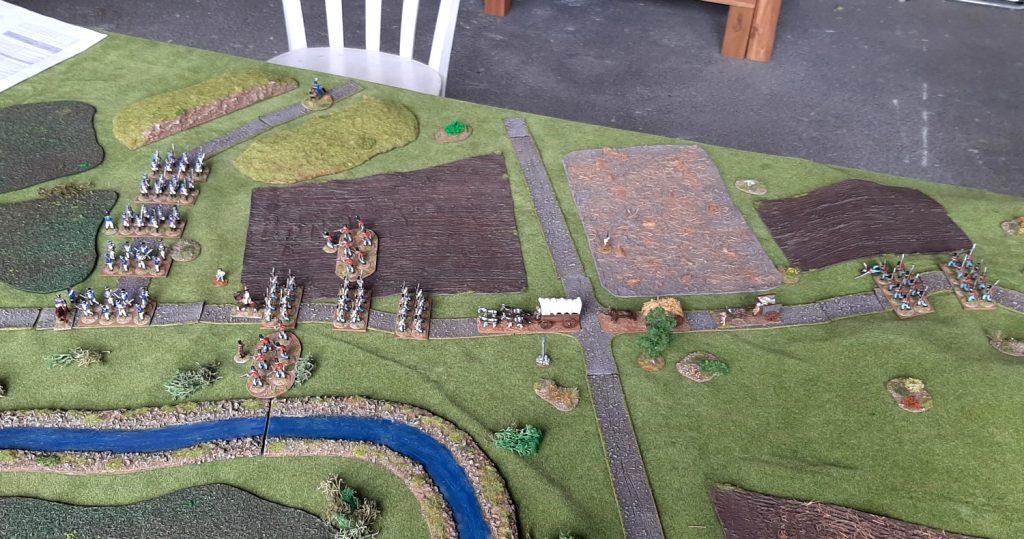 Unfortunately they’re a bit slower than I hoped, so the Austrians manage to line up and – supported by the Grenzer skirmishers –  fire two hefty salvos into my line troops’ flank before I get them to svivel around and form into line.

Fearing for my line, I have the squadron of Chasseurs à Cheval to charge the Austrian Grenzer skirmishers in the flank. The bamboozled belligerents from the Balkans surrender immediately as my line infantry begin to form line. 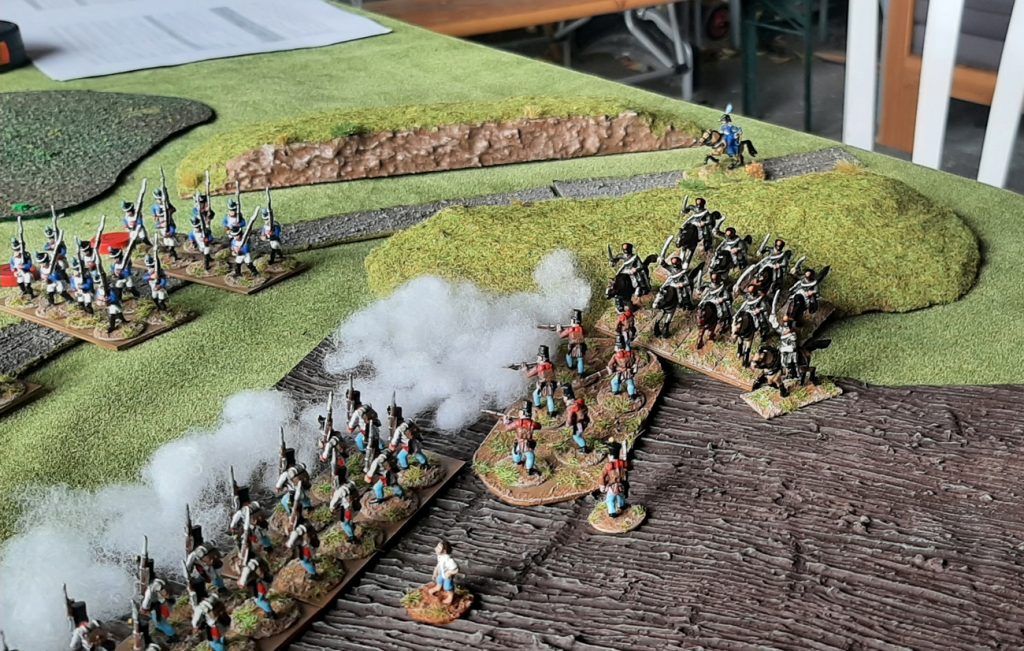 Rather laden with shock, my line returns fire with a Crashing Volley, putting serious pressure on the Austrian line. Not to mention the French cavalry in their flank. The Austrians send the remaining skirmishers to the side of the wagon to open fire at the cavalry.

The fire takes its toll on the light cavalrymen, but still they charge the Austrian line at full gallop. Major Eynhuf just had them dress the ranks and open fire at the French infantry again. They know that the French may be numerous, but they’re close to breaking apart, so the Austrians decide to stand and fight. Likewise, the men even throw back the cavalry charge. 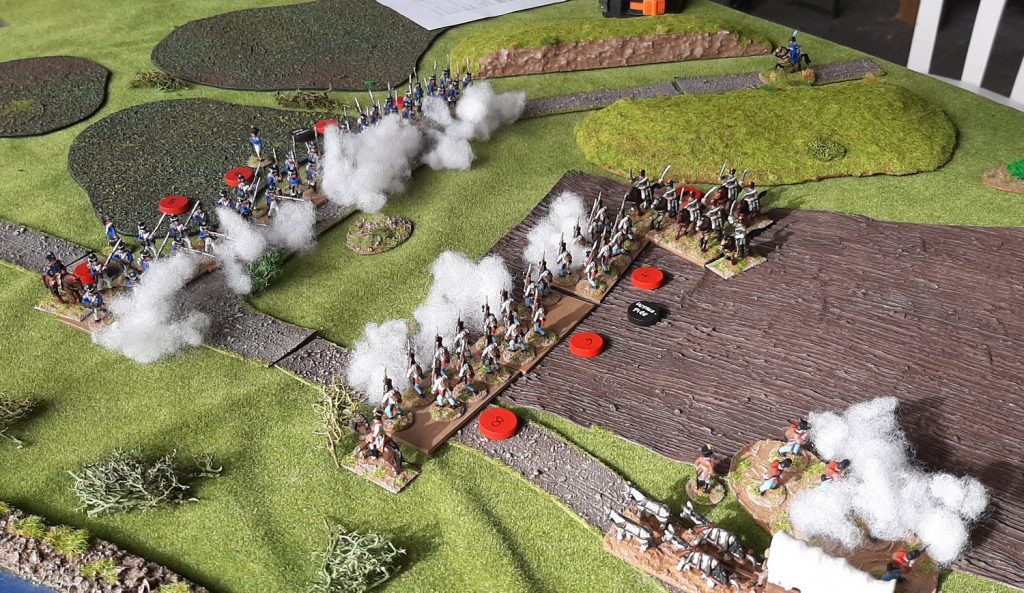 The two lines firing at each other at short range (and very much uncontrolled) cause few casualties, but lots of shock. The French, barely keeping the line together, seem to get the upper hand due to their numbers advantage. The line Grenzers in the back just don’t get going. Eventually the men themselves decide to move forward to support their comrades, as their officer’s still lying in the ditch, cursing and complaining about his hurt foot.

Then even my French skirmishers decide to show up on the hill and open fire at the Austrian line as well.

Eventually the line Grenzers leader manages to crawl back up, only to realize that his men already avanced on their own initiative (but not very far). 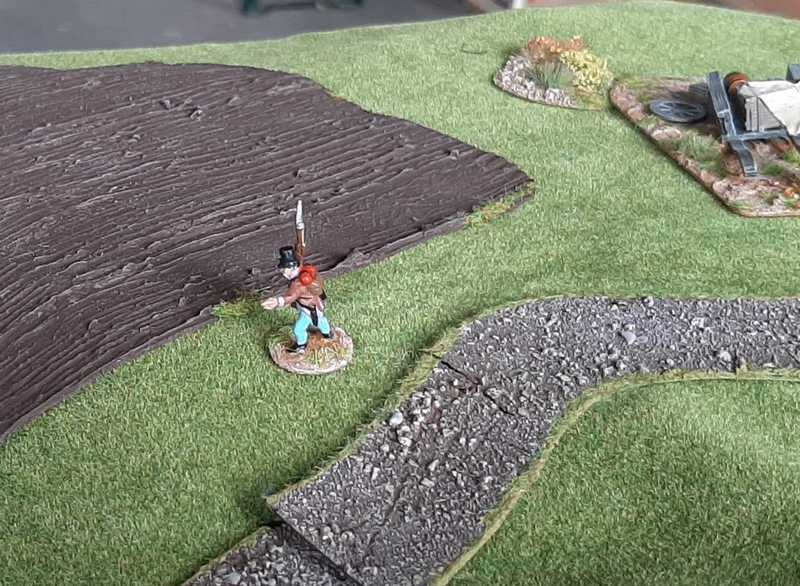 That went well again! Cpt.Shandy was courteous in that he played the escorting troops as they would and didn’t form up for battle until the French actually showed up. Those first salvos against my flanks really did some shock damage, almost making the line break before it was set up. Once it was though, things went rather nicely. The light cavalry in the flank was very scary indeed, but were fought off pretty effectively on their second charge, wounding their leader and thus slowing them down considerably.

The fact that the line Grenzers rear guard never really got going really hampered the Austrian cause. From bitter experience I know that having fewer line units at your disposal than the opponent is very disconcerting. Still, the Austrian line did well for the situation given, and more than once put several of my groups into danger of breaking off from the line. Overall though, a line of 5 groups, blocking pretty much the whole area is just scary and very hard to deal with.

Overall the game was short and decisive, as Ambushes tend to be. But fun was had and the narrative moved on very nicely.

The powder dust settles and quickly Capt.Cruchot is found. He’s freed from his shackles and Capt.Benés physician takes a look at the French officer’s wounds. Nothing serious, but Cruchot took a scar in the duel, which reduces his look from “handsome devil” to “good looking chap”. A low price to pay for his freedom. While being in captivity Capt.Crushot picked up some whisperings about an Austrian spy in the French camp. Immediately upon returning, he has the man put in chains and carted off to battalion command for further processing, which gains Cruchot some honour. 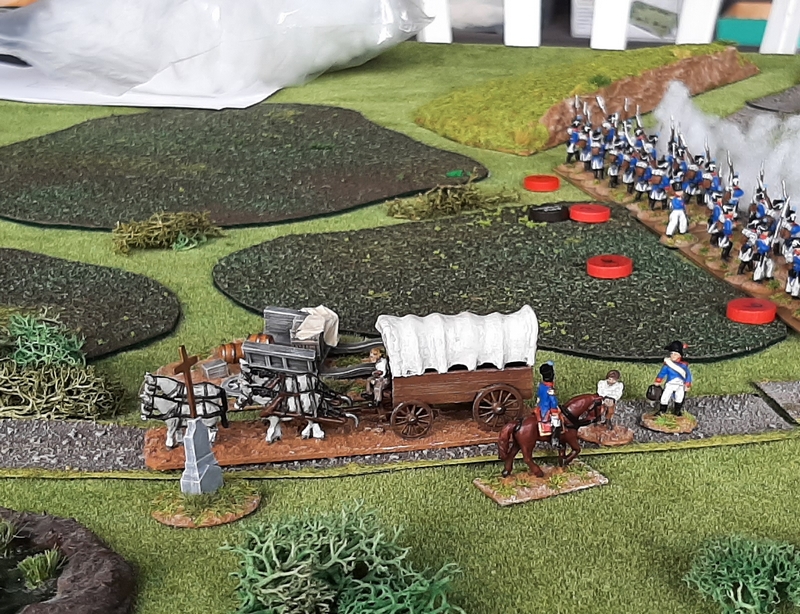 I too rolled for honour gained during the game for winning and for delivering a crashing volley to the enemy.

Back at camp, Capt.Benés is confronted with news – Voltigeurs commander Florin Quellet and one of the officers of the chasseurs à cheval got into a a fight over alleged cowardice of the voltigeurs. They never showed up to this battle, but with good reason: Last time Benés ordered them to help the doctor taking care of the wounded, which delayed the voltigeurs. Hotter heads prevail, and the only option for Quellet to keep face is to demand a duel with the high horseman. Technically frowned upon, but very much condoned in practice, the duel takes place. Other than Benés, Quellet is a skilled fencer and wins, resulting in a Florin Quellet gaining a leader level and the nickname Le Frelon (the hornet).

The next game with feature the next advanture of Capt.Cruchot again, with me playing the Austrian side. Let’s see what happens next!

What I learned: Mike of Mike & the Mechanics is Mike Rutherford of Genesis. I never knew that to be honest.

What's new: Google is turning off Stadia. This is not the time for smugness, even though the name sounded like a horrible sweetener product.

Had a video call with one of these "identity confirmation" places. The guy asked if I was okay with this being taped, I asked "what if I'm not?" - "that is an option, but then I would have to hang up." - "oh." - "yes, so you have that option, but actually you don't".

Hey, here's a fun game to play! Block all the people who ask for "wrong answers only". It's cheap, desperate and lacks grace. Just had to block one of them. The guy calls himself a TWITTER COACH. Unironically. Maybe we should block anything calling itself a 'coach' as well.