Right before everybody leaves for summer holidays we managed to squeeze in Campaign Game #4 in our Star of Bravery Campaign. This time the Austrians are on a run to cross Laber river and destroy a bridge. Capt. Cruchot’s company is sent to prevent them from doing so. 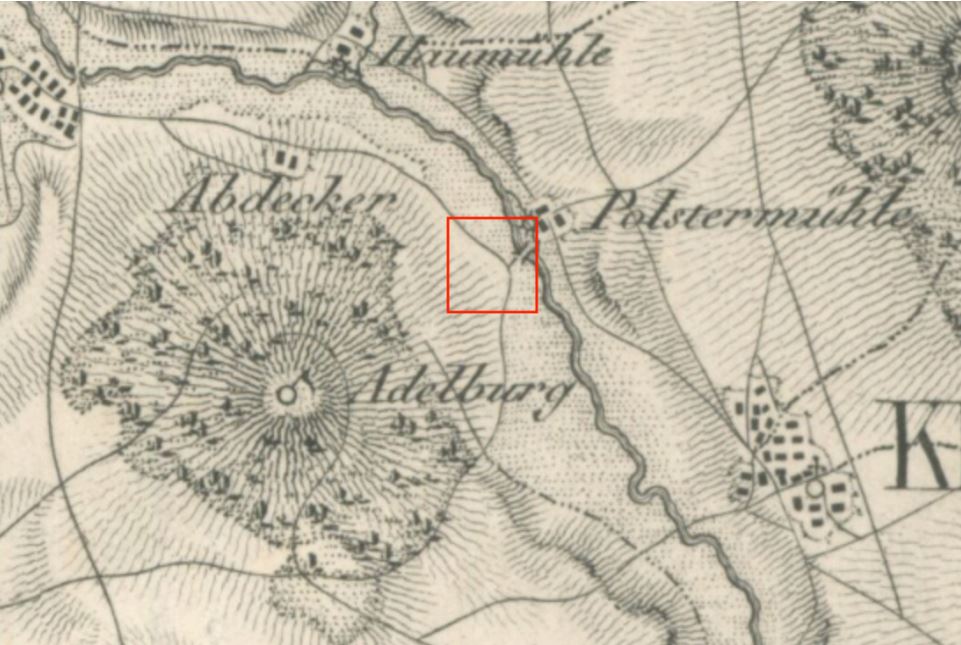 The French division our campaign’s heroes are part of are sent to secure a bridge to cut off the Austrian retreat across Laber river.

The French player’s (Cpt.Shandy) goal is to prevent the Austrians from doing so by reducing their force morale to 0.

Both players got one deployment point, equally far away from the bridge, a hill and a thick forest between them. We both start by deploying a unit of skirmishers each: Cpt.Shandy deploys a unit of light infantry skirmishers, I deploy my group of Viennese volunteer Jägers. 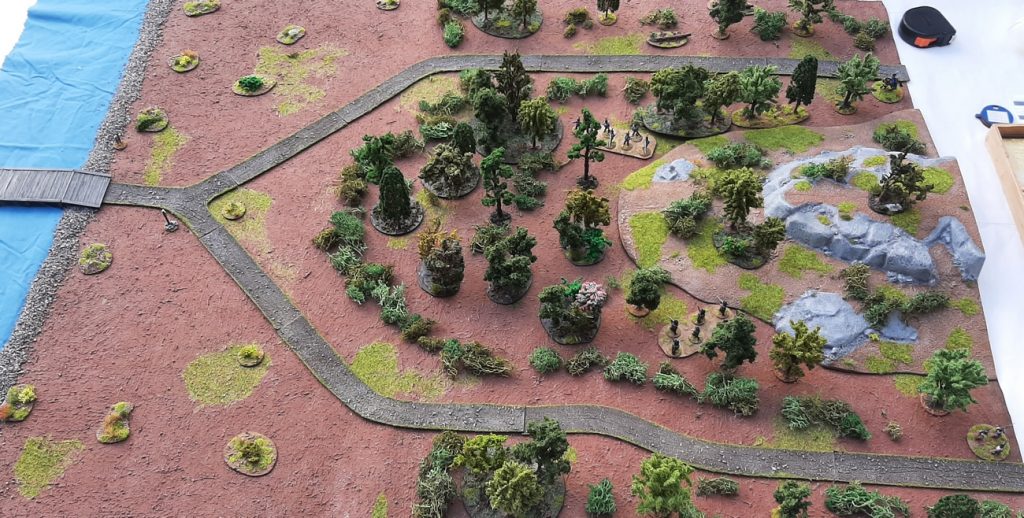 They’re quickly followed up by a group of Stipsicz hussars who scout the road. 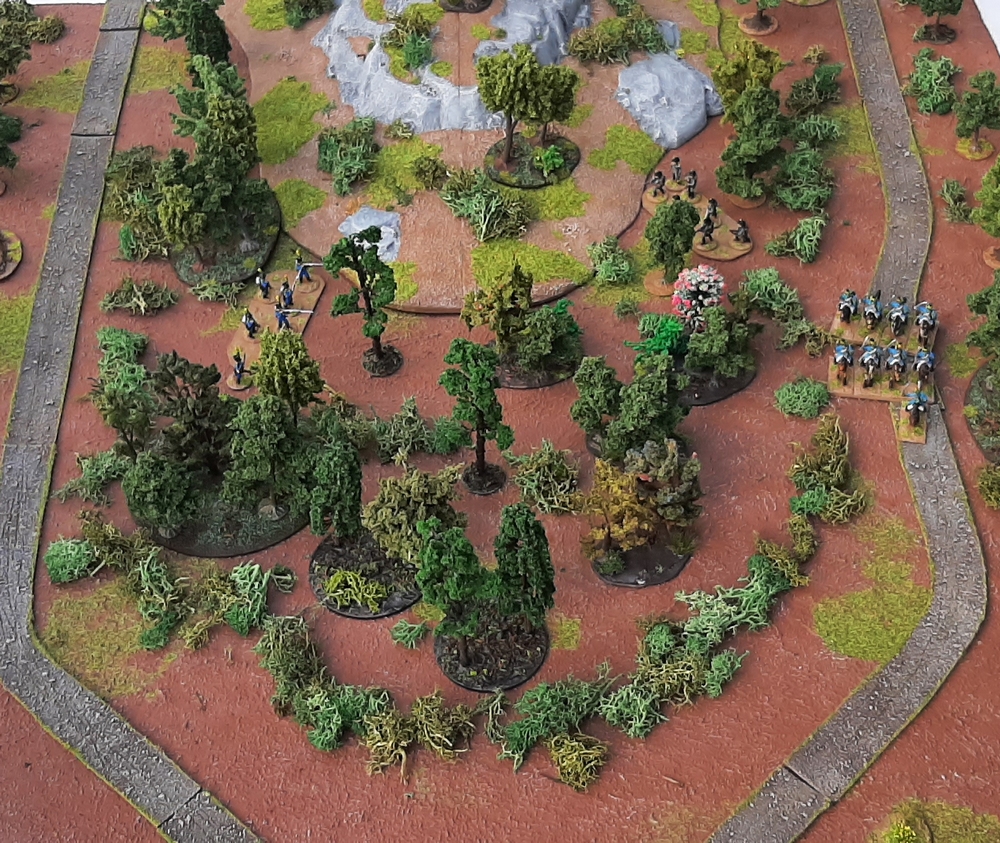 Simultaneously, Capt.Cruchot’s column move down the road, flanked by skirmishers and a squadron of Chasseurs à Cheval. They also seem to be a bit lighter in their step than the Austrians. 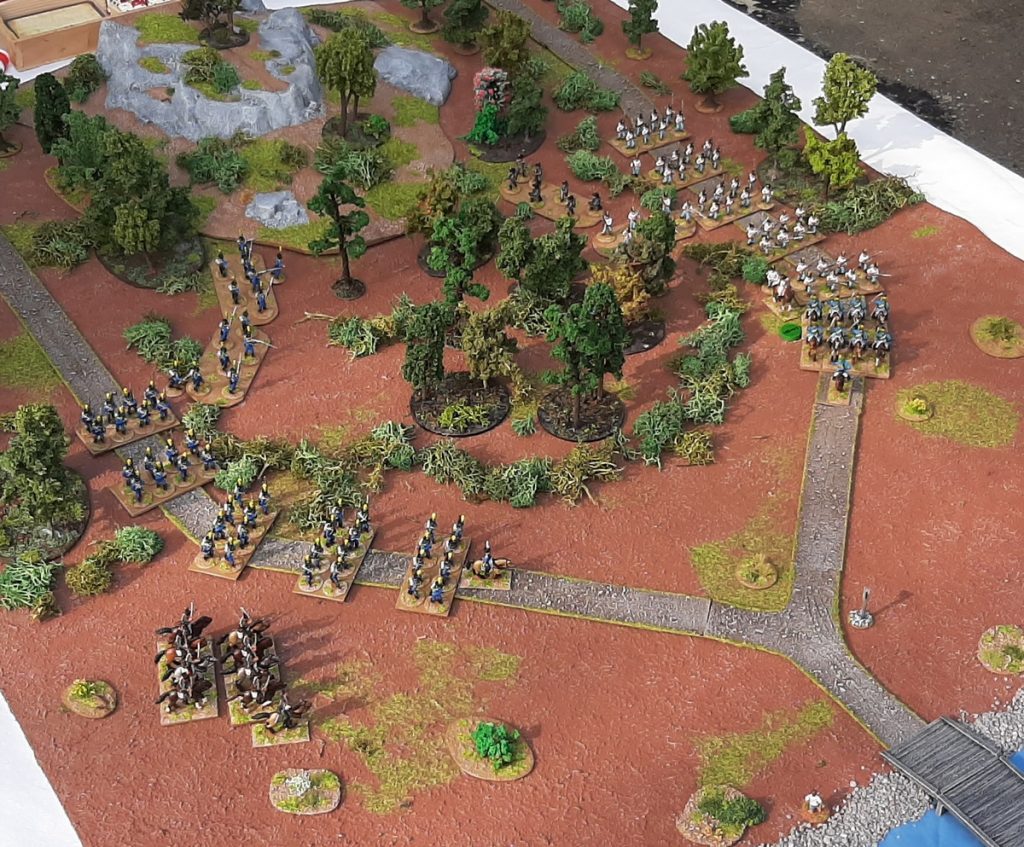 The cocky hussars rush towards the French column to thwart their advance and buy the infantry some time to get across the bridge. 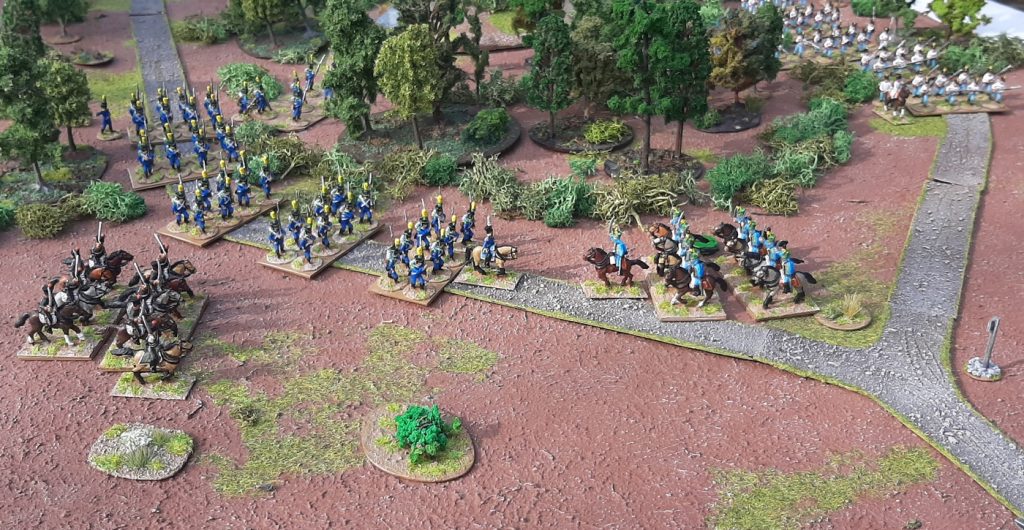 …however, the Chasseurs are keen on proving themselves against the (allegedly) best light cavalry in the world. 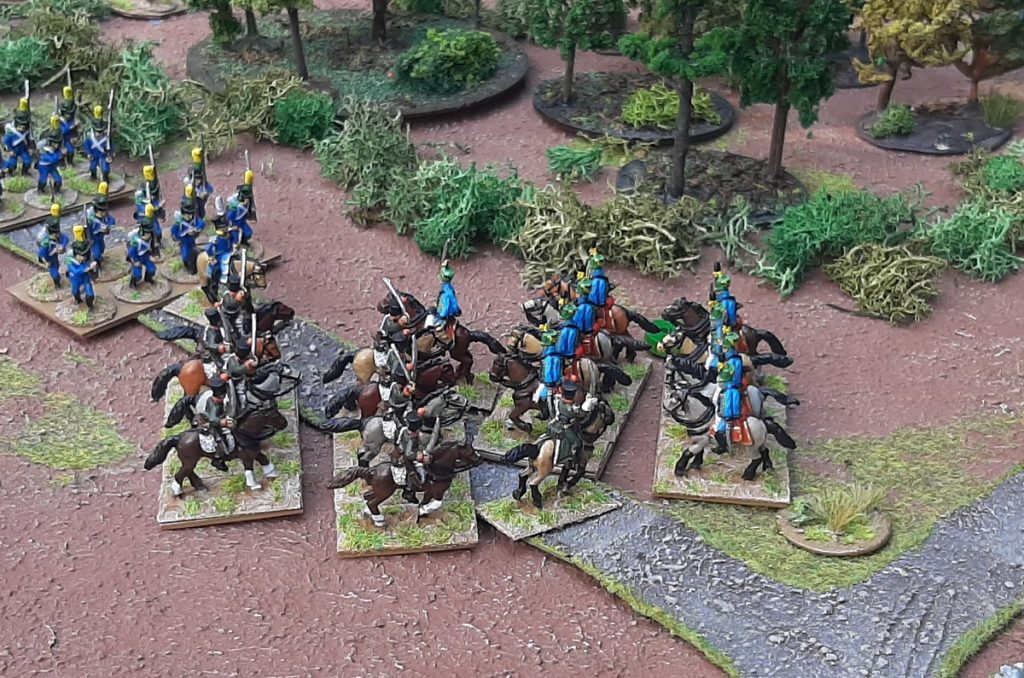 They charge the hussars and drive them off! 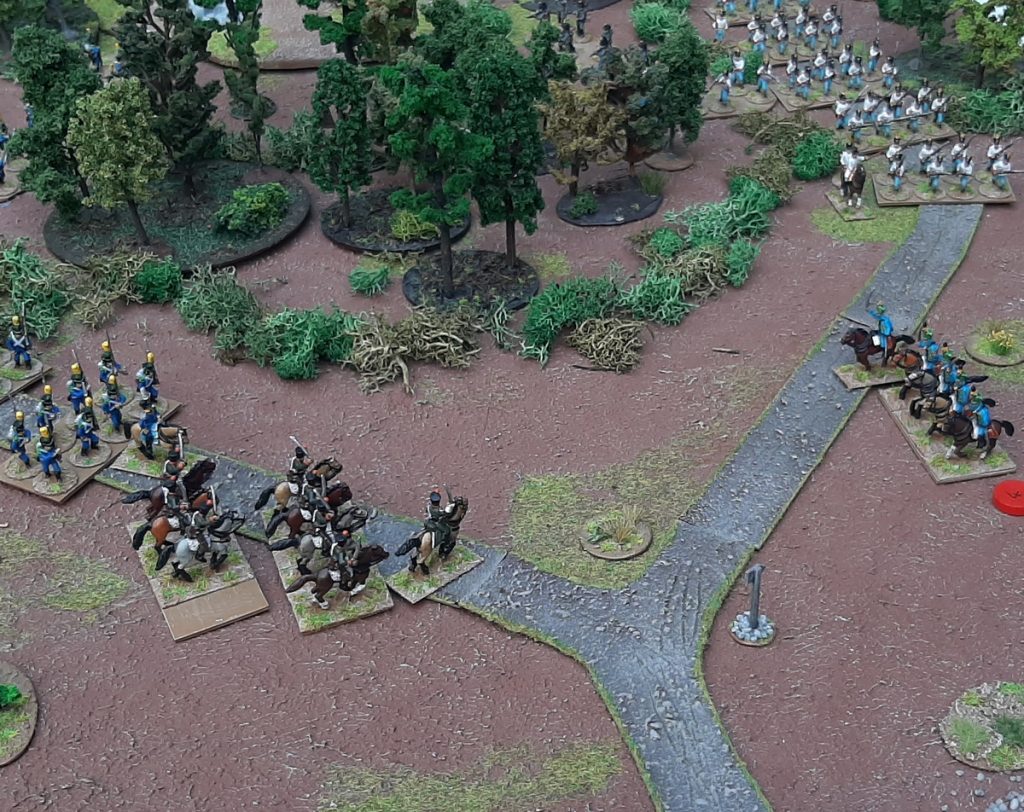 Highly inconvenient for my plans. With my cavalry neutralized and pulling back for the forseeable future, I drive the infantry column on. Meanwhile, Cpt.Shandy deploys three groups of the column in line:

The French infantry make ready and ….charge? Yup, without even thinking of firing they lower bayonets and charge my infantry. Two groups are thrown into disarray and detach from the column. They fight stalwartly, knocking out Capt.Cruchot, while Major Eynhuf takes a wound. The other three infantry groups advance to the bridge.

Here’s an overview after this first bloody mêlée at the forking road: 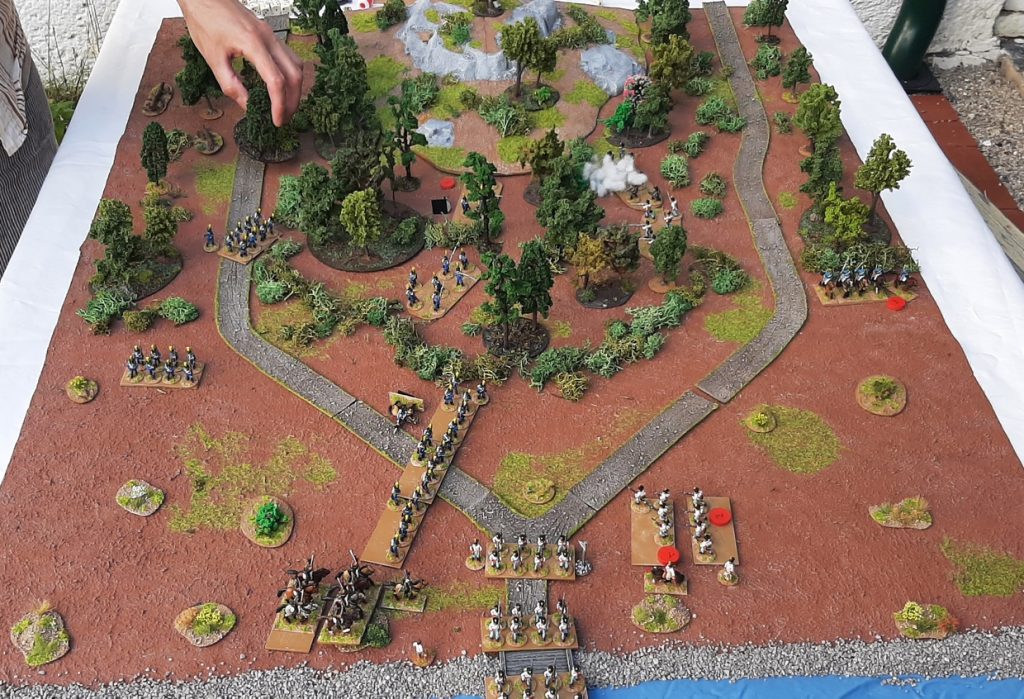 However, the French light cavalry is back in business and charge the Austrians who are desperately heading for the other side of the river. 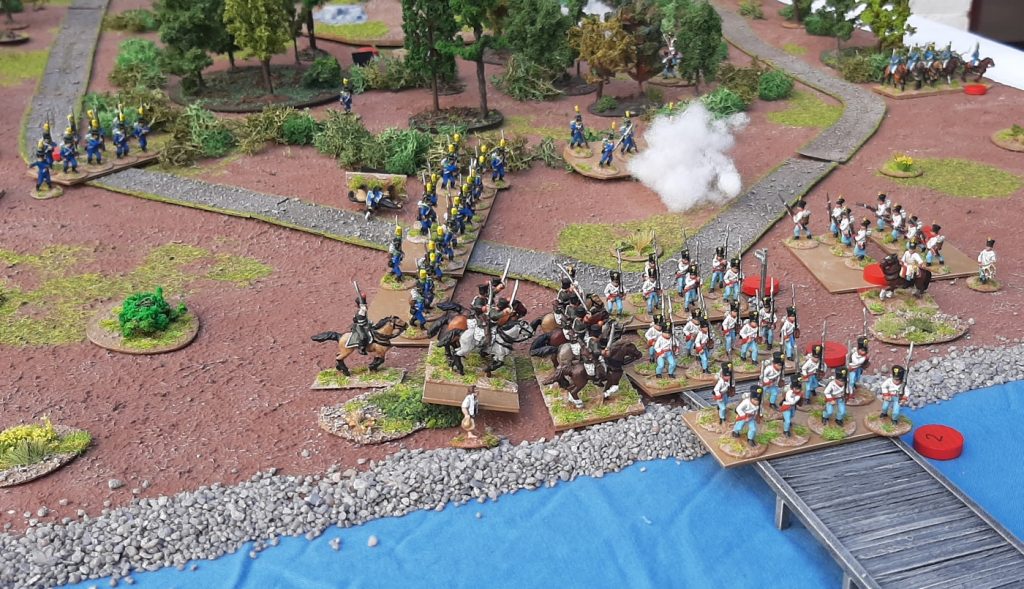 The cavalry is beaten back, but yet again the advance is hindered and another two Austrian group break away, leaving just one group on their way across the bridge. The French line charges again against the Austrians. Once more the Austrians stand for a prolonged fisticuffs, both sides suffer casualties, but the French advantage in numbers, even attacking without their leader who’s still K.O.’d in the back, proves too great and the Austrians are driven back again. 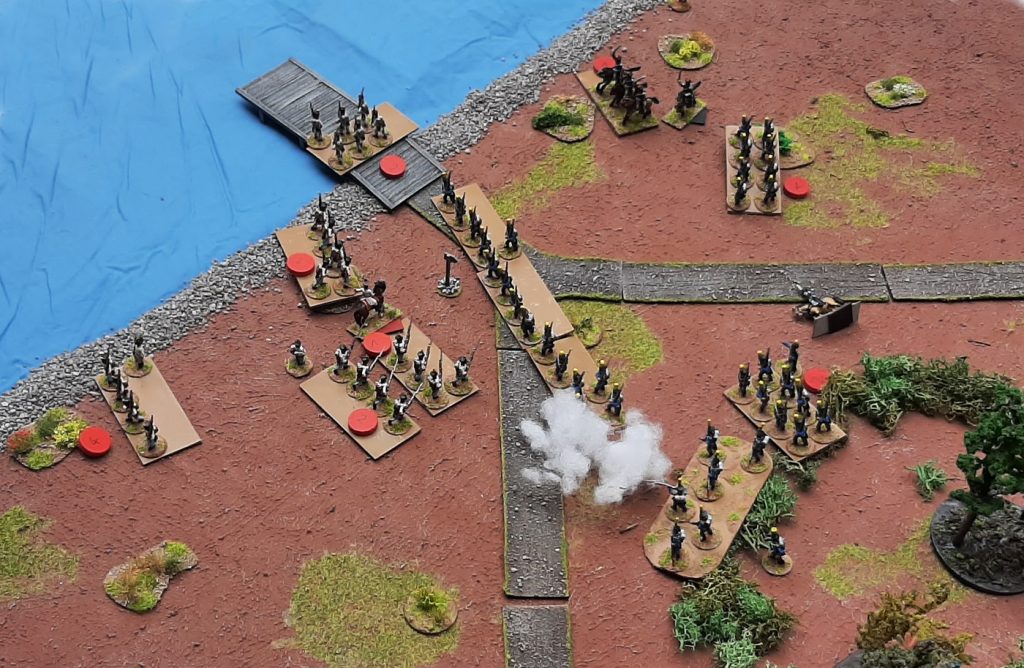 Major Eynhuff scrapes together a firing line from the men left around him and they open uncontrolled fire, but it’s no match for the French line who return fire at close range. 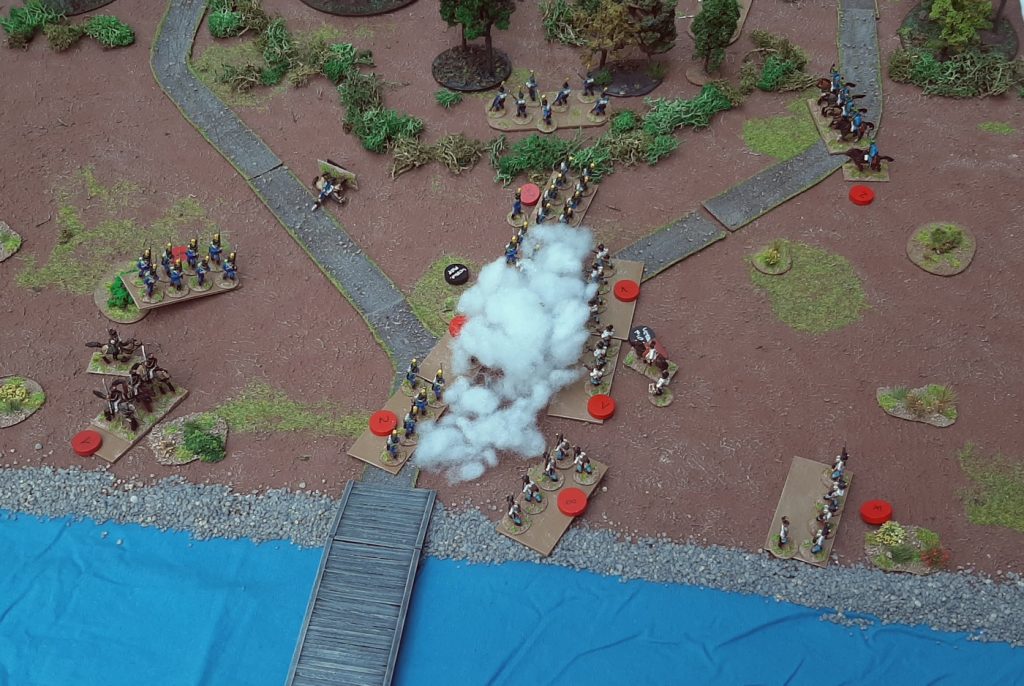 Eventually [leader2] brings up another fresh group, whips the line into shape, and they charge by the textbook. Pas de charge. The remaining Austrian infantry collapse and retire.

In the end the Austrian force morale is reduced to 0, while the French force morale sits at 4. It’s a French Victory!

A tough scenario, a tough fight. Choices made in this scenario are more of a strategic nature than a tactical one, and it sure would have helped if I’d had a plan. The way it played out, our movement (majorly restricted by the terrain) and deployment was pretty symmetrical, but when it came right down to it, the French always were just a bit faster and a bit punchier. Possibly mirroring the way things often turned out historically.

A small respectable success was achieved by the volunteer Viennese hunters, who almost routed Sgt. Merlot’s skirmishers in the forest and were able to capture the hapless Merlot (again).

Either way, a fun game.

Once Capt.Cruchot got up again (remember, he got knocked out in the very first round of combat in the game) and was brought up to speed with the situation he made sure to secure the bridge and send a runner to report back to battalion command.

Cpt.Shandy rolled for honour points gained by Capt.Cruchot and came in at a whopping 9.

Once the bridge was secured follow-up French units came pouring in fast. So much so that a little traffic jam emerged along the way, hindering Cruchot’s company getting to their new (and very special) assignment.

Capt.Cruchot was to choose between three way of handling the situation: Either just wait until things clear up and rest until then, risking potentially being seen ‘sleeping on the job’ by higher ups, and losing honor. The second option being to scout a way around and make their own way, which may lead to additional delays or even getting lost along the way. The third option, and the one which Cruchot went for in the end, is to order his men to help clear up the traffic jam. Turns out some artillery train wagons down and the guys needed some help hauling them off the road for repairs.

Cruchots men are exhausted from hauling wagons around, so they won’t be allowed to run or use Step Out during the next game, which is a very special assignment. Stay tuned to learn more about that next time!