Everybody’s back from various summer holiday trips, gaming is back on! So we’re right back to our campaign.

This assignment, should he choose to accept it (which he does), sends him to a hamlet surrounding a church where he is to forage for drink and food for the troops. 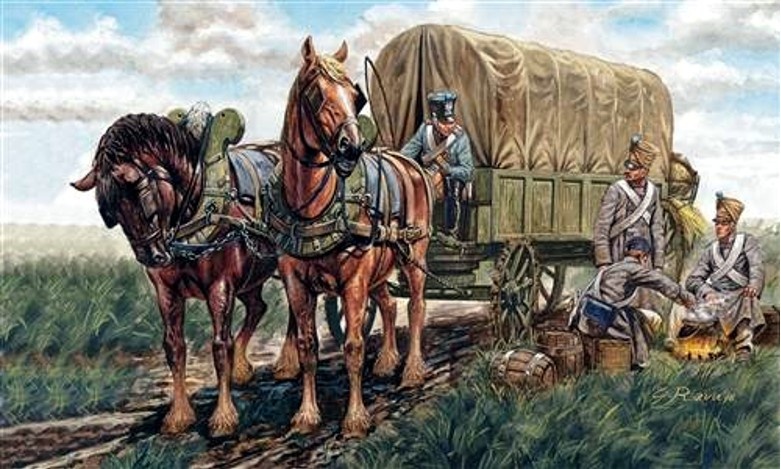 Immediately a wagon and a foraging party is organized and Benés leads his troops towards the hamlet! Unbeknownst to our hero, an old enemy once more gathered his forces to thwart Benés’ plans. Indeed, Major Eynhuff, who barely got away from his clash with Capt. Cruchon at the bridge at Laber river last time, gathered which ever men he could find to gather (in a very Kampfgruppe manner) a force to attack Benés’ force while they are busy gathering supplies.

Each side gets one primary and one secondary deployment point. The French deploy from the supply wagon at the centre, which is being loaded at the moment, and from a deployment point down the road to the left.

The French goal is to get the wagon loaded and drive off the table. On each Tiffin card (turn end), I roll a die, if a total of 30 is reached, the wagon is full and I can start moving it off the table. The Austrians’ goal is to reach the wagon and stop the looting. If any Austrian unit reaches the wagon, the game ends in an Austrian victory.

1x Volunteer Jägers, led by a Status I leader. Notes: They’re armed with rifles and got the Sharp Practice special rule.

The foraging party forages away busily, as two groups of Austrian Grenzers deploys in line, ready to storm the hamlet. 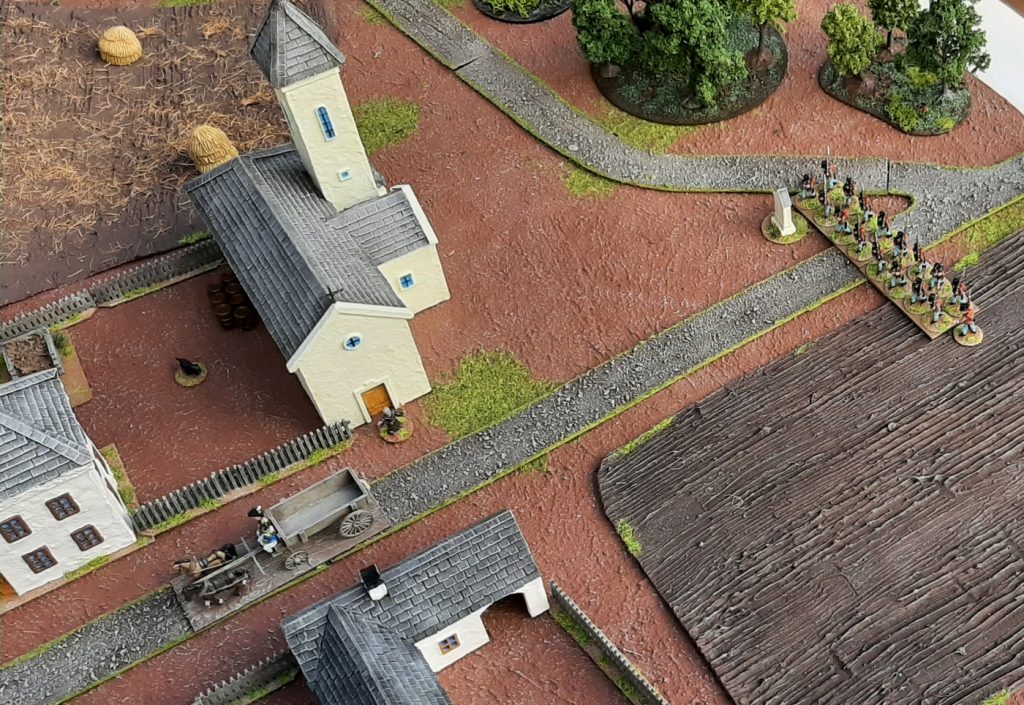 The ever-vigilant Capt.Benés expected the enemy to intervene. He deploys all of his line infantry (and a group of skirmishers for good measure) and brings down the hammer. 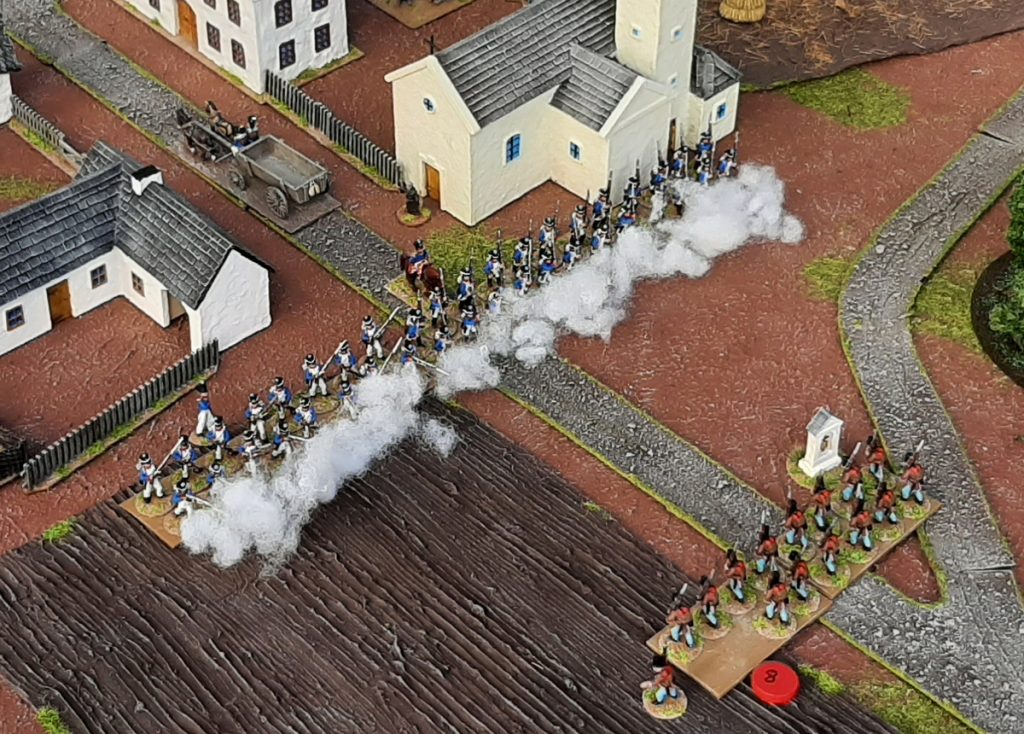 Two swift salvos make short work of the grenzers. Their officer is left wounded in a field, the men flee the battlefield. 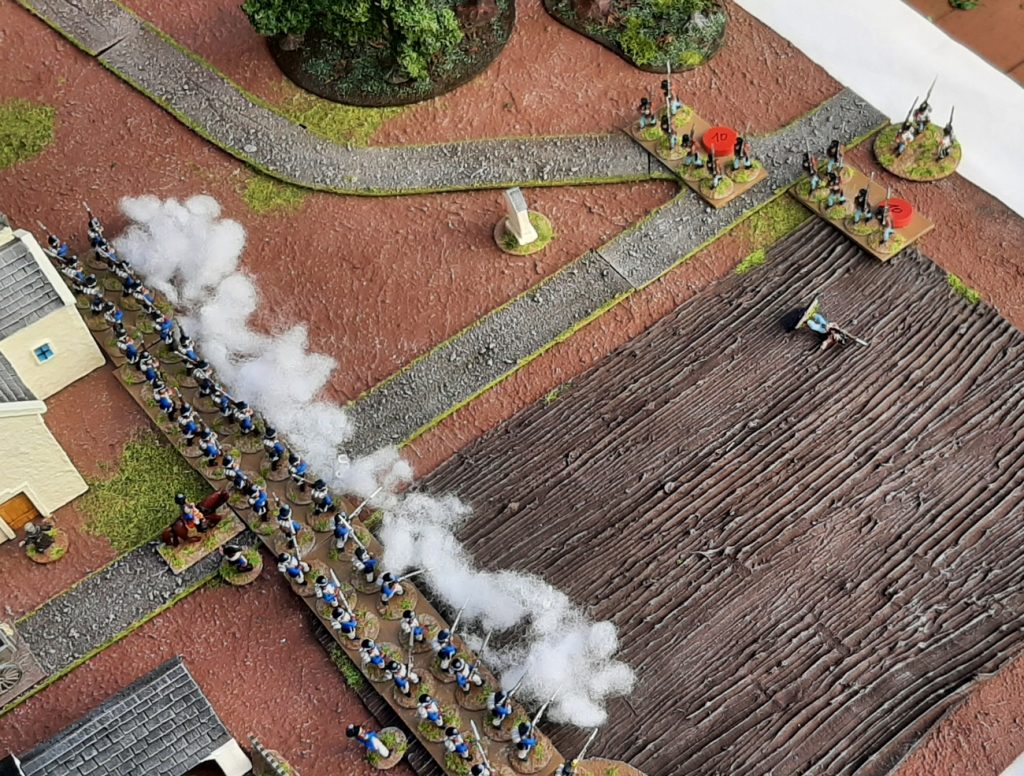 A great victory indeed, once more the enemy is beaten soundly. Wait, what’s that to our left?

Entirely unfazed by the fate of their Grenzer comrades, Austrian troops deploy from the secondary deployment point. Eynhuf sends a group of skirmishers to open fire at my line’s flank. 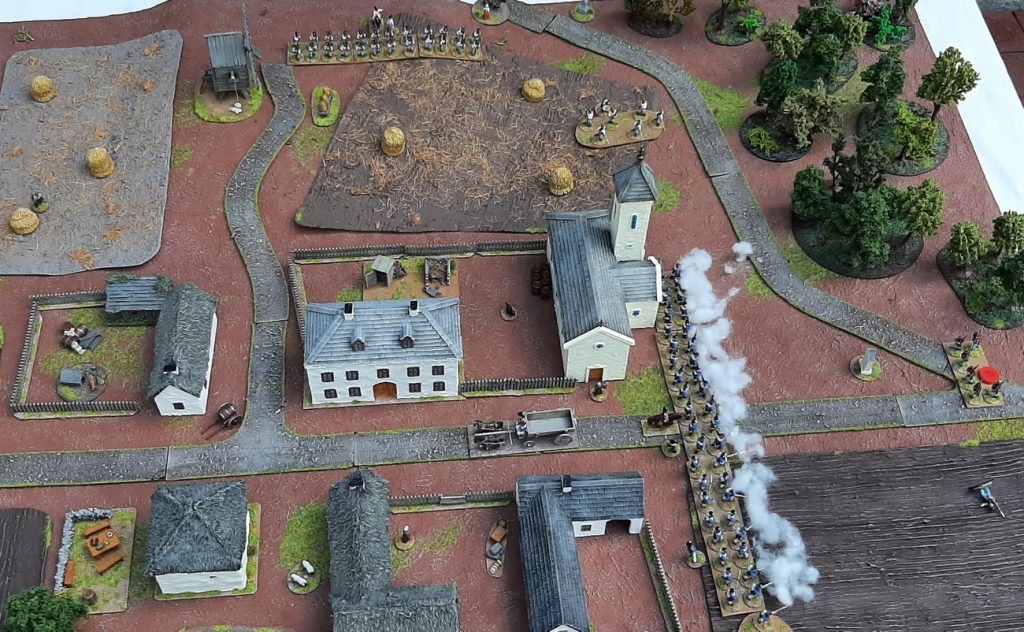 Capt.Benés splits two groups off from the line with the order to “swat away those pesky flies!”. He has to stay with the line and oversee the crushing defeat of the Grenzers. 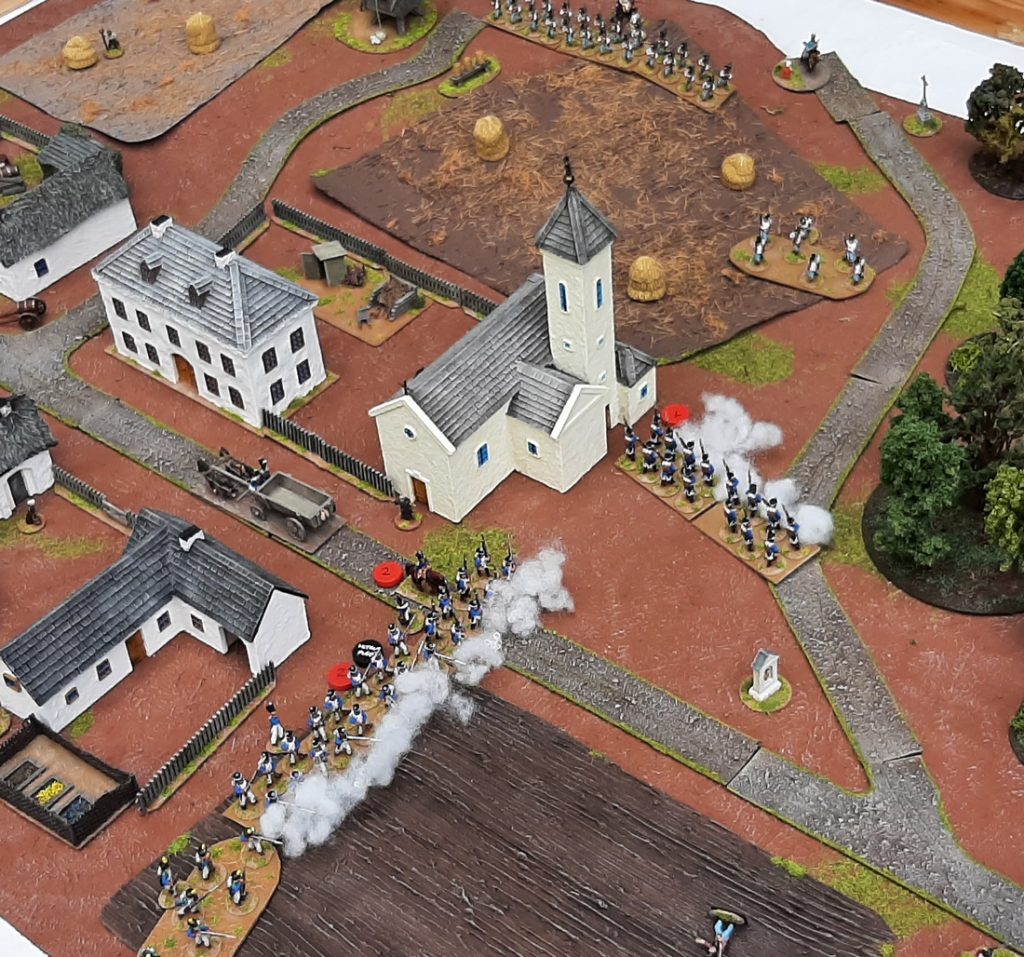 Major Eynhuf seems to have a plan though. He has his skirmishers pull back and instead run for the church yard, right towards the supply wagon. While all my troops are either far away, taking the wounded Grenzer officer prisoner (and plan to head on towards the Austrian deployment point), or are busy firing at an enemy who left  already I got nobody to guard the wagon!

A few moments later, the Austrian skirmishers vault across the second fence and steal my wagon! 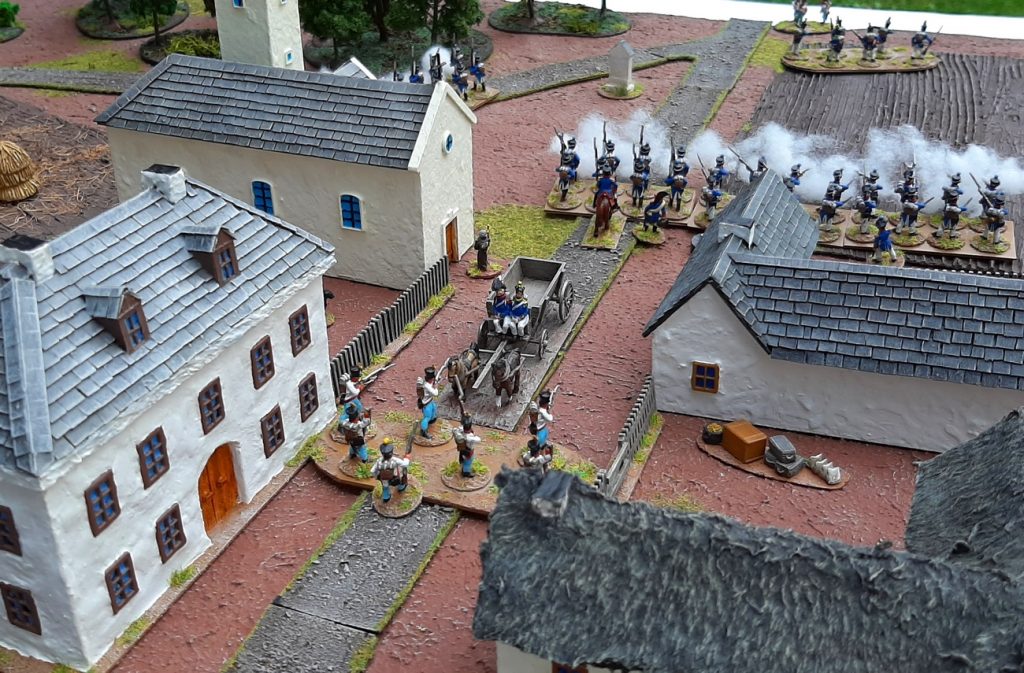 What. The. Heck. Major Eynhuf’s wits are as quick as his sword, it seems. By now he knows Capt.Benés’ unsubtle modus operandi (deploy everything in one big line, beat things in front of it to a pulp), and this time he came prepared. The terrain only allowed for one position for me to deploy a bighuge line, and I was goaded into doing so. I was majorly happy with the results too – routing two enemy line units at turn#2 is a nice head start.

Unfortunately Capt.Benés’ furor gallicus once more made him lose sight of the actual objective.

The only real option for saving the wagon would have been sending my skirmishers from way at the end of my line towards the wagon. And fast.

The problem was that to achieve that, I put all my eggs in one basket. And then I threw the basket the Grenzers. My secret hope was that Sergeant Quillet and his second group of skirmishers would come along to defend the wagon, but once more the activation cards thought otherwise.

Either way, it was a fun game (as long as it lasted), and once more we got a memorable game out of Sharp Practice 2, by setting the world record for the quickest game. 😛

Not a whole lot to do there really. The mission garnered no honour points for Capt.Benés (quel surprise). However, he was given another forage mission right away. This time things would go right!

No honour gained, a permanent -1 to any interactions with locals (due to Benés developing a reputation under the common folk for leading foraging parties into their homes). Let’s see what the random event brings!

As Benés leads his men back to camp with empty hands and empty stomachs, he is greeted by snide comments by Chasseurs-à-Cheval officer Capt. Didier Suffisant. The former aristocrat started a fight with Quellet earlier (and lost the duel spectacularly), but it seems like he still hasn’t learned his lesson.

A battle of more or less witty insults ensues, and soon Capt. Cruchot of the light infantry joins in as well. None of the three is too keen on duelling, so they decide to have a horse race settle the dispute. Of course Suffisant, being of the light cavalry, deems himself the most capable equestrian around. Cruchot however, was the apprentice to a farrier, so he knows his way around horses, and Benés is a skilled horseman himself (evident by his View Halloo attribute).

Capt. Benés wins the race, Capt. Cruchot comes in second, and Capt. Suffisant once more shows that he is mostly talk.

Well, that game went fast, didn’t it. I think it took about 40 minutes, including preliminary work. Three or four phases. To fill the evening we had a lovely game of Commands&Colors Ancients and chatted.

I hope that you enjoyed this write-up of this remarkable game. Cpt.Shandy already played this scenario a few months ago and wrote up a battle report which you can find here. Next time we’ll see Capt.Cruchot in action again. Stay tuned!