Shortly before Christmas I met with Cpt.Shandy for a last hurrah of the year. Since Sharp Practice is basically all we played in 2021 (board games and test games of What a Mecher! aside), it seemed fitting to get Sharp Practice out one more time. It had been a few months since the finale of our campaign, and Shandy had been busy researching Austrian architecture of 1809 as well as painting cavalry forces for Sharp Practice.

That’s why this scenario would be more cavalry-heavy than usual. And there’ll be cuirassiers!

This is mainly to give the rules a little test run, so it’s all kept simple and the forces are almost mirrored. Shandy played this scenario with K. earlier, and with another friend the day after our game. Can’t say he doesn’t test rules or scenarios properly!

This is the situation: Two avant-garde forces are tasked with taking a hill to control the road crossing. Taking the hill is the primary objective. If one side holds it with infantry and reduces the enemy force to Force Morale 4 or less, they win. A force will also win if the enemy is reduced to Force Morale 0. 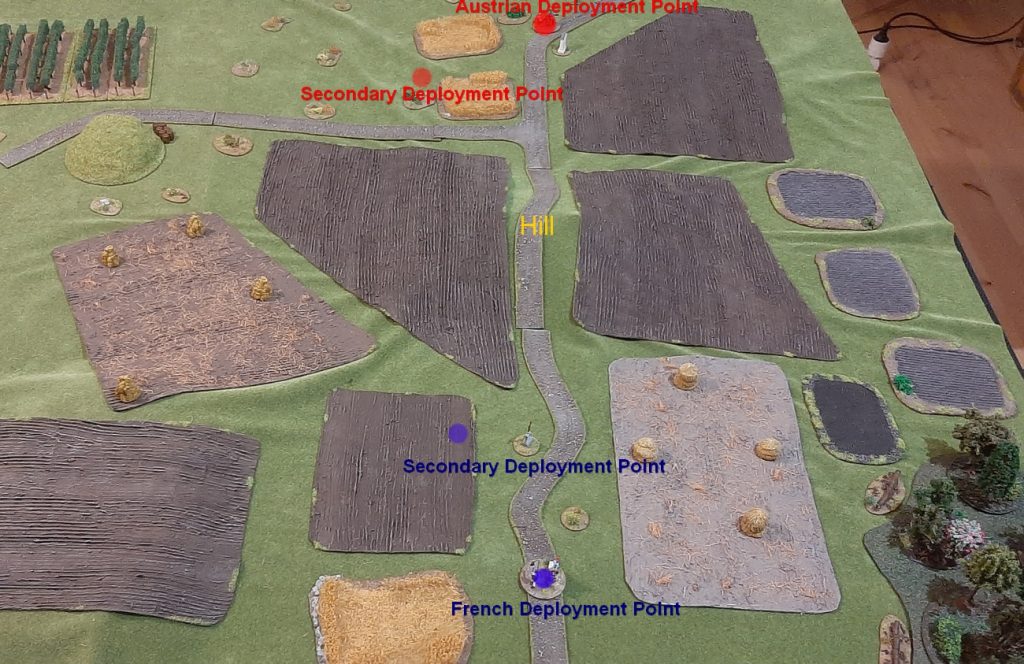 2x Uhlans (Lancers), the force commander is with them

3x Chasseurs à Cheval, the force commander is with them

Quite different to all the ‘national characteristics’ and prejudices, the Austrians (played by Cpt.Shandy) take to the field quite swiftly. Their infantry marches down the road and halfway up the hill, flanked by a group of Hussars to their left. Meanwhile the French (played my yours truly) light infantry is less snappy. 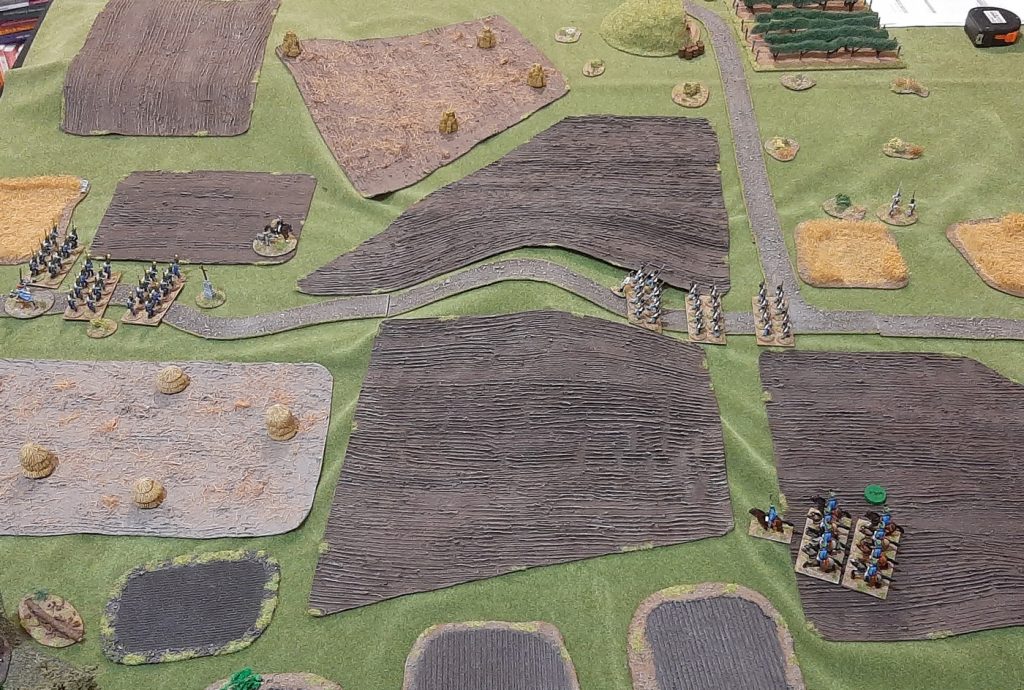 Seems like my French infantry is unwilling to advance towards a hill without knowing what looms behind it. They call in some recon in the shape of a group of Chasseurs à Cheval. This is enough for the Austrian infantry (who sit back behind the ridge as not to pose a target) to form square. Or rather a ‘mass’.

This makes my brave Chasseurs hesitate for a minute. Just enough time for Austrian cuirassiers to pop up!

The heavy cavalry immediately set out to shoo my light cavalry away. 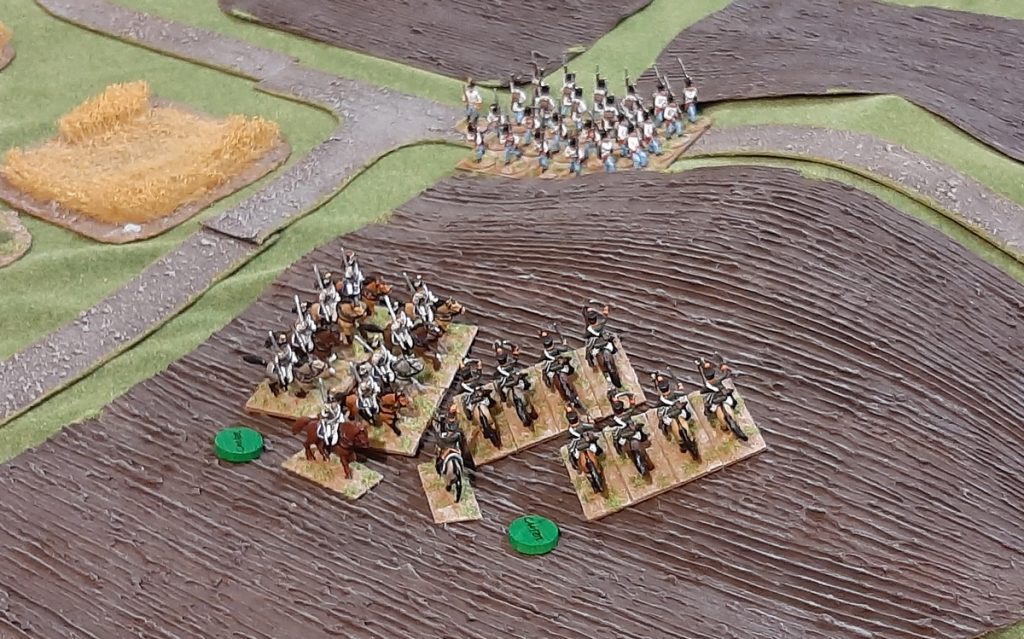 It’s a violent, and one-sided affair, and my beaten light cavalry are in full retreat as the cuirassiers regroup and pat themselves on the back. 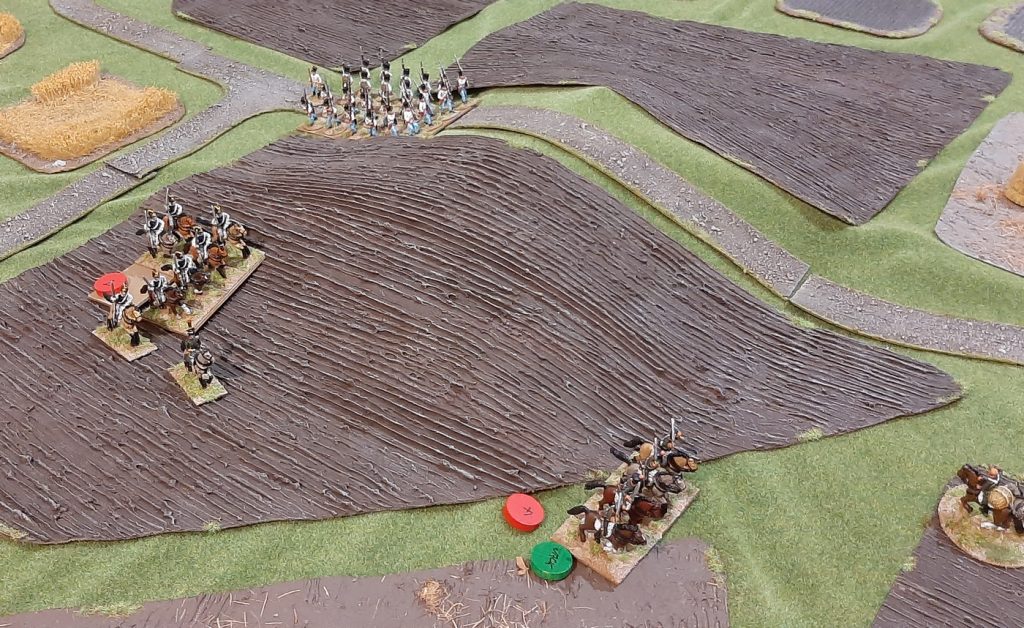 My own cuirassiers are called in to cover the Chasseurs’ retreat. 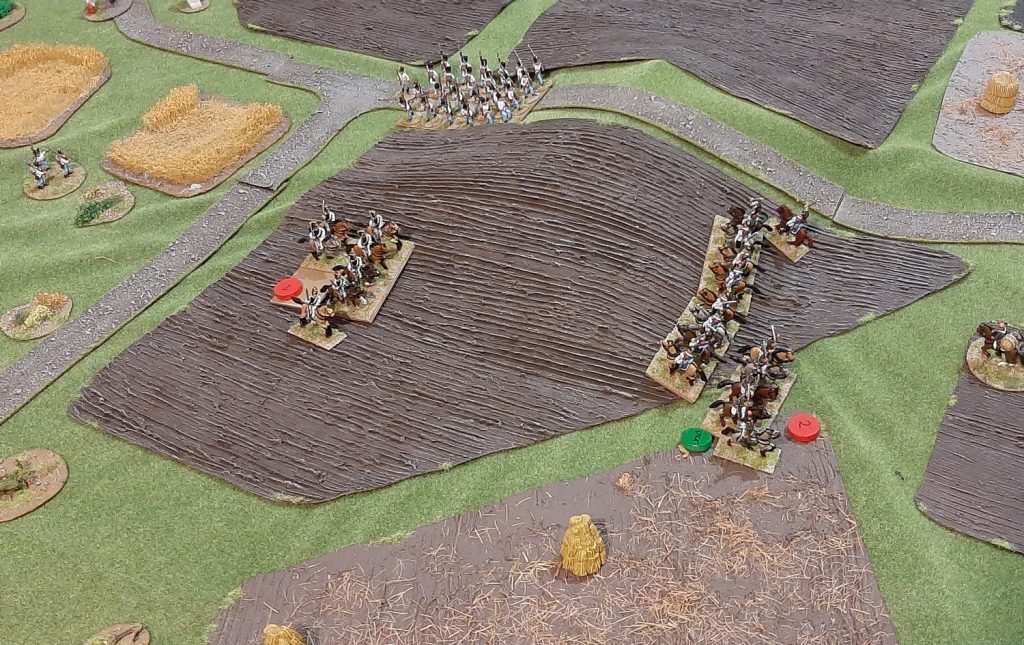 With at least one flank secure, the light infantry get bolder, advance towards the hill (but don’t quite make it up there) and form line. 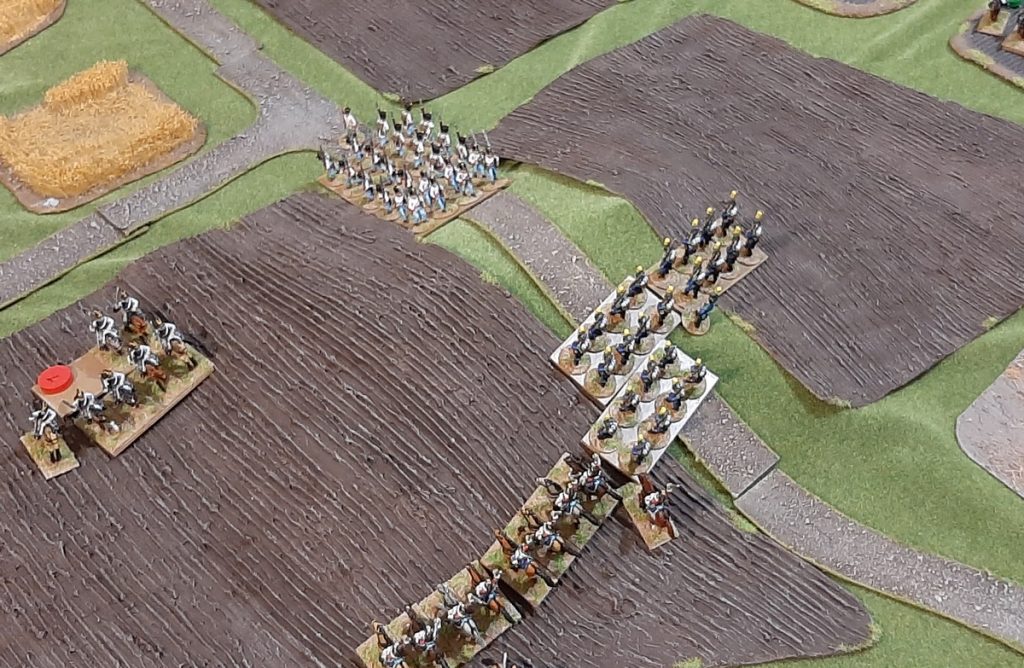 Neither of the infantry units can see each other due to the hill at this point. As our heavy cavalries stare each other down, the Austrian hussars seize the moment and charge my infantry, as they work on forming line along the hill crest. 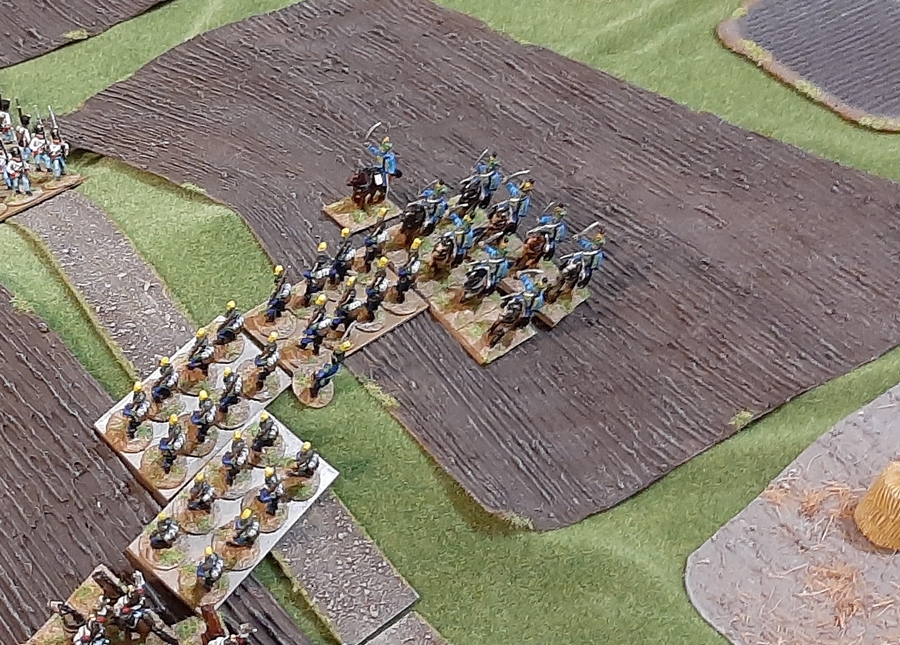 We’ve had light cavalry charge infantry lines before in Sharp Practice, and most of the times it wasn’t that impressive. We even introduced a special fisticuffs bonus for cavalry charging infantry flanks or rears and still infantry usually holds. Well, not this time. The officer is busy at the centre group, and thus can’t help his men in close combat, and the whole line is thrown into diarray, as the triumphant Austrian hussars retire back towards the fields.

Meanwhile, my cuirassiers charge their Austrian counter-parts and beat them back to Vienna. The problem is that my cuirassier officer gets knocked out during the whole kerfuffle. 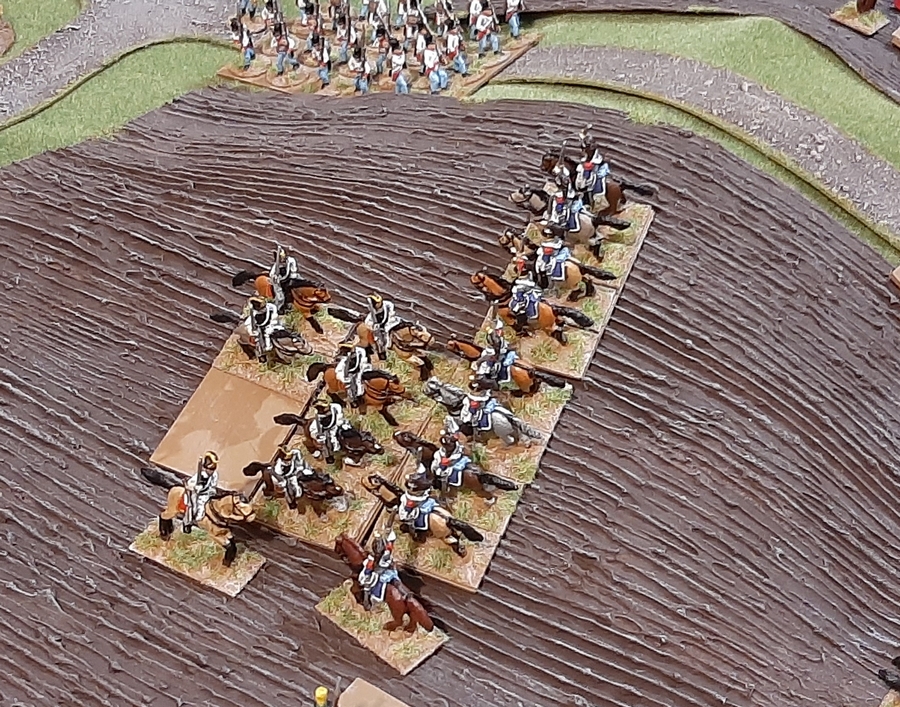 An overview: Austrian infantry still in Mass to deflect any possible cavalry charges, French infantry is in disarray, the French chasseurs a cheval just so rallied to patch a gap between my cuirassiers (who just sent the Austrian cuirassiers packing). The Austrian hussars retire without any serious losses. 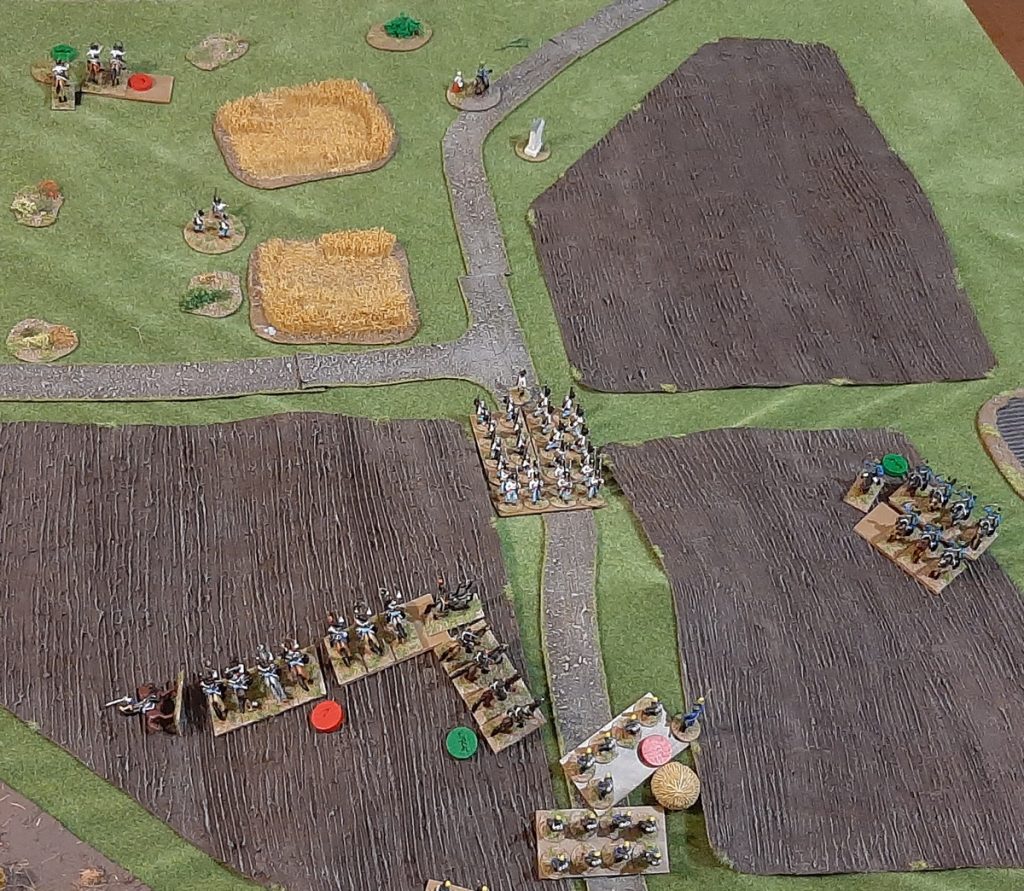 As the French cuirassiers try to get their officer awake again to exploit the small victory a whole lot of Austrian Uhlans show up to thwart that plan. 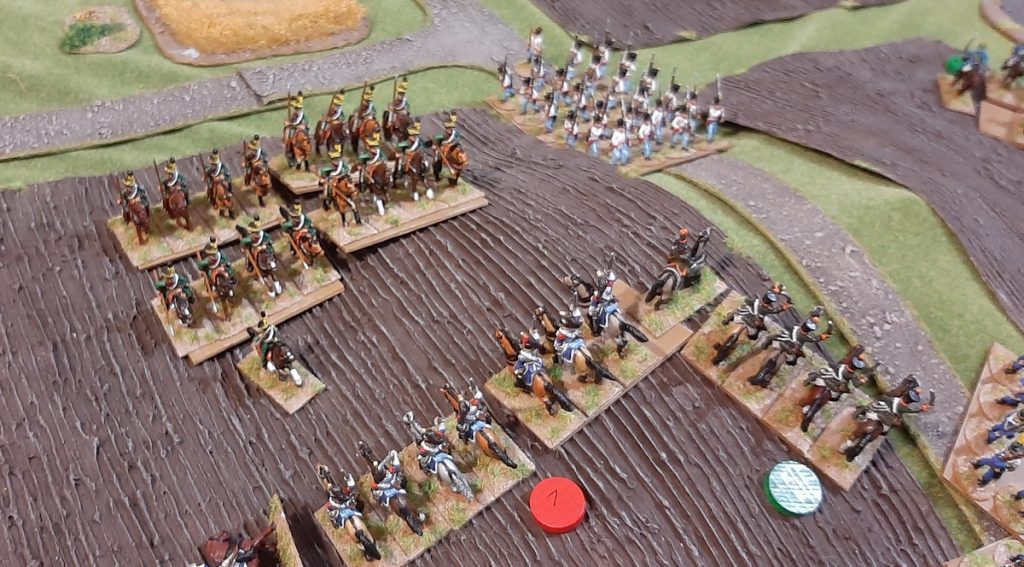 Meanwhile, the hussars go in full hussar mode No.2, being all active, zipping around, being a nuisance. Hussar mode No.1 of course being cursing and going after ladies. So the hussars look for an opening, and soon they find one: The French deployment point is entirely unguarded, and my force morale took more than a dent already. The Austrian hussars drive their little horses on. 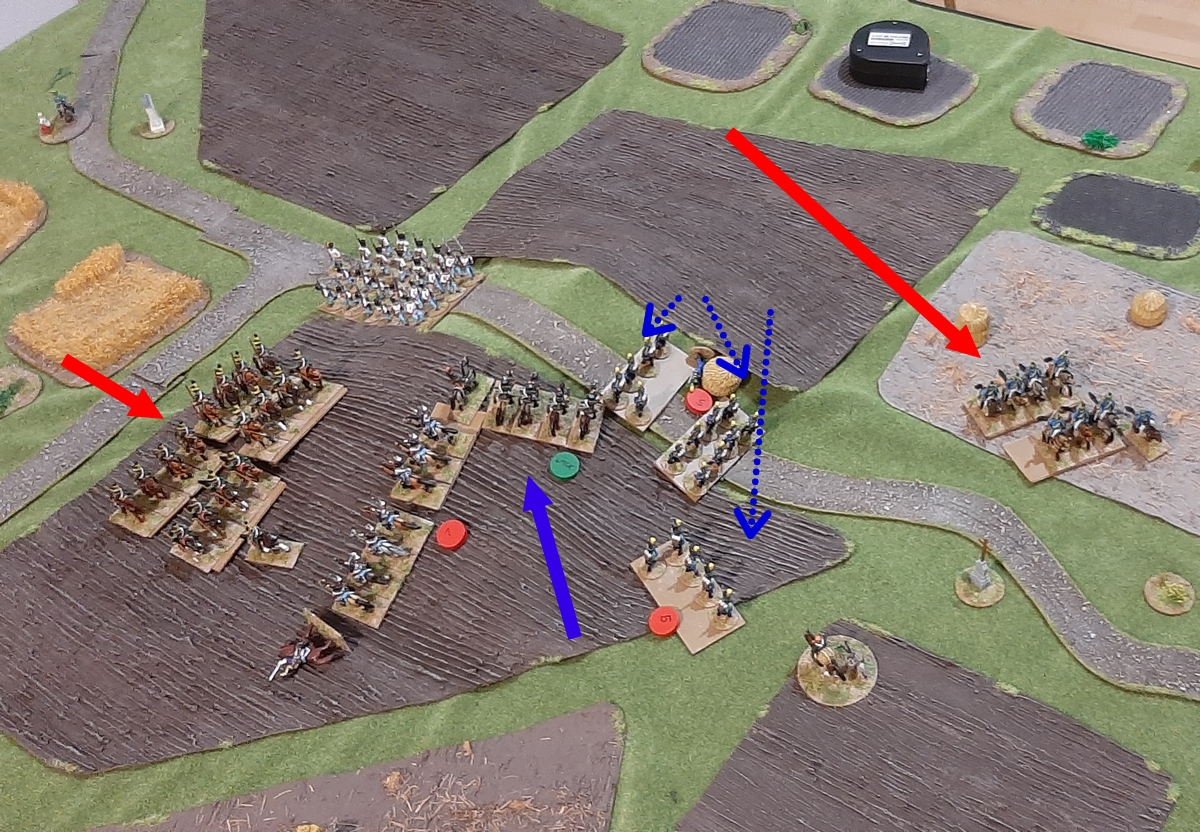 This irritates me to a large degree, but  true to form I see the irritating thing and ponder how I can ape it to be even more irritating. So I send my battered light cavalry around the flank to go for the Austrian deployment point (knowing that they got all their troops deployed already). Also true to form I miss a horrifying detail: That Austrian infantry mass got muskets pointed in all directions.

So they start pelting my light cavalry’s rear. 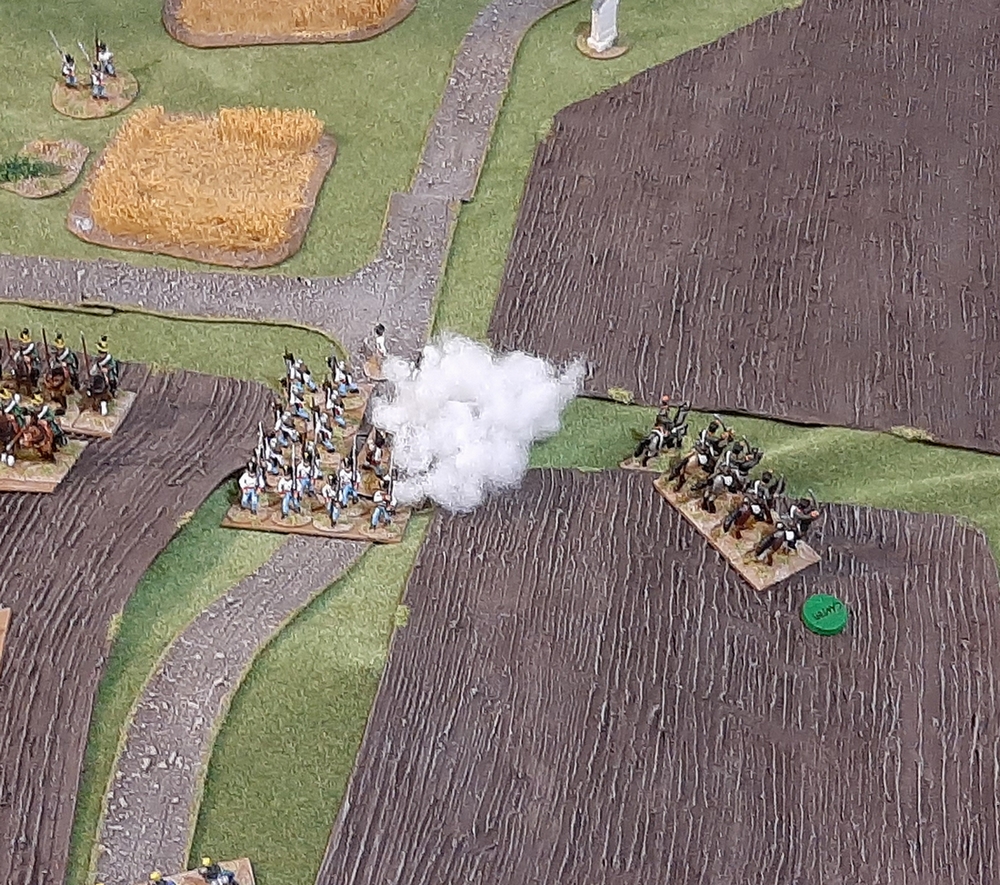 A pelted rear is no fun (unless you’re a bear), and the two remaining chasseurs flee.

Meanwhile the Austrian hussars juuuuuuuuuust don’t manage to capture my deployment point, and by a stroke of luck, the rest of my light cavalry show up to save the day. They deploy into fisticuffs. 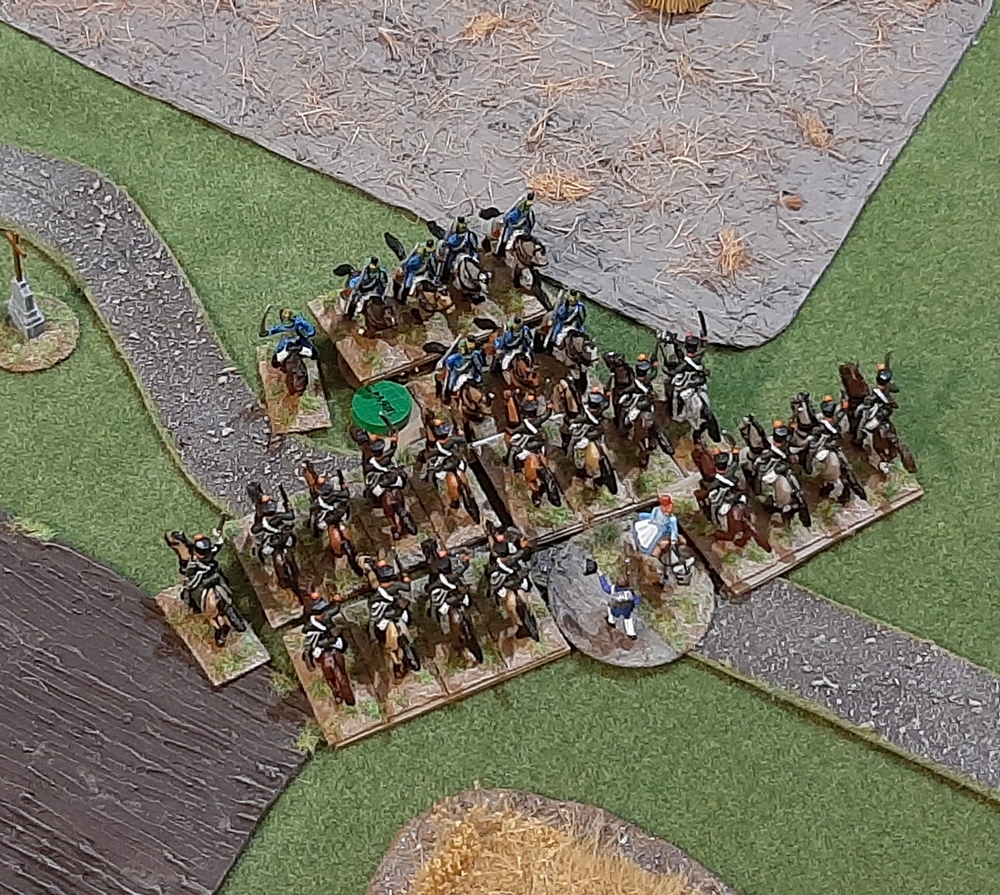 Right, the hussars are taken care of and are basically out of the game. Unfortunately though, my cuirassiers officer won’t get up, and those lancers go in for the attack. 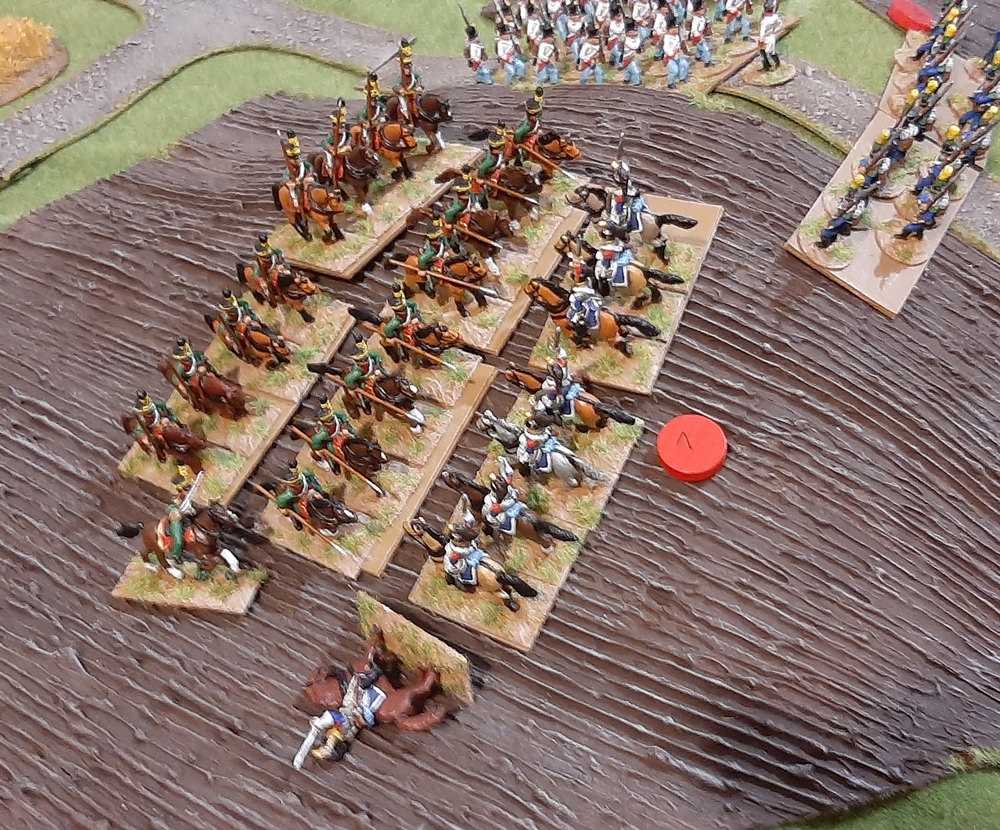 My cuirassiers get battered by the lancers.

Seeing as how things go pretty well (and how my force morale is at 4 at this point), the Austrian infantry form back into column, and make ready to storm the hill top, behind which my own infantry formed into a haphazard line.

They move up, but again the lancers are faster to charge and wreak havoc among my somewhat demoralized light cavalry. 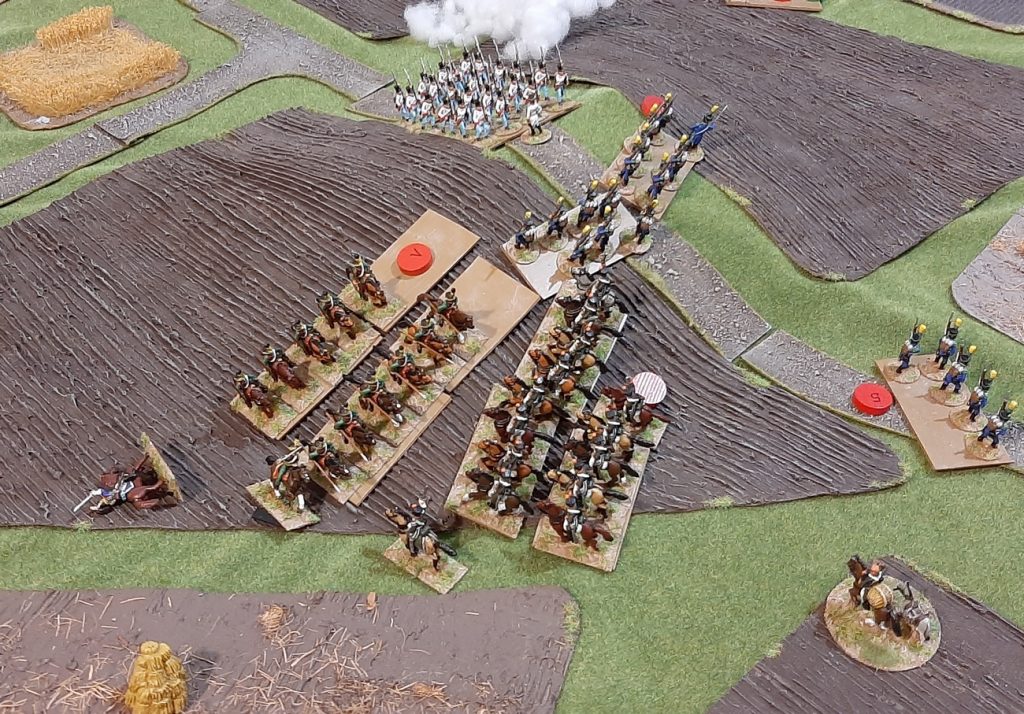 The final force morale is something like 4 on the Austrian side, -2 on the French side. 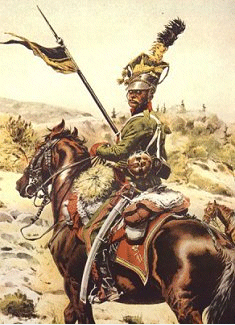 Oh well. The rules amendments we used for making cavalry work a bit more convincingly worked nicely and seem to be well thought out. Apart from some stats adjusting, light cavalry gets the chance to evade if charged when standing or when moving away from the charger. Cpt.Shandy put another rule in place which reduces the impact of shock on cavalry movement, and also added an option for cavalry to move through friendly cavalry if it’s standing. Also, all cavalry units get the In Hand universal special rule.

All these rules are used to prevent cavaly groups from being basically out of the game after the first fisticuffs and to give them an option to ride several attacks within the same game. It’s bad enough how fisticuffs can take out our leader pretty easily, which might turn your cavalry unit into a sitting duck for quite a while (as seen on my cuirassiers after the first successful charge). To counter-act this a little, all cavalry leaders are at least status 2. 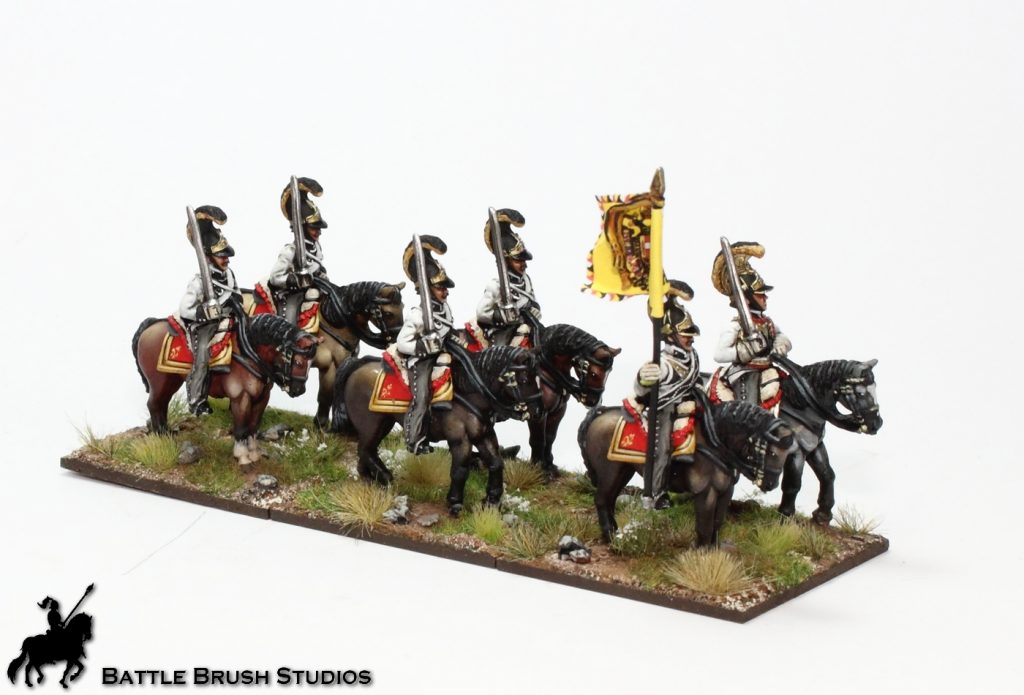 All these rules proved pretty effective in keeping cavalry around for a bit longer. Apart from that, the huge deployment and movement distances of light cavalry make the game quite a bit more dynamic. This leads to the interesting situation of having to decide whether you want to deploy your light cavalry for harassment or keep them in reserve to bacially counter-charge enemies who get too close to your deployment point.

Well, it was a bit of a different experience. Sharp Practice is really good at modelling infantry combat. If you want to play with lots of impact cavalry used in an impact-y way you may want to consider some rules modifications. But it was cool. Sharp Practice is always fun, isn’t it.

So that’s it for the wargaming year of 2021. Just like 2020 already – not that much wargaming really, between all the lockdowns and all of that. Weirdly, I did close to no solo wargaming either this year (very much opposed to last year), because most of the year actually was pretty stressful. At least we got some gaming in though, and those occasions were always very welcome. And for the first time in my life I played and finished a campaign! Not too shabby.

Hope you enjoyed this battle report and that you had glorious holidays! See you soon!