First Sharp Practice game of the year, and once again Cpt.Shandy has outdone himself with the scenario. It’s a tricky one he’s currently playtesting for a mini campaign set in Traisen Valley in 1809.

The historical background of the scenario revolves around a bunch of Styrian Schützen, Landsturm and Landwehr gathering in Traisen Valley in May 1809. The French got wind of that and feared another popular uprising as in Tyrol and elsewhere, so they sent in a force of light cavalry and light infantry to take care of things.

The first serious encounter took place at a glassworks right at Traisen river.

Due to the asymetric nature of the encounter and the fact that this is meant to work within a campaign the Austrians have a few special rules in place. The main one being that they’re allowed to withdraw voluntarily once their or the enemy’s force morale drops to 5. However, they have to get most of their units off their own table edge (West) for this to work.

As usual with one-off test games we rolled for who played which side. Cpt.Shandy got to play the Austrians, while I was to command the French forces in this game.

2x Light infantry skirmishers, led by Lt.Picot and Sgt.Mercier (all Status I) respectively

I send the Chasseurs à cheval down the road to scout for enemy forces. They don’t get far before rifle fire erupts from the dense forest on the slope. 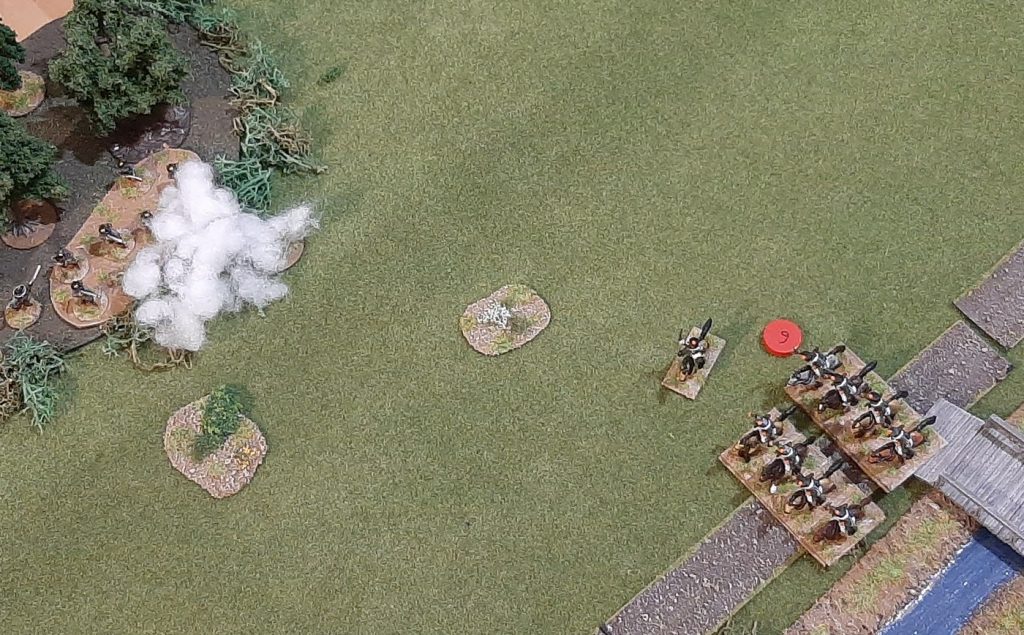 With the position of the enemy sharpshooters revealed, the French deploy their main asset: They hauled a small cannon along with them and start to light up the forest. More locals open fire at the cannon crew from within the glassworks buildings. Lt.Duponchel is wounded and two of his fellow artillerymen are killed.

The light cavalry get shot up as even more Styrian Schützen unveil their position in the forest. The remaining chasseurs retire off the table. Feeling rather like getting into this god forsaken valley was a bad idea to begin with, I hastily send in the skirmishers. Skirmishers fix everything. One group try to assist the gun returning fire at the woodline while the other skirmishers group deploy so the nasty snipers in the glassworks can’t do more damage to the gun crew.

With the leader of the gun crew being wounded (and thus having his status reduced to zero) it’s rather hard to get them to do much in general though. On top of that the first two shots fired by the gun leads to a thick smoke cloud, rendering the gun pretty much useless in this position and without proper leadership. That’s bad.

Realizing how the gun won’t be doing much for a while I have both my groups of skirmishers move straight up the slope to engage the enemy snipers at close range. That should at least eliminate their advantage at long range due to their rifled muskets. Distaster strikes again, as Sgt.Mercier, leader of one of the skirmisher groups is knocked out. (Spoiler: …and would stay down until way, way late in the game, when his unit didn’t really manage to have any more impact)

At least they’re not sitting in the way, so I deploy the rest of my force (5 groups of light infantry), all in one open column, moving down the road.

The French light infantry’s higher rate of fire pays dividents, and the Styrian Schützen are forced to retreat into the woods. That doesn’t go as smoothly as planned, and the French skirmishers, hell-bent on revenge, charge into the dense forest. They catch up with one of the groups and the Schützen are taken prisoner. Without missing a beat the French continue hunting after the other group of Schützen. 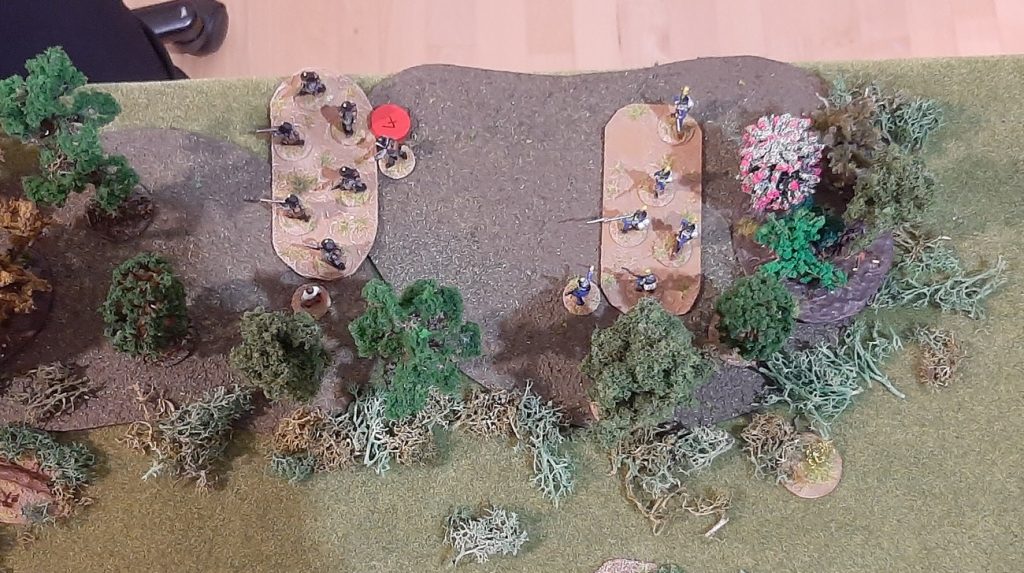 Meanwhile the French column march down the road and cross the Traisen to the South. The Austrian commander identify this as an opportunity and has his three groups of Landsturm militia march deploy and fire a volley into my infantry column’s flank. 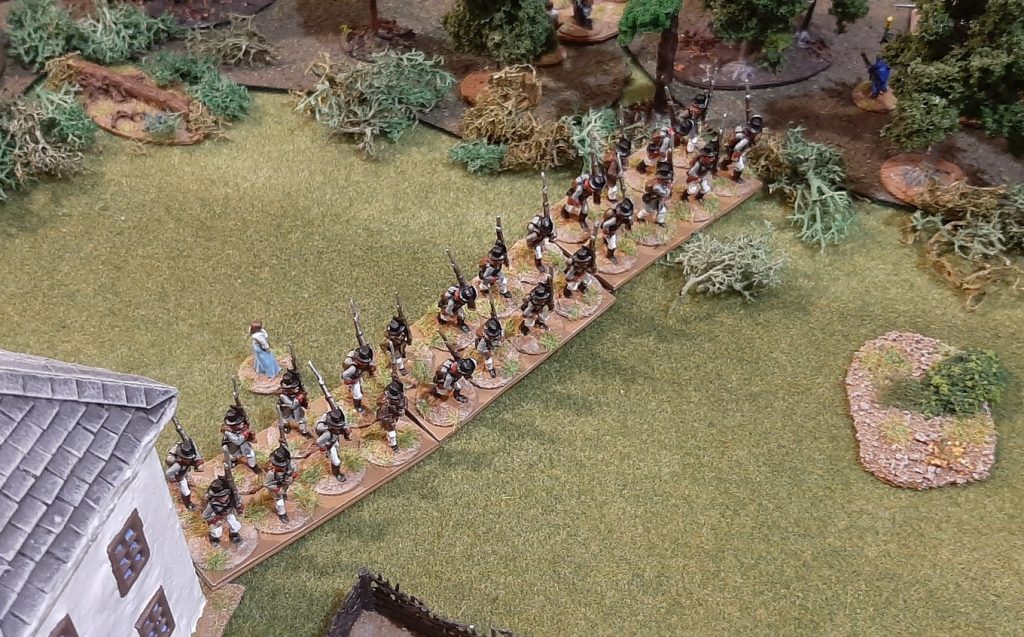 Annoying. This slows my column down a little, but turning aorund is no option. Instead, Capitaine Laborde is ordered to detach the hindmost two groups and leads them against the Landsturm line. Not necessarily to shoo them away, but in part to goad them into standing and fighting.

The rest of the column (now three units) proceed towards the glassworks, which prompts the Schützen sitting inside to leave their position and seek out other targets (like my poor skirmishers!). 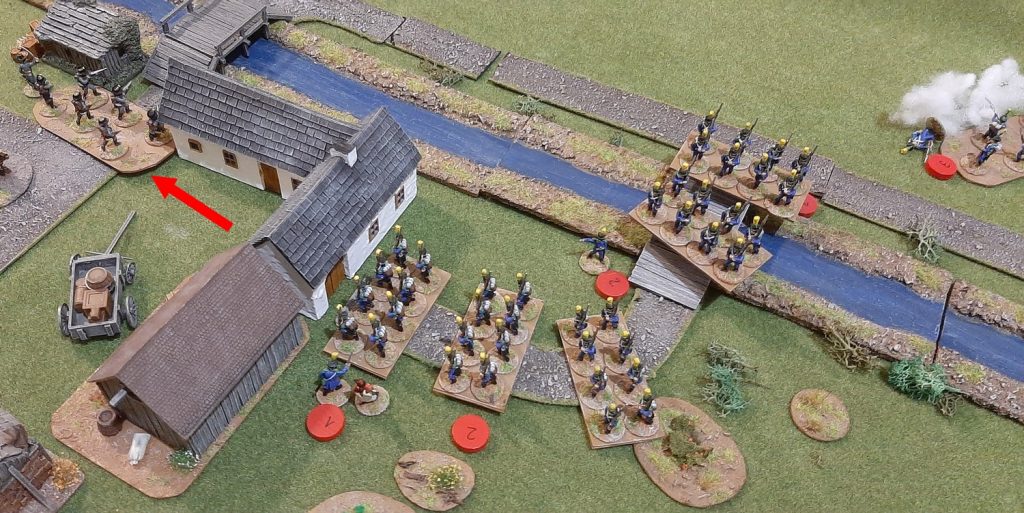 The seekery goes on for a bit too long. Col. Guyardet leads a group of light infantry (and the sapper) through the gate and straight towards the Schützen. They try to evade, but are caught and are forced to surrender. Skirmishers in close combat, unloaded, charged in the back, … it just adds up. 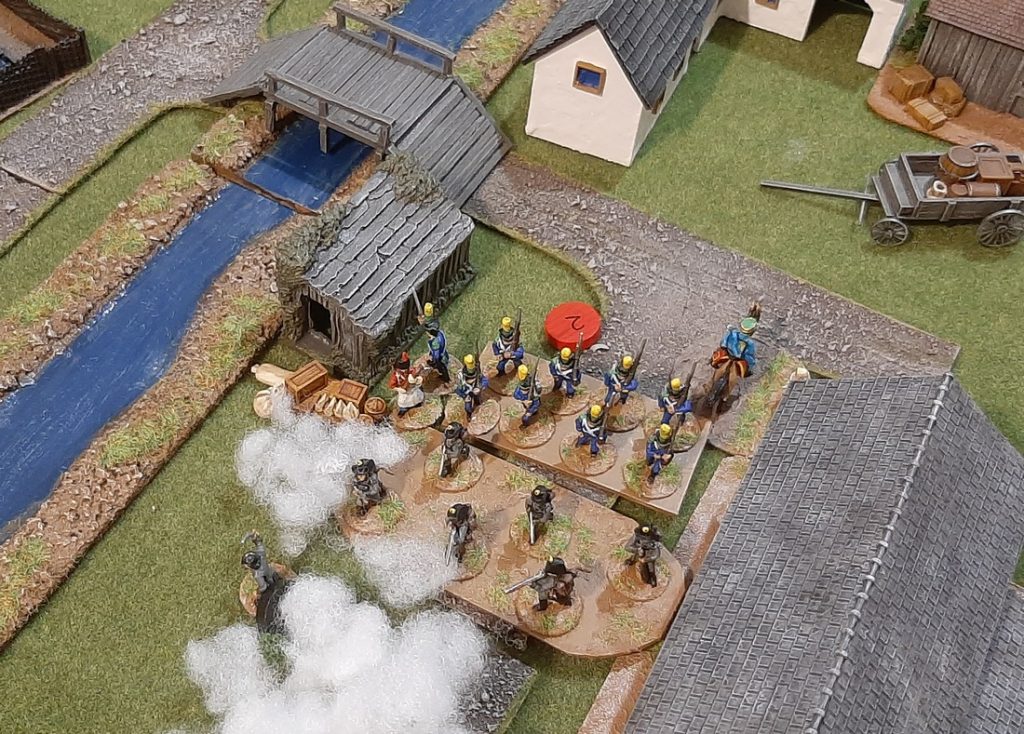 Meanwhile the Austrian commander, Major Graf von Clary und Aldringen, joined the Landsturm in the field to organize the retreat himself. The Austrian Force Morale is in a bad way at this point. The French Force Morale took some annoying hits early on (due to the Chasseurs getting shoo’d off and some wounded lower rank officers), but sits pretty comfortably at 6 or 7 since then.

With the southern part of the board firmly in French hands and the Austrians on the run the French commander looks for a way to seal the deal, so he urges his little group on to sprint down along the river Traisen to capture the Austrian Deployment Point.

Despite harassing fire from across the river, they just make it in time before the Austrian units get off the table.

An overview of the situation at the end of the game: 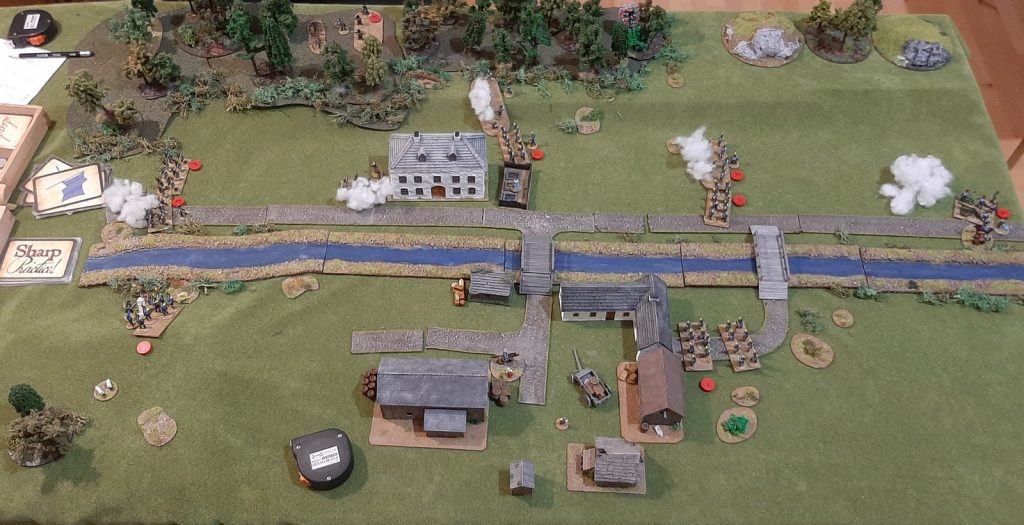 What a tricky, tricky scenario for the Austrians. Designing a scenario is one thing, designing a very asymetric one is a whole different thing, especially if it’s supposed to reflect an actual historical action. After the game we had a chat about possible changes to the Austrian winning conditions and so on. Several ideas were thrown around. The interesting thing is that the scenario doesn’t just have to work as part of a campaign, but also as a fun game in itself. As the scenario stands now, all the Austrian player can do really is delay, while also trying to reduce either their or their opponent’s Force Morale.

I’m sure that this scenario will get some more testing, but either way, this campaign is off to a very interesting start. The past campaign was rather symetrical and classic games. Which is great, but of course the asymetric situation certainly is interesting from a design perspective. I’m looking forward to seeing how this develops further!

I hope that you enjoyed this battle report, and if you have any ideas or suggestions for asymetrical engagements in Sharp Practice, let me know in the comments!

"WITHOUT GOOGLING
Name something every muppet can name"

Is one of those things should get insta-muted. THIS is how Twitter moderation automatization should work.

I'm in bed, post-op, but dropped in to remind you that our joint INDIEWINTER10 promo ends midnight tonight. Check @BadSquiddoGames @Exit23Games @FenrisGames @Fogou_Models @second_thunder websites where you can use the same code above to grab a nice discount and Support Small. https://twitter.com/FenrisGames/status/1597330386191015936

Having briefly re-opened post teaching, the Fenris workshop's now closed again for a couple of days. Got a minor surgical op tomorrow and won't be fit to do much beyond sit up in bed. Keep those #INDIEWINTER10 orders and RC2 Pledges coming in!

Buncha days with @Ghostery 's "Never Consent" function - yeah, it's supergood and improves life. Only sites it doesn't seem to work on is Twitter and Google. Still, there's no reason I could see to not use this browser extension.