After a little pandemic-related pause, Cpt.Shandy‘s Summer Games Day made a glorious return with The Grand Prix of Monte Chaoso!

These summer events are great. Cpt.Shandy rounds up a bunch of friends (not necessarily wargamers) and has them partake in big, light-hearted multi-player miniature games. Here’s a quick report of the 2019 edition.

For a good while we’ve been toying with the idea of having some sort of wacky fantasy chariot racing game. Then the pretty cool Gaslands rules came along, supplying “wacky” and “racing” in droves. All we had to do was add in fantasy chariots (of which Virago and I had some and then got some new ones) and we’re off. 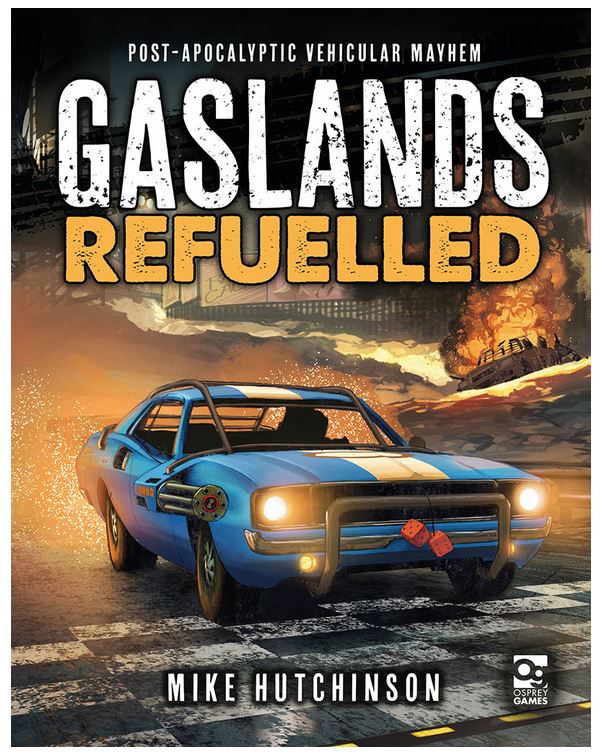 Gaslands is one of those Osprey games which proved popular, so they gave it the hardback-treatment. By now the plan behind Osprey Games cluster-bombing us with little rules sets for EVERYTHING remotely popular becomes apparent – the ones which are proper popular get a hardback second edition, with less tight restraints on page numbers. Interesting. And it seems to work.

Without getting into a rant about the top 50 reasons why everything that’s popular is bad – Gaslands works pretty well. A few weeks prior we had a test game with three chariots which helped getting an idea for how to handle the bigger footprints and ‘weapons’. This got virago’s creative juices going, and he worked tirelessly on getting more chariots done, as well as some terrain. 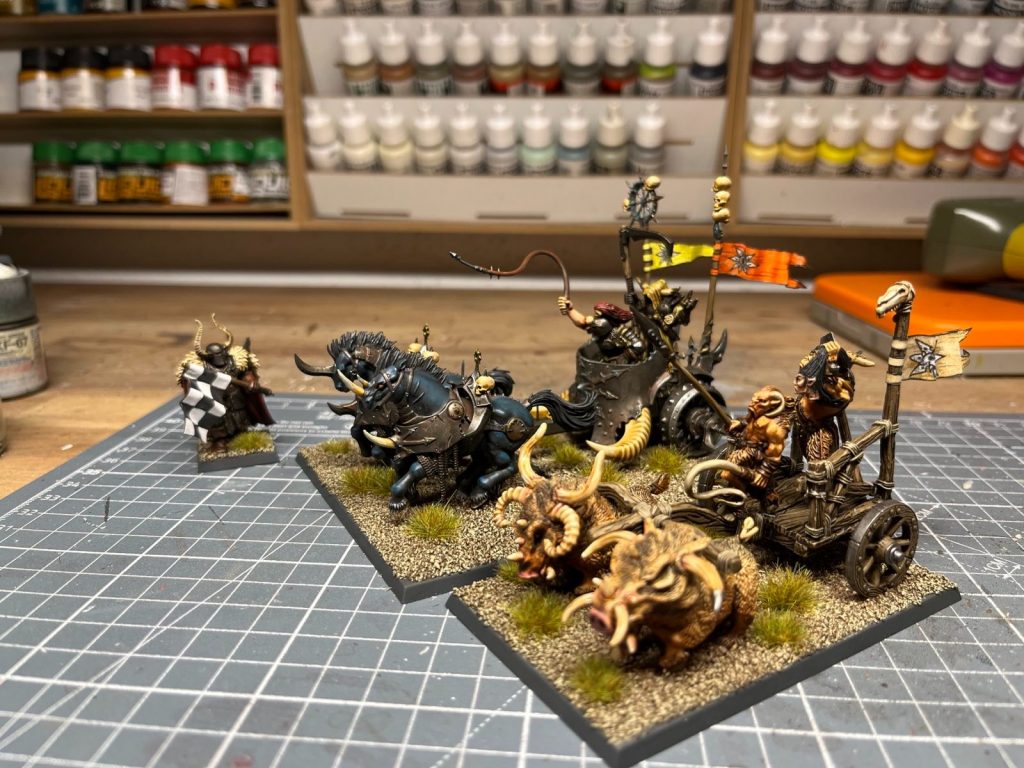 Not too much, because with the projected number of players, each commandeering one warhammer chariot (regular base size: 50x100mm), we’d need all the space we can get for racin’.

Me, I at least fixed one chariot from my Dark Elves army and finished the green stuff flag I’d made for it almost 20 years ago. Also rebased it, which kinda forces me to rebase all of my army from snow to regular grasslands, but that’s a worry for another day. 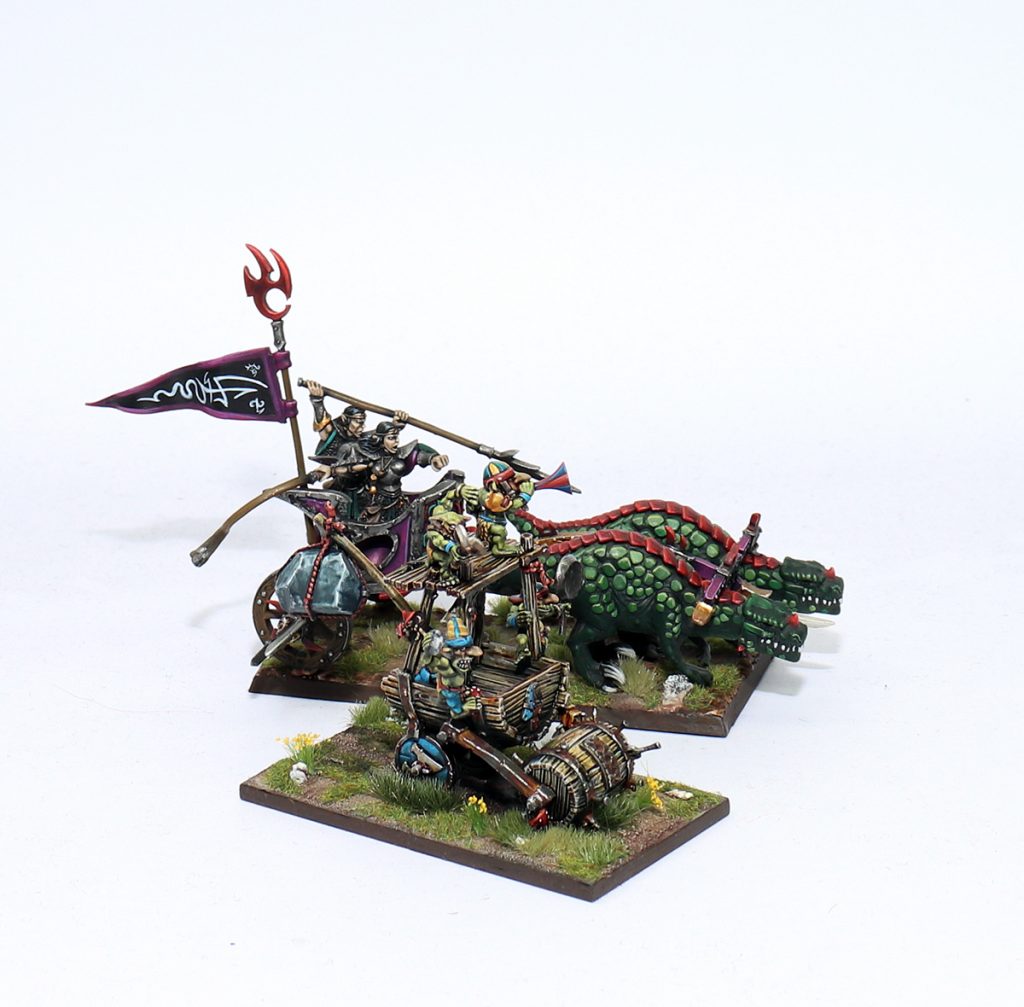 I also built and painted the latest iteration of the Snotling Pump Wagon. A few weeks ago I bought a Snotling Blood Bowl team set, because it struck me as a good way of getting my hands on a good amount of funny looking little evildoers as opposition for cooperative fantasy skirmish games. I also really like the look of the new pump wagon. It’s a great set for those numbers of little critters alone, even though there’s two of each in there. 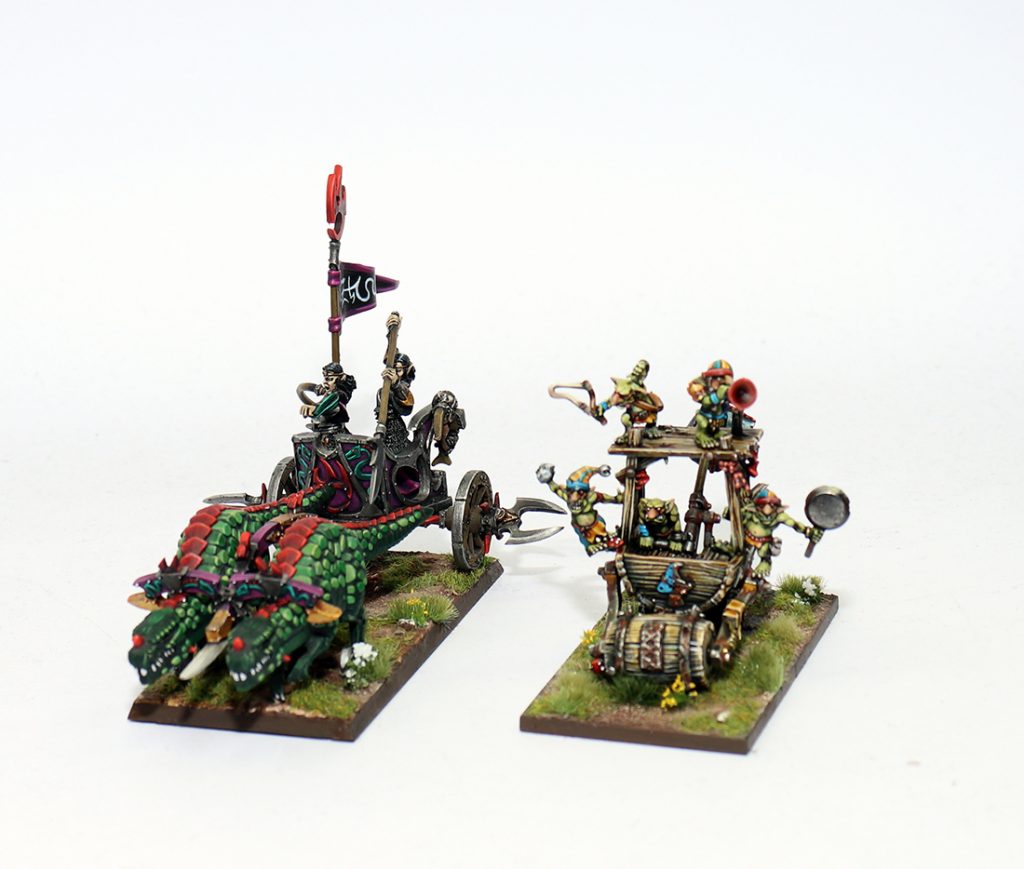 On the day of the great race we met at Cpt. Shandy’s and the race track was set up. The Grand Prix of Monte Chaoso of course takes place in the Chaos Wastes, which is why only the baddest of the bad(d) are allowed to participate.

The track starts in the upper right. We were to somehow get past Catering (cleverly set up right at the centre of the action), pass the Shrine of Khorne, then slingshot around the Shrine of Slaanesh, cross the race track and head straight for the finish line, across a little jumpy cliff. 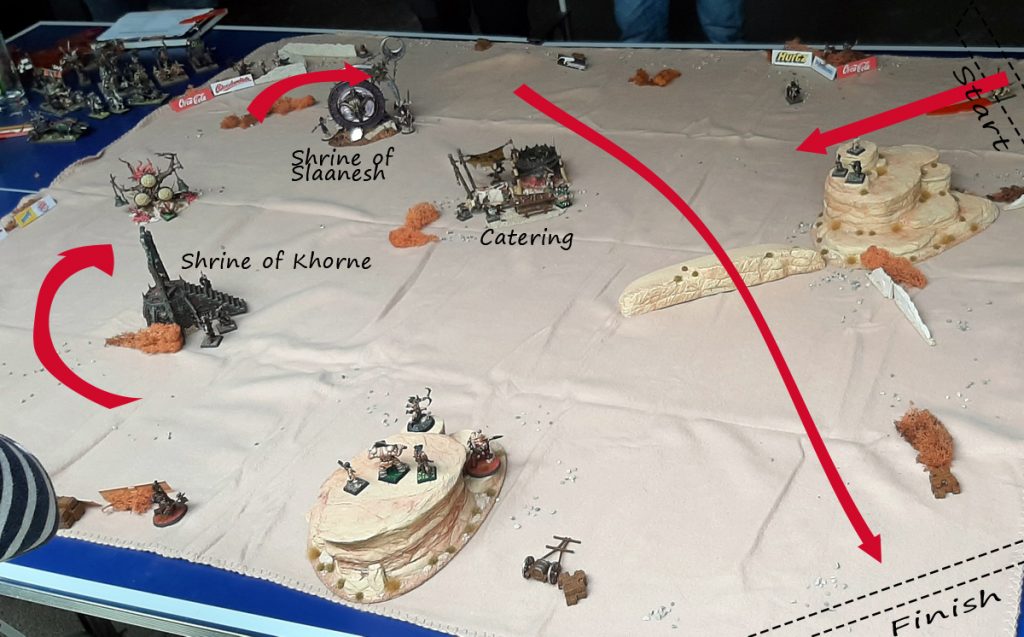 Each of the 10(!) participants chose a chariot or a wolf rider (counting as motor bikes in terms of Gaslands rules) and lined them up at the start line. We diced for who was to start in the first or second row. Cpt.Shandy, keeper of the rulebook, had printed  little sheets for each participant. Of course each of us had to come up with a punny team name. Hü-hott describes how many dice we were allowed to use max. per turn, Bumm-Zack indicates our firepower. 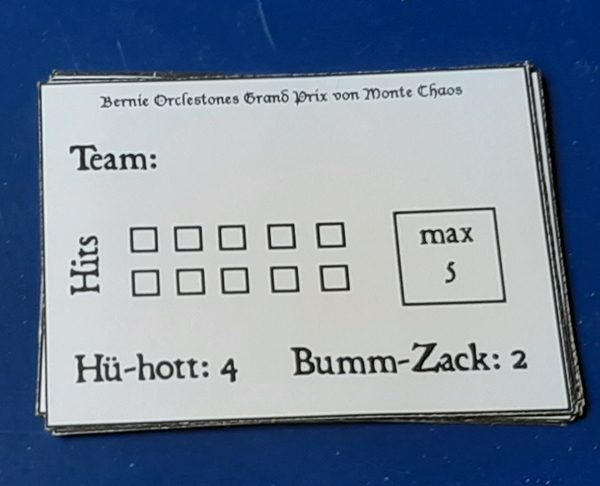 As for shooting, each racer was allowed to fire once per full turn, long range band at 360°. The exact nature of the missile (magic, arrow, potato) was for each player to decide.

In rules terms all chariots are the same, motorcycles (wolf riders) have a Hü-hott of 5 and a Bumm-Zack of 1.

…and we were off. I play Grom’s chariot (Grüne Maschüne), drawn by three wolves. Got a good placement to start from. You can see how wolves and chaos steeds proved to be faster in training than boars, tuskgors or Cold Ones.

Things get messy right from the beginning, as Unicorns from Hell – the heavy chaos warrior chariot – accidently turns by 90°, almost blocking half the race track for the ones coming up behind. The base size of the chaos chariot is immense – two regular chariot bases sideways! 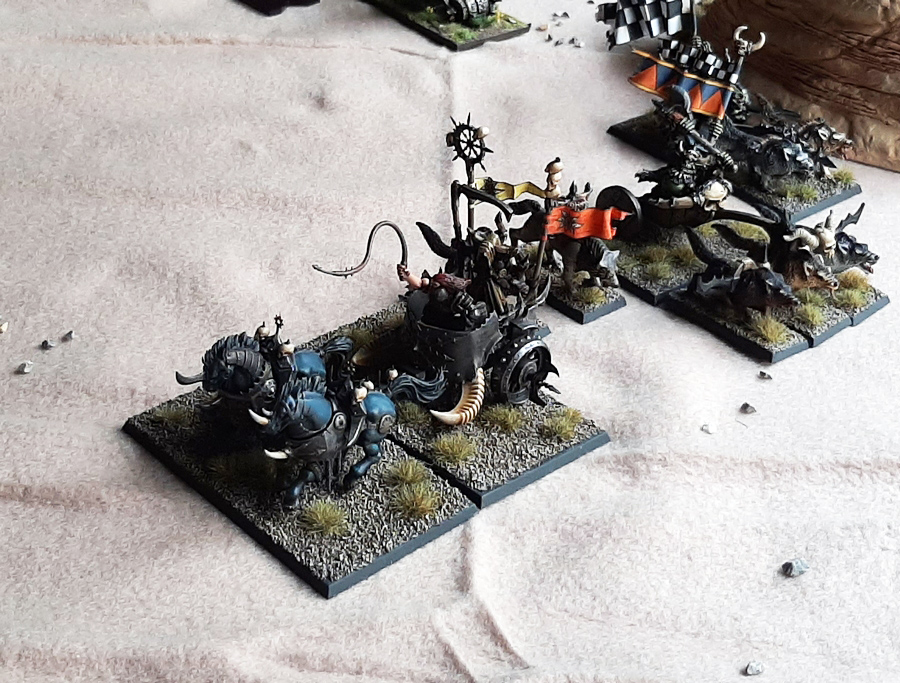 Just a minor setback, and soon Unicorns from Hell is back on track. My Grüne Maschüne heads the race along with another wolf-powered goblin chariot, Karo-Line, and the two wolf riders hot on our heels. 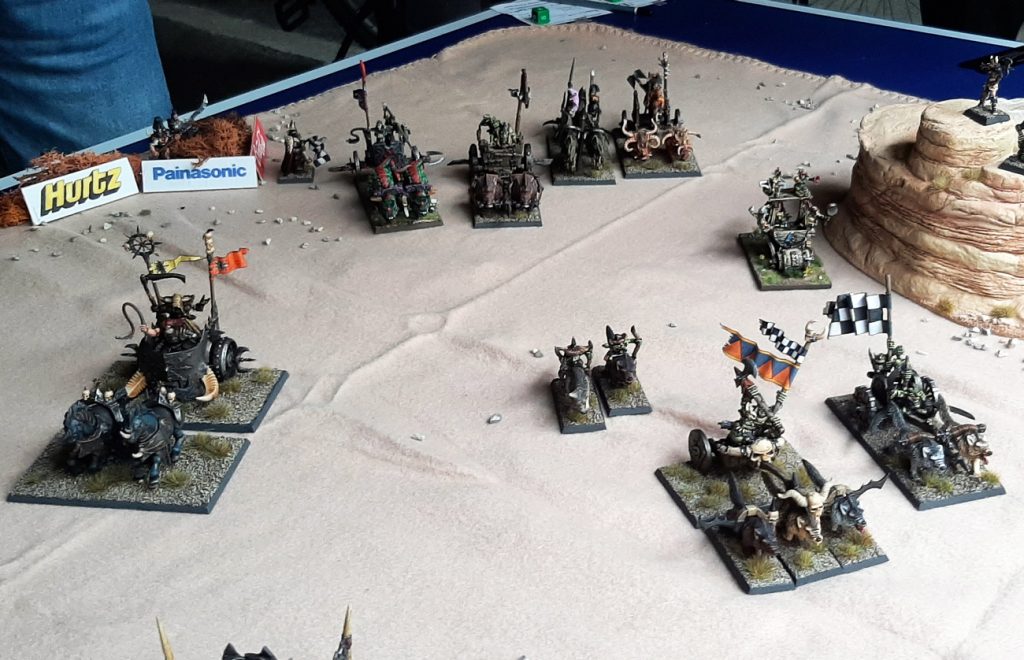 My chariot’s crew are incredibly amused with the misfortunes of the lumbering chaos chariot and lose control of the wolves! Wipe-out, somersault to the front. To be fair, it catapults me forward a fair amount, but has my Grüne Maschüne face the wrong direction! The audience are overjoyed. That’s what they came to see. 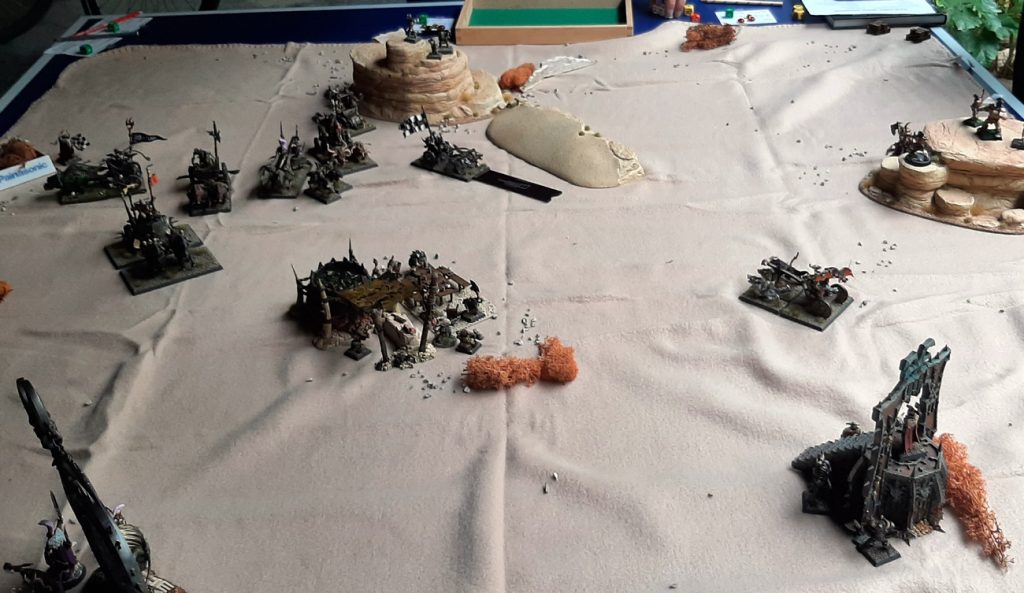 This gives the other competitors some time to catch up. The beastmen chariot Ded Bulls is doing alright, until they get in the projected way of ‘Pumped-Up Goblinz’ (Snotling Pump Wagon). 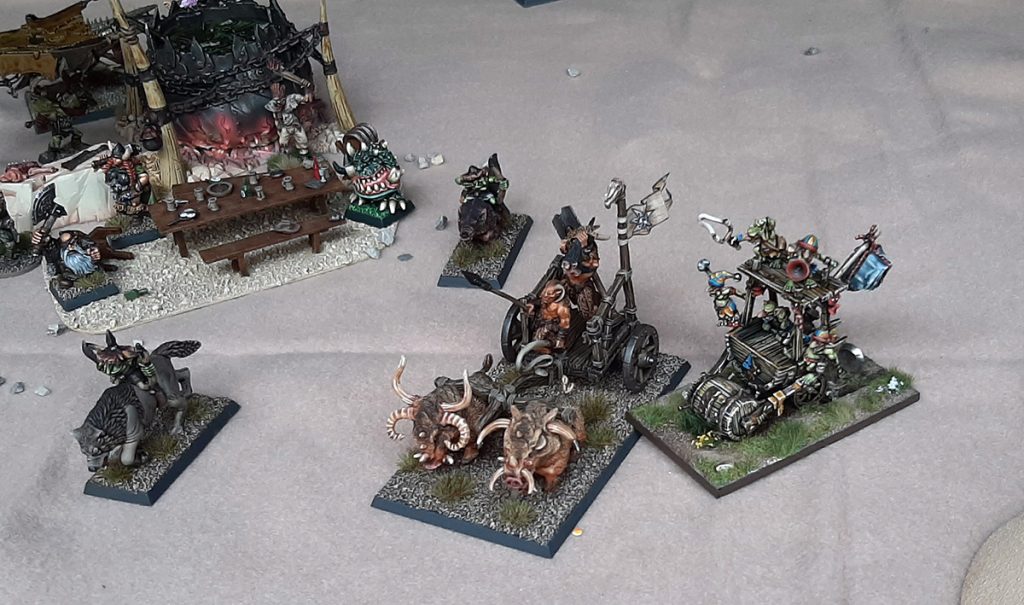 The crews get mighty aggrevated as their machines crash into each other. This starts a feud which would last for a good few turns. Mere seconds later, the snotlings steer their vehicle into the flank of the Tuskgor chariot once more. 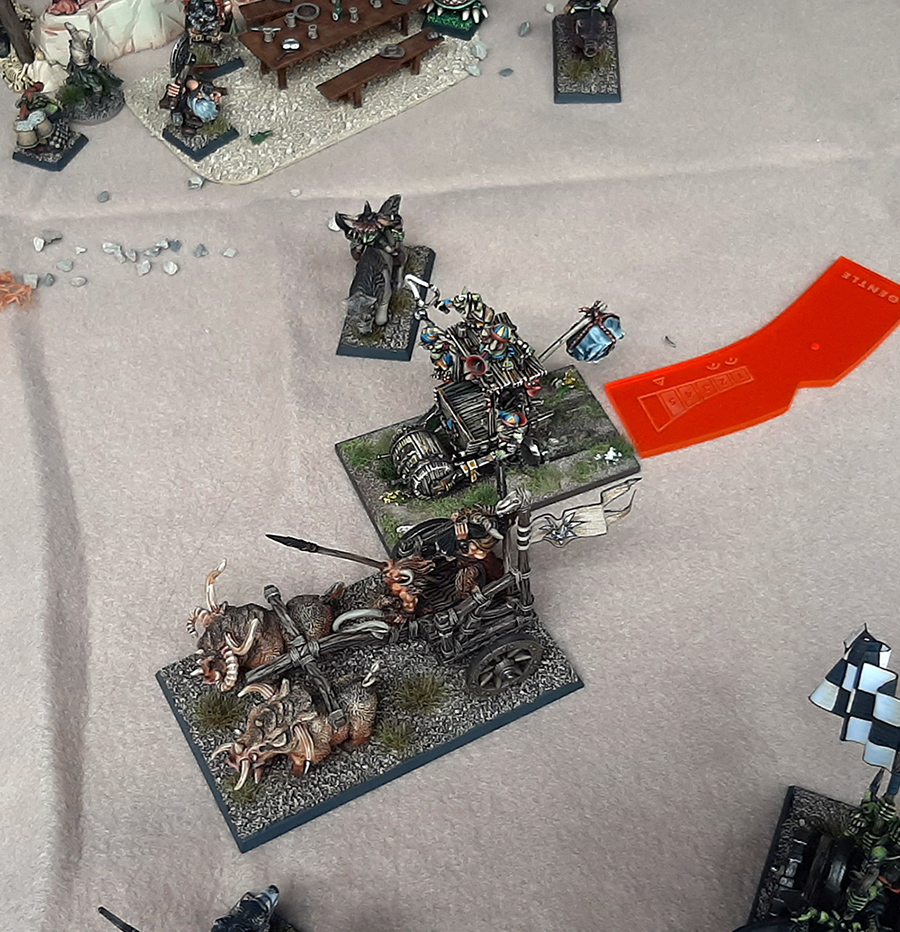 Forced by the tides of chaos Unicorns from Hell, along with the two Dark Elf chariots and the boar-pulled Orc chariot ‘Orco Rosso’, take the other way around Catering, not the least to avoid getting caught up in the fight between the beastmen and the snotlings. 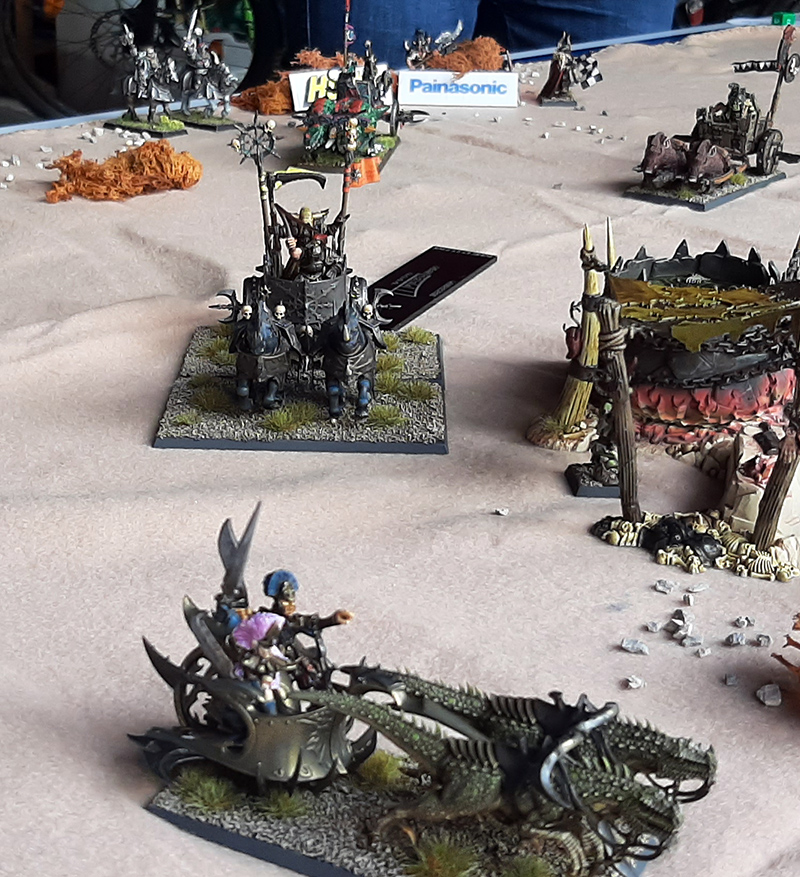 Dark Elf chariot Jurassic Punks takes the lead at that end of things. Which in fact is a fair bit further back than the spearhead of the race. My Grüne Maschüne is about to pass the Shrine of Khorne (still with Karo-line hot on their heels), passing the recently wiped-out Beastmen chariot Ded Bulls. Or are they just turning to smash into the snotling pump wagon for revenge?

One of the wolf riders also had some trouble and has to get back up on their wolf.

Grüne Maschüne rumbles around the shrine. The crew of Karo-line (the lighter wolf chariot) want to take the bend around the shrine even closer than my chariot did to catch up, but there’s a mishap.

The wolves run into a chaos hedge, can’t see, and the chariot wipes out. For the rest of the race they don’t quite get rid of the shrubbery and take it along for the ride! The audience loves it. Especially when the shrubbery-laden chariot passed by the Nurgle tree, hitting two big bells! 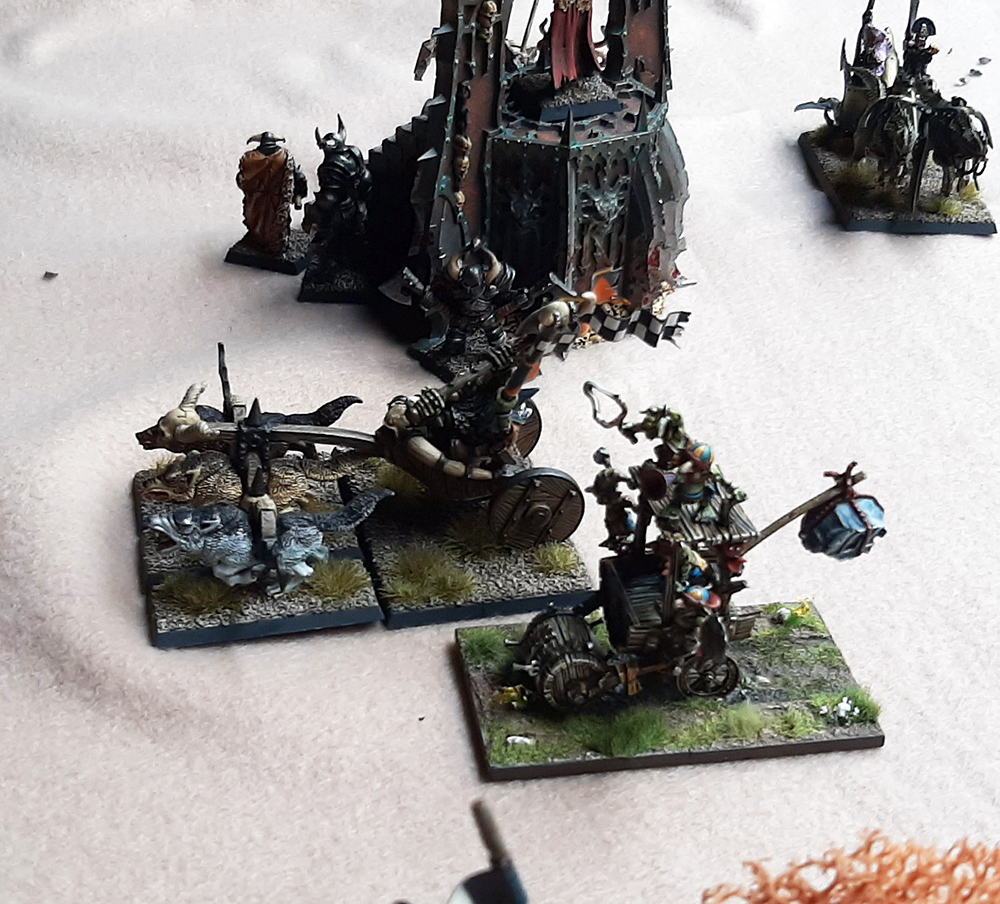 This takes Karo-line out of the race for now, but the sneaky snotlings quickly catch up on Grüne Maschüne! Their vehicle’s only holding together by a thread after all the fighting with the Ded Bulls, but snotlings are used to that.

Since the first chariots passed the Shrine of Khorne it’s ‘weapons free’ on all competitors. Shots will be fired. So far rather ineffectually though. The pump wagon’s wagon-pumping snotling is fed some glowing mushrooms and the rickety vehicle speeds up. They are even nimble enough to pass the hulking chaos chariot which suddenly turns up to their right. Unicorns from Hell got off the track again. Grom, commander of the Grüne Maschüne, hurls a barrage of insults and magic curses at the Chaos chariot, but everything bounces off their massive armour. 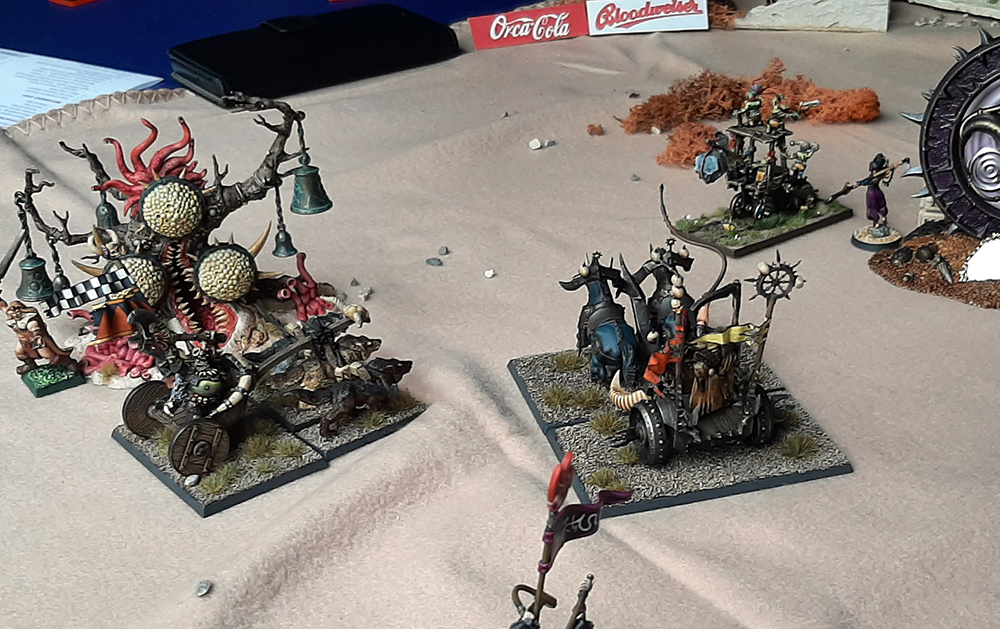 The Pumped-Up Goblinz – having taken the lead – get cocky and speed up more and more as they pass the Shrine of Slaanesh (allowing players to ‘push their luck’ from now on and take additional stress tokens to re-roll dice). They are way in the lead, the only thing  between them and the finish line being the little slope. Halfway there  the frantic pumping to get more speed on the wheels takes its toll on the already beaten up machine. The pump wagon breaks down! 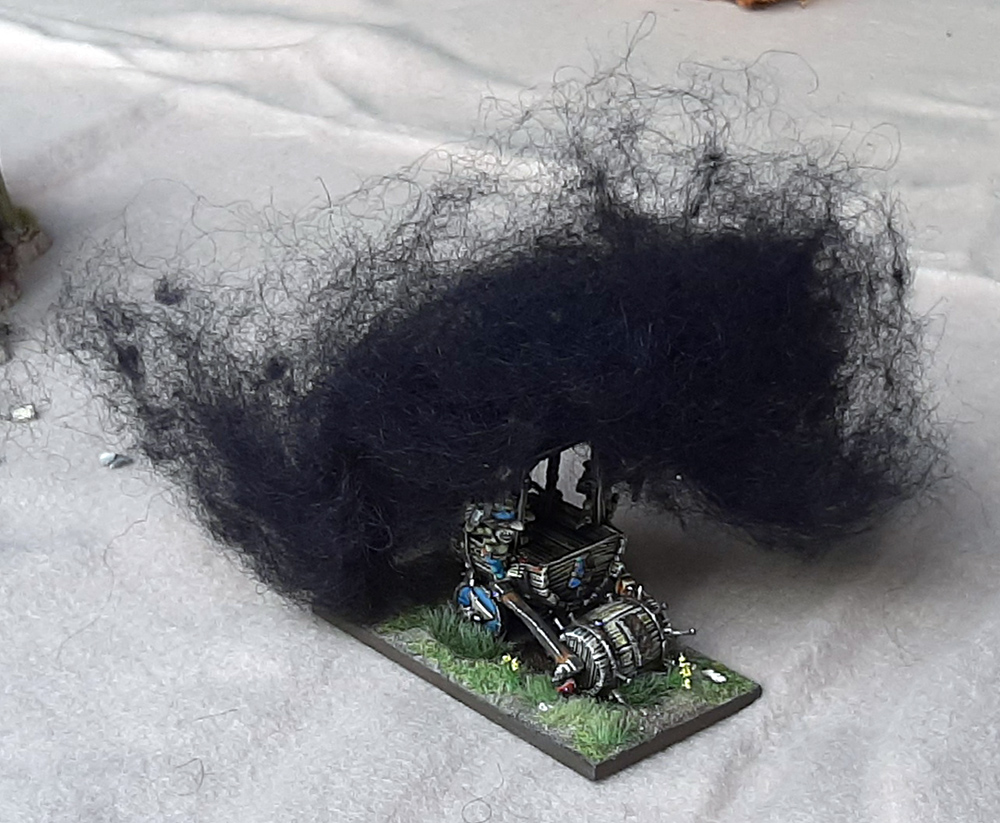 The disgruntled crew get out of the wreck and go to catering. Seeing that the race is still on, two goblins who thus far hung back decide to be surprise participants in the race now! (the snotling pump wagon player got back in the game as a wolf rider, and we had an 11th player join the  fray as well!) 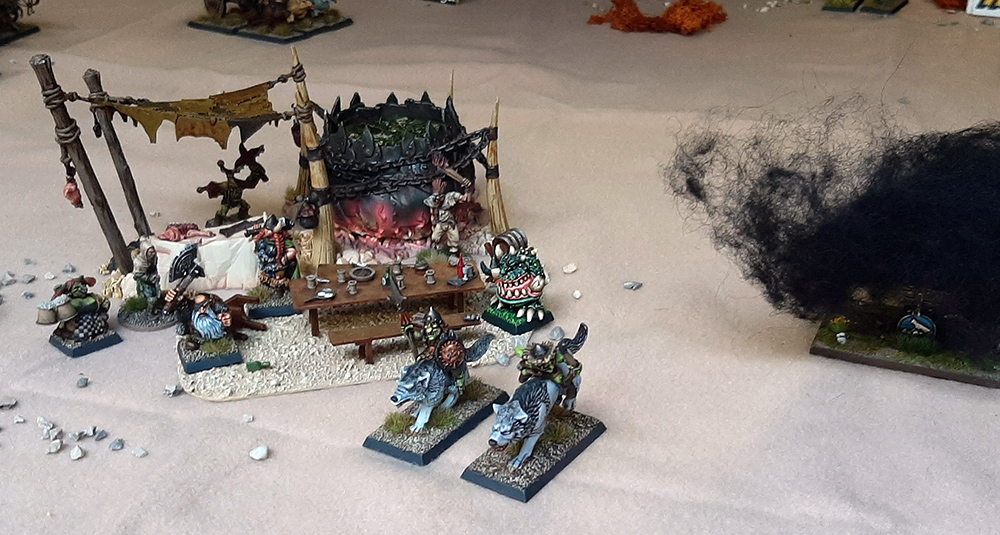 Not long thereafter, Orco Rosso, after a spell of horrible dice luck finally and quite literally run into a wall in front of the Shrine of Khorne. 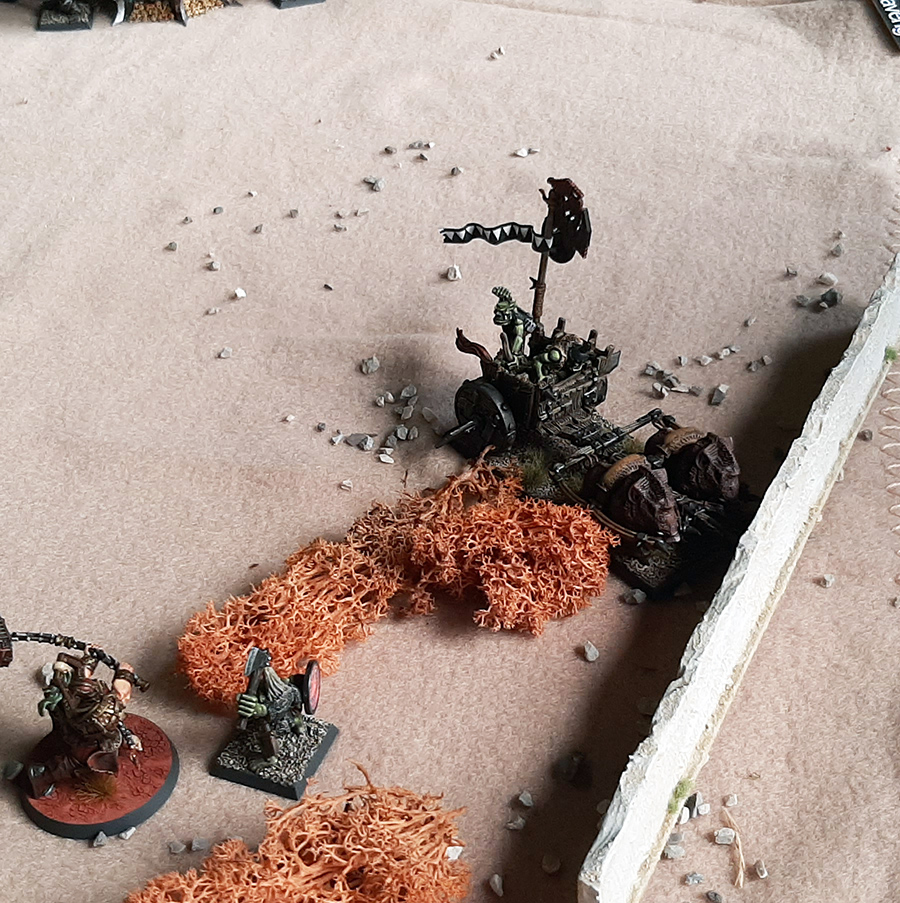 ‘Sod it’. They’re off to Catering as well for some fungus brew.

By means of sensible maneuvering and excellent dicing skills Jurassic Punks (who for a while called themselves Jurassic Express) catch up to our new leader, Grüne Maschüne! 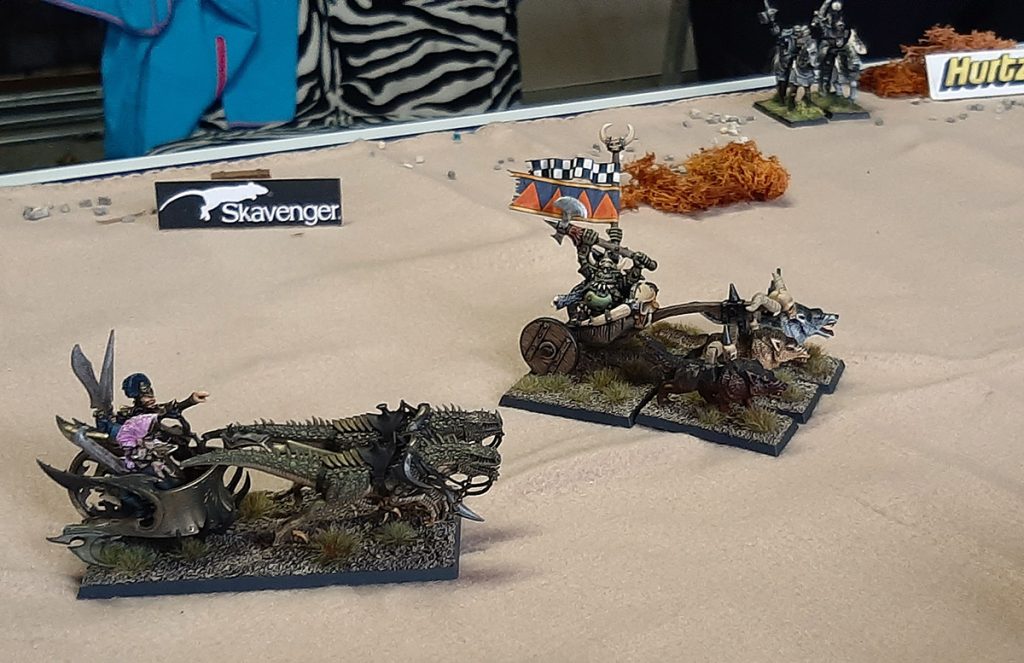 Jurassic Punks are closely followed by a wolf rider who peppers them with a barrage of arrows (seems like the chaos gods find all the shooting amusing and thus supplied the goblin with an Quiver of Endless Arrows). Not one hit so far though.

Still, the sheer volume of fire must have thrown the crew off a bit. They wipe out, overturn, and end up heading the wrong way. Grom, on the Grüne Maschüne, drives by at top speed, cackling at top volume. 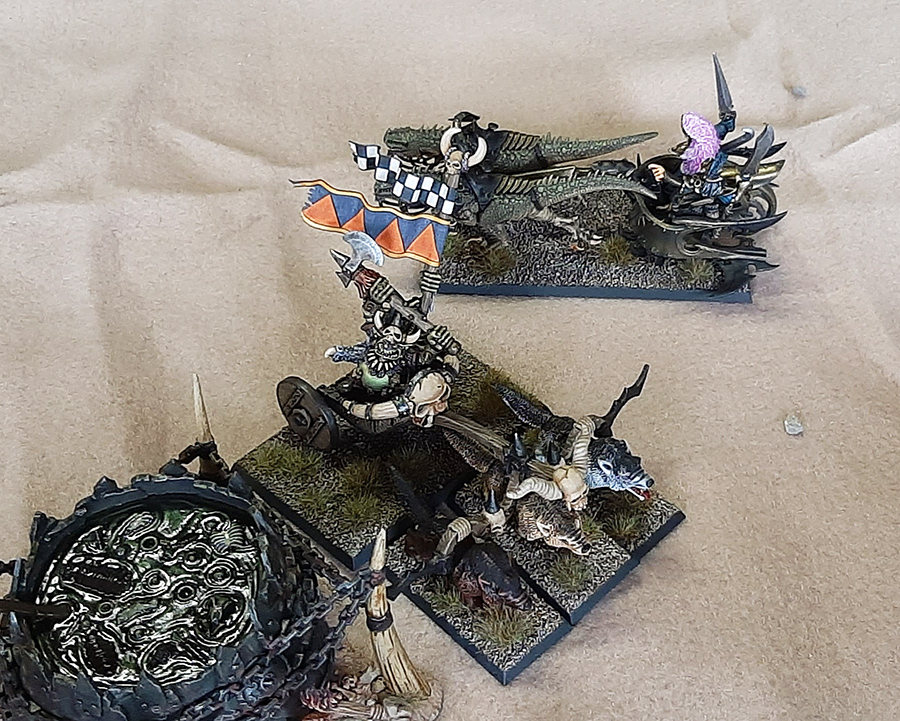 The wolf rider catches up, fires one more arrow, and finally hits! A personal victory for the goblin, who does a little victory dance on the wolf’s back. 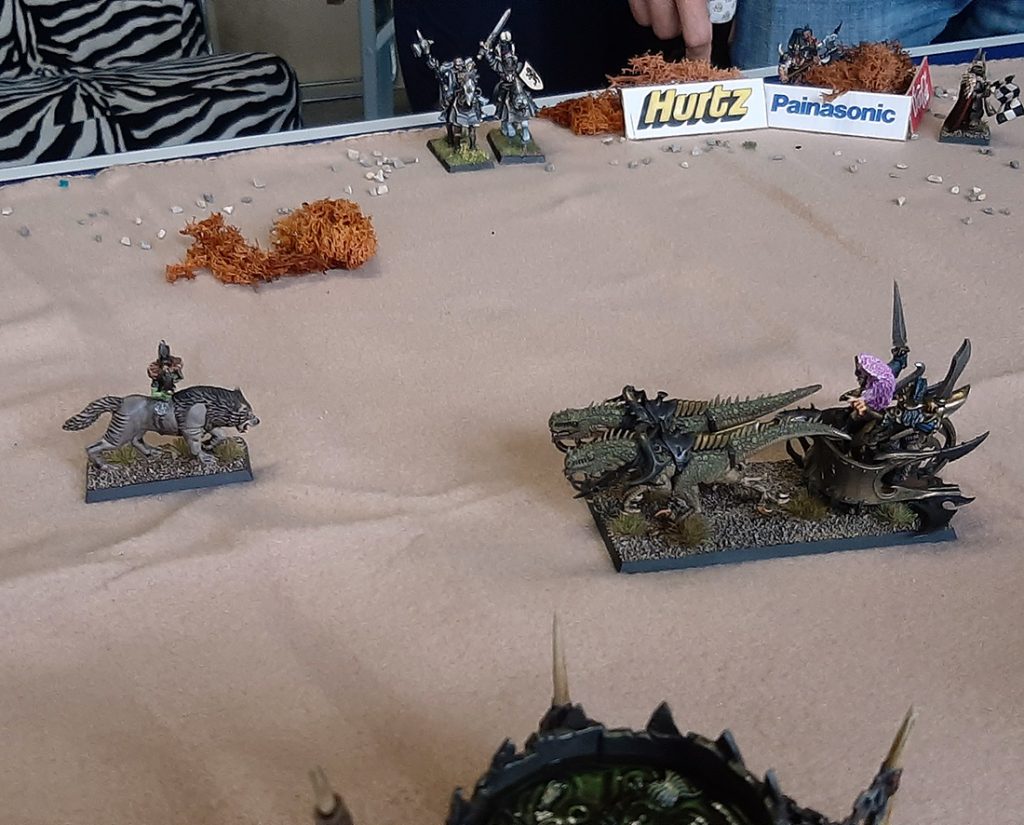 Victory at his grasp, Grom commandeers his Grüne Maschüne straight through the smolderig remains of the pump wagon. they catch a little bit of smoke, but that won’t stop them now! 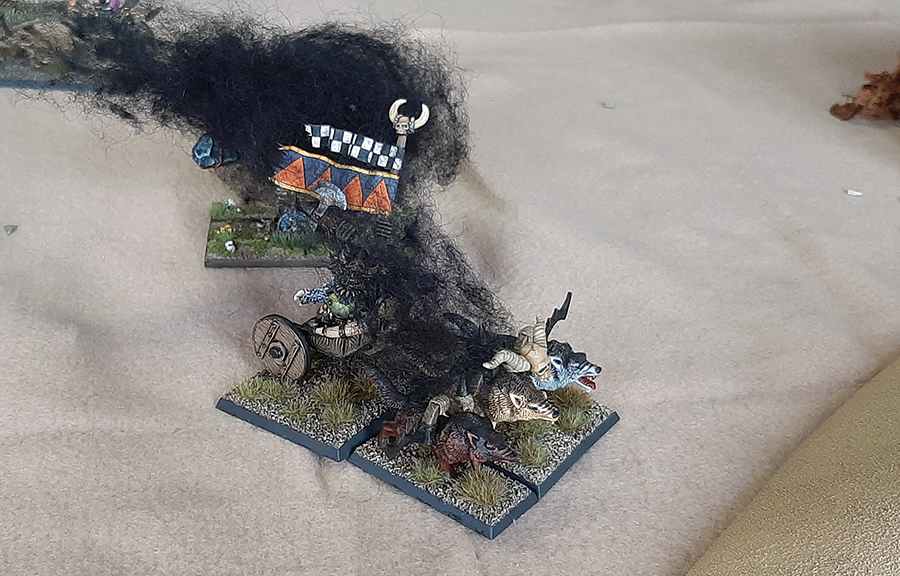 They take the leap across the cliff, wipe out, but for the first time in this game do NOT overturn. They are slowed down considerably, so by sheer momentum Grüne Maschüne make it across the finish line! 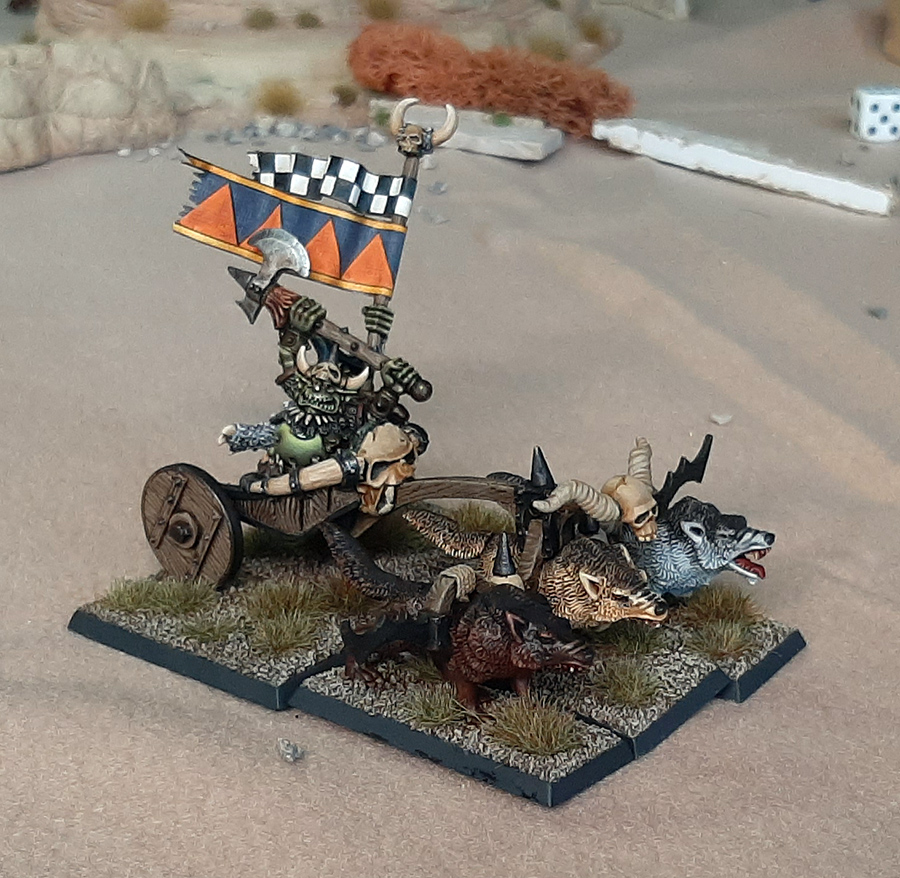 Okay, eleven players is pushing the boundaries of Gaslands, but that’s okay. The size of the models of course is roughly four times what’s usually played in Gaslands too. The game took roughly four hours to complete and I think everybody had fun. Even the younger players’ attention was caught from beginning to end, which speaks volumes for the game and the whole setup.

Was it a perfectly balanced game? Of course not. Base width makes a big difference (ask Unicorns from Hell!), but on the other hand base length also gives a slight edge. Well-meaning dice also help. But with a game such as this there’s no point in approaching it with a tournament mentality.

A very memorable game, a good time, and the weather kept well too. There was the odd gust of wind (one proving a bit nasty by toppling the quick reference guide thing which fell onto the Nurgle tree.

Gaslands works really well, be it for multi-played participation games or just a fun racing game.

2 thoughts on “The Grand Prix of Monte Chaoso”

Hey, hey. A few days ago Cpt.Shandy came over for a spontaneous game of Song of Drums and Shakos! Here's the AAR: