After a few months I met with Col.Bourne again to proceed with our Chain of Command campaign.

Even the fourth American attack on La Cambe was repulsed, but the pressure of the enemy advancing left and right made the German positions impossible to hold any longer. Unterfeldwebel Zausel ordered his men to retreat further down the road and set up a new blocking position in the hamlet of Arthenay. Another bottleneck to stop the US column in its tracks, or at the very least delay them until more German forces evacuate across the river. 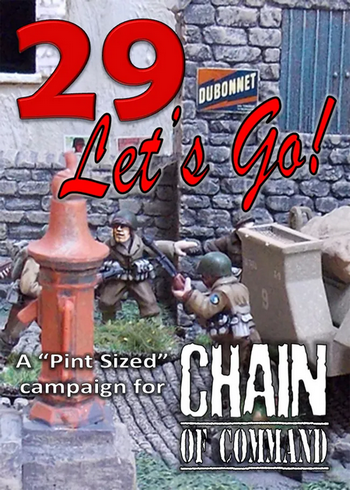 According to the schedule battalion HQ sent along with Zausel’s briefing evacuation should be halfway done by now, with two companies of the 726th and soon two batteries of AR 352 having been moved to safety. However, contact with battalion HQ has been cut hours ago, and there is a supicious smoke cloud to be see over Isigny. Things may not go as smoothly as planned. Either way, the order stands, so it’s time once more to dig in, cover all angles and make ready for the enemy to attack once more.

This AAR will deal with things from a German perspective (since I play the Germans in this campaign). You can find the AARs from the US point of view over on Col.Bourne’s blog Lead Poets Society.

Nothing changed about the platoon structure or how it is put together and due to how well things went so far, the platoon still is at full strength. As per the scenario I’m allowed 10 levels of support, plus one more this time due to the positive impression Unterfeldwebel Zausel’s performance left on his commanding officer. For this, and after reports of heavy fighting at La Cambe, battalion HQ sent over an adjutant to help Zausel organizing the defence. 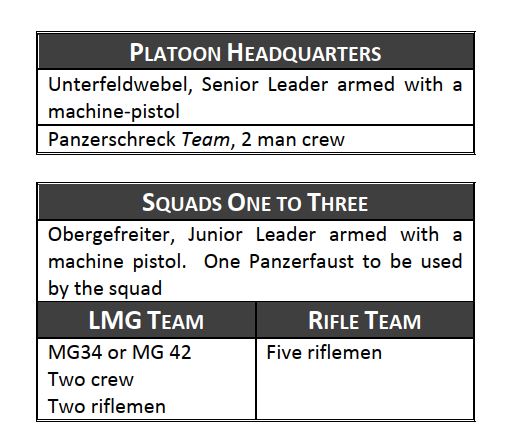 The support once again is a Pak40 with crew and junior leader (I’m ever-worried about all those Shermans the Americans brought to Europe), the aforementioned adjutant (because having just one senior leader can be a pain) and entrenchments for three teams. 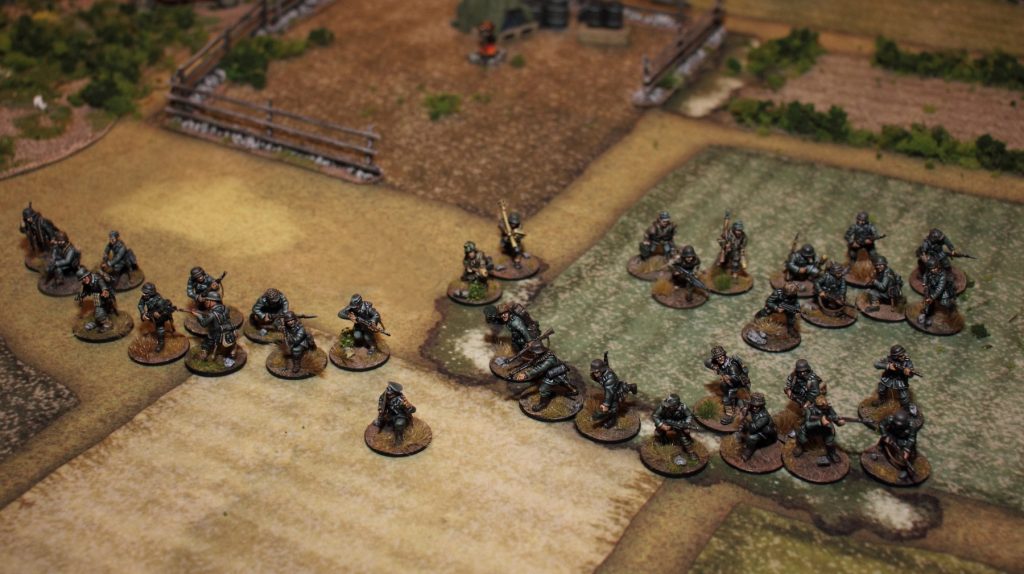 The US side got a fresh platoon and 19 support points for their next breakthrough attempt. 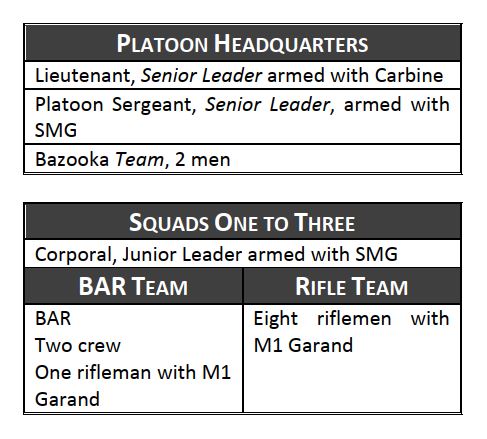 Their support encompasses three Sherman tanks (including a tank platoon leader) and an adjutant. 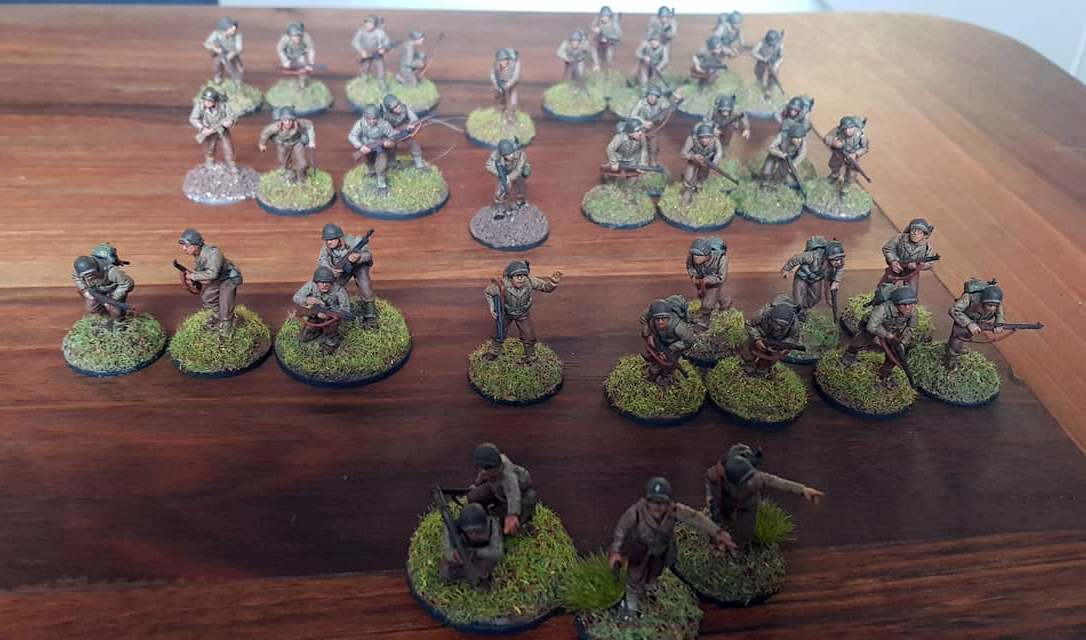 Ceaseless artillery bombardment and the danger of getting outflanked by light enemy detachments forced me to order the retreat to a hamlet at Arthenay. Obergefreite Stanischewski and Lohse proudly presented blackened broomsticks to stick out of hedges and windows and maps with misleading orders and positions. I have no idea when they found the time to make those decoys or where they learned about those things. Old Rauch on the other hand went straight for the wine cellar and secured supplies.

Our repositioning was executed in a most orderly fashion.  That should buy us enough time to resupply and fortify our new position. Still nothing from HQ, but the men are confident that we can stop the enemy once more so our comrades can pull back and rally.”

Other than the first map, this is based on scenario 4 in the Chain of Command rulebook (A Delaying Action). So the goal of the US player is capturing one of the German Jump-Off Points at the back of the table and hold it until the end of that turn.

After several months of no games we were both a bit rusty, but Col.Bourne once more did a great job at setting up the table according to the map provided in the Pint-Sized Camapign PDF.

Both of us weren’t sure what to do with the patrol phase due to how unfamliar we were with the map. The Jump-Off Points ended up pretty much where you’d expect, but we had to struggle with some weird angles for where to deploy them exactly.

The German JOP with the red border is the one the US side have to capture and hold until the end of that turn. The Germans (played by yours truly) start with two ful Chain of Command dice and a nasty surprise for the Americans.

Once more the Americans make ready for an all-out attack. The adjutant allows for them to deploy both senior leaders (the commanding officer and the Platoon Sergeant) to drive on the infantry. Three Sherman tanks appear along the road, although more cautious than the last few times. 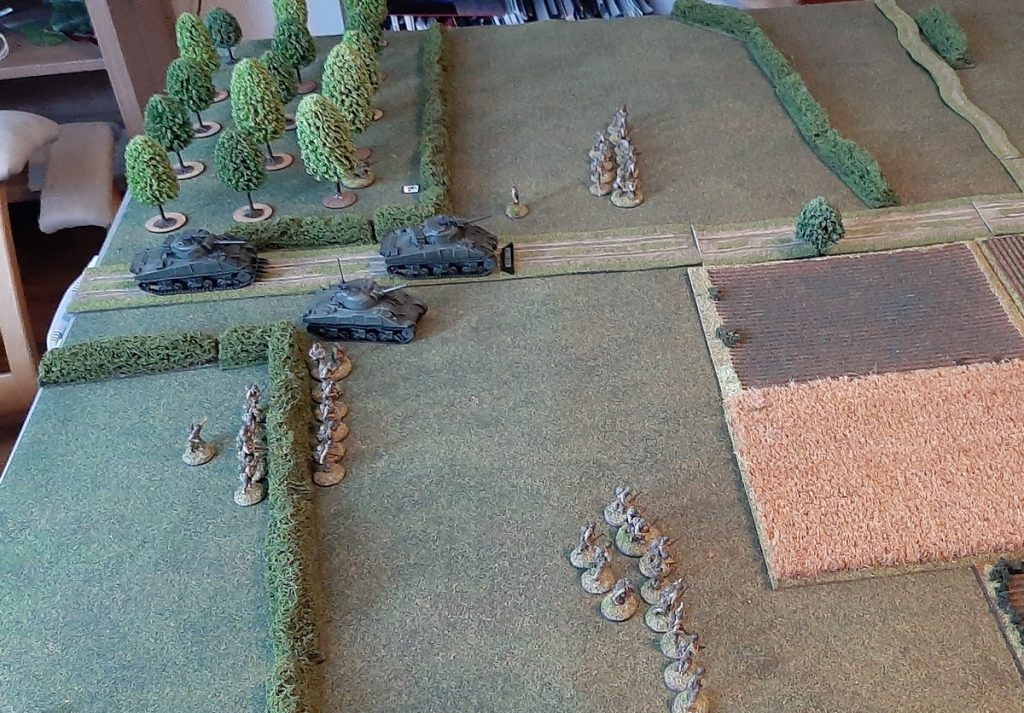 The frotmost vehicle goes into Overwatch as the infantry advance towards the hamlet. The German defenders don’t make a peep and prepare to only give away their positions at the last possible moment, as they have done many times before now.

The US command tank decides it’s time for an armoured assault(tm) and advances beside the road. The advance is suddenly halted by a loud Whizz and a louder Bang. The tank is knocked out and the crew flee the scene. 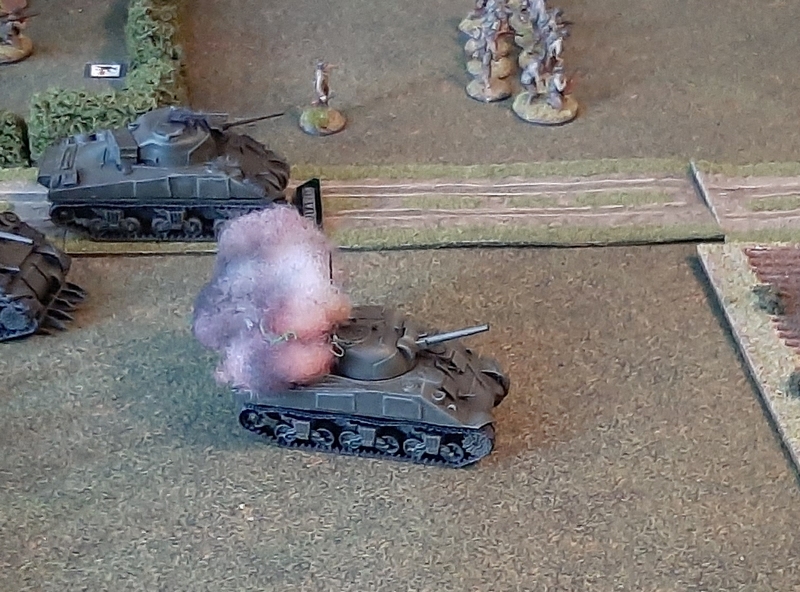 That was the nasty surprise. Unbeknownst to US forces, there’s a pair of Marder III self-propelled guns operating in the area. They can take shots at a US tank from far away off-table each time the German player expends a Chain of Command die.

The other shermans pull back a few metres to seek cover behind the tall hedges and stick to Overwatch duty. Once more it’s the poor bloody infantry’s job to attack. 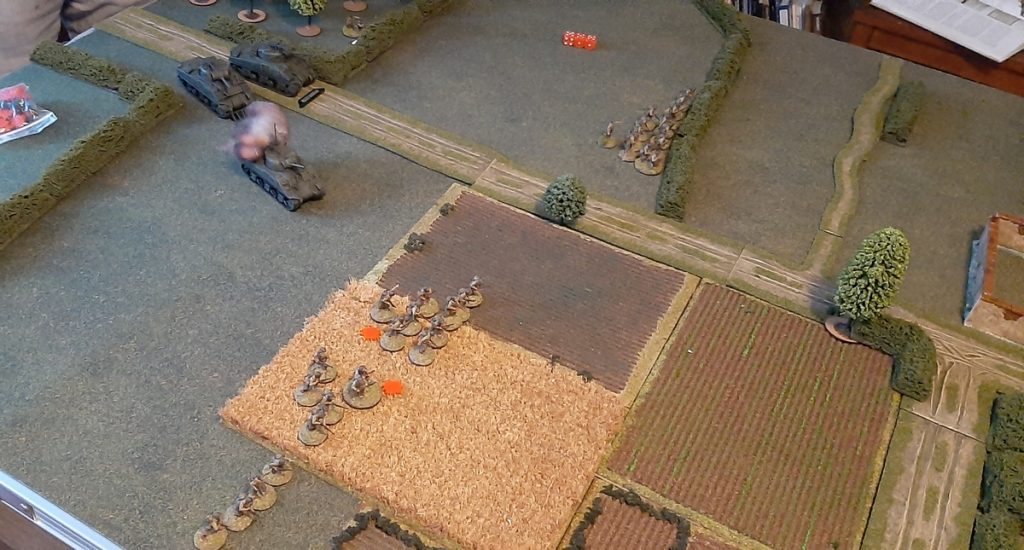 As they advance I get a double-phase (two 6s on the command dice). Well, that’s probably a sign. Two German infantry sections reveal their positions in the building with the all-important Jump-Off Point (Obergefreiter Willi Rauch’s section) and in the garden in front of it (Obergefreiter “Fuchs” Lohse’s section, properly dug in). They open fire at the two US sections who advance through the fields and swiftly take out their BAR teams.

Once the dirty deed is done, the German sections pull back and out of line of sight again.

With their firepower severely cut and sitting in the open, the only solution seems to be to attack. Their NCO urges the men on to fix bayonets and drive these hedge-hugging Krauts out. 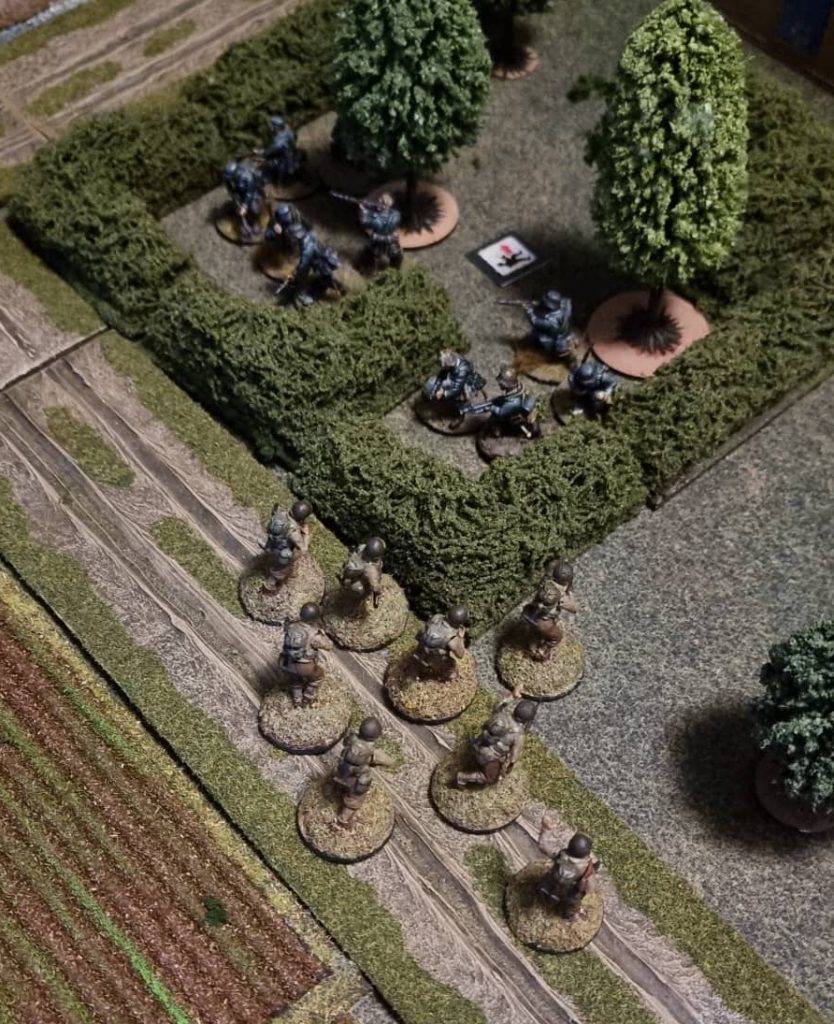 Lohse’s men are somewhat surprised, but the odds still are against the attackers. All of the US infantrymen are killed in the bloody mêlée, but so is Obergefreiter Lohse! He is killed outright, while another Grenadier is wounded as well.

Unterfeldwebel Zausel feels obliged to take command of the remaining men and keeps them a coherend fighting unit. He orders them to immediately open fire at the enemy again. This earns them a Sherman tank shell in return. Not to much effect luckily, but it proves to be too much for one of the young grenadiers who digs himself into a hole and refuses to carry out any further orders.

At the other flank the third US section (led by the lieutenant) get close to the walled garden, but OGefr. Stanischewski’s section fend them off.

At this point the US Force Morale plummets to 1. To avoid disaster the lieutenant orders US forces to retreat.

Getting to play on a new map was a nice change. The Americans are aware of the off-table Marders now, but the first surprise shot worked very well. In general Col.Bourne used Overwatch and Covering Fire a lot more this time, and it’s rather irritating. Defending the tall obstacles and buildings is pretty much the same as on the first map, and I was lucky enough to roll three double-phases in total, which certainly helps moving up to the hedges/windows, firing and pulling back out of LOS again. Meanwhile Col.Bourne had command rolls like these: 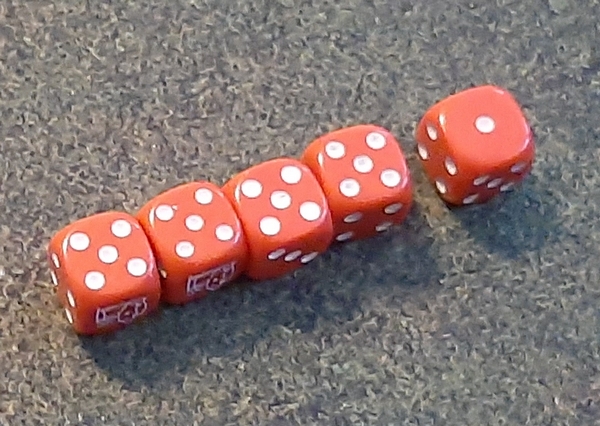 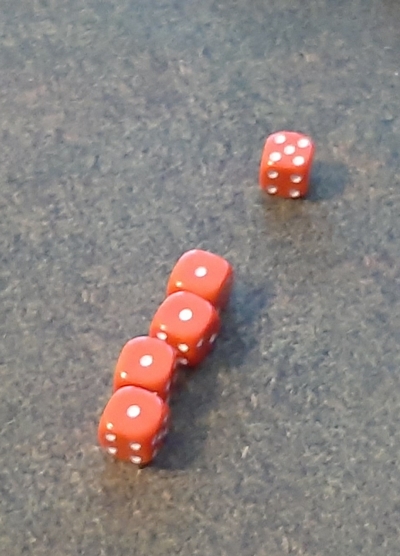 The close combat attack surprised me I have to say, but it certainly wasn’t the worst idea in a pretty unlucky situation. And it hit me where it hurts – my leaders.

In the end I had lost two men and OGefr. Lohse, the US side lost roughly 22 men. My losses recovered nicely, except for Lohse of course, who is as dead as a dead Dodo and I need for a replacement Junior Leader to step up. 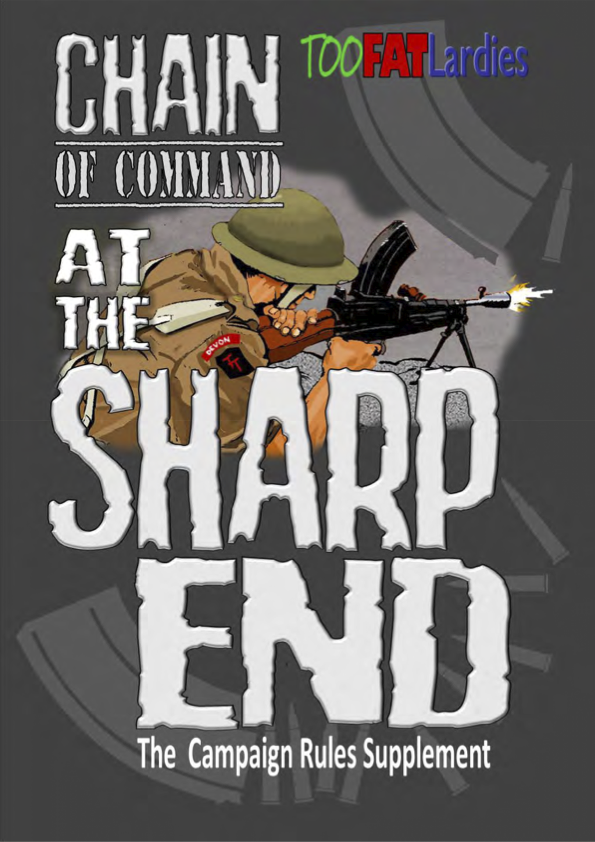 Unfazed by these things, the men’s opinion of Unterfeldwebel Zausel improves by 1 point and Zausel’s outlook on the wohle situation changes from Cheerful to Secure. As comms with HQ still are dead there is no change in Zausel’s superiors’ opinion of him (that he knows of).

Right as we got comfortable in our new homestead the enemy launched their first attack. The Hinterhalt of the self-propelled guns we linked up with worked nicely and deterred enemy tanks from attacking directly. Unfortunately OG Lohse was killed when holding his position against a mad attack the enemy carried out as a last hurrah. The Americans seem to be determined, but they have to go through” 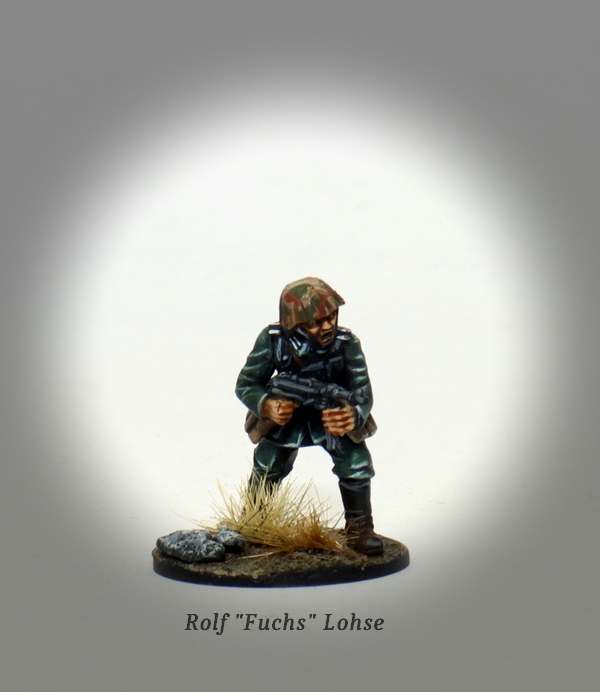 Despite the bitter loss of an NCO it was a success overall. An interesting new map, and last but not least it was nice playing again.

I hope that you enjoyed this battle report, make sure to have a look at Col.Bourne’s take on the events on his blog. Until then, thanks for reading and see you soon!

Hey, hey. A few days ago Cpt.Shandy came over for a spontaneous game of Song of Drums and Shakos! Here's the AAR: