Heyhey, just a quick one – few days ago, Cpt.Shandy came over for a game of Song of Drums and Shakos.

It’s been over 2 years since my last game of Song of Drums and Shakos. Back then it was a solo test game for the rules and basis of my review thereof. 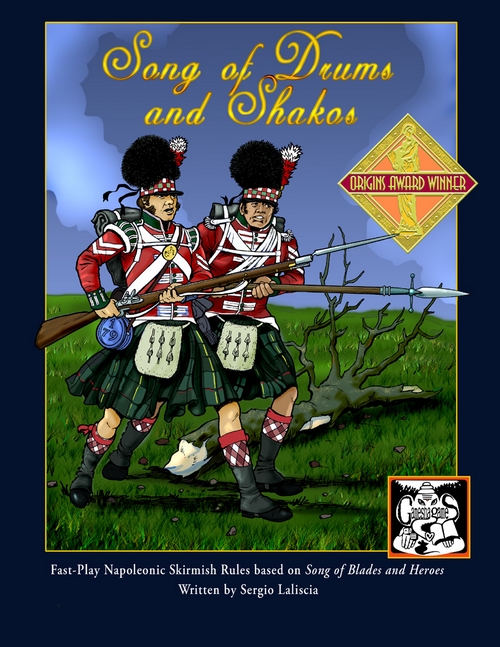 It’s the 19th April 1809, an Austrian army is sent into the Duchy of Warsaw to take Warsaw in a swift strike and then turn against Saxony to support the attack against Napoleon’s German allies. Archduke Ferdinand’s VII Corps advances towards Warsaw, Prince Poniatewski’s quickly levied army (backed by a Saxon corps) of 14,000 sit in their excellent position along Utrata river crossings. 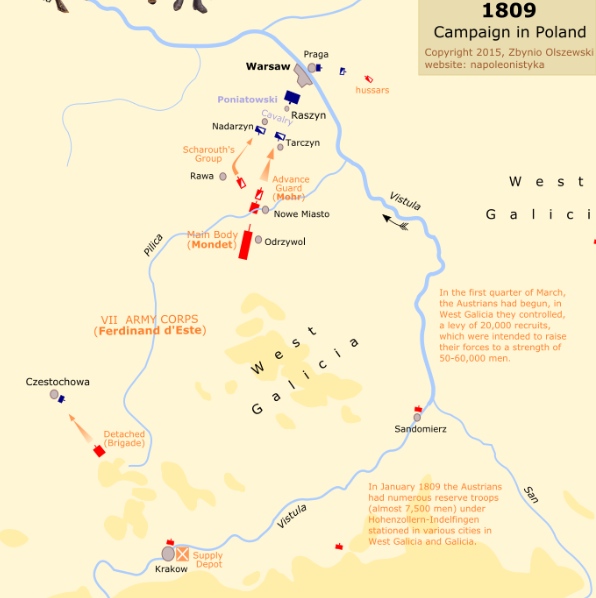 As the Austrian army halts one more time before making ready for battle, Archduke Ferdinand sends an avant-garde under General-Major Freiherr von Mohr. Their task is to find a concealed route to march the bulk of Ferdinand’s infantry and surprise the Polish army. The road proves to be concealed, but in a bad state. After some light skirmishing between von Mohr’s and Polish cavalry the Austrian Avant-Garde hangs back to await further orders.

The whole game was pretty improvised. We took a scenario from the More Drums and Shakos e-book (with additional rules for civilians, traits, more wepaons, more scenarios and more stats for nations involved. Simply More Drums and Shakos!) called “Under Fire!” and added a little extra objectives. So we ended up with this:

Von Mohr’s corps is sitting in the vicinity of the town of Janezevice, near an inn called “Zur Bequemlichkeit”. The Austrians have a spy (covering as a priest) in town whom they need to link up with immediately. Problem is that he can’t get out at the moment due to the presence of Polish troops nearby. A small command is put together to search for the spy and get him into safety. The Polish side catch wind of this operation, but can’t spare more than a handful of men themselves to take care of the situation. 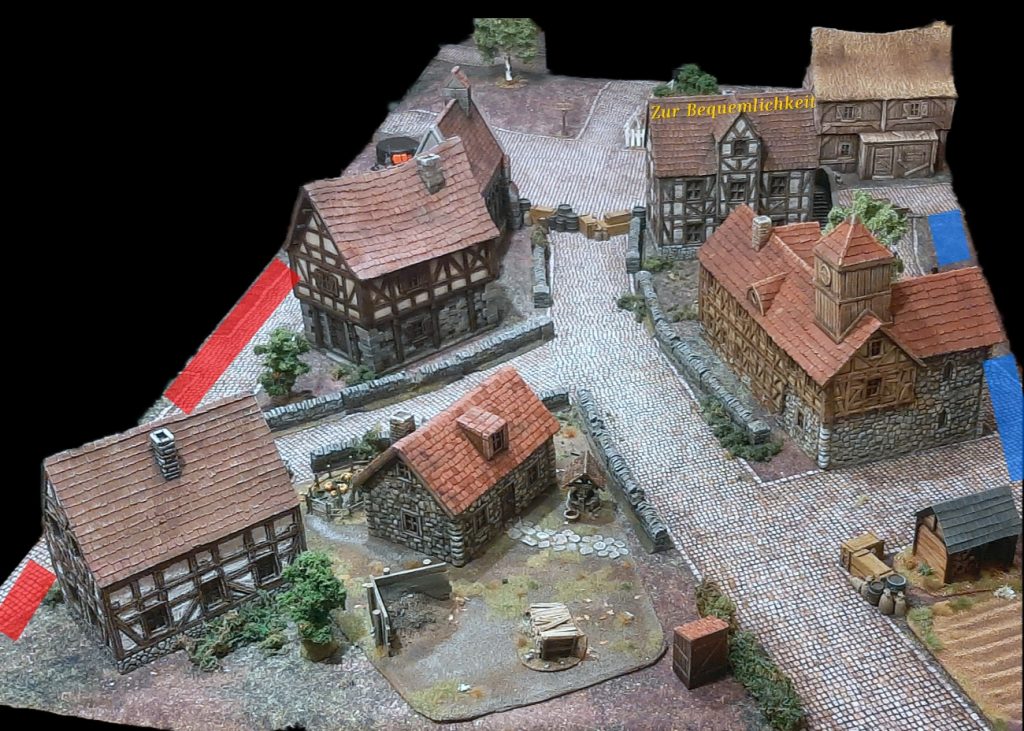 The Polish force deploys along the red table edge, the Austrians along the blue edge. The actual gaming area only reaches up to the barricades; roughly 85x100cm. The spy hides in any of the buildings (except for the one in the lower left corner in the picture, the outhouse at the bottom centre, and the wood shed in the bottom right). To search for him, a model has to move up to the building’s door, spend an action ‘knocking’ and roll a D6. First building that gets checked will contain the spy on a 6+, second bulding which gets checked will reveal the spy on a 5+ and so on.

Otherwise the regular rules for winning and losing apply.

Instead of putting up with points we got standard forces from the SoDS rulebook and modified them a tiny bit. 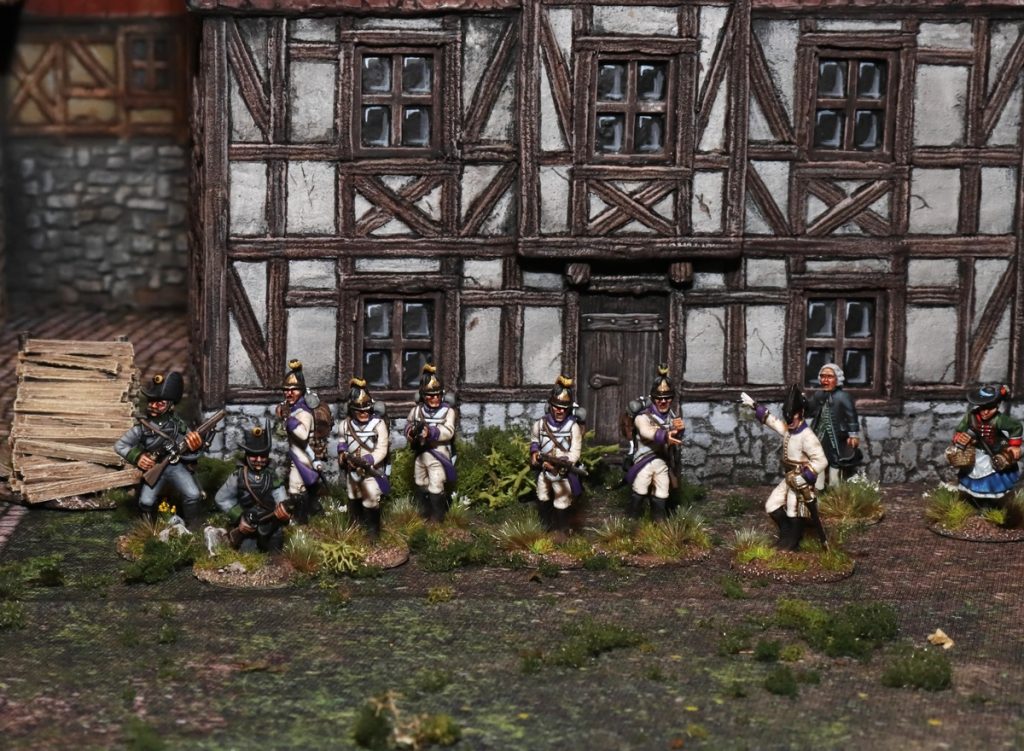 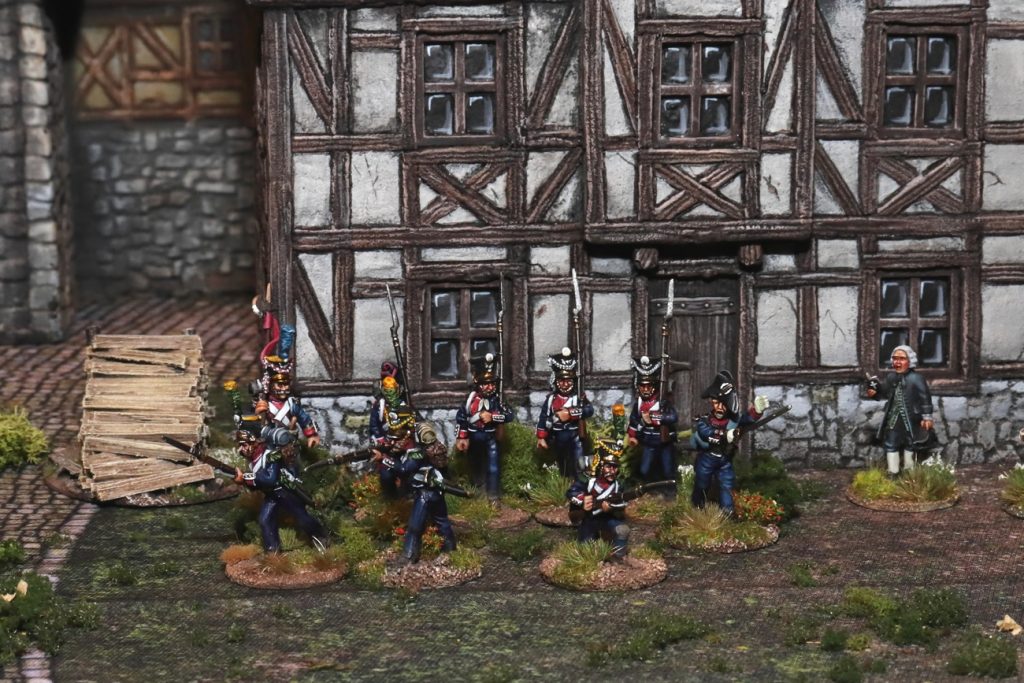 We deploy in rather similar manners (pretty much concealed, because we were both sitting down and couldn’t see across the table due to the buildings) – the officer with the four line infantry, all base-to-base to allow for group actions/volley fire.

The Austrians choose a clearer path to get into position to overlook the main road. 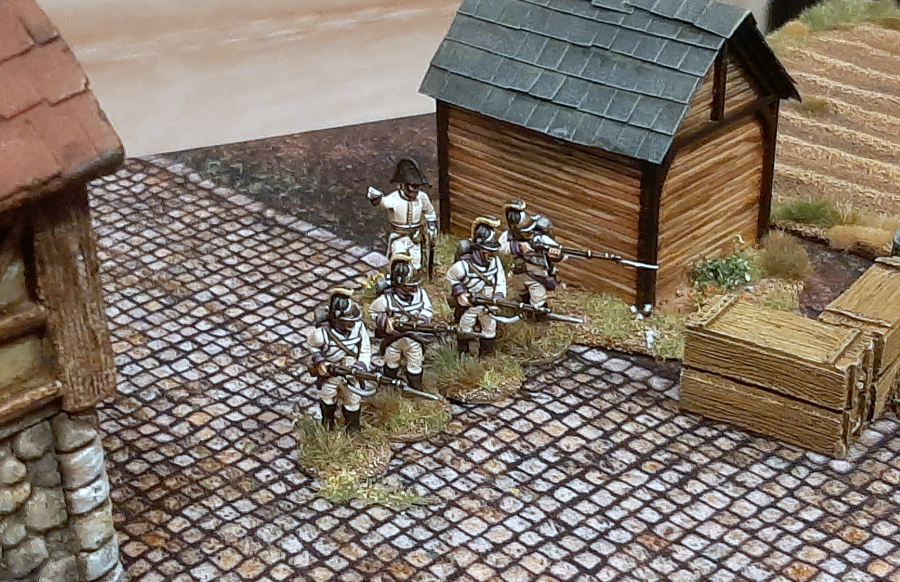 …while the Porucznik Kiciński chooses a covered approach across somebody’s backyard. 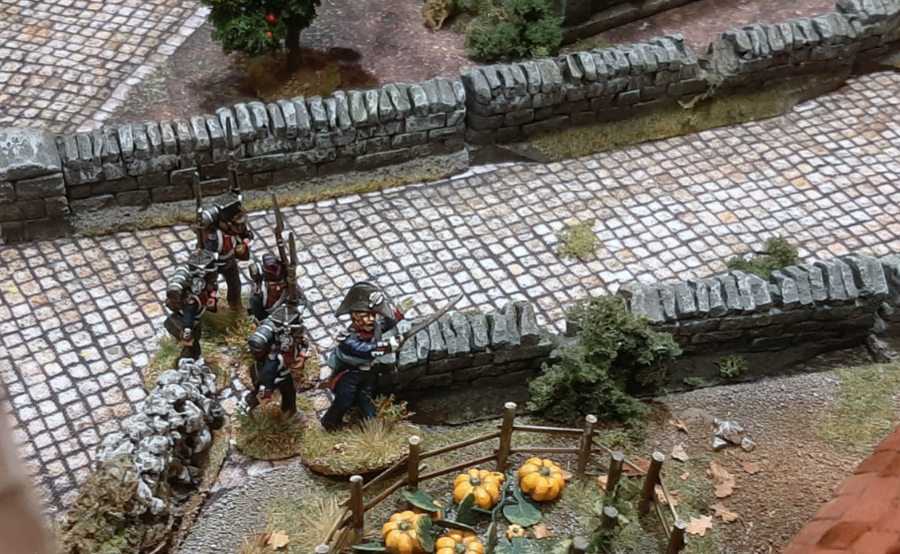 Even a body of just four has some trouble passing the narrow gate in the wall. All of a sudden they hear what sounds like thunder. Few seconds later the men realize that it must have been cannon fire as the building next to them is hit and catches fire! One of them is hit by some flying debris, but is unharmed. 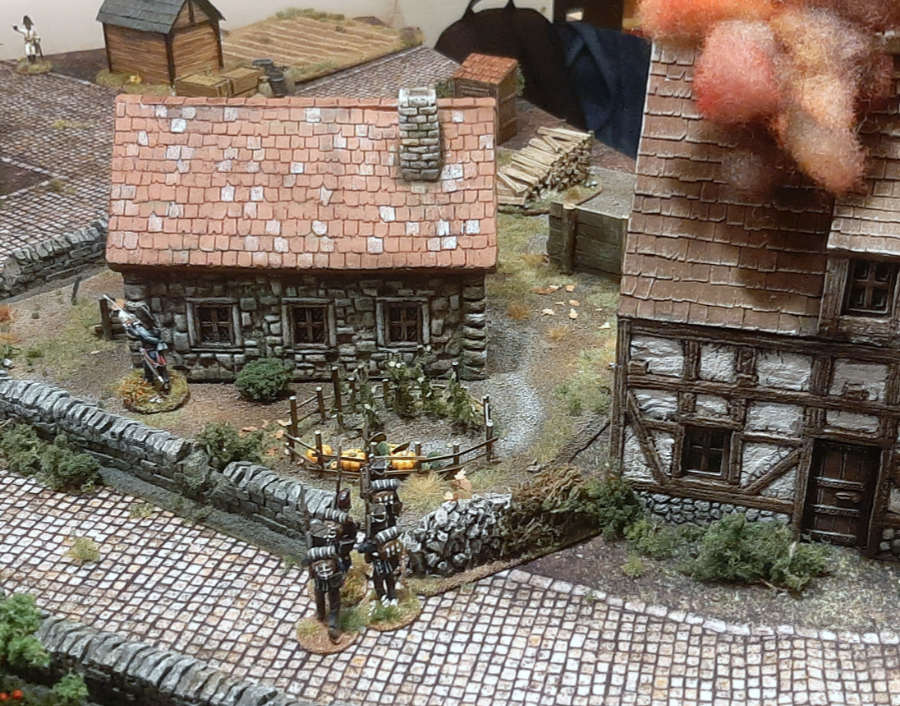 That’s where the ‘Under Fire!’ part of the scenario kicks in. Some artillery battery fires two salvos at random buildings on the table.

The Polish NCO and the Voltigeurs are stuck behind the church. After a while they finally find a way in, but the church is abandoned.

Meanwhile the Jägers and the Austrian NCO advance in front of “Zur Bequemlichkeit” inn. On the way the NCO sends the Jägers forward to stop by a wine sales lady for a drink and a chat. 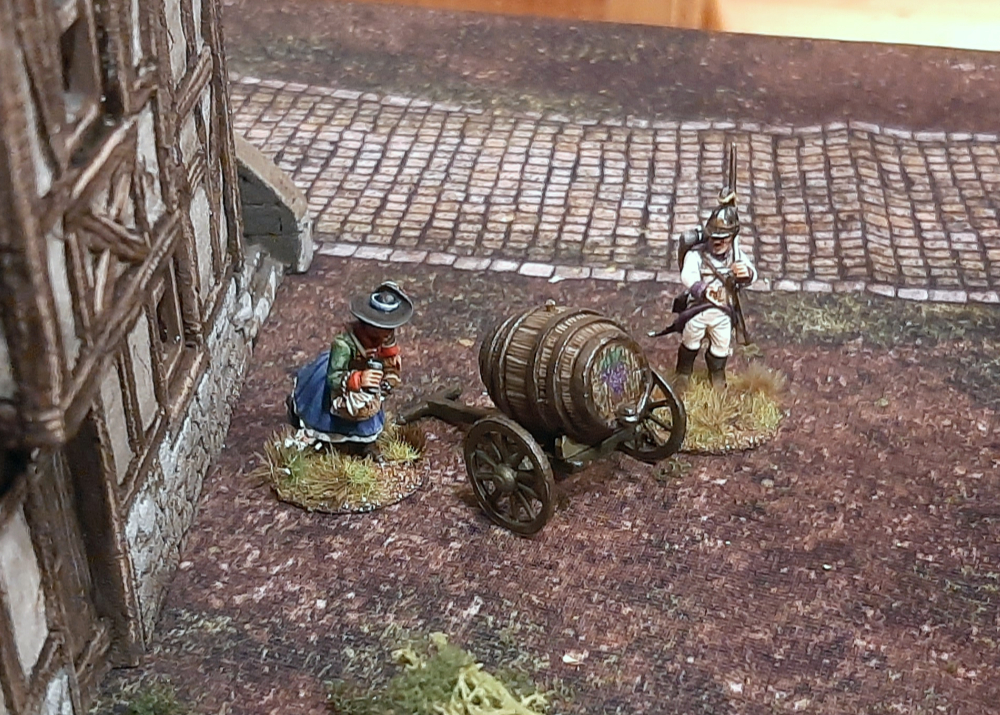 Then he catches up to his men only to send one of them back to check the inn for the spy. 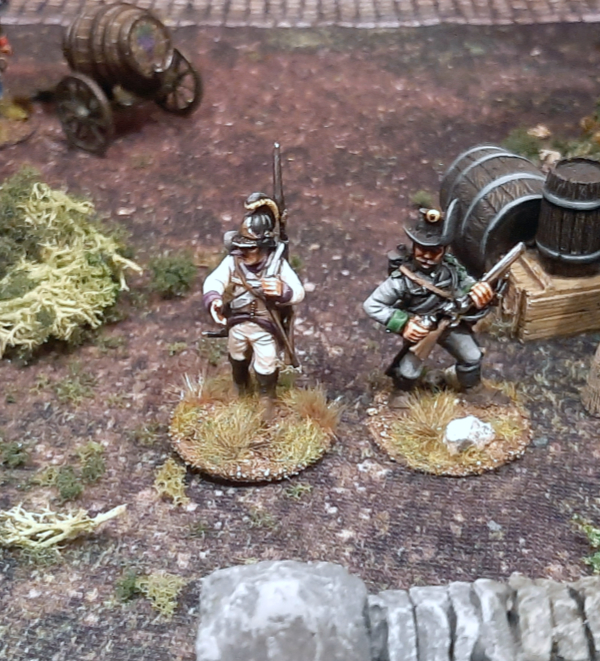 …and there he is! Right in the inn. The Jäger pulls the spy away from the bar and places him under the care of the wine-seller outside before he heads back to the NCO to report in. 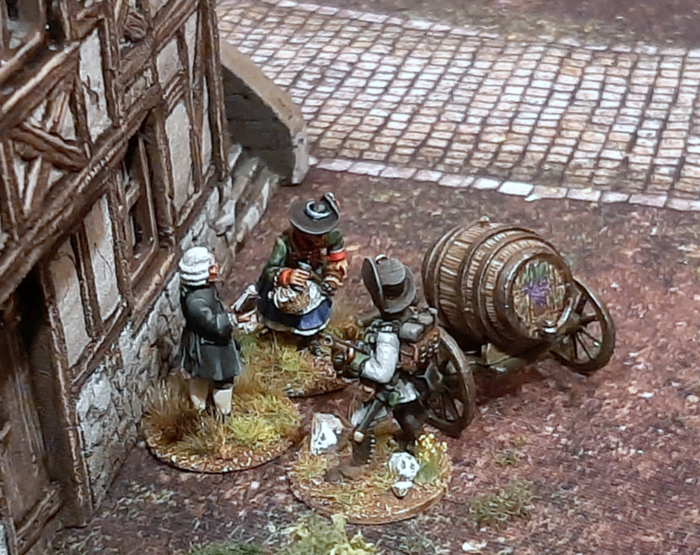 Meanwhile the other Jäger takes position behind a garden wall and starts taking care of business. He opens fire at the Polish officer, but misses. For his next shot he chooses the Polish NCO right across the road as a target. 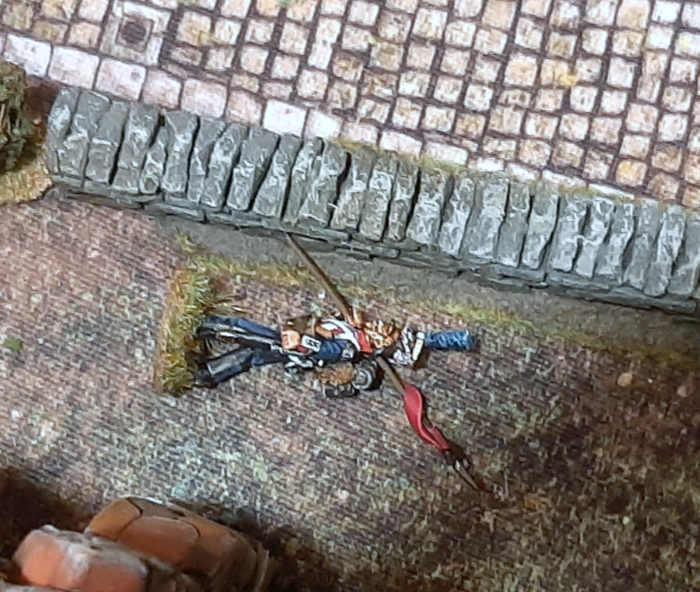 No serious harm done, but Grabowski is forced to hit the ground for cover.

Another rumble far off, this time the abbey right in front of “Zur Bequemlichkeit” inn is hit and goes up in flames. They either stored very sharp brandy in there or the building acted as a powder magazine. 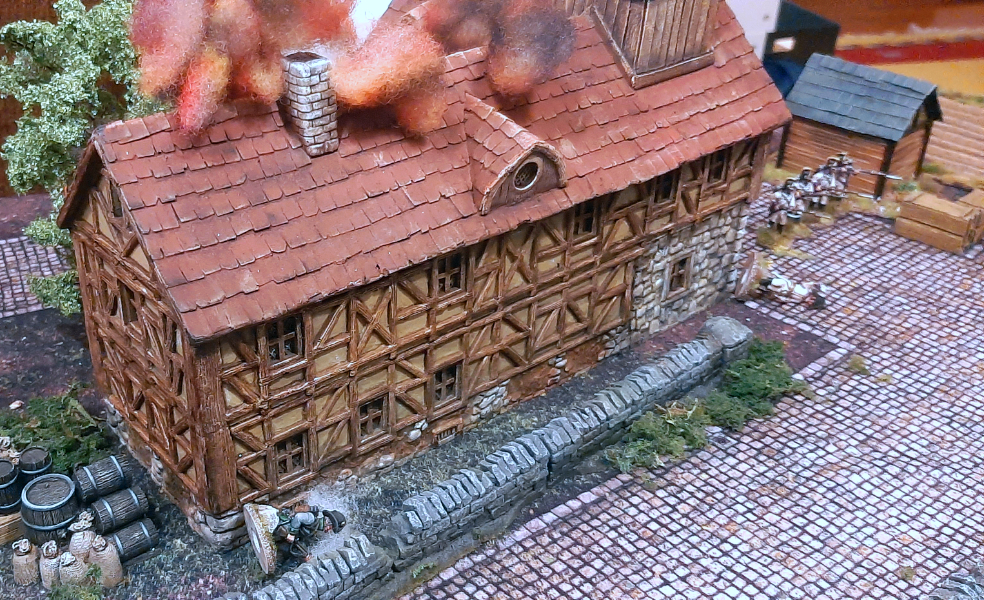 The Korporal Dobos, the Austrian NCO who just arrived with the Jäger behind the wall, is killed instantly. The Jäger and the Eynhuff are thrown to the ground by the blast. 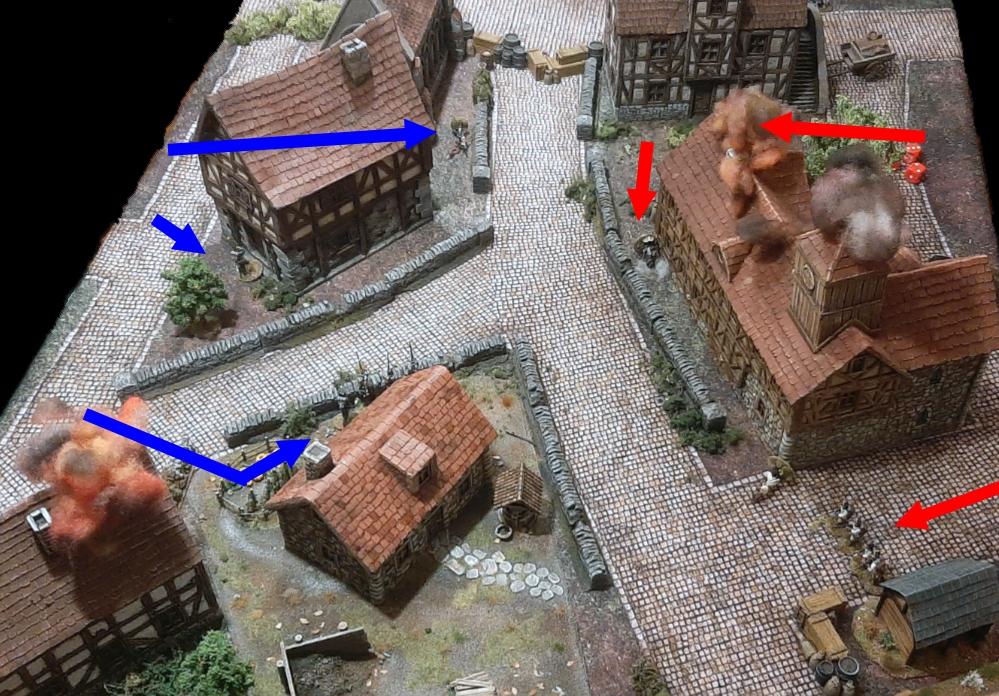 From top left to bottom right: Polish NCO Grabowski advanced up to the wall, took fire and threw himself on the ground. Technically he’s got three voltigeurs with him, but they don’t seem to be keen to get into the fight and instead sit around, pretending to be looking for spies or pies or what ever. Across the road the Jägers were more active. One finding the spy in the inn, the other one firing at Polish leaders before he gets thrown down by the artillery salvo.

Leutnant Eynhuff gets up, leaves his line behind for a bit and decides to look after the Jäger, who seems to do all the fighting (on either side!) for now. As the Polish line infantry get into position, their officer fires his pistol towards the Austrian Jäger. More a sign of defiance than anything else. 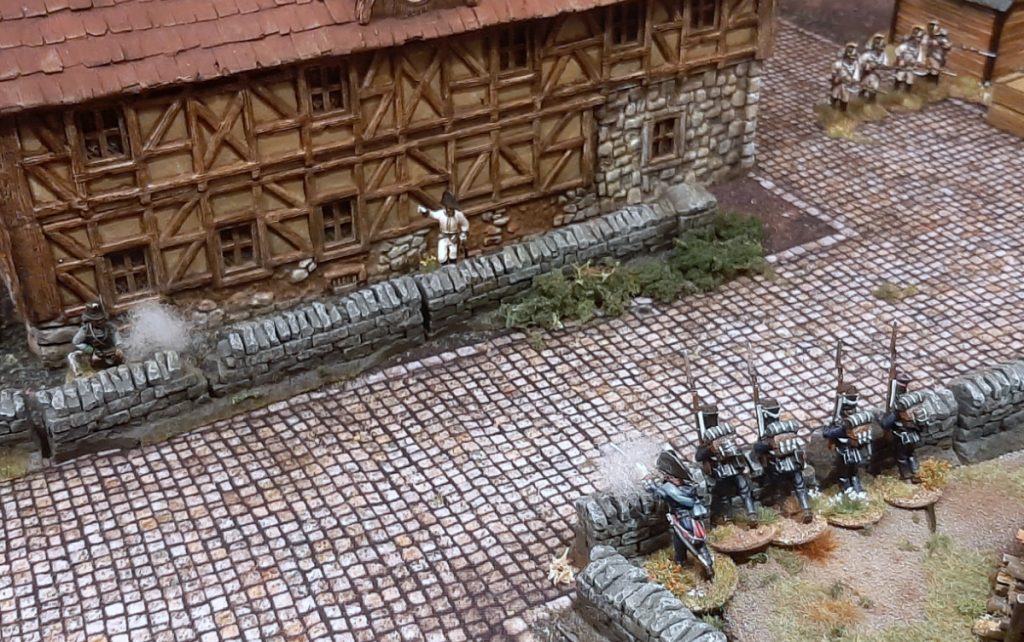 Finally, the Polish infantry get into position behind the wall, the officer gives the order to fire a salvo at the Austrian officer and the man goes down. 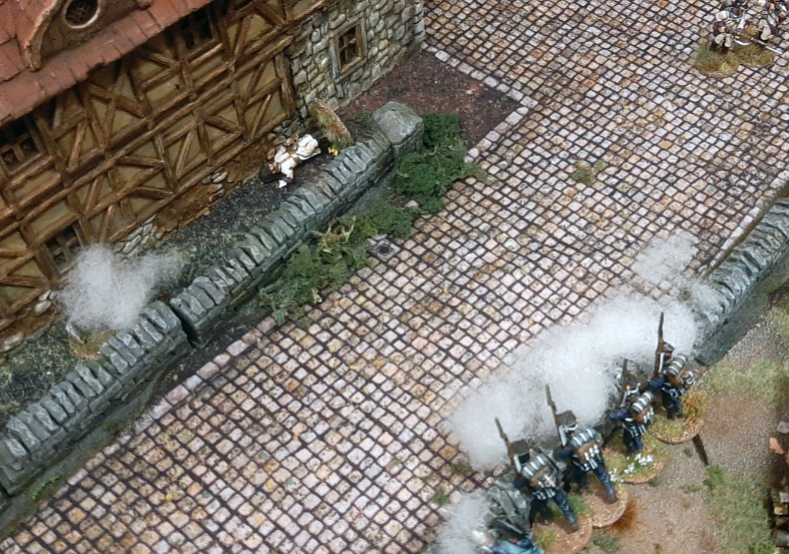 This prompts the Austrian force to fall apart. Two men fleeing off the table instantly, two more well on their way. The Jäger who got the spy flees as well.

At this point the game is pretty much decided, but Cpt.Shandy was willing to go on for a bit more so we see some close combat. Seeing the enemy on the run, Grabowski jumps up and makes his way across the main road to grab the spy. 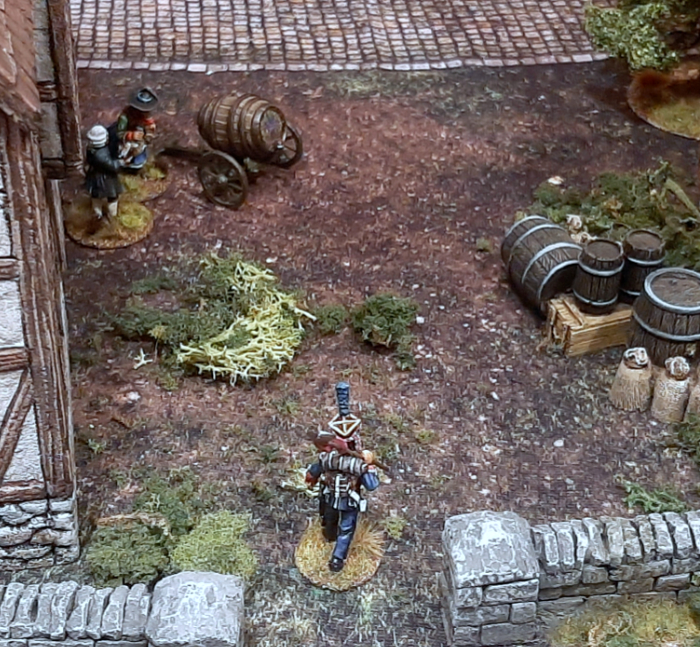 The one remaining Jäger dashes over, dodges a musket ball from across the road (the one thing the Polish Voltigeurs did all game) and tackles the NCO to the ground. 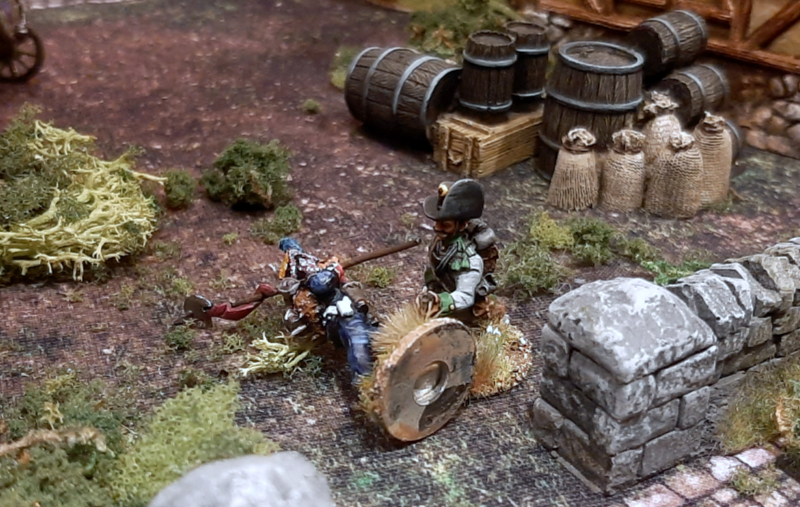 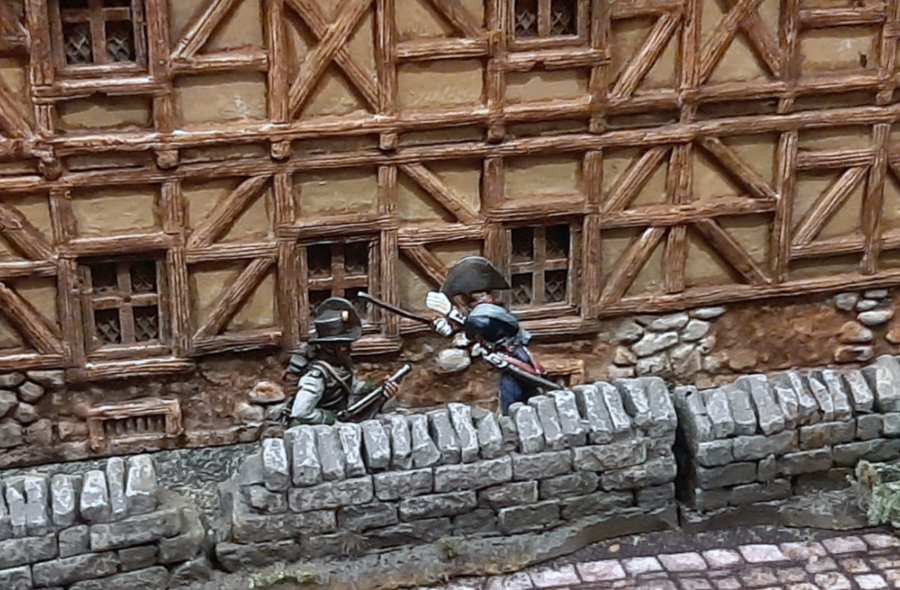 …but this time it doesn’t go as well for the Jäger. 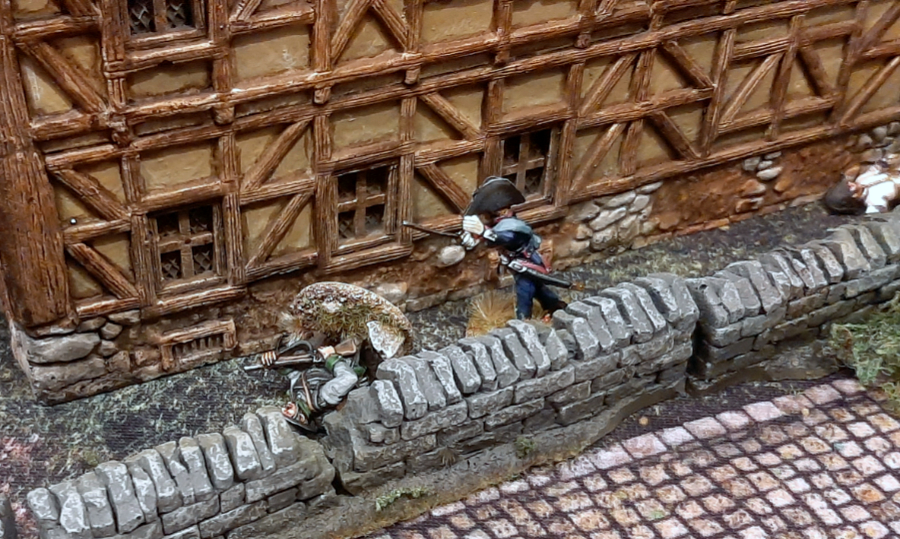 The two remaining Austrian line infantrymen try their best to even the score by engaging isolated Polish figures (one outmaneuvering the Polish line to fire in their flank, but it amounts to very little effect). The other line infantryman runs for the spy to get him off the table. But Grabowski is back on his feet once more and this time he wins the close combat. 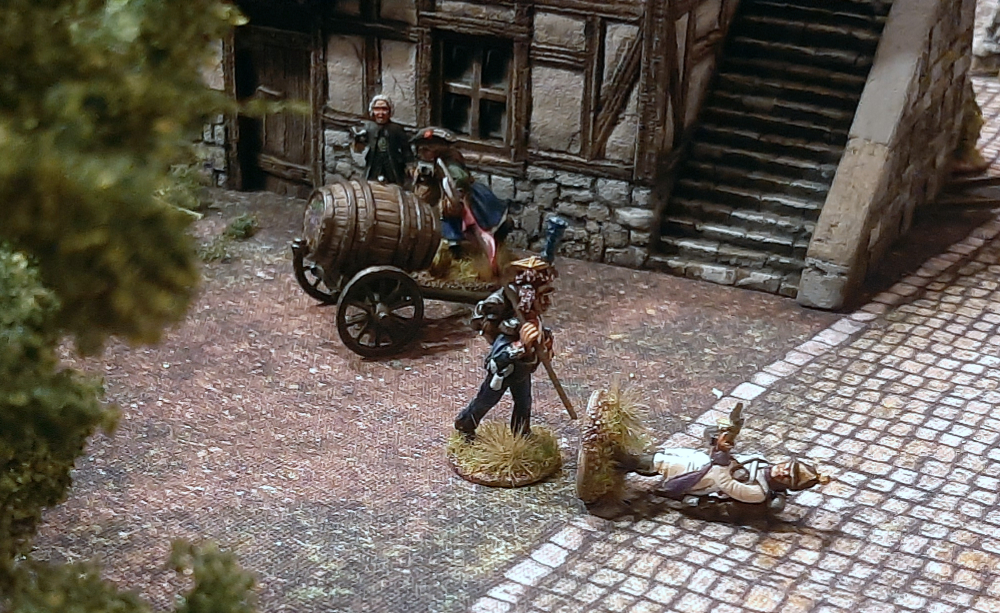 At this point there’s no denying that the game is over. The Polish force takes the field (and the spy), but Austrian Jäger#2 was passed maps from the spy, so it’s nothing more than a Polish Minor Victory.

Aye, good game. There’s a lot of fun stuff you can do with these rules and the occasional tiny-scale skirmish is good fun.

Shame I didn’t have time to work out a more solid scenario; the whole spy thing wasn’t really ruled properly. 😀 I think there’s a sort of victory points system somewhere in Song of Drums and Shakos, so that may have worked, but having the side who gets the spy off table win would make for a very short and entirely luck-based game. Not that I’m averse to luck playing a game, but we didn’t want that. So we made up a wobbly ruling about Major and Minor Victories based on whether or not the Austrians would rendez-vous with the spy. 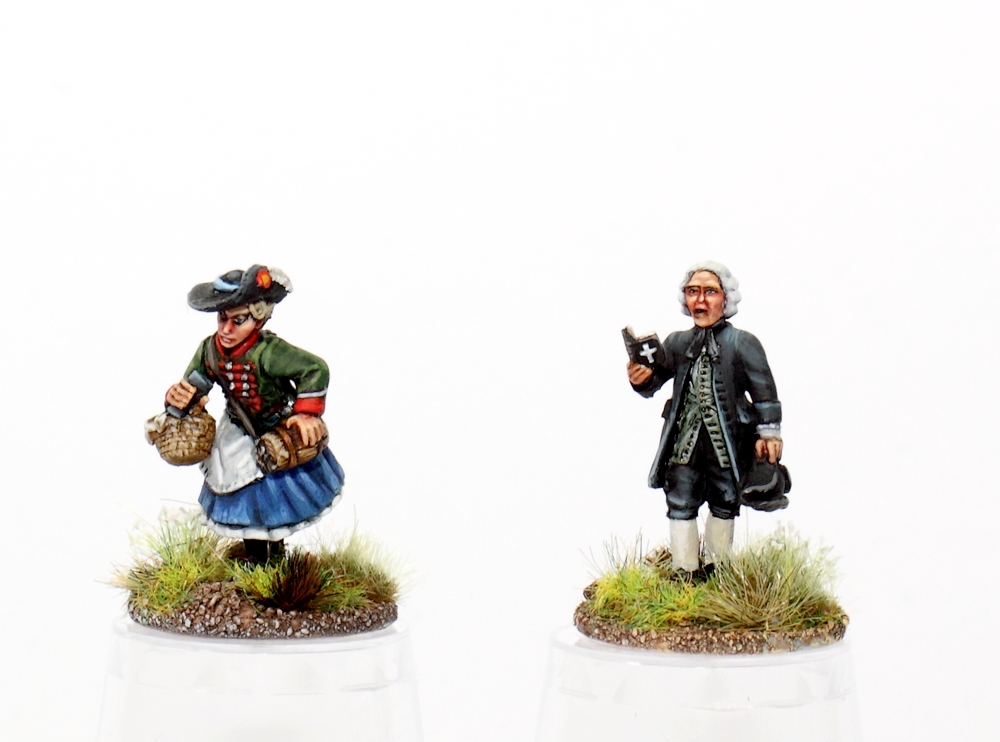 It was nice to finally get my 28mm Poles on the table. I painted a Sharp Practice force (all lovely Murawski miniatures) 2 years ago, but so far they hadn’t seen any action. The Austrians had their debut in 2020 in the first game of Song of Drums and Shakos. 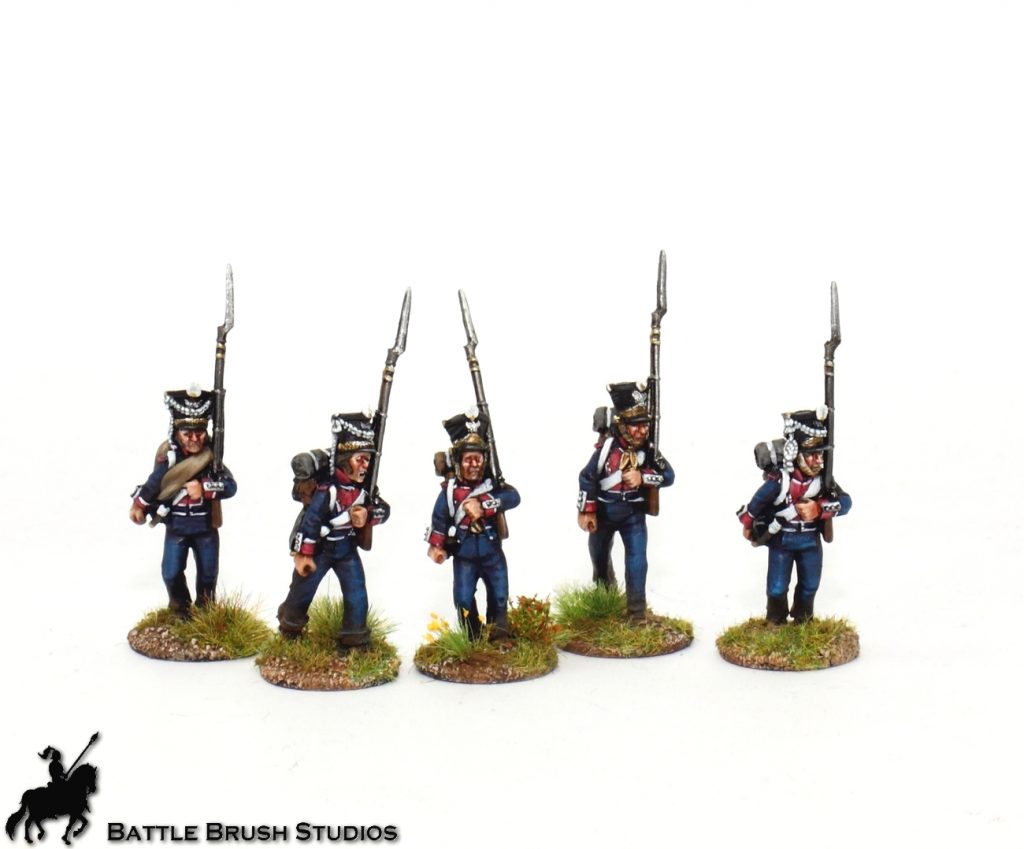 Well, that was a quick and easy game. Good fun. I hope to get the Polish leaders done as well and get them on the table for a Sharp Practice game as well in the near future. Hope you enjoyed this little battle report!

2 thoughts on “Song of Drums and Shakos AAR”