Heyhey, here we go again with another rules review. This time I’d like to present you with AR:SE for your enjoyment.

It’s October, so ’tis the season of looking up fun, multi-player zombie rules, isn’t it. Due to lack of players (courtesy of the pandemic), a bit of solo capabilities in those rules are welcome as well. So I dug up these rules from my hard drive, dusted them off, because they’ve been sitting on there for several years now. It’s Akula’s Rules: Skirmish Edition (AR:SE). Quick, simple rules for survivors vs. zombies in a modern setting.

Well, it’s PDF-only. I printed it, but at 2 pages it would be a bit of overkill having this bound. Overall it looks more like a quick reference sheet, with a well arranged layout to give you an overview of all the rules. Come to think of it, this review probably will have a higher word count than the rules themselves, which is a bit of a unique situation.

How does it work then?

I’m not quite sure if going through the mechanics one by one is that important in this case, because the rules can be read quicker than me describing them in a wordy fashion. Oh well. 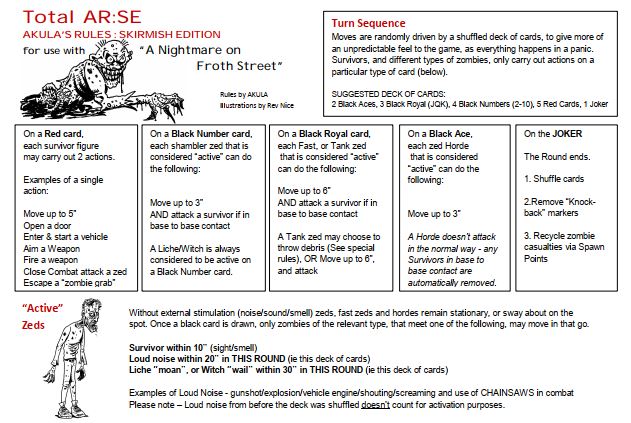 Figure activation is card-based. A simple deck of playing cards will do. Cards are drawn one after another, on each card either a certain type of zombies (the game has Shambler, Fast and Tank zombies, plus Liche/Witch and ‘Zed Hordes’) or the survivors are activated. There are several cards of each kind in the deck, which gives it a good portion of unpredictability. This is furthered by the presence of a Round End card, so you can’t quite predict what will happen from the cards which have been drawn already.

Zombie behavior upon activation is simple and straight-forward (unsurprisingly), based on noise and line of sight. Fast zombies move a bit faster and get a combat bonus when charging, Tanks are harder to kill and may throw debris (so they are a pain at any range), Hordes move slow, but may ‘spawn’ more zombies and just tear survivors apart instantly upon contact, Liches/Witches help activate zombies by means of wails and moans. 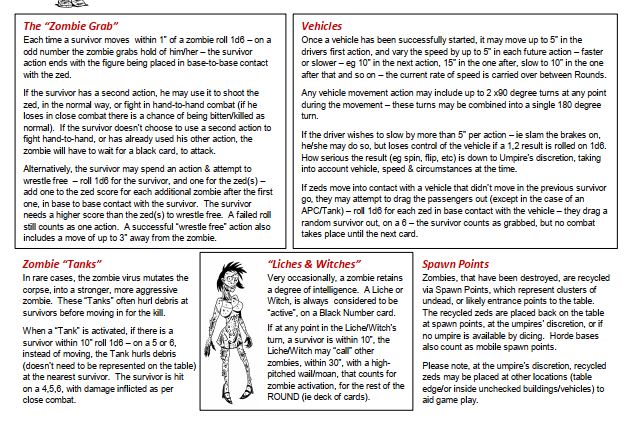 Survivors are allowed two actions per activation, which can be used to move, fire a ranged weapon, fight in close combat, and other things, depending on the situation.

There even are surprisingly elaborate-but-compact vehicle rules (see that, Last Days?).

Spawn Points are set spots from which more zombies pour onto the table. The number of these spawn points, the number of zombies spawned per turn, and so on is all up to the umpire of the game, so it will take some experience getting the positioning of the spawn points and number of zombies right. I think this is a central matter in this game to ensure it’s not too hard or too easy on the survivors.

Be careful when running around, guns a-blazing – the noise will attract zombies at pretty far distances! 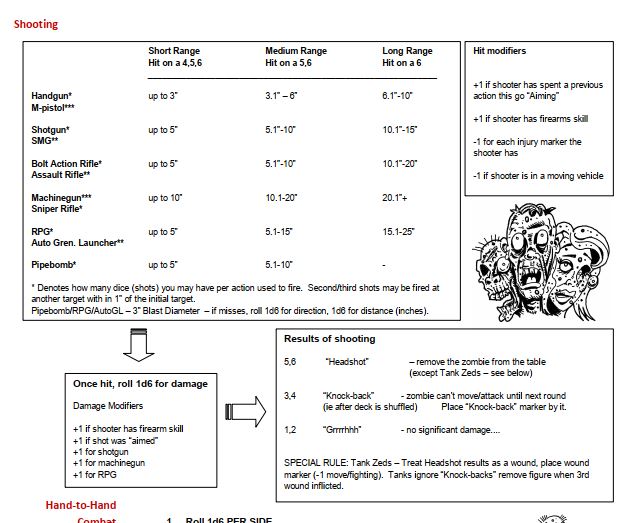 Shooting rules are straightforward as well (I thin use this word a lot in this review). The list of weapons is to be taken as examples. Based on these, it’ll be easy modelling pretty much any ranged weapon in this game. The main differences between guns in this game is range bands. Weapons with an extra punch to them receive a damage bonus. Hits may result in a ‘headshot’ (which kills the zombie, as tradition dictates), a ‘knock-back’, which keeps the zombie from acting until the next round or no significant damage.

There are no rules for ammunition or reloading, but could be added without much trouble if you want. 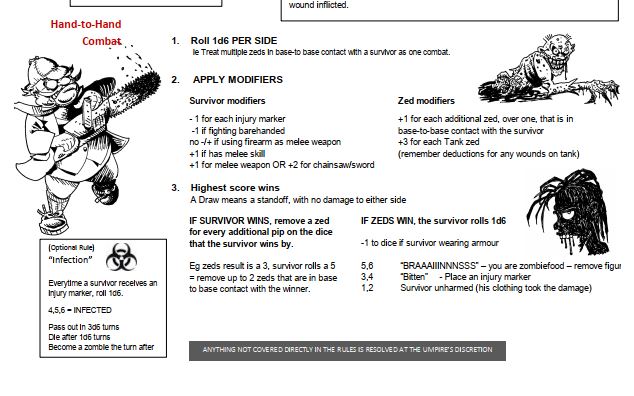 Other than with ranged attacks, a survivor succeeding in close combat will ouright kill one or even more zombies. The trade-off for this of course is a the fact that the survivor might be eaten as a close combat result.

Wounds on survivors will reduce their movement, close combat and firing capabilities for the rest of the game (or until healed). There is an optional rule for survivors getting infected with the zombie virus and ‘turning’ after a while.

I got the rules printed and decided to give them a spontaneous test game.

After their latest adventure a band of survivors travel towards a military base, hoping to find help or at least shelter and supplies there. Suddenly a flare shoots up into the afternoon sky from a nearby forest. Maybe someone needs our help!

Our heroes cross a little bridge and off into the woods. A few hundred meters off the position they suspect the flare was shot from they spot an abandoned construction site. Among the debris there’s a little makeshift campsite. Maybe this is where the call for help came from?

Driving up there directly is made impossible by a knocked over tree, which blocks the road. Seems like the five survivors have to get there by foot. The truck’s doors open and we meet our heroes:

Kim, who’s got the most experience in such situations and thus is the quasi-leader of the bunch, decides for the group to take the slightly long right way and then go on to the tents, avoiding the deeper forest by the white car and the doors of the very suspicious looking Porta-Potties. Years ago she learned to better avoid those the hard way.

There are some zombies in their way, but Kim’s assault rifle and Chad’s shotgun make short work of those. This of course comes at the price of stealthiness, soon the noise draws in several more zombies. Our heroes (sans Kim, who hung back) find themselves surrounded and in bloody melee! 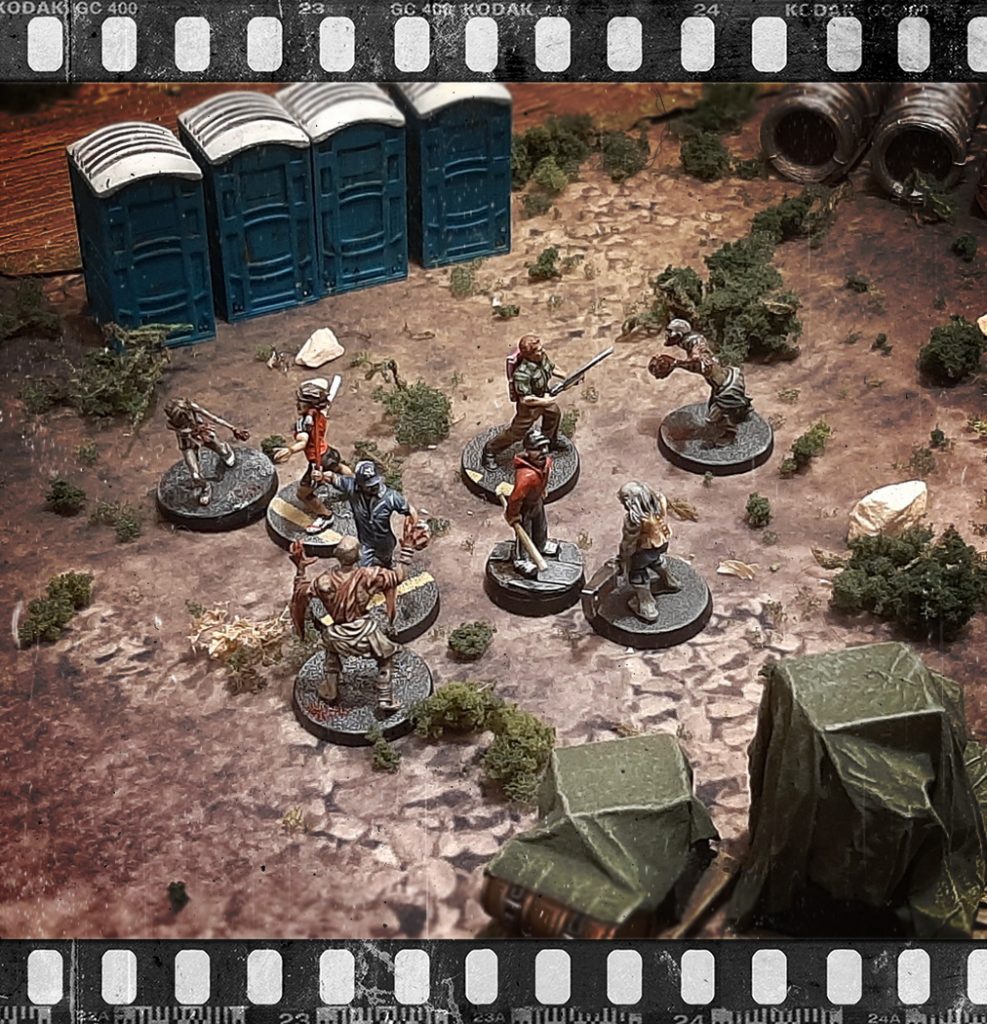 The zombies are all over them so suddenly that Kim can’t get a good shot in. Biff makes short work of the zombie right in front of him. He moves over to help Mr.Beasley, but too late. Beasley’s crowbar is buried deep in the chest of the zombie, but the creature is unimpressed and overpowers the car repairman. Cytherinne (that’s with a C-Y-T-H and a double N!) gets a nasty scratch on her arm. Seems like  a tennis racket isn’t the best weapon to fend off the undead.

No time for mourning for their comrade. Chad moves on to keep the zombies on the road in check while Cytherinne hastily searches some boxes for supplies. Just as she strikes gold (in the shape of a first aid kit) another zombie attacks her and she takes a bite to the cheek. Cytherinne manages to push the creature away, runs off, and Chad takes it down with his shotgun: 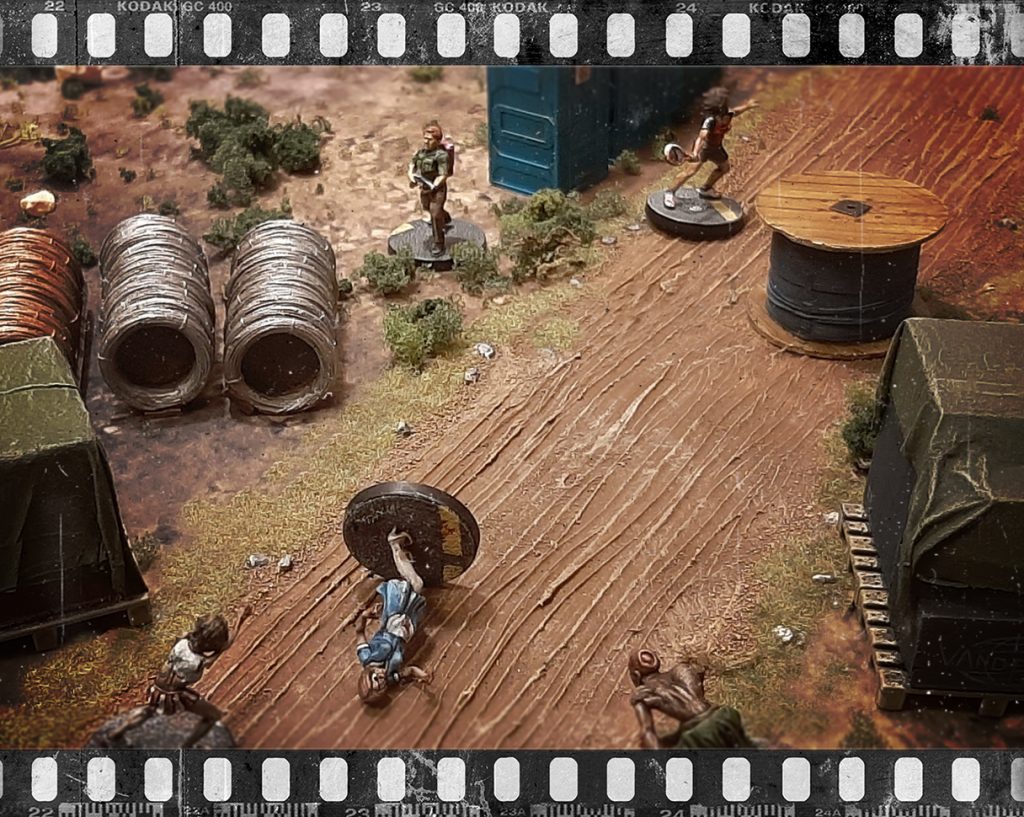 While the others make a lot of noise on the road, Biff, after searching some boxes, but not finding anything, sneaks towards the little campsite…

He sneaks toward the first tent and zips it open.

Luckily the reflex of whaking things in the head is deeply rooted in Biff’s character and after a split second the zombie goes down. Biff’s belief in tents is shaken though. A (more cautious) inspection of the second tent confirms this. It’s empty.

More and more zombies start piling in. No more time to investigate; Biff’s gotta get out.

Chad draws the same conclusion. He calls out for Cytherinne, who was just passing the Porta-Potties last time he saw her. All he hears is a sharp shriek as a potty door swings open and Cytherinne is pulled into the plastic box. There is a very short struggle inside, followed by munching sounds. Chad can’t do a thing and has to run off as the undead close in. 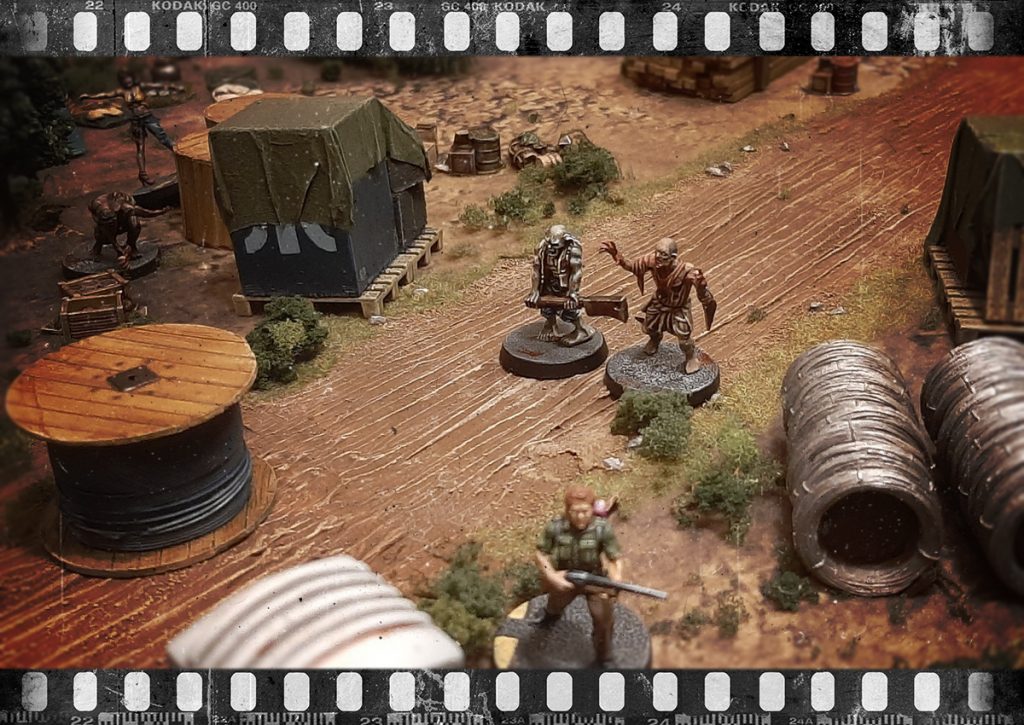 Chad decides to turn around and open fire at the zombies. A bad idea, as he is a legendarily bad shot. Soon he finds himself engaged in combat: 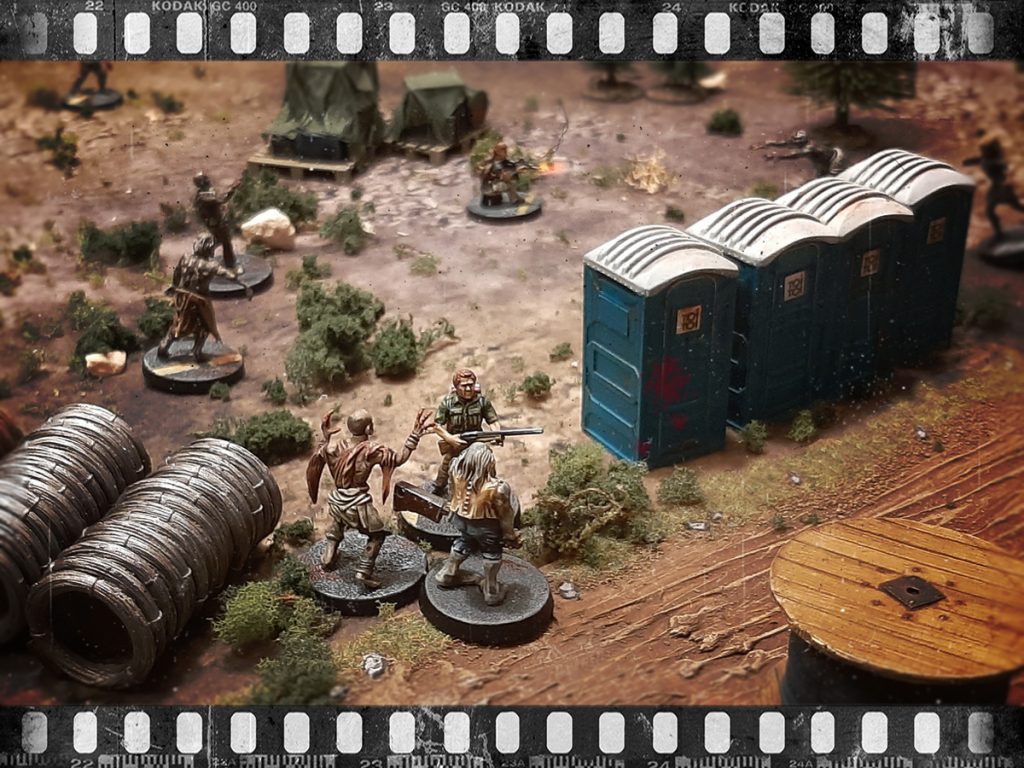 In the centre-right you can see the porta-potty into which the unlucky Cytherinne disappeared. Right in the middle of the picture there’s Chad struggling to kill the zombies in close combat. Eventually he prevails though. In the back you can see what Kim is up to in the mean time… 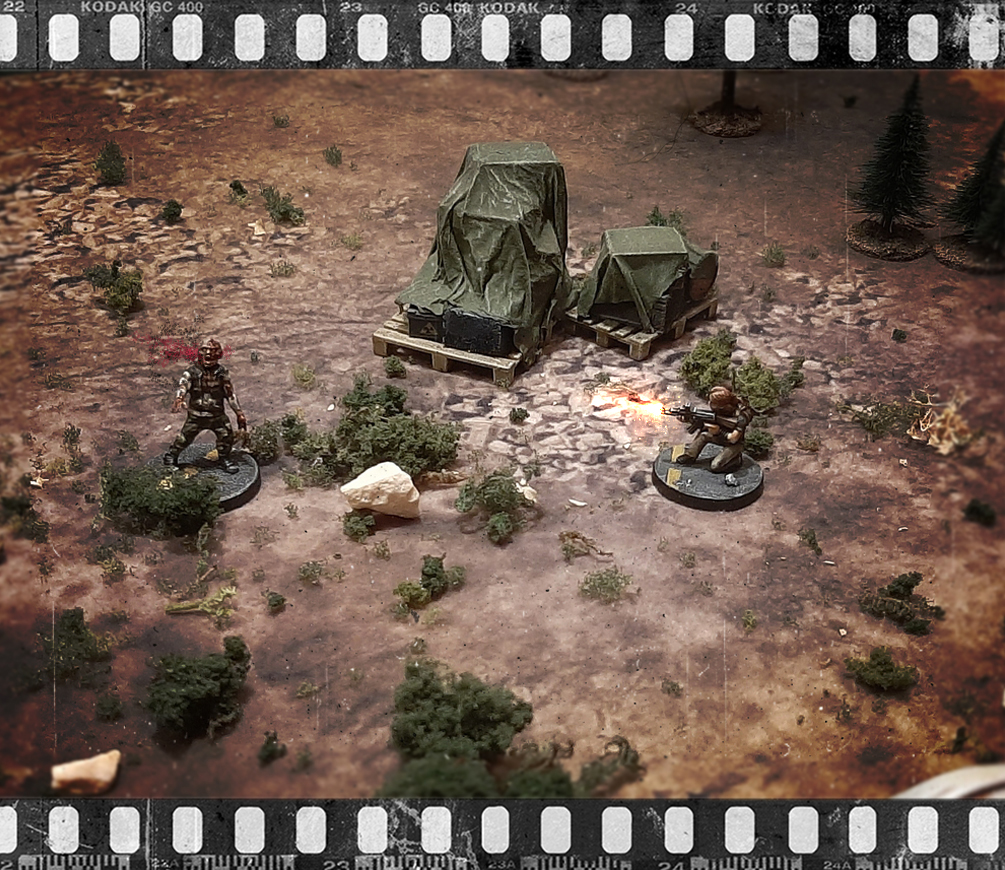 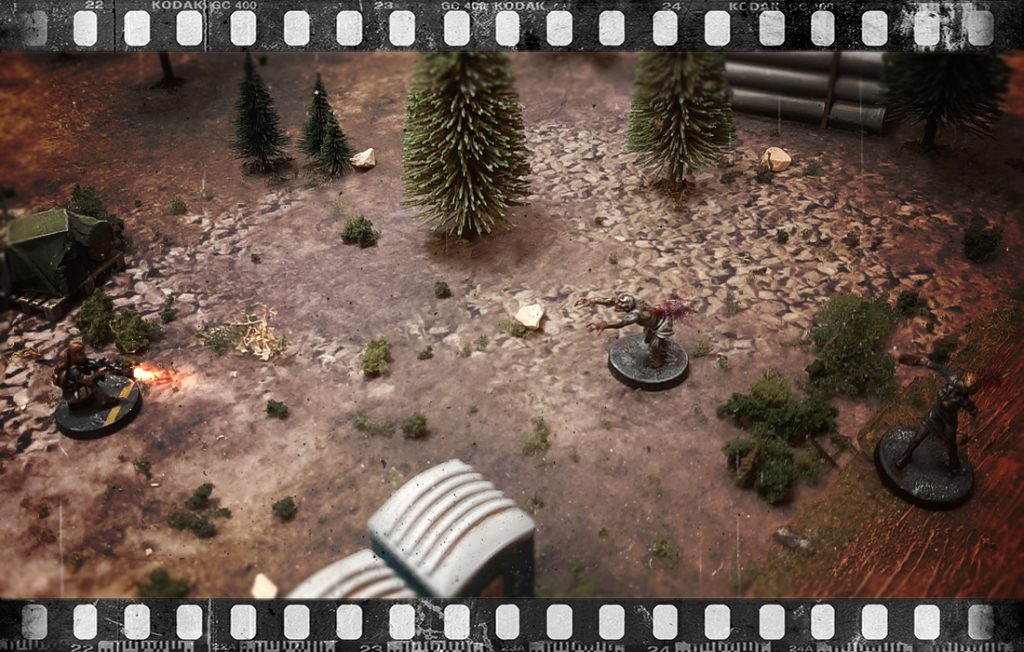 She moved into a position with a good field of fire to pretty much any direction and blasts away at zombies relentlessly to keep way back to the car open for her friends.

With all the shooting and noise going on Biff made his way back safely from the campsite. Taking a breather, he looks around to see if he’s being followed. Seems like no zombies are on his heels for now, so he takes time to search the boxes for supplies. 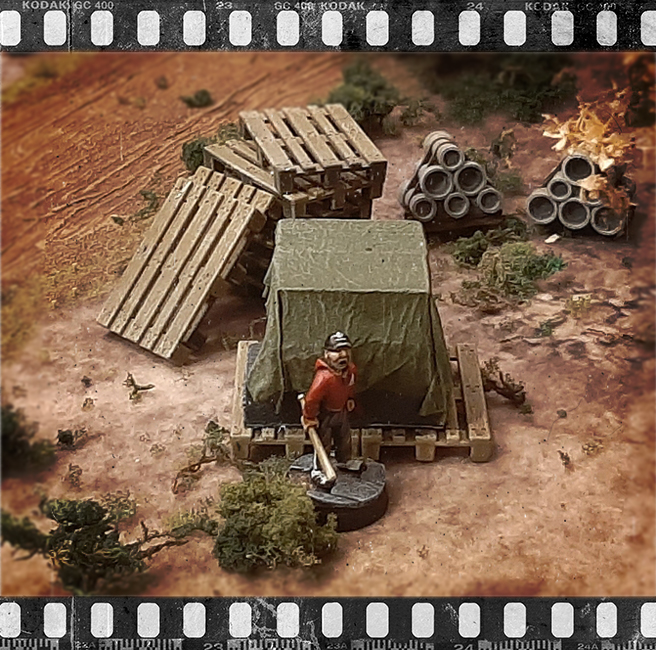 Jackpot! He finds a canister of gasoline and a pack of M&Ms (Peanut). He grabs it all and moves down the road towards the truck. Soon he’s joined by Chad, who also has to take the road (carefully avoiding the techerous porta-potties). Biff reports about the empty tents and the gas, and offers Chad some M&Ms. Instantly they bicker about Biff’s belief that differently coloured M&Ms taste different too. Chad is unwilling to even entertain the thought.

Much too late they notice the several zombies closing in from all directions. Yet another bloody melee, but Chad and Biff strike the monsters down one by one. 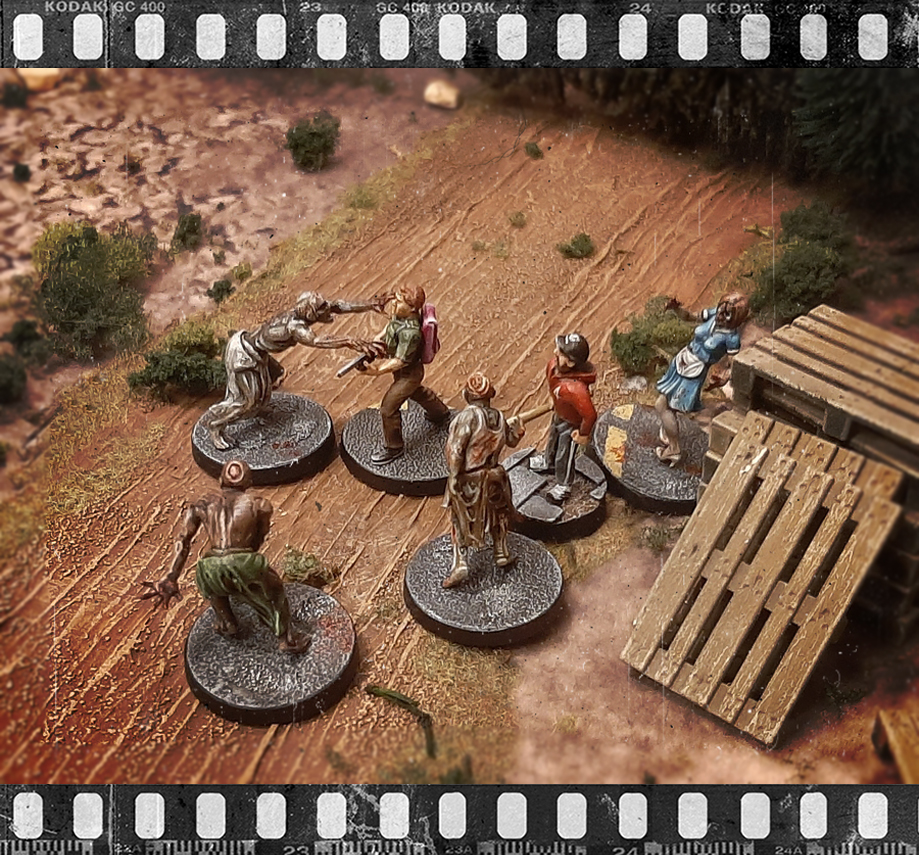 With Kim’s help the guys make it back to the truck. Chad jumps behind the steering wheel, Biff helps Kim getting in the back of the truck, and off they’re off. 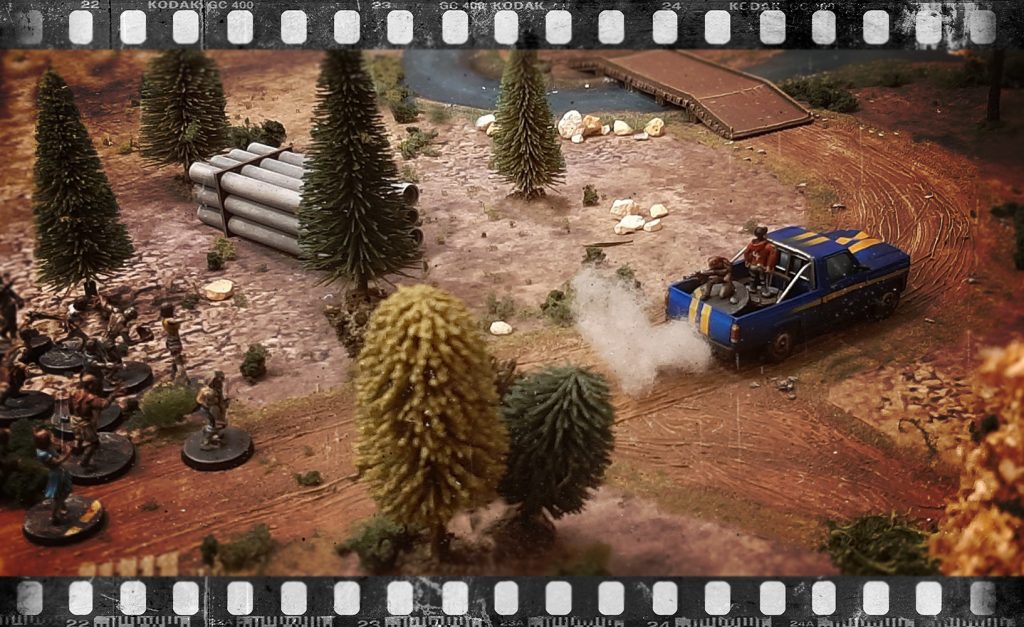 Akula’s Rules: Skirmish Edition makes for an incredibly useful  ‘skeleton’ for a fun game. There is some work left to do for the umpire and/or players in that I think that an interesting scenario and a little bit of experience on the umpire’s part are important to make the games interesting.

Speaking of scenarios and experience – pay a visit to deadlamassu’s Zombie adventures. He’s not only a gentleman, but also a complete star when it comes to using Akula’s rules for zombie gaming. He built a whole setting and added heaps of extra rules to the game, including event cards, mission cards, and several rule amendments. Highly recommended.

Overall I would say that these rules work great for multi-player games, possibly with different groups of survivors with different goals. They also work well for solo and regular co-op gaming, especially if you add random events. The key thing about solo and co-op games is randomizing stuff as much as possible. Since we lack an opposition to come up with devious plans to thwart our own, we have to introduce the random factor to replace said opposition.

It’s a quick and simple set of rules which we can built up on. The key is the activation system of course. It ensures an exciting game which keeps you guessing. Knocking down a zombie can be a great relief, but they might get up again right away if the cards work in their favor! Some might not enjoy the fact that if you’re unlucky even shambler zombies may ‘go’ several times after another. The general idea of the game is that everything happens in a panic, so things will get chaotic and time subjectively may go at weird paces.

I hope that you enjoyed the little rules introduction and the battle report, Oh, and happy Halloween! 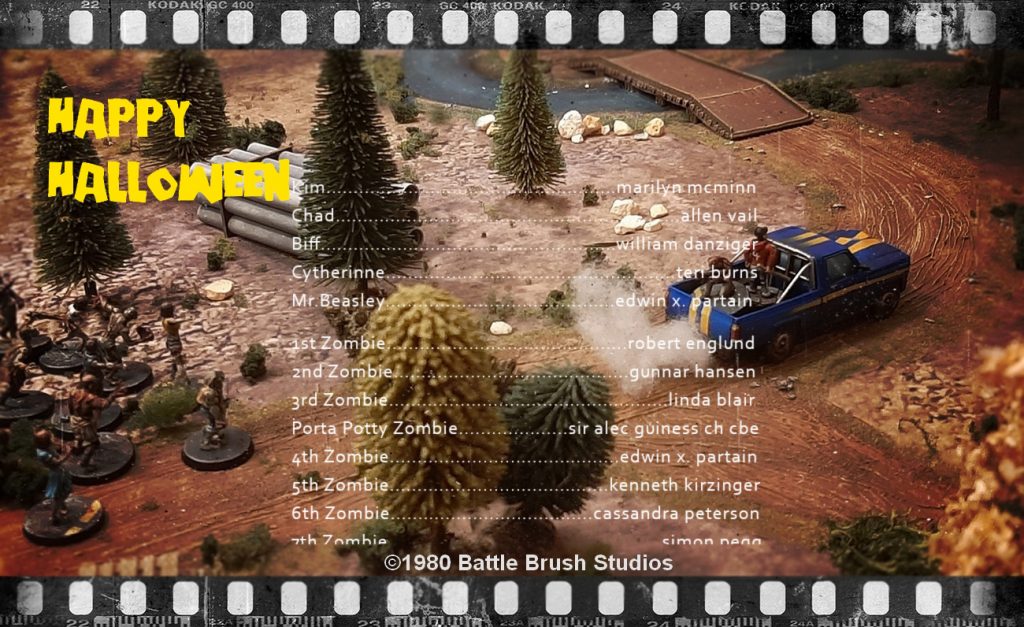