Last night we had another playtest session for What a Mecher!, our Battletech adaptation of What a Tanker!.

For the idea behind the whole project, have a look at the first playtest report. 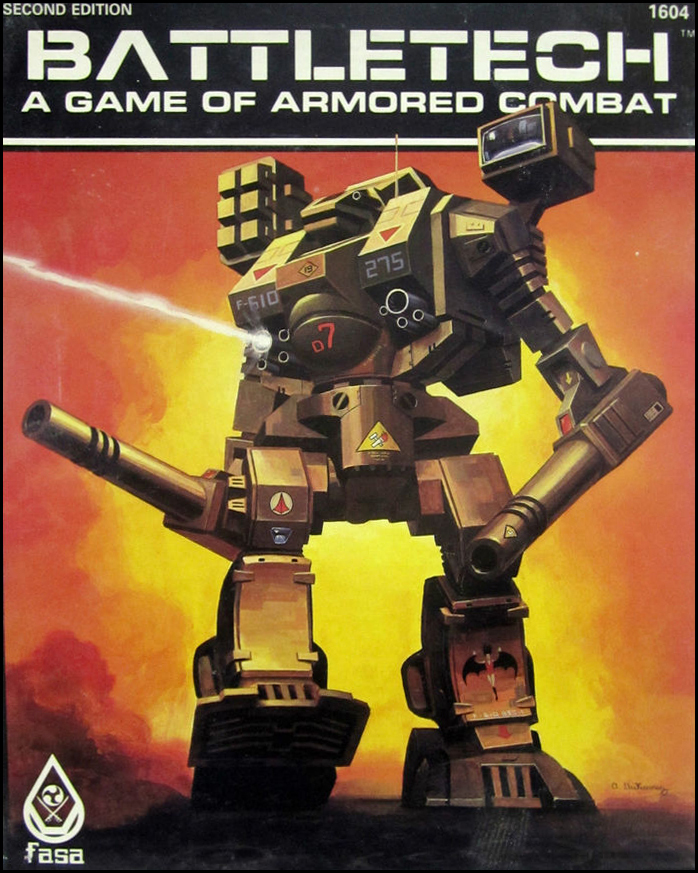 This time we played with slight changes to how shooting modifiers due to movement are worked out and a few other tweaks.

As far as the game setup we went with a 2-on-1 this time instead of a 3-man Triple Threat. I chose the Catapult for this game (because it looks like the one from the Mechwarrior 2 box, and that’s what I think of when I hear Battletech).

Virago and Cpt.Shandy teamed up on my Catapult.

This time we used a bit more terrain and even had a water feature at the centre for mechs to jump into and cool off. In the right you can see Virago’s Shadow Hawk advancing towards my glorious Catapult (currently sitting atop a mountain like a glistening, shiny, statue. A steelen ode to giant-robot-ness come to life.). In the top right you can see Cpt.Shandy’s Locust rushing along the flank. 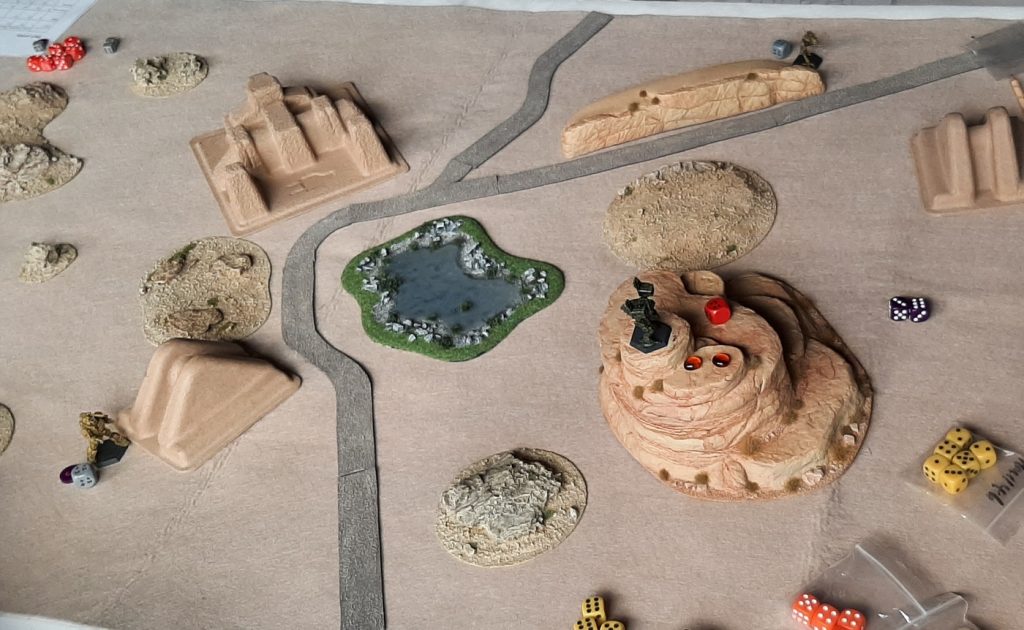 How, I hear you howl, is that Locust here when it started over there? Here’s the answer: 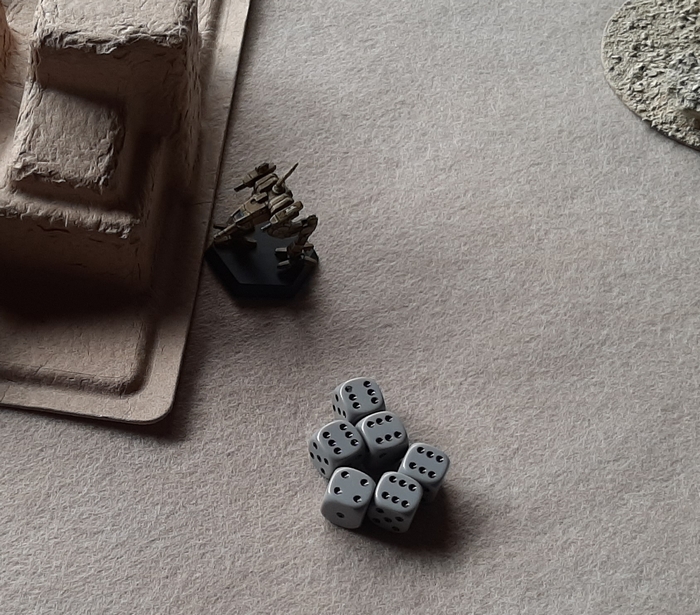 That Locust is one fast giant robot. At first we weren’t sure about that, but it calmed down a bit later on. At least for a while. I’m not entirely sure whether or not the range bands should be a bit adapted to fit the movement rates better. As mentioned before, I’ll gladly be voted the chairman of any Battletech fan club, but I know nothing about it. So I can’t really judge from how things SHOULD be, just what works in the game and what doesn’t.

Here you can see how my sexy green robot was kicked off the mesa after a salvo from the Shadow Hawk. The Locust – after a first shot at the Catapult – decides to buy time by running circles around the mesa. At this point these two made my life tricky by attacking from two sides. 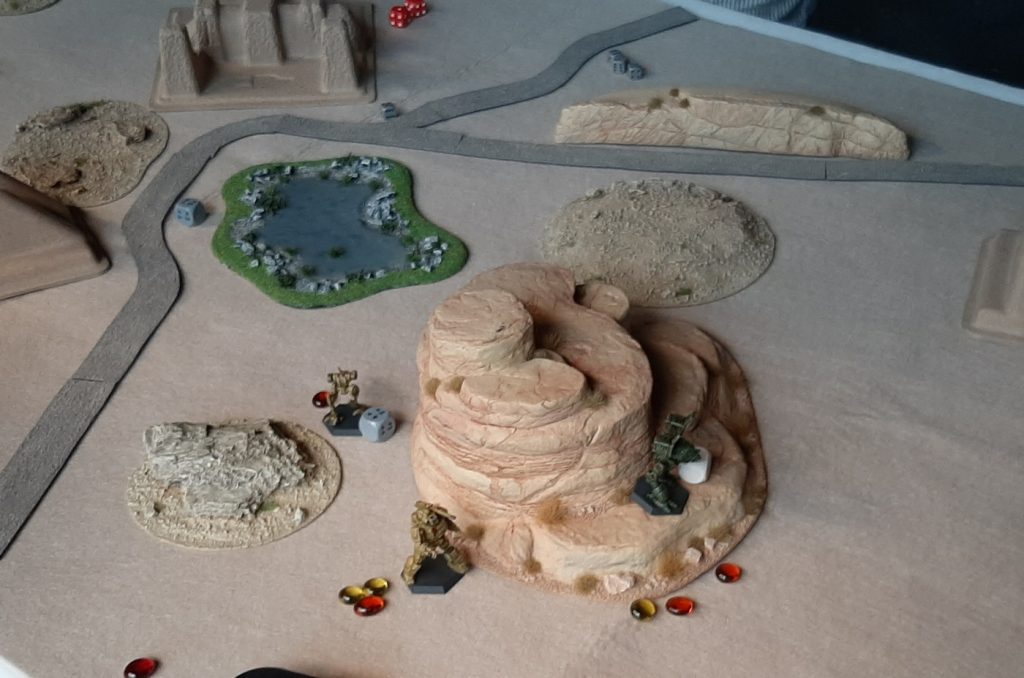 Early on, my mech takes two hits: One hit on the leg, reducing the movement rate, the other damaging the mech’s sensors (-1 to hits). Next we’ll have to modify the damage table. The one from the rulebook works pretty well without much changes so far, but some details we have to change a bit, I think.

The latter part of the game is all about that pesky Shadow Hawk trying to punch, kick, and shoot my Catapult dead. The Locust (he can’t jump, remember) sits at the foot of the mesa, firing its guns at the thick armour of the Catapult. 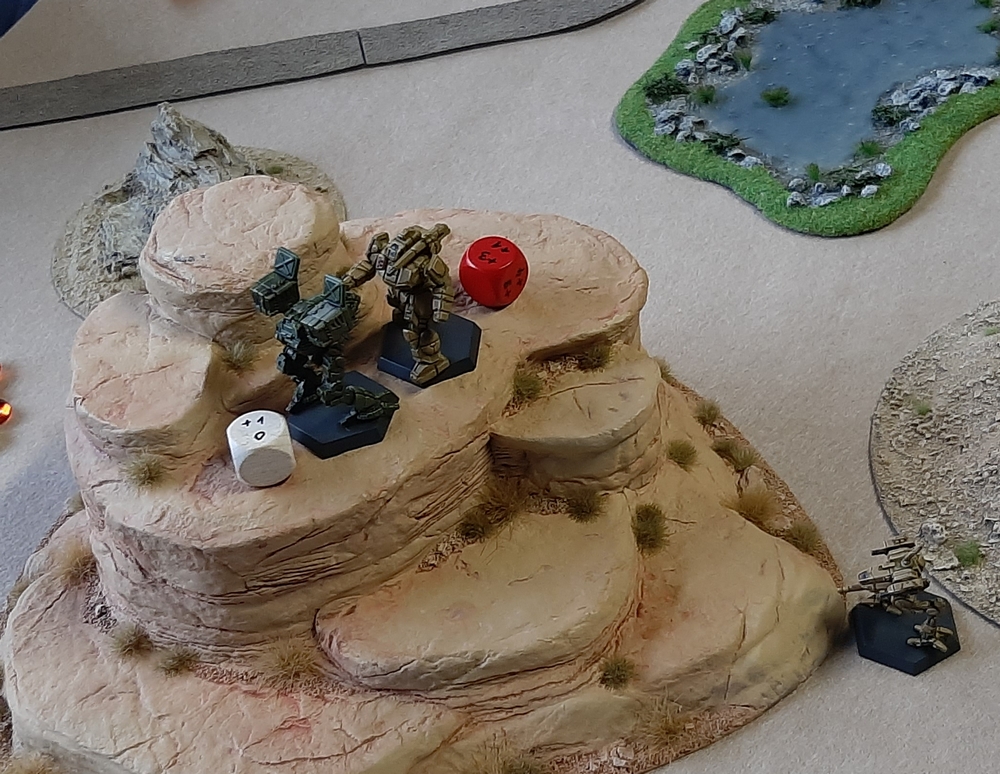 The big disadvantage of my dude is that he’s got no arms, which is bad in close combat. He does surprisingly well, but the Shadow Hawk keeps working the leg (as bad guys do) and the Catapult takes another hit to the leg.

At one point the Shadow Hawk is pushed back after a point-blank salvo, but stays on its feet (and the mesa). 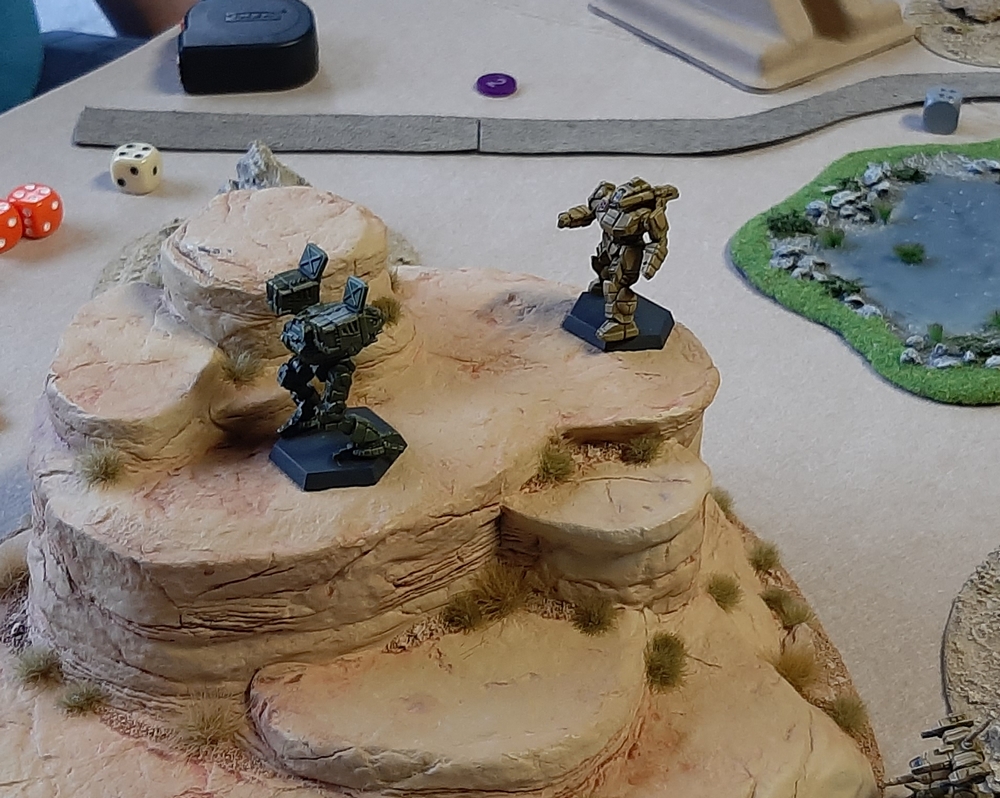 The Shadow Hawk keeps kicking mah leg and eventually the mighty Catapult falls and is kaput.

.) Yup, the thing works. The damage taken by the mechs again was rather gradual rather than one-shot kills.

.) The Locust didn’t do anything really apart from impressively showcasing its speed. I did roll well on armour rolls though (reason why my guy survived for so long in a punching contest without any arms). Of course ‘balancing’ still is a thing. At the end Cpt.Shandy suggested trying a game with one lance (that’s a squadron of mechs, I assume) per side, to better play out each mech’s tactical roles. The Catapult is a long-range support mech and of course should be supported as such and so on.

.) We may have to work on the permanent damage table a bit.

.) I think that range bands could do with a bit longer ranges on the whole, but that’s a subjective idea I’ll have to talk about to the guys.

.) The Catapult is a very pretty mech.

Well, I hope you found this second report interesting. So far the rules work really well. WaT is a strong platform to build all sorts of things onto.