Heyhey, it’s time for  Game #7 of our lovely Star of Bravery campaign! This time we’re back to Capt. Charles Benés’ adventures. Once more his force is sent to forage a Bavarian domicil for supplies. It’s a rich Bavarian Freiherr’s wine cellar this time, and thus naturally even more interesting to the French than some stinky barrels of beer.

…is very much like the scenario the last time, when we witnessed Benés’ Great Gambit (which ended up swiftly and in disaster). 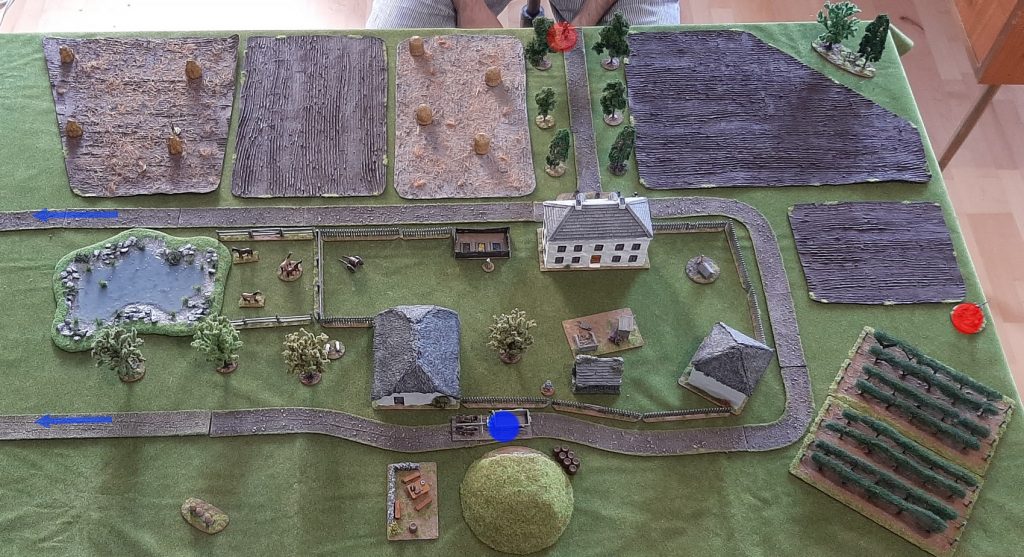 The blue plot is the forage wagon which doubles as French deployment point. On each turn end, the French player (me) rolls a die. The results are added up over time, once the total exceeds 26 the foraging parties filled the wagon and are ready to take off.  Once that’s the case they have to leave the table via one of the roads with the blue arrows. If the Austrians manage to get a group to the wagon before that they win. Also, if one side has their force morale reduced to 0, the other side wins.

Red dots denote Austrian (Cpt.Shandy) deployment points. The one in the right is the Austrian Primary Deployment Point.

2x Line Infantry Grenzers, led by a Status II leader. Notes: They can not form a formation with Landwehr units.

1x Wiener Volunteer Jägers, led by a Status I leader. Notes: They’re armed with rifles and got the Sharp Practice special rule.

1x Grenzers Skirmishers, led by a Status I leader. Notes: They’re armed with rifles and got the Sharp Practice special rule.

The game starts with Cpt.Shandy deploying Austrian skirmishers. The Wiener Volunteer Jägers go for the mansion. While the last few times typical farm buildings of the area proved not to be very useful for setting up strong points, this mansion here provides good cover, and a load of windows (and thus fields of fire) on each side. 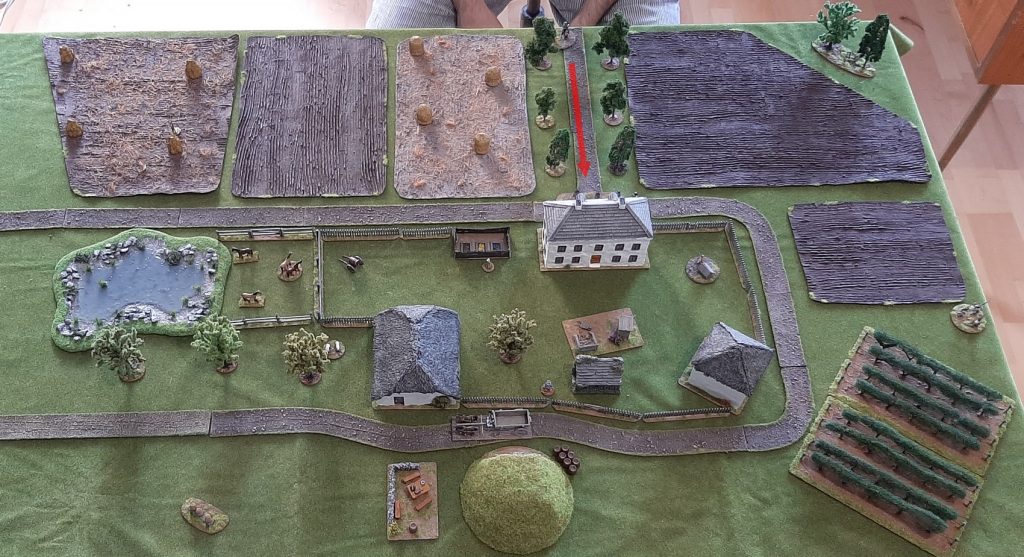 Which is why I set up Sergeant Quellet’s skirmishers in that building right away and start blasting the Austrian volunteer Jägers from the upper floor. The enemy reacts by sending in the Landwehr. They go straight for the yard next to the mansion. Immediately Capt.Benés deploys three groups of his line infantry to meet the Landwehr head on.

The Austrian line marches across the fields. Meanwhile, their French counter-parts have a slightly more difficult time navigating vegetable patches, outhouses and sheds. Capt.Benés tries to compliment a maidservant on her coolness despite the enemy being around. She gives him the cold shoulder and marches off. 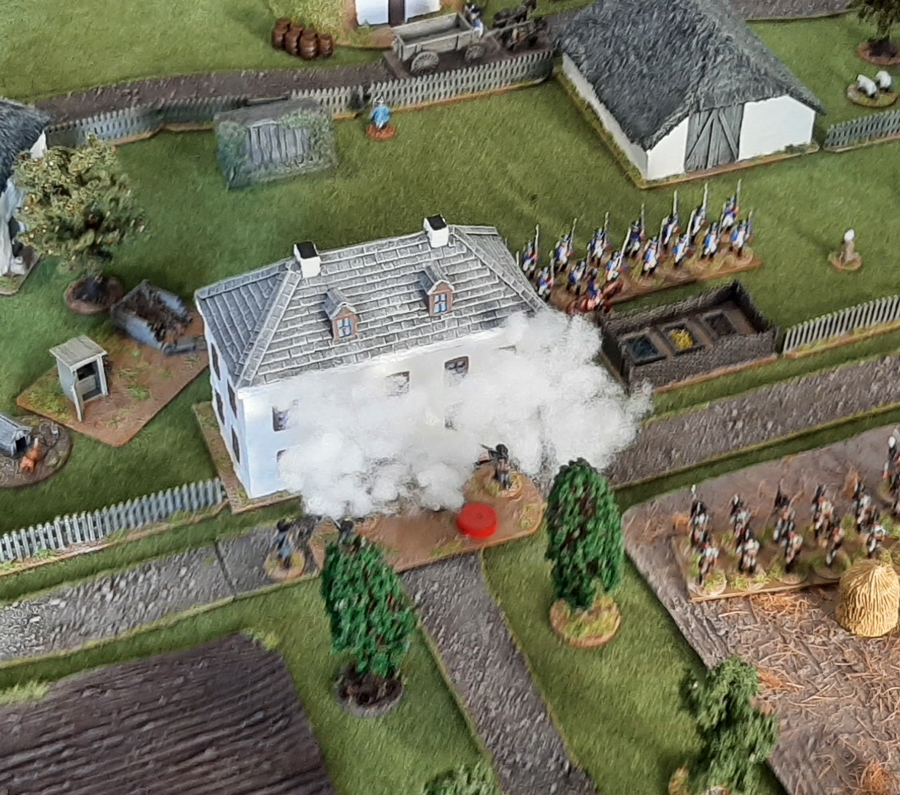 On a more positive note, the French voltigeurs in the mansion shoot the snot out of the Austrian skirmishers at the crossroads. They decide it’s better to fall back and regroup. 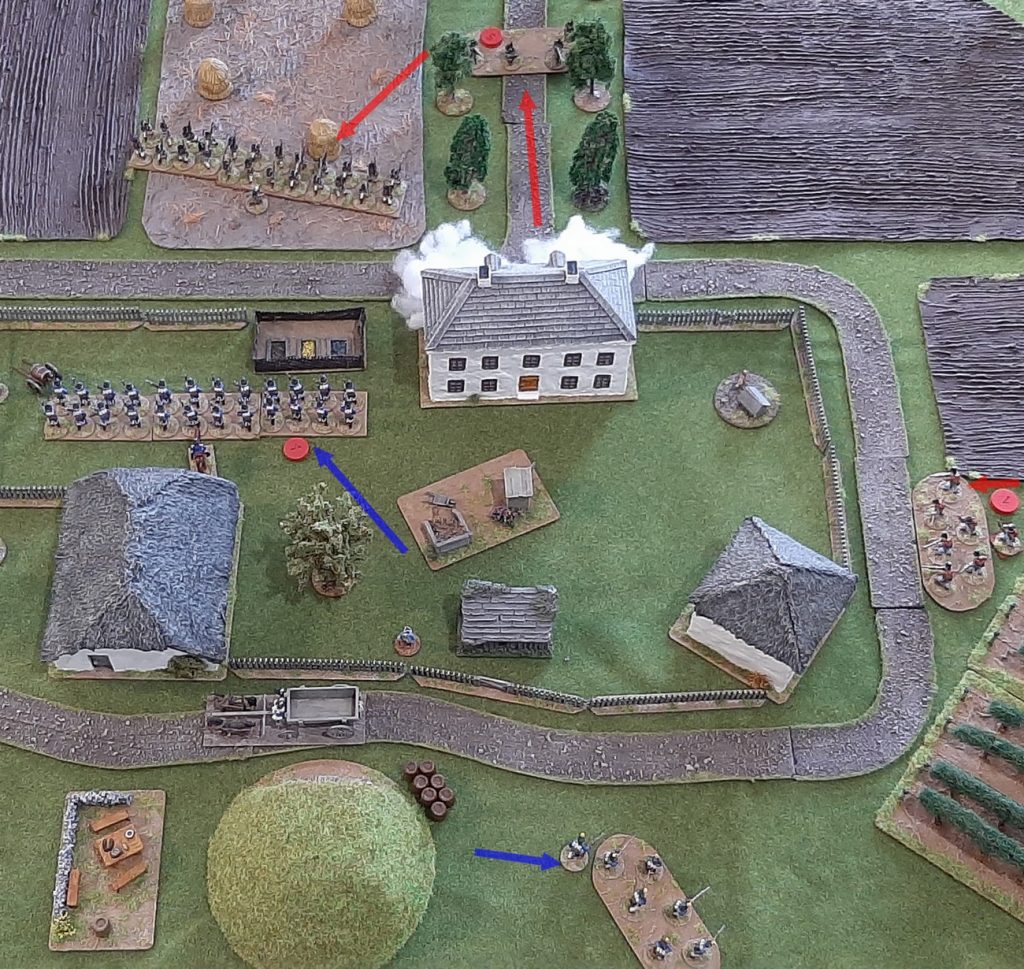 In the upper left you can see the Austrian Landwehr advancing, next to them the Austrian skirmishers retreat to regroup. At the centre left you can see my own French line advance, hoping to get into position before the enemy does. In the right a cheeky group of Austrian Grenzer skirmishers enter the fray and start firing my line in the flank. This doesn’t quite help their advance. I deploy my second group of skirmishers to keep these nasty skirmishers in check (and maybe guard the wagon. We wouldn’t want to have history repeat itself on Capt.Benés.). Luckily one of the initial salvos wounds the Grenzer skirmishers’ leader, and they have to retreat to guard their Deployment Point.

Well, the Landwehr get in position quicker and open fire. The fence gives my boys a bit of cover, but the Landwehr don’t care. Beyond the first salvo their fire and just wouldn’t stop pouring lead into the ranks of my stalwart Frenchmen. One of the groups gets dangerously close to falling out of the formation. Capt.Benés calls up his second in command, Sergeant Bonhomme, and his two infantry groups. He’s not quite sure what to do with his men though, so they stand around, trying to get an overview of the situation and await orders as they get peppered by Landwehr fire of various calibre and make. 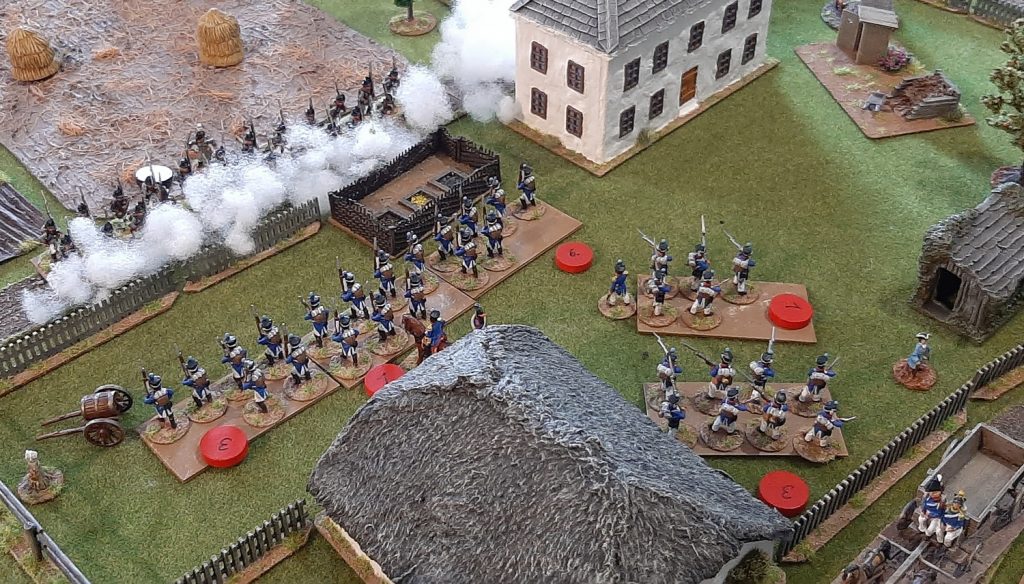 At this point I got all my troops more or less committed in the yard.

The Austrians got one more ace up their sleeve – two more groups of Grenzers in line formation. They’re deployed and make straight for my left flank. Thus they also got all their troops in the game now, but vastly more space to maneuvre. 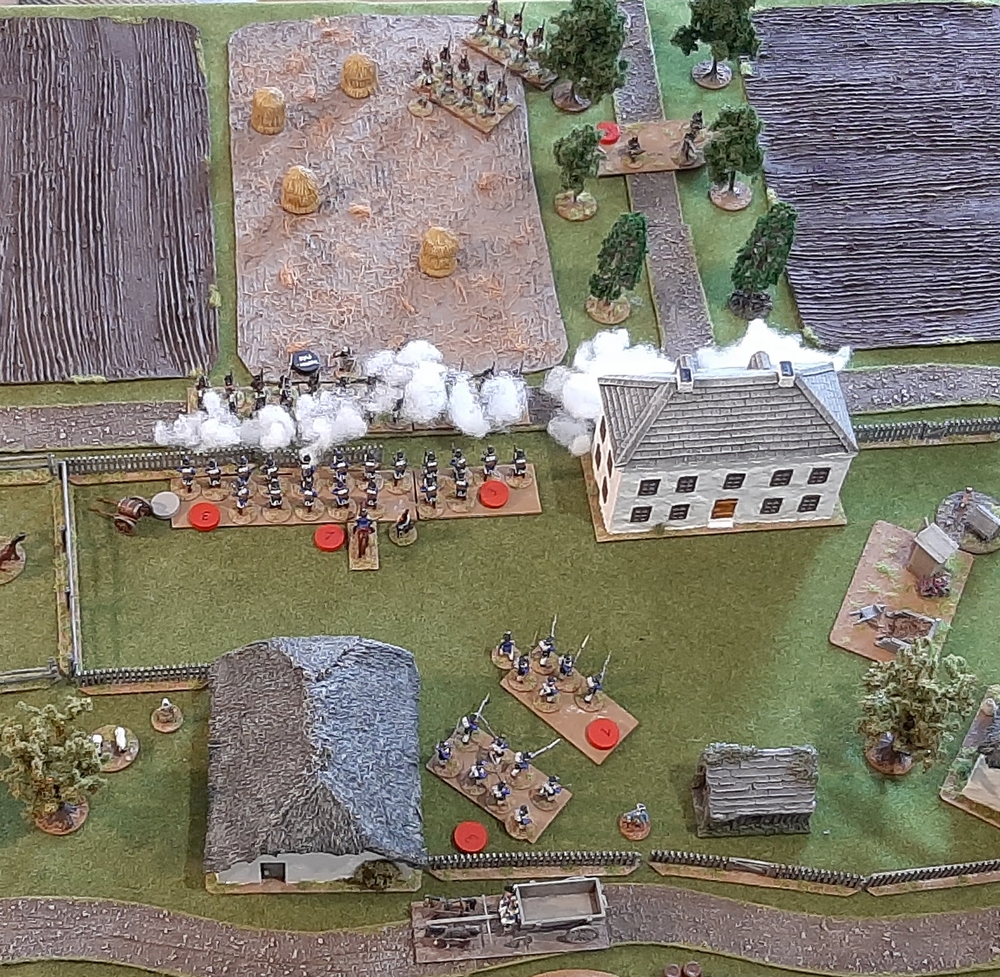 Meanwhile my fairly successful Voltigeurs in the mansion keep using the Austrian Jägers for target practice. They heap more shock points onto them, and manage to knock out their leader too! 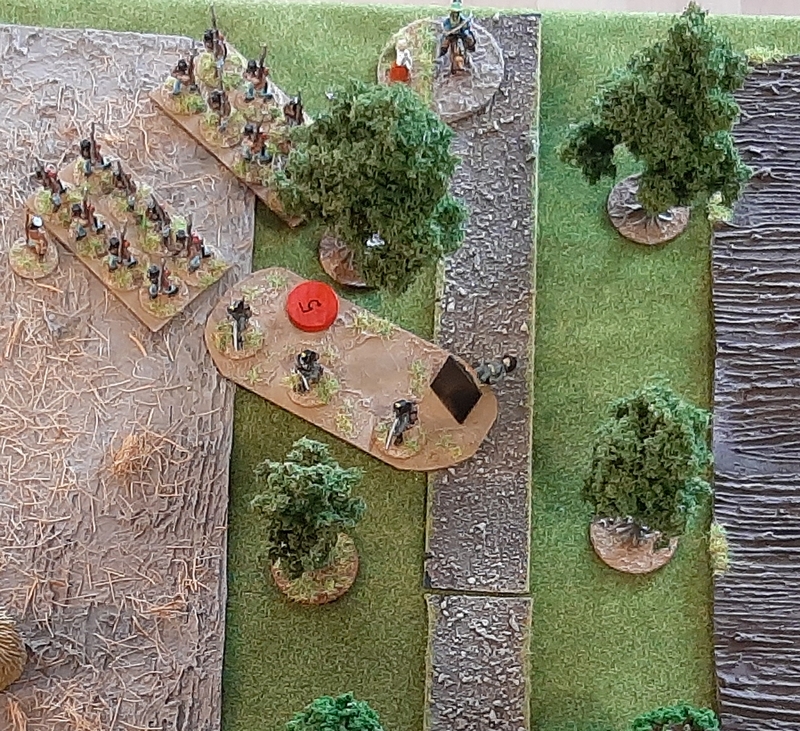 Eventually the Jägers break and leave their knocked out leader behind. In the lower left you can see the Austrian Grenzer skrimishers with the wounded leader (which of course makes activation much harder) guarding the deployment point, waiting for targets to show up. My infantry line advanced up to the fence now, but still aren’t quite ready to fire. The Landwehr at the other side of the fence show now signs of getting tired of loading and firing at my infantry.

After a little while more though the stars align, and Capt.Benés orders his men to unload a Crashing Volley against the Landwehr. From that moment on, a nasty and very bloody close-range firefight ensues between the Landwehr and Capt.Benés’ line infantry. Neither side is willing to give in though. Meanwhile, the Grenzers swiftly move further up my left flank. Their goal obviously is cutting off the forage wagon’s retreat route and to capture my poor wagon.

The upside of the Grenzers being off to my unprotected flank is that my Voltigeurs can now jump out of the mansion, zip down the road and take the knocked-out Jäger officer prisoner. 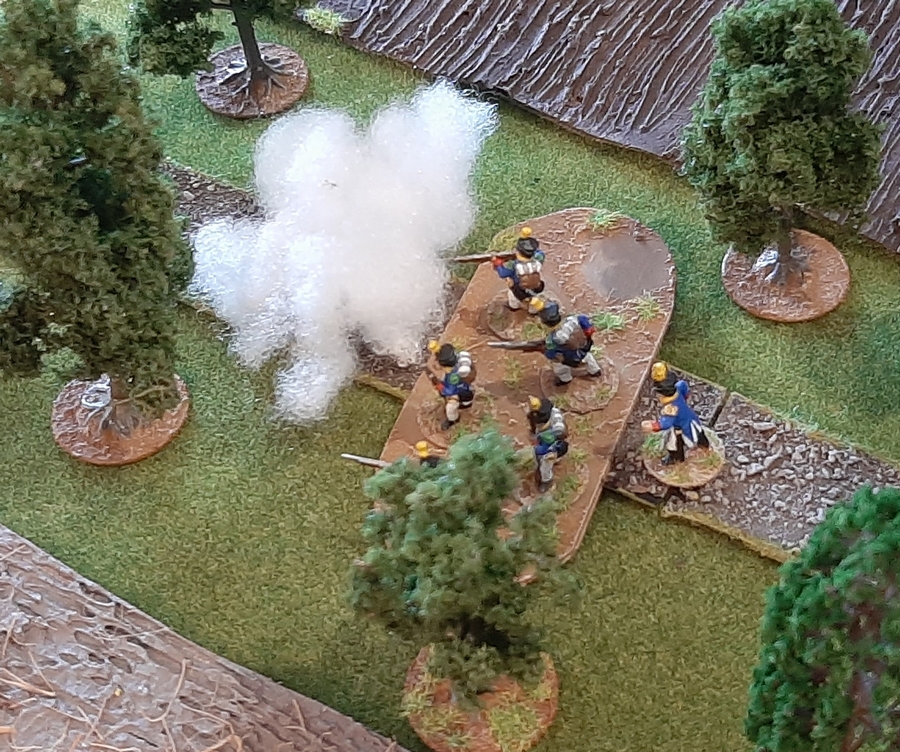 The Austrian force morale’s been suffering a bit through all of this. Slowly they’re starting to lose command cards, and now I got my voltigeurs in their back.

There are more pressing issues to take care of right now: the Grenzers are double-timing down my flank, and I don’t have anybody to stop them. Sergeant Bonhomme turns around his men in column by almost 180°. They run to reposition behind the main line, but take some shots in the flank.

Rather disshevelled and understrength, Bonhomme throws himself against the Grenzers. 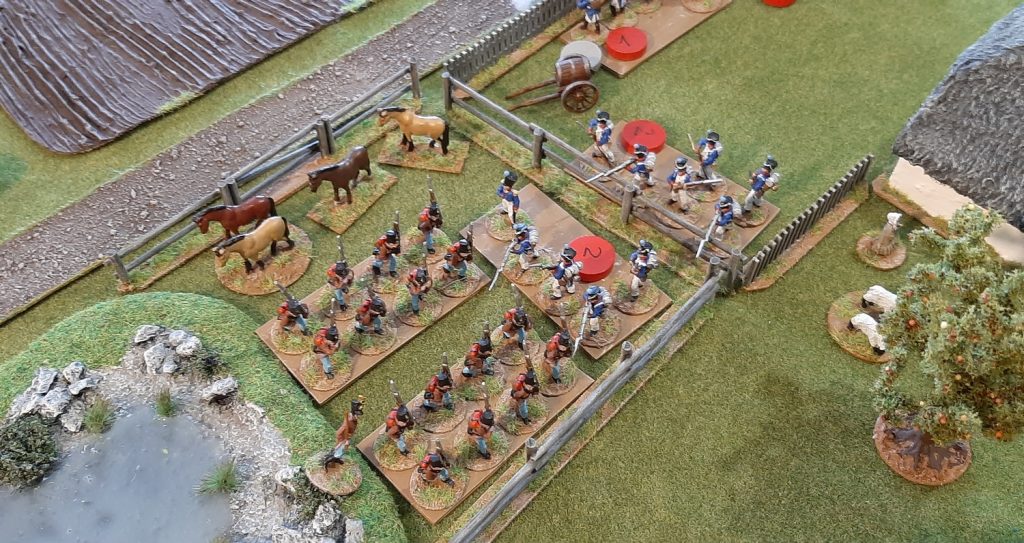 …and bounce off the Grenzers.

The Grenzers are very unimpressed by this unorderly assault, but in the ensuing mêlée, the Grenzers’ leader got wounded. That’s three of the four Austrian leaders wounded or taken prisoner. Surprising, and not good for the force morale.

And then we even get a Chapter End!

Everybody takes a breather, and we have a look at the situation. 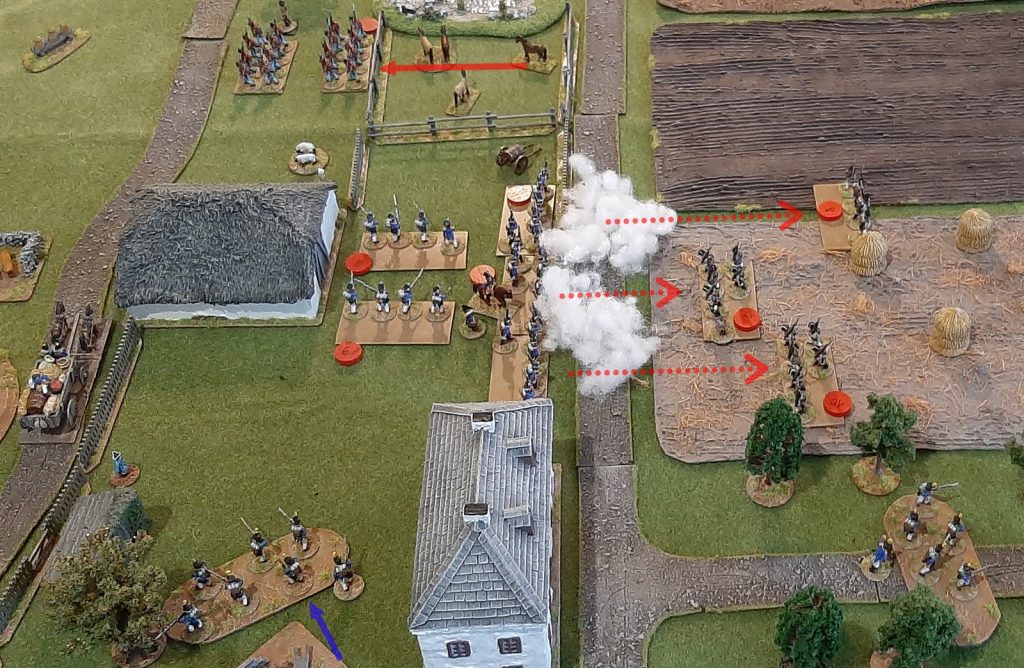 The thing is that I basically can’t stop the Grenzers from running towards my precious wagon, so I have my infantry keep on blasting at the retreating Landwehr. They retreat further/break, the Austrian force morale is reduced to 0.

Now that was tense. And close. And rather exciting. Early on my line infantry was in some trouble as the Landwehr got in some pretty nasty salvos on them, but they just held, went on, and I got lucky with command cards to deliver a Crashing Volley close-up.  Having Bonhomme and his unlucky groups in a second row weirdly helped. They stood around and took a beating without really knowing how (or where to go), but they took some of the pressure off the front line.

The most satisfying thing though, as usual, was getting rid of the Austrian skirmishers early on. While I didn’t quite manage to neutralize the ones at the Primary Deployment Point, they had a very hard time doing anything for the rest of the game. So did my other skirmishers too though.

So I finally managed to successfully grab supplies. Hooray! The little interaction with the maidservant didn’t go that well. That bad reputation Benés has with the locals doesn’t seem to go away.

Due to the successful mission and for delivering a Crashing Volley to the enemy at close range Capt.Charles Benés gains 8 Honour Points.

Upon returning to camp, Sergeant Bonhomme reports some strange going-ons to Capt.Benés: One of the traders travelling with the army was seen passing notes to a civilian messenger and acting suspicious in general. The officers start suspecting him to be a spy.

Capt.Benés has the man arrested, but refuses to send him to brigade command. His ego is a bit bloated to say the least, so the good Capitaine prefers to question the man himself. After hours of back and forth Benés has nothing, and has to let the supposed spy go. Nothing earned, nothing gained.

The next day Benés  receives a message from brigade command, ordering him to take his men to Linz for garrison duty. The town down the Danube is mainly garrisoned by our German allies, but having some proper French troops around can’t hurt. His standing would allow Benés to refuse and instead demand a front-line mission, but actually Benés is pretty content with the idea of garrison duty, resting up, and taking all the liberated wine to Linz for closer inspection.

I hope that you enjoyed the report of this very close-fought battle. Next time we’ll see how Capt.Cruchon fares in his daring rescue of lady Cäcilia von Pfünz (and his pal Merlot) from the grasp of the evil Austrians.

I strongly advise you to read Cpt.Shandy’s report of this game from an Austrian perspective here!