Heyhey, this week we played the ninth game in our campaign, and the last one before the grand final game. In this game the somewhat embittered Capt.Cruchon is set on hunting down the retreating enemy forces.

The Austrians are in full retreat towards the northern side of the Danube. Emperor Napoleon gathers his troops to force a decisive battle at the gates of Vienna.

Capt.Cruchon and his men are going after a detachment of Grenzers. They got a light field gun with them and currently work hard to get it to friendly lines. 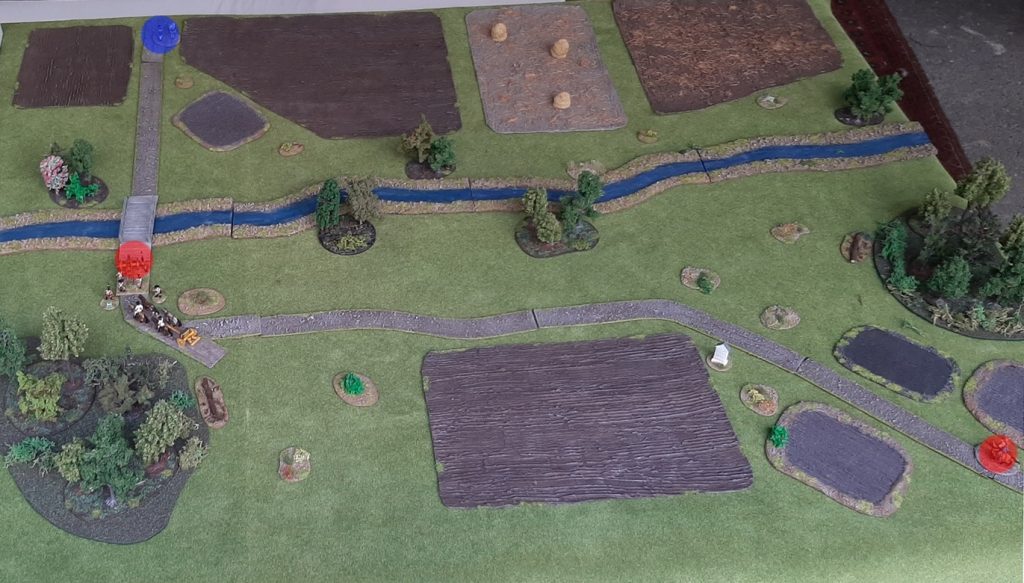 1x Voltigeur Skirmishers, led by a Sergeant (Status I) Notes: They got the Sharp Practice special rule.

1x Voltigeur Skirmishers, led by a Caporal (Status I) Notes: They got the Sharp Practice special rule.

1x Grenzer Scharfschützen, led by Korporal Gregor Kollakovich (Status I). Notes: They got the Sharp Practice special rule and are armed with rifles.

1x Medium Gun, led by Lieutenant Johann von Konnertheil (Status I) Notes: They got round shot and three canister rounds. The gun may only move and/or limber up if the enemy is within 30cm of the gun. 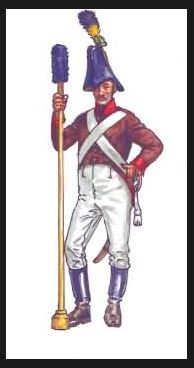 As the Austrians realize they’re being followed they unlimber the gun, load canister, and anticipate the enemy’s attack. The group of Scharfschützen takes position next to them in the cover of some brushwork along the river.

Unfazed, Capt. Cruchon has all of his men deploy in an attack column with a group of skirmishers in front, acting as a screen. 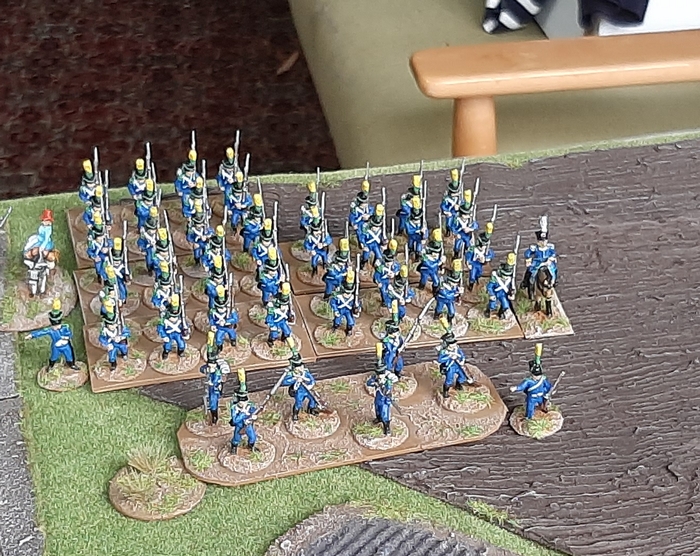 As soon as the nervous Austrian gun crew see the enemy they fire their first canister round. The hail of musket balls doesn’t even reach the attack column. It does reach the skirmishers in front though and takes its toll among the Voltigeurs.

Just as Capt.Cruchon is about to give his attack column the order to advance, no matter what these brown-coats are throwing at them they hear a cascade of tally-hos and ballyhoo-ing. Here comes the light cavalry. Sous-Lt. Bouffard , hussar at heart and ever-keen on upstaging Capt.Cruchon, leads his two groups of Chasseurs down the road and straight towards the cannon.

Things are heating up fast. As the artillery crew feverishly load another canister round, the Austrians deploy three of their four Grenzer groups. Sitting between the gun and the Scharfschützen, they open fire at the cheeky cavalrymen at close range. 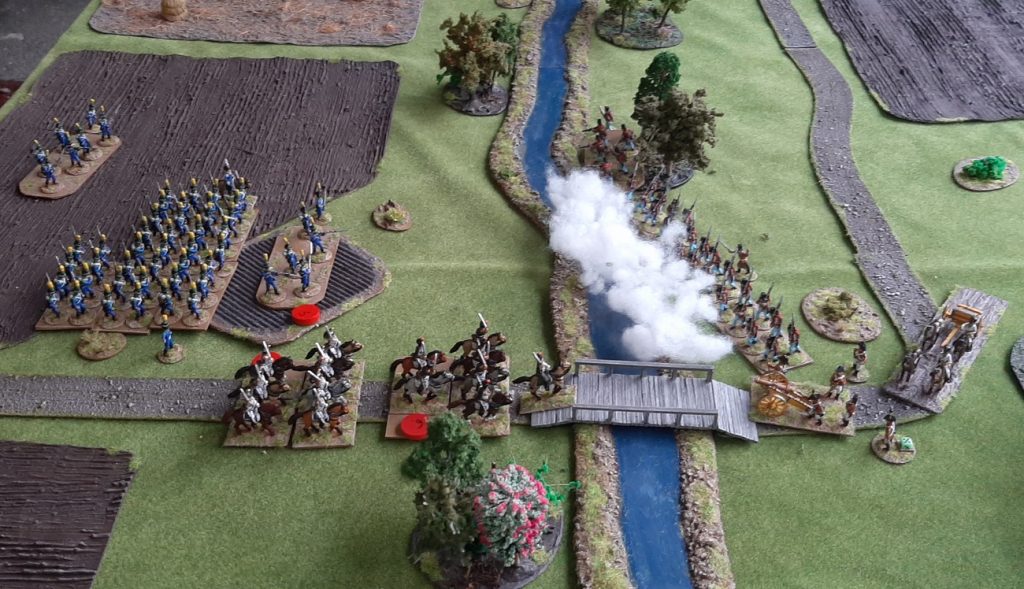 The salvo causes few casualties, but a whole lot of shock. A little shock never awed a Bouffard though, and the chasseurs gallantly charge the gun! 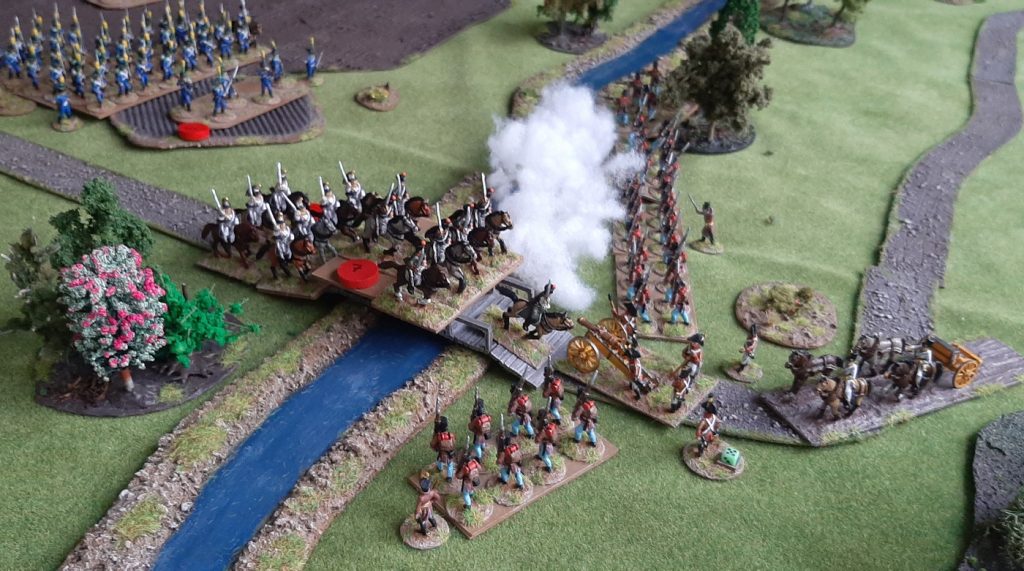 Another group of Grenzers is deployed at the other side of the gun to join the fray. During the ensuing fisticuffs Ober-Lieutenant Papuča sends his men in to defend the gun at any cost. After a hard-fought round of combat the Chasseurs are beat and the fall back to the other side of the river.

The Austrians fire some more at the weakened cavalry. Sous-Lt. Bouffard is wounded and the horsemen get decimated. Before they break and flee Capt.Cruchon steps in and starts rallying the once-dashing Chasseurs.

Meanwhile Sergeant Fougasse leads the attack column against the enemy, but the combined efforts of muskets and two more canister rounds throw the column into disarray. 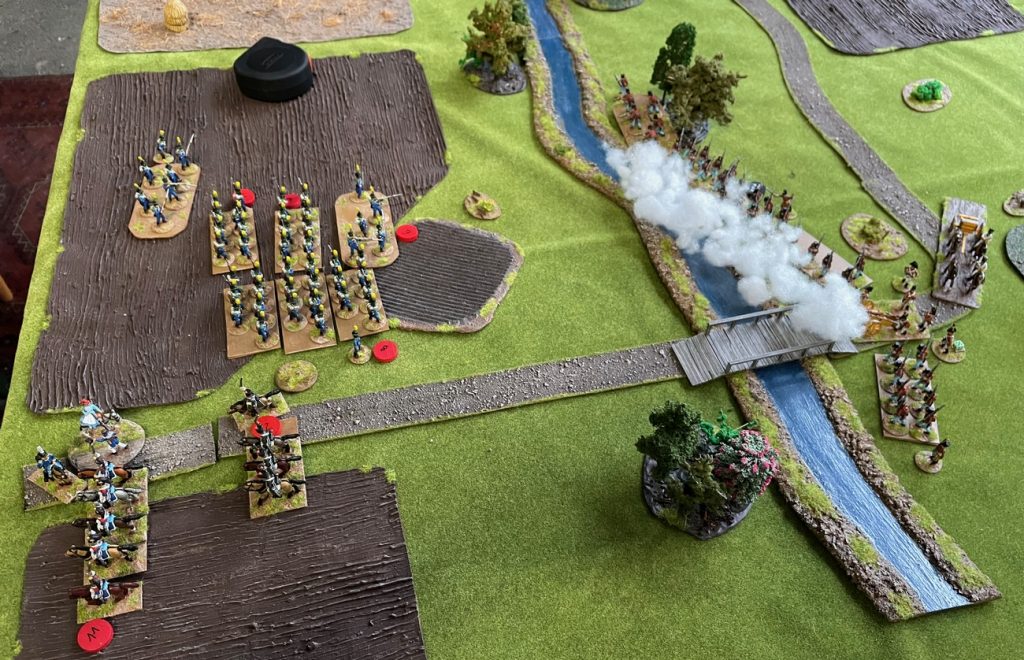 They get stuck in the fields and just can’t advance against the solid wall of lead the enemy presents. 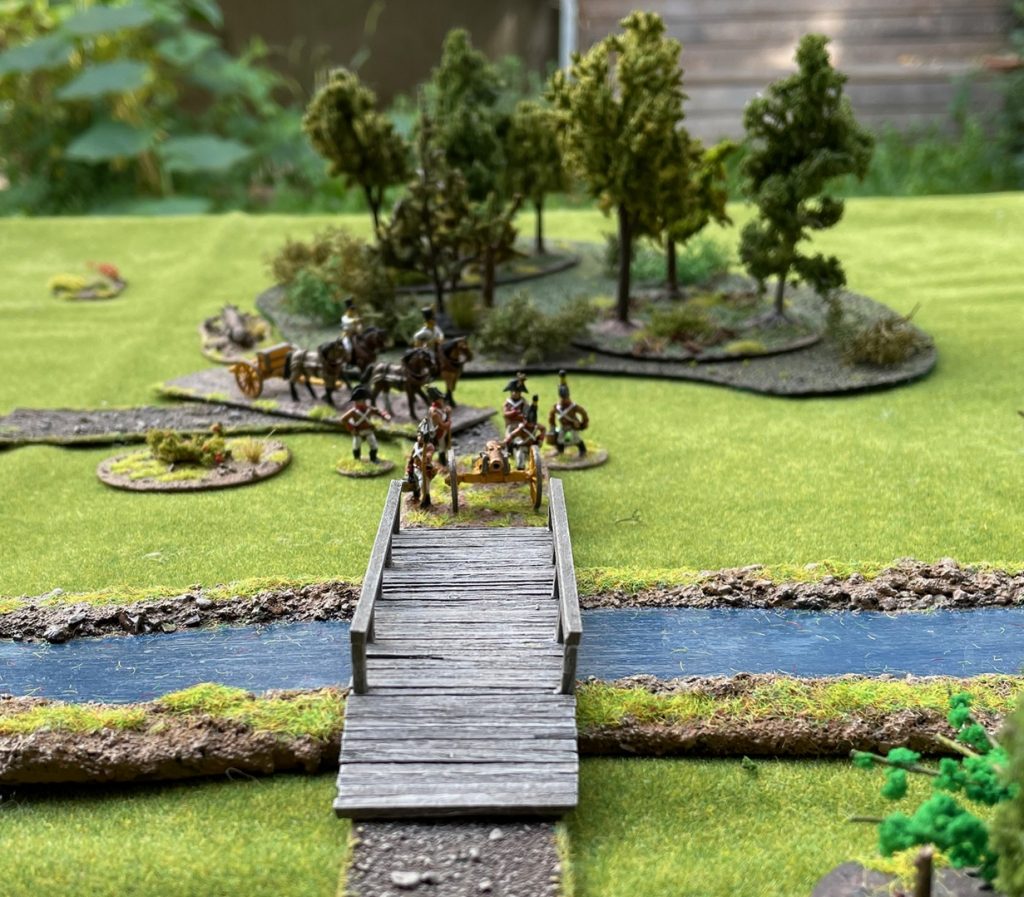 In fact, I was VERY relieved when Cpt.Shandy deployed all the cavalry right in front of the bridge. This allowed me to concentrate my forces (as the activation cards allowed for) right around that bridgehead. My main concern about the cavalry had been them zipping around down the flank and cross the river there to take the Austrian Deployment Point down the road and then proceed to do horrible things to my flank. Once the cavalry sat where they did the main goal was doing damage to the cavalry before they would be able to charge. Good thing is that I was able to do so, and the cavalry charge bounced off the cannon. It could have gone the other way just as well, and losing the cannon of course would have gotten me dangerously close to losing the game instantly.

Thankfully I did not, and the failed charge and the subsequent impossibility for the cavalry to get out of the fire did horrible things to the French Force Morale.

The French attack column I was rather intimidated by, especially of course with the skirmishers screen in front and my general tendency of being unhappy if I got fewer line units than the opponent.

A short and decisive game, which possibly showed the weird things cavalry does to our minds. Maybe it was also down to a certain ‘weapons pull’ effect the cavalry come with. Even outside of  Sharp Practice games set in the American Civil War, in which I needlessly got my cavalry killed numerous times, I experienced similar.

It was during our second Big Chain of Command game. I had my pretty battered platoon of Panzergrenadiers sit in their foxholes and a shot-up building, but then our commander sent in the Panthers. Phhhhooaaaarrr. 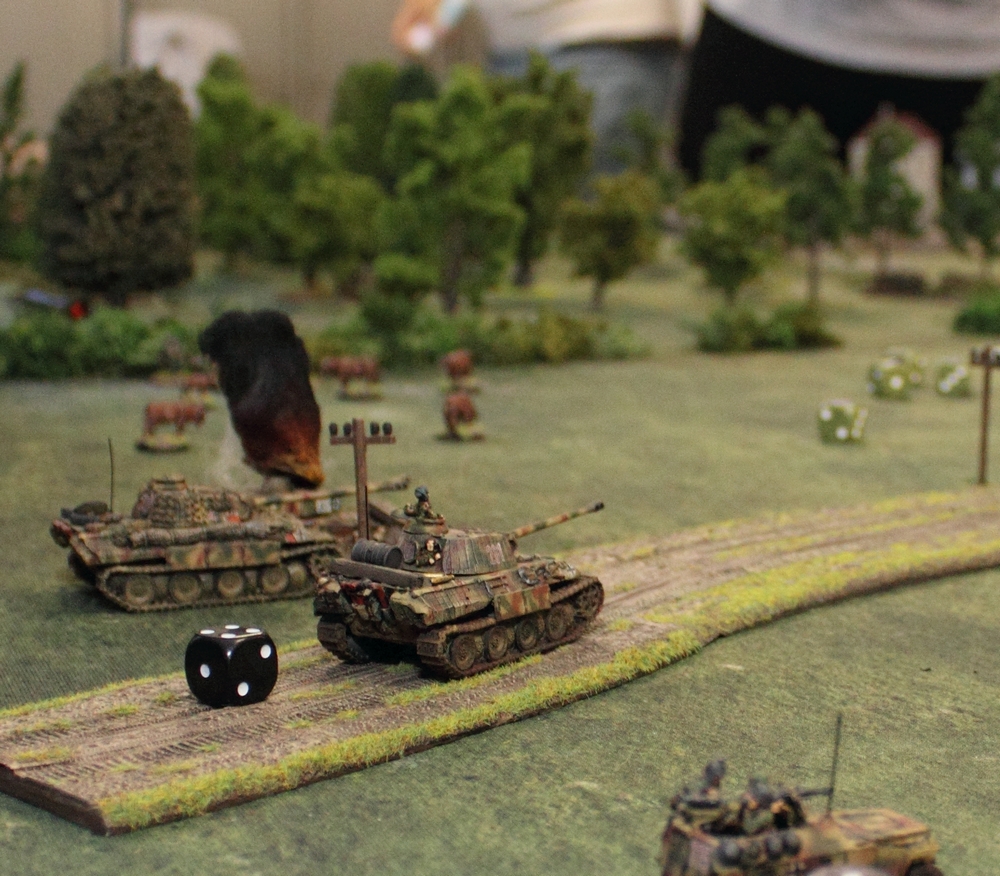 They went by my guys, and as they did I was fully willing to have them jump out of their dug-outs and run alongside the Panthers to throw the enemy out of Fontenay-Le-Pesnel (but more likely to their doom). Tanks, knights, dinosaurs. These things trigger something that makes me do silly things. Hostile tanks/knights/dinosaurs though make us act in a much more logical manner though. It’s weird.

In our game here the cavalry charge wasn’t a bad idea in itself. It could have done bad, bad things to my cannon, which pretty much was the linchpin of my game. When the situation proved not to go in the cavalry’s favour right before the first charge they had no way of getting out of the situation though.

Capt.Cruchon is steaming. Not only did Sous-Lt. Bouffard cost them the victory on this day with his reckless attack. Not only would the Kaiserlicks have another gun with them on the day of the great battle. But also: Bouffard DID upstage Capt.Cruchon, even though it was in a self-ruinous way.

Back at camp, Cruchon doesn’t want to hear any of it. He retreats to a local library to study the art of maneuver of all the emperor’s arms. The cavalry officers obviously have no idea how to use their own weapon, so Cruchon will show them how. Literary sources on the matter are manifold, but also somewhat outdated in doctrine and wording. Capt.Cruchon does not gain any ground-breaking insights in this matter.

I hope that you enjoyed this battle report. Stay tuned for the grand conclusion to the Star of Bravery campaign next week!